We're currently on a cross country road trip from New Hampshire to Oregon and posting about sites along the way. This post is about a stop in Lincoln, NE. 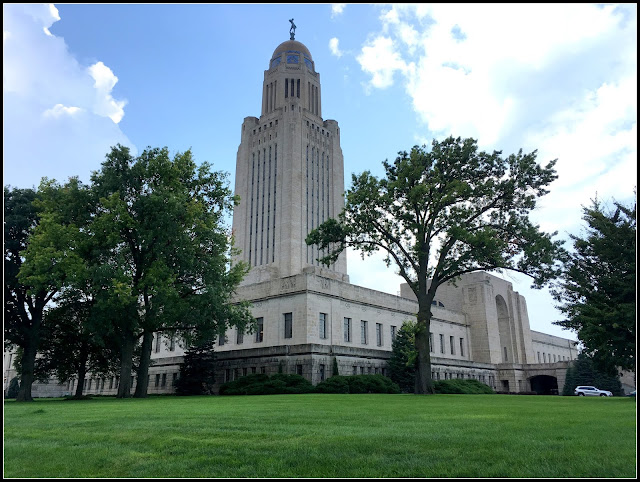 This was the most unusual state capitol we'd seen in our travels thus far — the Nebraska state capitol in Lincoln is often called the "Tower on the Plains.” Its 400-foot tower can be seen up to 20 miles away. It was the first state capitol to incorporate a functional tower into its design and it's the tallest building in the city. 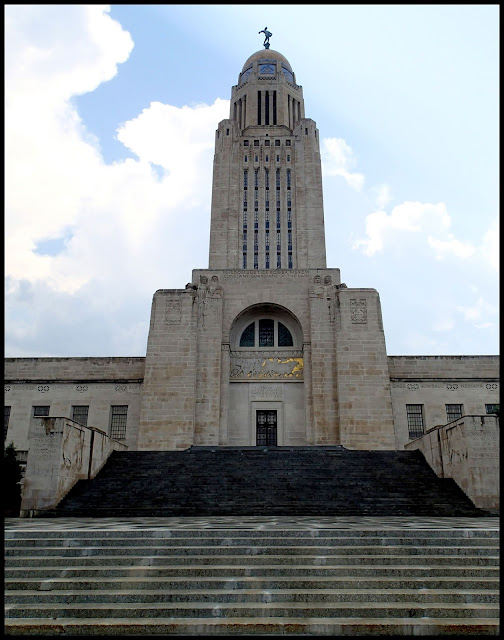 Measurements list the capitol at 400 feet, making it the second-tallest U.S. statehouse. It's beat by the Louisiana capitol which is 450 feet tall with 34 stories and is the tallest building in Baton Rouge and the seventh tallest in Louisiana. 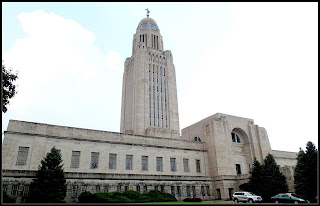 The Nebraska capitol is anchored by a three-story square base. This square base houses offices most visited by the public. The main floor (second floor) houses the office of the Governor of Nebraska, the Nebraska Supreme Court, the Nebraska Court of Appeals, and the Nebraska Legislature.

The Nebraska Legislature is the only state unicameral legislature in the U.S. In government, unicameralism is the practice of having one legislative or parliamentary chamber.
There are 15 stories in the capitol (three mezzanines exist within the tower between the third and fourth floors). The Memorial Chamber on the 14th floor is the highest publicly accessible level, has four observation decks that offer views of the city from 245 feet above ground. (Unfortunately, it had rained the morning of our visit and the observation area was closed to visitors due to possibly slippery tiles.)

The capitol was the product of a nationwide design competition won by NY architect Bertram Grosvenor. The present building, the third to be erected on this site, was the nation’s first statehouse design to radically depart from the typical form of a state capitol and to use an office tower instead. It was built in 10 years (1922-1932) in four phases. The building, furnishings, and landscaping was completed at under the planned $10 million budget and was completely paid for when completed. 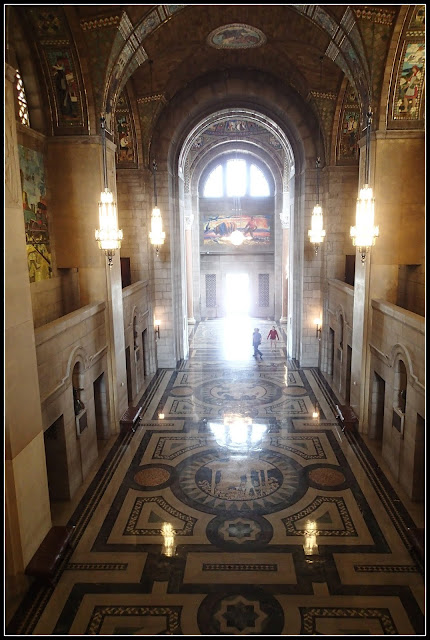 Constructed with Indiana limestone, the capitol has a low, wide base in the plan of a “cross within a square” which creates four interior courtyards. The square base is 437 feet on a side and three levels in height. The building’s exterior stone carvings represent historic events in the 3,000 year evolution of democracy. From the center of the base, a tower rises 362 feet, crowned by a gold-tiled dome with a sculpture. 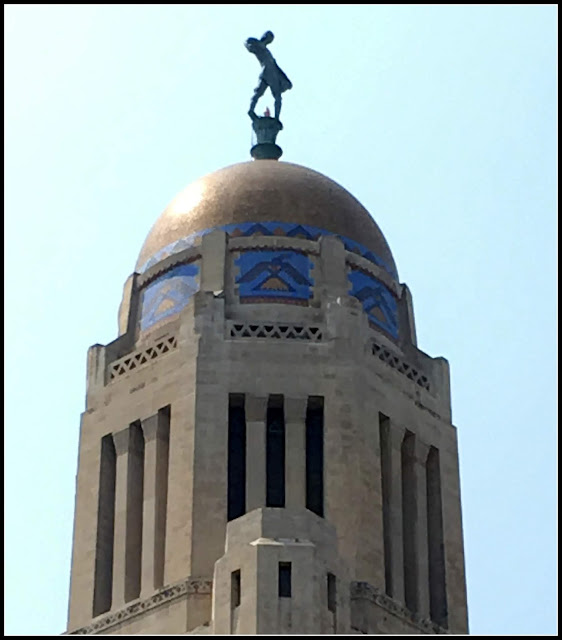 "The Sower" is a monumental sculpture on top of the 400-foot tower. This symbol of agriculture is shown as a barefoot man wearing a sun hood, shirt sleeves and pant legs rolled up as he works. The 3/8 inch thick bronze sculpture is reinforced by an interior steel framework and weighs nearly 9-1/2 tons. It was created by NY sculptor, Lee Lawrie. (His most prominent work is the 1937 free-standing bronze Atlas at Rockefeller Center in NYC.) 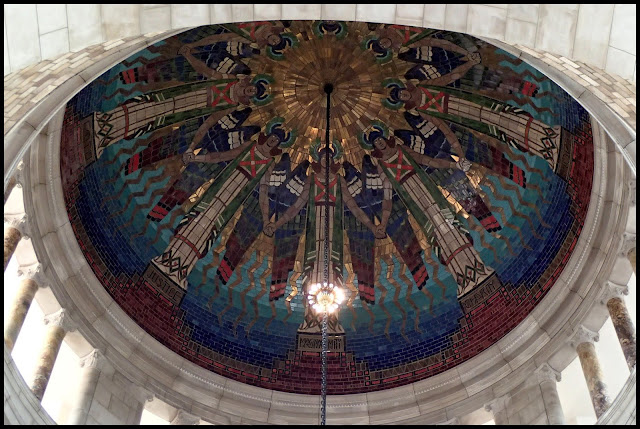 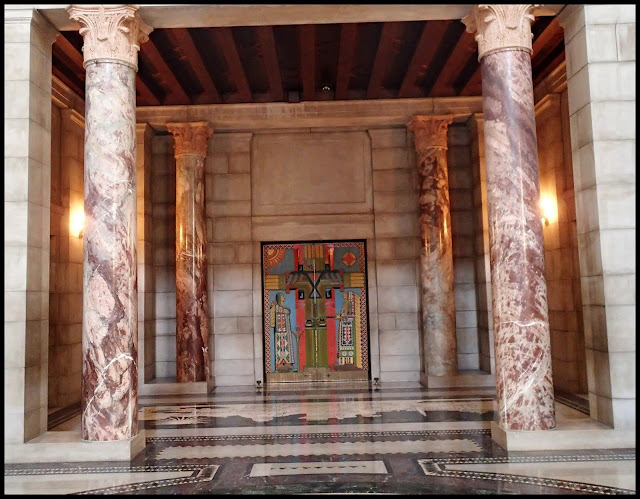 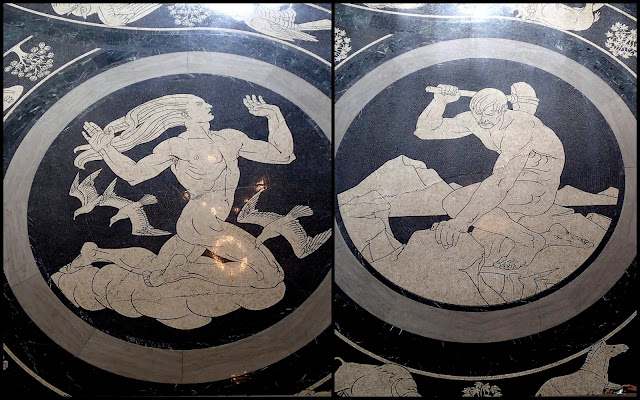 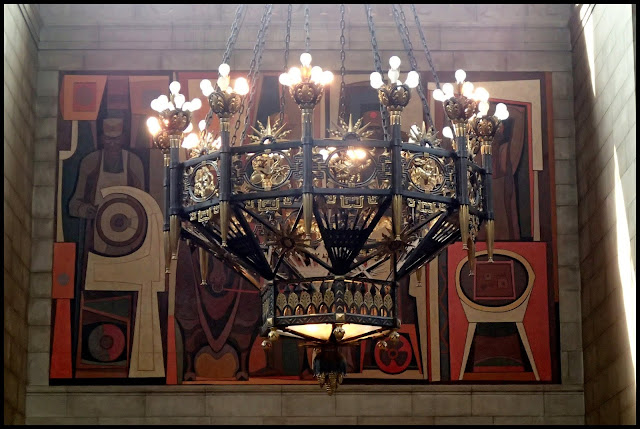 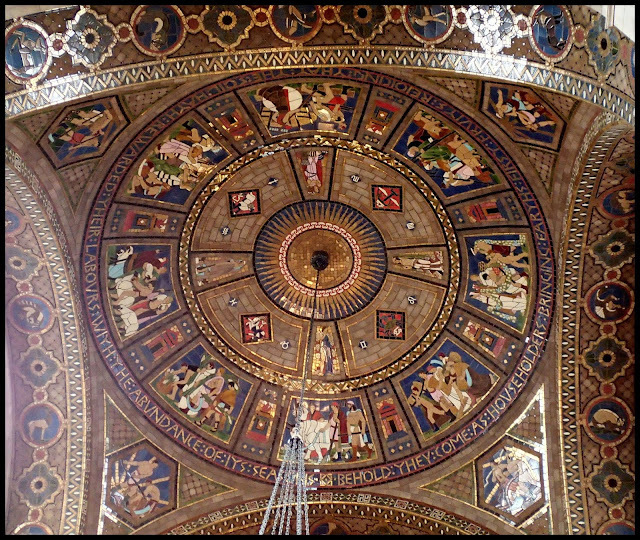 The city of Lincoln's Municipal Code places height restrictions on structures within the designated Capitol Environs District, which maintains the capitol's title as the tallest building in Lincoln. It was also the tallest building in Nebraska for many years, but is now the third. (Two Omaha buildings surpass it; the 634-foot First National Bank (2002) and the 478-foot Woodmen Tower (1969). 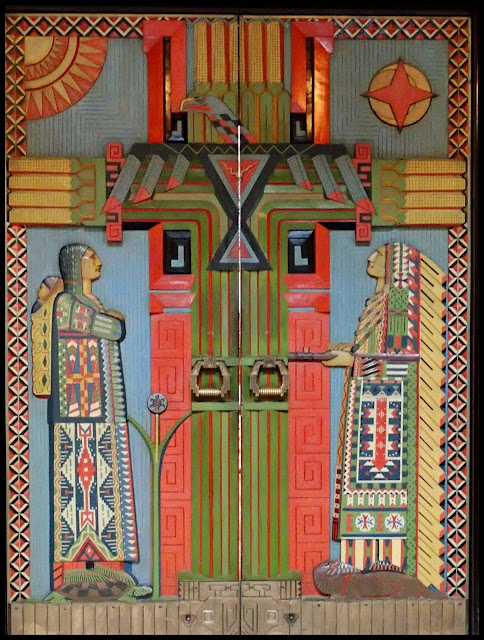 In 1976, the National Park Service designated the capitol a National Historic Landmark. The designation was extended to include the capitol grounds in 1997.

Our personal opinion was that this capitol was certainly the most unusual one we visited  in terms of architecture. However, it was our least favorite in terms of the interiors compared to previous state capitols visited in Wisconsin, Idaho, Utah, and Colorado.
Posted by Beatrice P. Boyd at 7:00 AM

Beautiful building, that's for sure. It appears to built on the plans of a church.

Well,the building could be summed up in two words: impressive, stunning.

Unusual to say the least, but I agree on not being as great inside as some of the others you have visited on this trip.

Striking buildings, that's for sure.

not only is it very tall, it is very colorful also.. did not know about the tallest state buildings. my head is croweded with trivia I wish I could remember. I just came from a blog that advised us bumblebees sleep in flowers.. wow.

Nebraska is probably less flamboyant than a lot of the places you have seen. For the most part we are more basic in the way we live. You showed the Capitol Building Beautifully.

Quite different from the previous buildings you've visited, but it is a beauty.

Quite a unique building! It is colorful inside.

Hello, traveling lady! I went back through many of your posts..........how wonderful it all looks and sounds! You keep having fun and stay safe out there!

I really like this state capital. It has a cool look-like art deco with a western flare. I really like the details.Hope the road is being kind to you. Hugs-Erika

It's amazing. I'm loving this adventure of yours.

Now I know more about what I missed last summer when I drove to Lincoln to visit my great niece who works at Senator Sasse's office. At least I saw the building from outside, but thanks for sharing the inside information :)