While on a cross country road trip from New Hampshire to Oregon, we're sampling foods along the way. (Eating out while traveling is calorie-free, isn't it?)  Here's a sampling of places we've tried in OR, NV, and UT.

Prince Puckler’s Gourmet Ice Cream is a local, family owned business that's been dishing up homemade treats in Eugene, OR since 1975. This gourmet ice cream and coffee shop has gained quite a reputation and is located a few blocks from the University of Oregon. Knowing our fondness for all things ice cream, Nancy and Thomas, our Oregon friends treated us (and so we couldn't say no).

All the ice cream flavors are handmade daily by the owner and his daughter in a nearby warehouse, then shipped to the store in five-gallon containers. The shop’s inside is simple and classic with a counter and tubs of the various flavors and sampling is allowed, because it can be so difficult to choice. My selection was a chocolate malt flavor and Grenville had mocha expresso chip, which is one of his standard favorites. 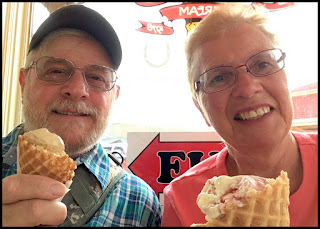 There’s over 40 flavors to choose from. Picking one is a tough decision, but we managed to select a chocolate malt (for me) and mocha cappuccino for Grenville.

Thomas and Nancy remember bringing their now grown children here. It was a one-time visit for us, as it's too far to return.

Nibbley’s Cafe in Klamath Falls, OR, has a slogan “When a nibble just isn’t enough." This local favorite has been in the area over 40 years since it opened in the 1970’s. It’s also relocated four times and its loyal customers always return. The interior is a relaxed, old-fashioned looking environment. The extensive menu features American-style meals and homemade desserts. Walls are adorned with a collection of quilts. The cafe is known for both its food and homemade desserts.

Entering the dining area, you're "forced" to walk pass cases filled with treats that can be difficult to pass up. We were there in mid-morning. My choice was a loaded oatmeal. Grenville ordered coffee and a homemade cinnamon roll. He didn’t count on it being so large as it filled the entire serving plate.

Unfortunately, we forgot to take a photo before he was half-way through eating the treat, which he wasn't able to finish. So, here's some of the homemade treats we bypassed. 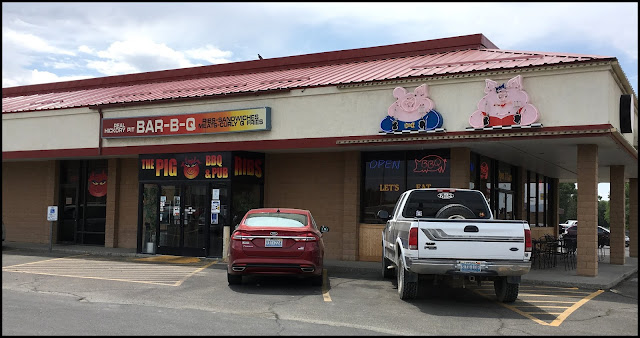 The Pig BBQ & Pub in Winnemucca NV, was a lunch time stop on our way to Salt Lake City, UT. We saw it on advertised an interstate billboard and since we were hungry and needed a rest and gasoline stop, it was perfect timing.

Since Winnemucca is located just off a busy Interstate in a small dessert town in northern NV, it has many national chain eateries. We prefer eating in a local place whenever possible and lucked out here. The Pig BBQ & Pub opened 6 years ago and is already one of the town’s busiest eateries with four smokers operating daily. The building it’s in was built 23 years ago and began as a bank, then was a law office. House craft beer is made by a Bend, OR brewer.

Our mutual choice from the extensive selection of ribs and sandwiches was a pulled pork sandwich with the house sauce. We  had it “Memphis style” which means the coleslaw is added on top of the sandwich. A roll of paper towels is provided on each table and is definitely needed. You can't be very neat when eating pulled pork. Every table also has a selection of sauces (hot, spicy, sweet, tart). Try one or all, and FYI the hot one is very HOT. 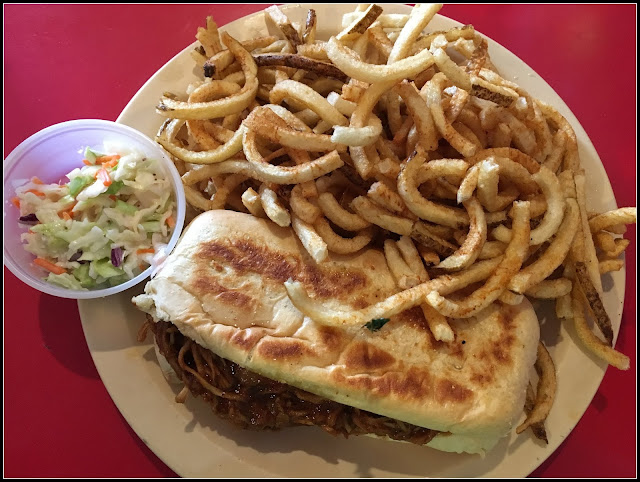 What's a pulled pork sandwich without fries, only here you ask for "pig tails" and these curly fries are also homemade. And, you do get way too many! 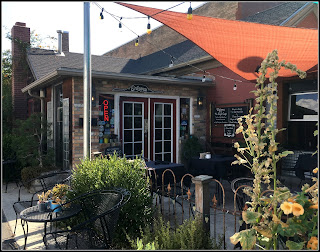 The Tin Angel Café in Salt Lake City, UT, is one of a kind. It was the recommendation of the hotel front desk and within easy walking distance too. It’s eclectic and comfortable and extensively decorated with a collection of treasures and some unusual local art.

The menu here focuses on high-quality, locally-sourced ingredients. It's housed in a converted 19th-century house with an enclosed dining room, that opens onto a patio. It's been attracting downtown diners and visitors since 2007.

While it's a casual dining establishment, prices are moderate to slightly more so. If you’re hungry now, there’s no need to read further. 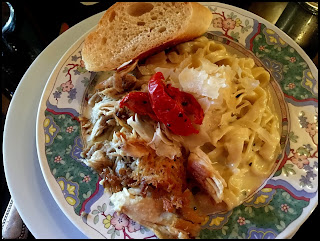 My entree was Sage, Artichoke and Roasted Chicken Pasta with slow roasted chicken and fettuccine in a white wine, sage, and garlic cream sauce, roasted tomatoes and artichokes (see photo).

These were some highlights of a few places we enjoyed during the fourth and fifth weeks of our cross country travels. There's (lots) more to come.
Posted by Beatrice P. Boyd at 7:00 AM

You are certainly having very nice treats on your drive across America. All part of the experience that makes road-tripping as fun as it is.

Wonderful places to enjoy, with all kinds of different foods and treats.

I have one question? are your clothes tighter after all this long trip of restaurant eating?

All the food looks so good although I am not a big fan of curly fries.

All these wonderful treats that I wouldn't be able to resist. Sadly I would have put on pounds...

They all look very tempting. I've been to Nibbley's Cafe, we lived in Klamath Falls for five years. Hope you two had a wonderful anniversary.

Reading about the establishments Prince Puckler and Nibbley’s Cafe and then seeing the dinner menu has me yearning for food. Enjoyed reading about this trip.

Boy you are sure eating some good food on this trip. I wouldn't be able to decide which pie to try. And the pork looks yummy too. No, it all looks yummy. Hugs-Erika

Everything looks so good, but those baked goods in the case catch my eye the most!