We're currently on a cross country road trip from New Hampshire to Oregon and posting about sites along the way. This post is about a stop in Morrison, CO. 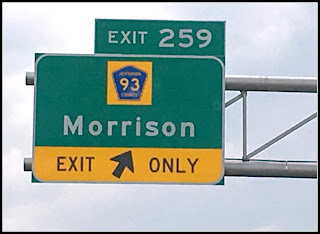 The Red Rocks Amphitheatre in Morrison, CO, 10 miles west of Denver, gives a whole new meaning to the term “classic rock.” This place really rocks, both geologically and musically. It's a pity we were not able to attend a performance here.

At 6,450 feet above sea level, the 738-acre Red Rocks Park is a transitional zone where the Great Plains meet the Rocky Mountains. The natural amphitheatre of Red Rocks was formed over 200 million years.

The area that Red Rocks now includes was once an ocean floor many, many years ago. Gradual earth movement slowly raised great sandstone ledges from the prehistoric ocean floor, to form the "walls" of the amphitheater. The walls of the amphitheatre contain records dating back to the Jurassic period of 160 million years ago. Nearby dinosaur tracks have been discovered as well as fossil fragments of the 40-foot sea serpent Plesiosaur. 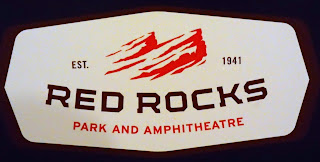 Amphitheatre is the Canadian and British spelling of the word; however it's part of the Red Rocks official name. The amphitheatre was was modeled after the Theatre of Dionysus (amphi is around in Greek). The Roman Colosseum is an early example of an amphitheater, as is the present-day Hollywood Bowl. The U.S. spelling is amphitheater. 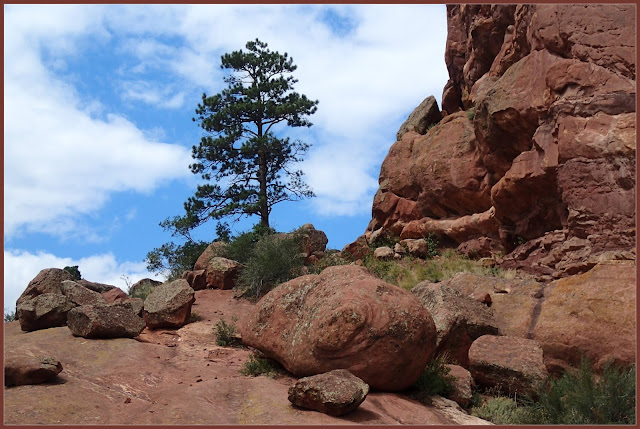 Red Rocks is a geologically formed, open-air concert venue not duplicated anywhere else. With Mother Nature as the architect, the design of the amphitheatre consists of two, 300-foot monoliths, Ship Rock and Creation Rock, which provide a perfect acoustic backdrop for any performance. Both of these monoliths are taller than Niagara Falls and almost as tall as Big Ben in London. 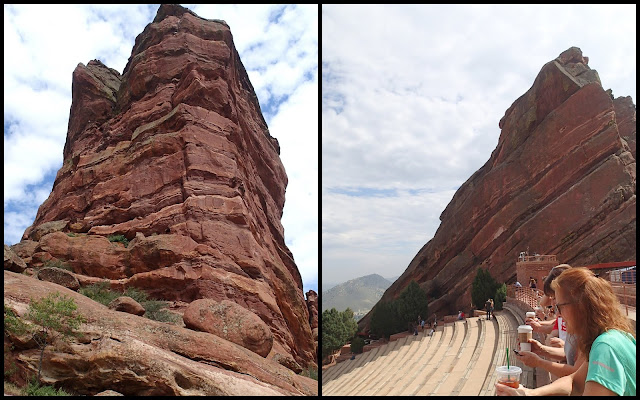 Red Rocks is a part of the Fountain Formation, a thick stripe of pink sedimentary rocks that stretch along the Front Range’s eastern edge. These colorful rocks form Balanced Rock in Colorado Springs’ Garden of the Gods and Boulder’s fabulous Flatirons.

The area of Red Rocks, originally known as the Garden of Angels (1870s-1906) has attracted the attention of musical performers since the early 1900’s. Entrepreneur John Brisben Walker, called it Garden of the Titans (1906-1928) and envisioned artists performing on a stage nestled into the acoustic surroundings of Red Rocks. He produced a number of concerts between 1906 and 1910 on a temporary platform, and so began the history of Red Rocks as an outdoor entertainment center. 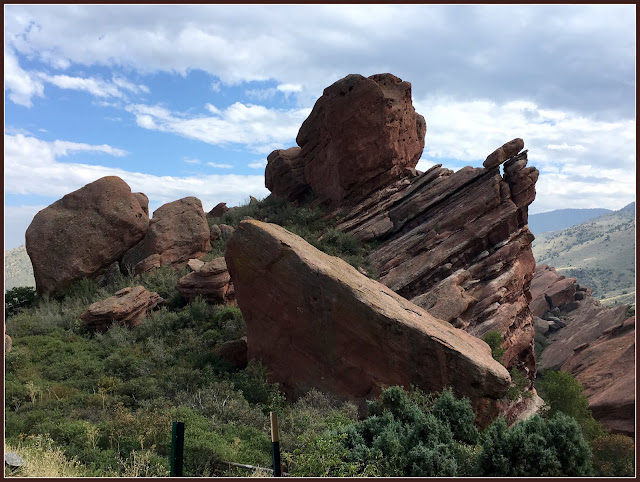 In 1928, the Denver Parks manager convinced the City of Denver to purchase the area from Walker for $54,133. The park long called by its folk name "Red Rocks” officially became known by that name. The city worked to make it a public concert space by enlisting help from the 1933-1942 federally-sponsored Civilian Conservation Corps (CCC), and the Work Projects Administration (WPA), labor and materials were provided. (WPA was the largest American New Deal agency, that employed millions of people to carry out public works projects. Almost every U.S. community had a park, bridge or school built by the WPA.) 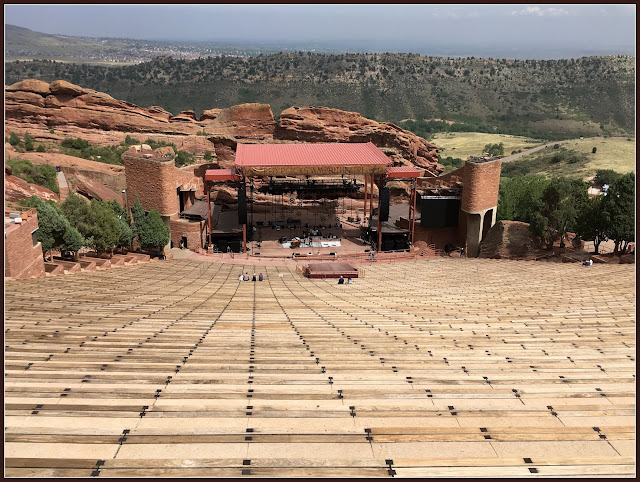 The amphitheatre was designed by Denver architect Burnham Hoyt, who modeled it after the Theatre of Dionysus at the Acropolis in Athens, Greece, with an emphasis on preserving the natural beauty of the area. Plans were completed in 1936 and the amphitheater was dedicated in June 1941; however actual construction spanned 12 years. 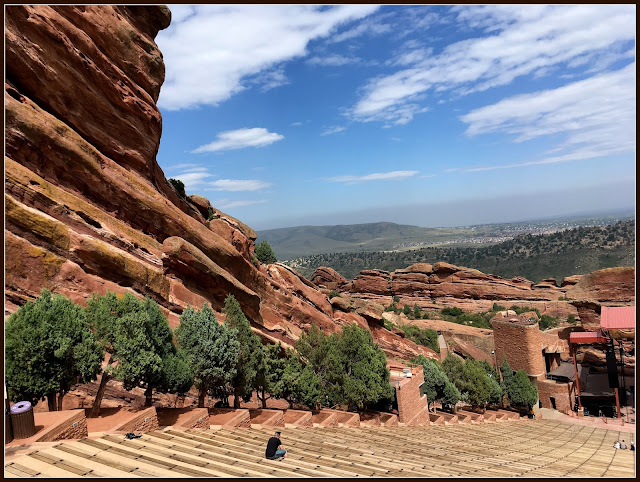 The highest seat at Red Rocks has an elevation of 6,435 feet. The amphitheatre has a total seating capacity of 9,525.  Red Rocks Amphitheatre was once listed as among the Seven Wonders of the World. 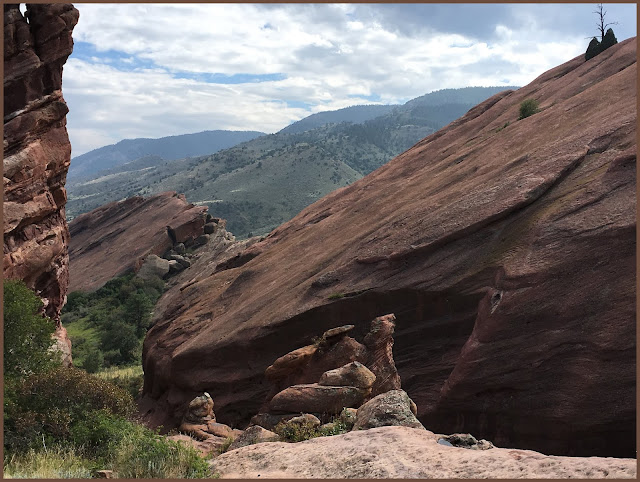 The amphitheater is owned and operated by the City and County of Denver, CO. The first performance each season is a non-denominational Sunrise Service held on Easter Sunday, a tradition that started in 1947. 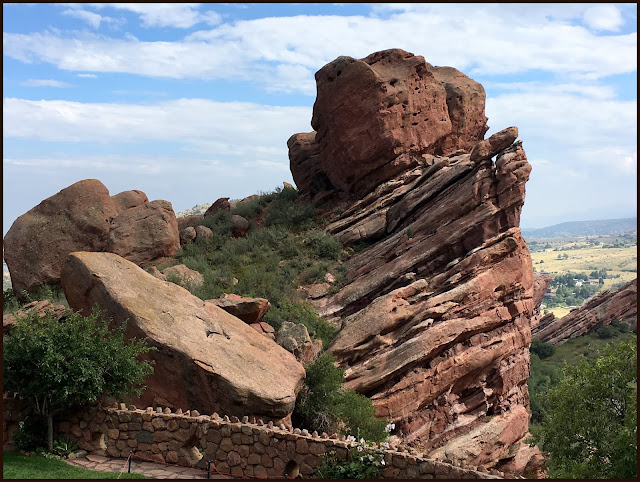 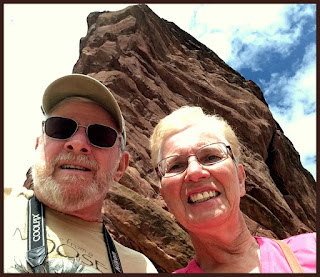 A concert was scheduled for the evening of the day we visited and the area was being  while the band rehearsed in the afternoon. Fortunately. we were able to spend time looking around before it closed. We heard the group to appear that night, Nathanial Ratliff & the Night Sweats, rehearse for awhile. (From what we heard, it's not a concert we would've wanted to attend.) Concert attendance is not inexpensive; general admission tickets start at $50 and upwards depending on the popularity of the performer (remember the seating here is stone, no padded seats or backrests). We were OK with admiring the area's natural beauty, which was completely FREE.
Posted by Beatrice P. Boyd at 7:00 AM

That is incredible and beautiful in its own right. Believe it or not, I have 3 red rocks that I got in Kansas, and they are from basically the same situation....what was left after the waters subsided. There is nothing like that in Colorado however. You have certainly seen some unusual sites.

a big wow for the red rocks, I love them and WOW WOW for that amphitheater.

It would be an especially good for rock concerts, I would think.

The natural rock formations in that area of the country are astounding. Mother Nature has a truly artistic bent.

Such an unusual spot with beautiful rock formations. I would love to go to a concert there if it were a musical group I liked, however, I might have to bring my own chair or at least a cushion. Not sure I could sit through a concert on a rock seat.

U2 did a concert and live album there, back in the days before their Joshua Tree album.

I rather enjoy this trip across the United States, so many interesting places that I'll never be able to visit in person. Thanks for sharing. x

Sounds like a lovely road trip - I plan to go back and read the posts I missed.

Just imagine how soaring classical music would sound around those gorgeous rocks!

It looks cool and like a beautiful place to hear music. I guess part of the ticket cost is you are paying for the view as well as the music. It's great to see this place though. Hugs-Erika