Incorporated in 1791, Bangor is named for an Irish hymn “Bangor.”

The Great Fire of 1911destroyed most of the downtown and changed  the face of the city, but Bangor rebuilt and prospered. Most of the present downtown is listed on the National Register of Historic Places as the “Great Fire Historic District',” while the portion that survived the fire is the 'West Market Square Historic District'. The Unitarian Church shown below was destroyed and later rebuilt on the same site. 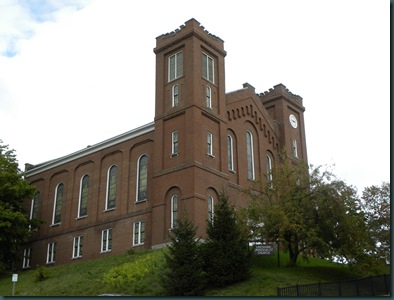 The current library building, designed by the Boston architectural firm of Peabody and Stearns, opened its doors in 1913. The library is listed on the National Register of Historic Places as part of the Great Fire of 1911 Historic District. 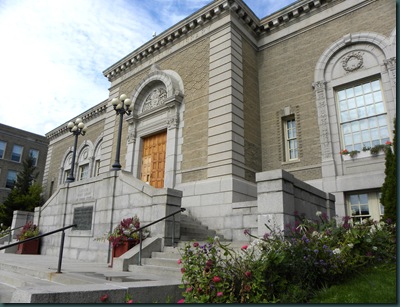 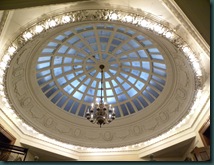 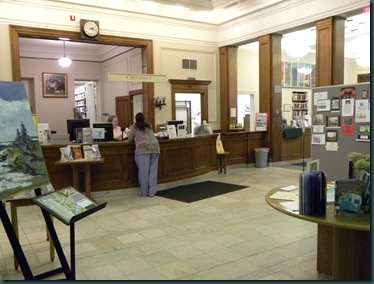 City Hall was the former post office. Walking in the front door you are greeted with a 3-part mural “Autumn Expansion” (1980) by noted artist Yvonne Jacquette known for her depictions of aerial landscapes, especially low-altitude aerial views of cities. 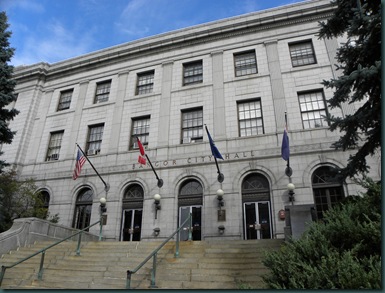 There are three large bronze statues in downtown Bangor by Brewer, Maine sculptor Charles Eugene Tefft, shown below these are the Luther H. Peirce Memorial, commemorating the Penobscot River Log-Drivers, a statue of Hannibal Hamlin (Lincoln’s first vice president and Maine native) and an image of "Lady Victory" at Norumbega Parkway. 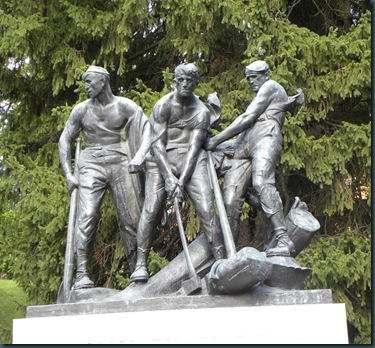 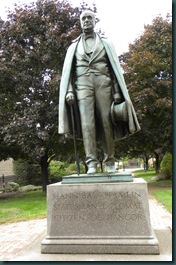 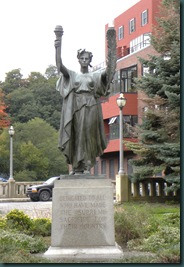 Downtown Bangor began to recover in the 1990s, however, with bookstores, cafe/restaurants, galleries, and museums filling once vacant storefronts. The recent re-development of the city's waterfront has also helped re-focus cultural life in the historic center 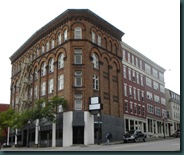 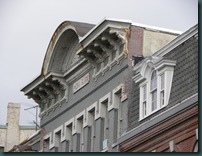 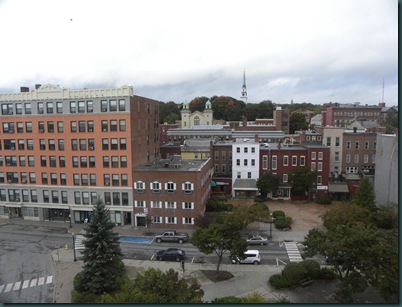 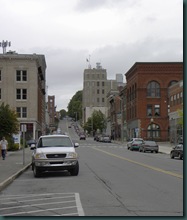 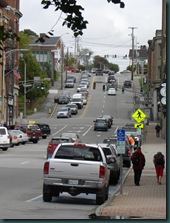 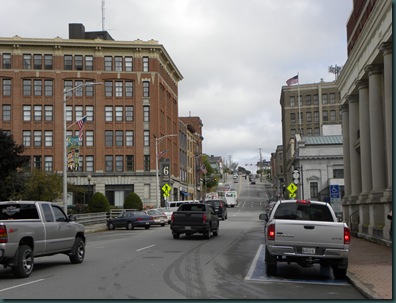 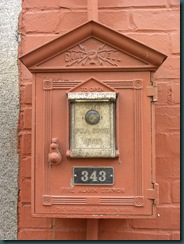 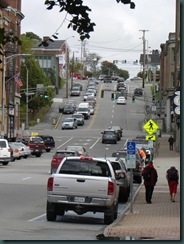 Built in 1873, the Phenix Building was originally a combination of offices and retail space. It’s now the small Charles Hotel. 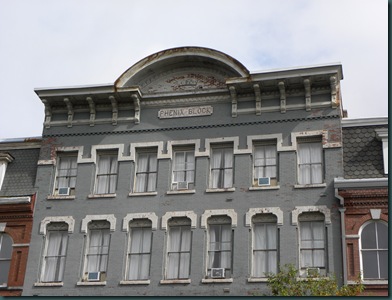 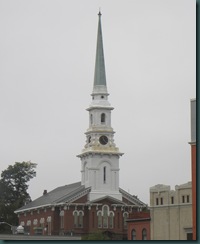 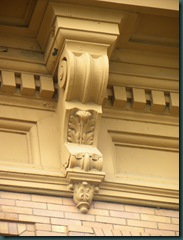 And, there was some (more) rain in Maine. 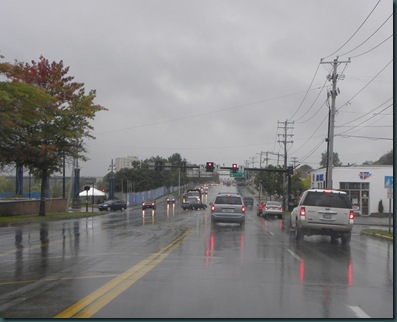 But, luckily the rainstorm hit AFTER we completed our downtown walking tour or Bangor. 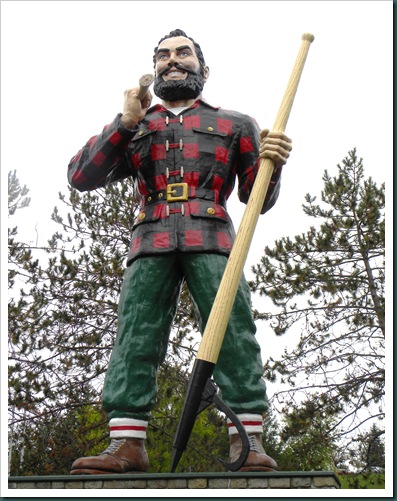 It is reputed to be the largest Bunyan statue in the world. Its steel and fiberglass frame is hurricane-proofed to withstand 110 mph winds.

Legend has it that Bunyan and his giant blue ox, Babe, traveled throughout the U.S. creating the Grand Canyon, Puget Sound and the Black Hills.

The Chamber of Commerce sells cassettes of the official Bunyan song, “The Ballad of Paul Bunyan,” by Joe Pickering. It won the Country Music Association's Comedy Song of the Year award in 1997.

Over the years, Paul has been outfitted with a giant fez (Shriners convention) and a huge bandana (Willie Nelson concert).

The statue was a gift to Bangor in 1959 on its 125th anniversary and cost $20,000 raised by donations. It was built by the Messmore and Damon firm of New York. Local artist J. Norman Martin was reportedly paid $137 to design the statue.

W.B. Laughead, an advertising copywriter, introduced the giant to the public. Laughead used Bunyan in pamphlets from 1914 to 1944 to promote Red River Lumber Co. (Minnesota) products.

Maine native and author Stephen King gave the statue life in his 1986 novel, “IT.”

A time capsule entombed in the pedestal is slated to be opened  on February 12, 2084, the city’s 250th anniversary.

But Where’s Babe? Legend has it that Bunyan and his giant blue ox, Babe, traveled throughout the U.S. creating the Grand Canyon, Puget Sound and the Black Hills. Babe is not with Paul in Bangor.

Exactly what we wondered when we saw this marker while walking in downtown Bangor on Central St . 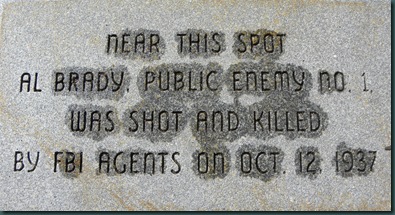 Unlike the fictional Bunyon, Al Brady brought fame of a different type to Bangor. In the fall of 1937, Brady and another man were killed on Central St. in the bloodiest shootout in Maine's history.

Brady became the FBI's most wanted man, after federal agents killed the previous PE #1, John Dillinger, in Chicago in 1934.  Indiana-born Brady and his accomplices, the Brady Gang (not the Brady Bunch) were wanted for over 200 robberies, assaults, and murder, including a police officer and state trooper.

The term Public enemy was used in the 1930s to describe those whose activities were seen as criminal and damaging to society. FBI head, J. Edgar Hoover used it to describe fugitives  including Dillinger, Baby Face Nelson, Bonnie and Clyde, Ma Barker, and Brady.

In late Sept 1937, two of Brady's gang went to Dakin's Sporting Goods, bought several automatic weapons and a rifle and ordered a third gun. They claimed to be hunters, but  the owner suspicious since hunters don't use pistols (especially semi-automatic ones) contacted police after taking their order and telling them to return in a few weeks. When they returned, FBI agents were waiting. Brady and another man drew their weapons and were shot down in a furious exchange. Photographs of their bodies lying dead in the middle of Central St. and hung in Dakin's store for years afterwards. 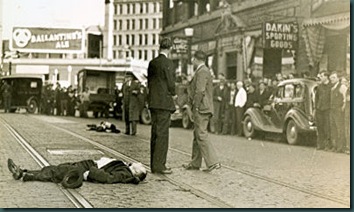 Brady's body went unclaimed and he was buried in the public section of Bangor’s Mount Hope Cemetery. He was 26 years old. 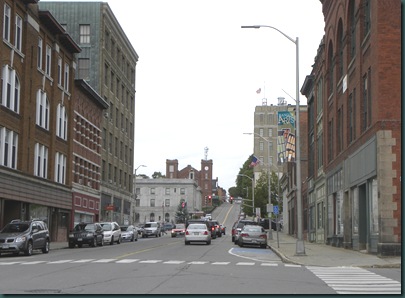 Here’s a current view of downtown Central Street in Bangor.

This morning after reserving a room at Ramada we headed ‘down east’ towards Bah Harba, as the locals pronounce it. The first stop was Ellsworth which claims itself to be the Gateway to Down East.

This is where US Rt. 1 meets Maine Rt. 3. We opted to head into downtown and roam around. We found eclectic shops, a farmers market, an organic market, antiques, coffee shops and cafes, and a gourmet kitchen store. What more can one ask for.

And what is Maine without Maple Syrup (and you thought it was just in Vermont).

Very unique town logo on City Hall. We found that there was quite a bit more of Ellsworth back on Rt. 1 with some big box stores and an LL Bean Outlet, but the original downtown was much more interesting.

The Grand Theatre is under renovation and we couldn’t get too close. The county courthouse quite massive. The Union River runs through town. This is a tidal river and we caught it on an outgoing tide.

We also found an interesting friend just spinning away.

She is almost like our Charlotte in size and being an orb weaver, BUT she is not the same species. In fact i am not sure what species this little lady is.
Off towards Bah Harba the sea fog was still rolling in at noon.

After some coffee and jelly crullers we headed on ‘down east’. Since i was driving Beatrice has all the great pics. We finally came to the Town of Winter Harbor which was beginning to get re-fogged in. Look hard and you can see the lobster boats in the harbor.

As we continued getting lost we discovered the Winter Harbor Library. A unique building that had once been a chapel.

Beatrice will be telling you a lot about Bangor so i will just say that Bangor is like many small cities that were by-passed by an interstate and then endured the development of a mall. Most of these cities have reinvented themselves, sometimes more than once. Bangor downtown has a Discovery Museum, a branch of the University of Maine, Coffee shops, antique malls, a wonderful library (which i go lost in), and it is walkable.

And then there is Bangor’s patron saint…. NO NOT Steven King… Paul Bunyan of course. More on that from Beatrice.
Posted by Anonymous at 10:16 PM No comments: