We're currently on a cross country road trip from New Hampshire to Oregon and posting about sites along the way. This post is about a stop in La Crosse, WI.

Towering 25 feet high and weighing 20 tons, Hiawatha serves as guardian of the sacred place where three rivers meet — the Mississippi, Black and La Crosse Rivers and is quite an imposing figure. 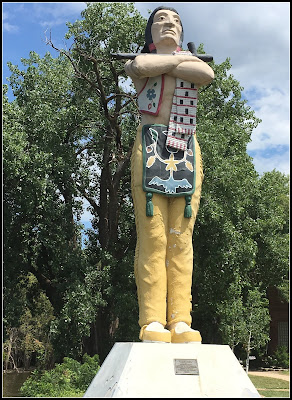 Hiawatha, which became known as the "Big Indian," was created by Anthony Zimmerhakl, an art teacher in the La Crosse schools, who with the help of his sons, worked on it for four years, layering cement on wire mesh in the back yard of his home. The statue made its debut in October 1961 as part of the first La Crosse, WI Oktoberfest.

When it was unveiled, local Native Americans, Winnebagoes (now Ho-Chunk Nation), wanted it renamed Decorah after one of their great chiefs. Zimmerhakl objected and said he based the sculpture on Hiawatha, the 16th century chief credited with bringing together the Iroquois Nation. (You can figure out who won that argument.)

The statue cuts an imposing figure as its stands near the entry point where the La Crosse Queen paddleboat docks and near the Convention and Visitor’s Bureau.

Aside from the naming issue, Hiawatha has raised quite a bit of controversy over the years. In 2000, when the city council debated if it should restore Hiawatha, protectors said the statute perpetuated Native American stereotypes. The statue was showing signs of age. Who wouldn’t after 39 years of being outdoors, especially in Wisconsin? In the end, $35,000 was spent to refurbish and repaint the statue. Of that amount, $16,935 was raised from private funding and $18,605 was allocated from the city's budget. To ensure authenticity, representatives of the Ho-Chunk Nation were consulted about the colors used to repaint the statue.

The 20-ton statue is not the biggest Hiawatha statue, only the largest one in WI. The largest statue honor belongs to a 1964, 52-foot high Hiawatha that stands in Ironwood, MI. 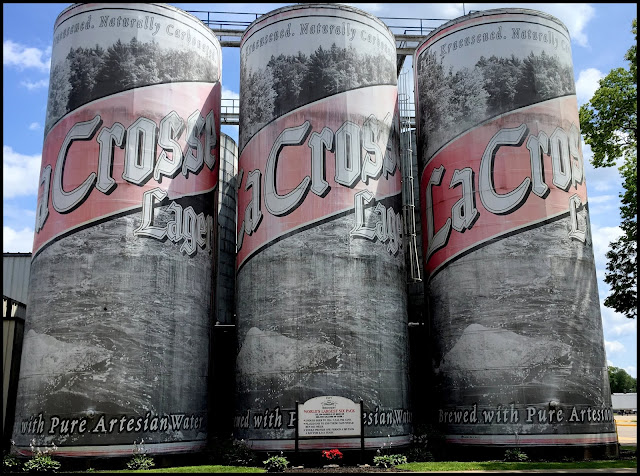 In the late 1960s, the G. Heileman Brewing Company built six large storage tanks at its La Crosse, WI plant. These tanks were painted to resemble cans of Heileman's Old Style Lager beer, and the sextet was quickly dubbed as the World's Largest Six Pack. Images of the six-pack where seen worldwide courtesy of postcards sold in the Heileman gift shop, which quite naturally was included in a brewery tour. 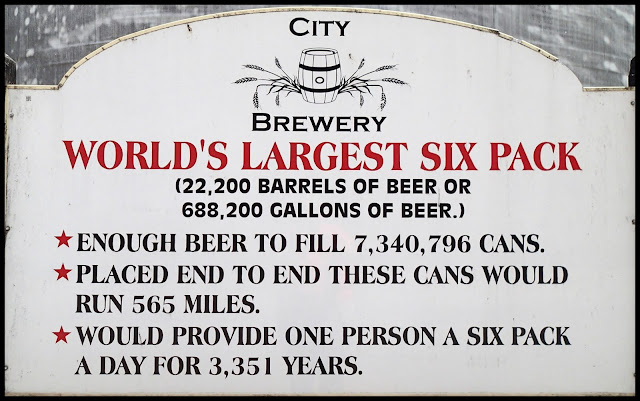 After 30 years, the brewery was sold and shut down operation but the tanks remained in place. In 2000, the empty tanks were painted white, but the Old Style Lager labels were still visible. In 2003, new brewery owners brought back the World's Largest Six Pack, to advertise a new brand of beer, La Crosse Lager. Today, the 6-pack is aging badly as the new labels were wallpapered onto the existing tanks and not painted on them. Unlike its brewery predecessor, the current plant produces not only beer, but tea, soda, and energy drinks. 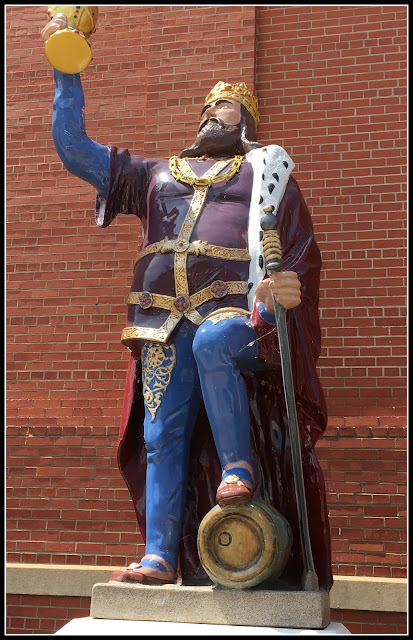 Standing directly across the street and, perhaps watching over the World’s Largest Six Pack, is quite appropriately another statue which is named Gambrinus, “King of Beer.” This 15-foot, 1-ton painted sculpture has one foot propped up on a keg and one hand is hoisting a goblet of presumably of beer. An accompanying plaque (bearing the logo of Heileman's Old Style Lager), labels Gambrinus, "a valiant soldier of the 15th century" and credits him with the invention of beer. 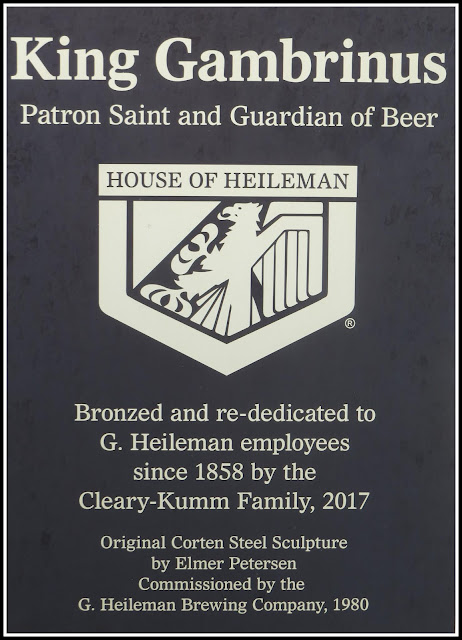 The Gambrinus legend originated in Holland and Belgium, where Gambrinus (whose real name was Jan Primus) was a 13th century soldier, duke. He was also an honorary member of the Brussels Brewers Guild.

In 1939, the Heileman Company purchased the sculpture for $100 from a New Orleans brewery that went out of business during Prohibition. The status stood on a pedestal in front of City Brewery until March 2015, when its sword arm was torn off by three late night photo-seeking drunks. The statue was removed in April 2015, and parts used to create an exact fiberglass replica. The new Gambrinus was returned to its original spot in July 2017.

Another much less colorful statue of King Gambrinus stands at the corner of State and Harborview Plaza, across from Riverside Park. It's within view of the Hiawatha statue described earlier. 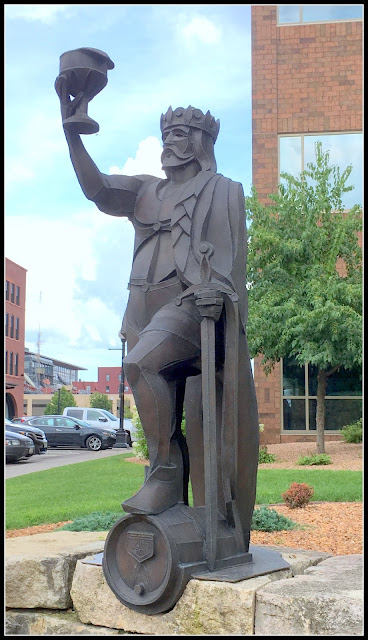 This bronze statue is an exact replica of one that stood nearby and outside the former Heileman Brewing Company offices. A local sculptor, who built the first statue in 1980, also created this new one.
Posted by Beatrice P. Boyd at 7:00 AM

They do believe in big statues there dont they? LOL Interesting area.

Fascinating info to go along with your photos. Thanks Dorothy.

What an interesting and rich history the town has. Love those tall sculptures.

you have certainly found MOST interesting places and things in your trek across the USA.. a king and a chief, what is next

Now you've done it! I am sitting here reciting 'The Song of Hiawatha' in my head. I'll never get it out.

I think I might have seen the Hiawatha when I was a child.

All these legends found in one little town. Now that's what i call part of a good trip.

That certainly is a place of oversized statues, fascinating.

The huge statues are impressive... and the history makes for a good read. Thank you.

They sure like big statues, don’t they? But what fun to see and what good stories they give you to write about.

Interesting history of the statues and the area there.

One minor correction, La Crosse is in Wisconsin

Thanks, Unknown, for alerting me to this mistake. Friends in La Crescent, MN, were giving us a tour of highlights in both states and I inadvertently inserted the wrong state. A correction has been made thanks to your comment.