We're currently on a cross country road trip from New Hampshire to Oregon and posting about sites along the way. This post is about a stop in Denver, CO.

As noted in previous posts about our visit to the Wisconsin capitol in Madison, the Idaho capitol in Boise, and the Utah capitol in Salt Lake City these buildings are among the best places to visit if you're in a state's capital city and they're FREE to tour. 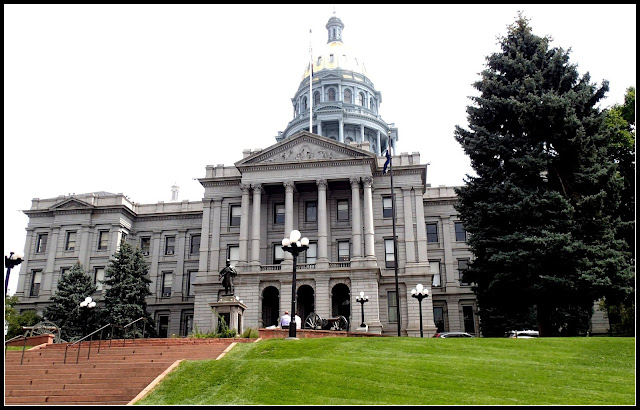 Colorado was admitted to the Union as a state in August 1876. Its state capitol was built in the 1890s and opened in November 1894 and is home to the Colorado General Assembly, and the offices of the Governor, Lieutenant Governor and Treasurer. (The Colorado Supreme Court was formerly here, but is now in a separate facility in Denver.) 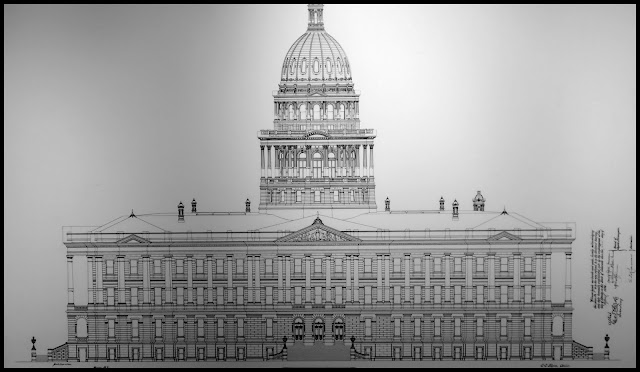 The building is intentionally reminiscent of the U.S. Capitol. It was designed by Elijah E. Myers, a leading architect of government buildings and the only architect to design the capitol buildings of three U.S. states:  Michigan, Texas, and Colorado. He believed that architecture should reflect its intended use. His Corinthian design for the capitol was meant to be dignified yet functional. 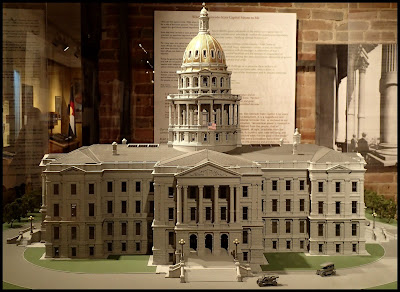 The building is immense with 647,000 square feet of space and less than 50 percent dedicated to actual work space. This scale model shows the entire building and is on display in a "memorabilia" room in the capitol.

The offices of the governor, secretary of state, auditor and treasurer are on the first floor, accessible to each other and the public. On the second floor (symbolically elevated above the executive branch) are the Senate and House chambers and the original Supreme Court; the third floor has observation galleries for the legislature.

The capitol's exterior was originally to be white sandstone, most likely for its lower costs. Ironically, people objected and wanted granite, but difficulties in quarrying, shipping, and trimming the stone would add $500,000 to the cost. Public opinion won out and the expense was justified with the explanation that for Colorado’s finest building, the best stone should be used, and that was granite. 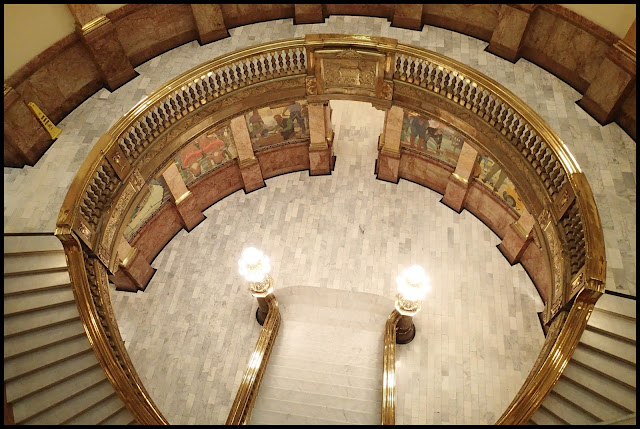 In another change, plans called for wood to be used for the flooring  stairways and walls, but concerns about fire, led to an alternative  and the selection of Colorado marble. The Yule Creek Quarry in Marble, CO supplied most of the white marble for the floors in the building. It took 6 years to cut, polish and install all the marble. (Fifty years later the same marble was used for the Lincoln Memorial and Tomb of the Unknown Soldier.) 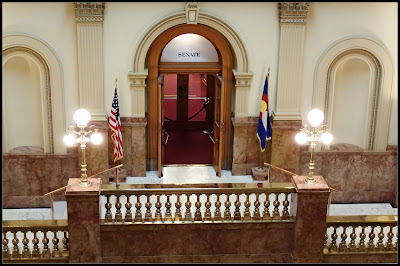 The interior of the capitol is adorned with what is believed to be the entire known supply of Colorado Rose Onyx. This rare rose marble was mined from a quarry near Beulah, CO, southwest of Pueblo.

It's found throughout the capitol and is the only one of its kind in the world. 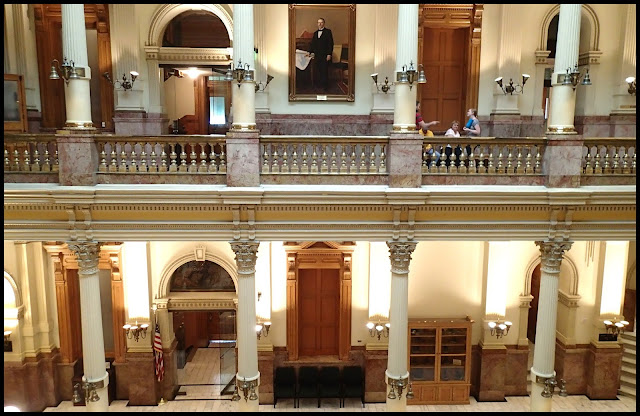 Upon entering the capitol, the first sight is this very elegant stairway. The main entrance hall is open 180 feet to the top of the dome, about the height of an 18-story building. 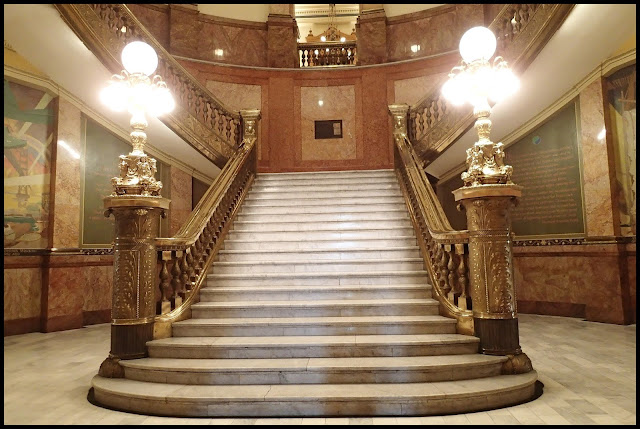 We wanted to stand exactly where the official elevation of Denver is measured and the 15th step has this inscription. Alas it's now somewhere between the 13th and 18th step. 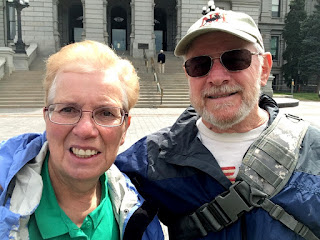 That’s because, since 1909 the 15th step has been engraved ""One Mile Above Sea Level" (5,280 feet). But in 1969, Colorado State University students remeasured and calculations put a mile high on the 18th step.

In 2003, the elevation was re-measured and researchers identified the 13th step as the correct benchmark. (The difference between the 15th and 18th step is 3.03 feet, since we walked all the steps, figure we reached a mile high.) 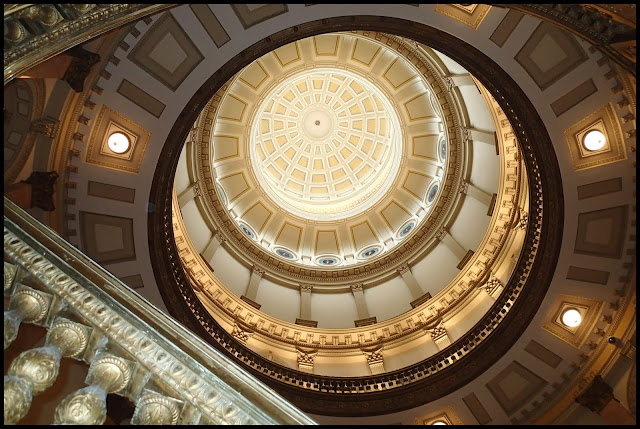 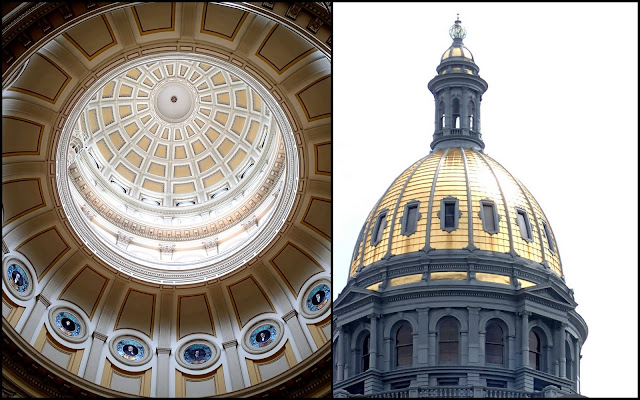 The dome is copper covered in gold leaf. The copper dome was installed in 1894 and by 1908 it had turned black from the elements. Copper plates were replaced and then gilded in gold to commemorate the Colorado Gold Rush. The gilding has been replaced over the years. In 2013 the copper was replaced for the first time since 1908 and re-gilded. It's estimated that the dome has 200 ounces of gold leaf from a Colorado mine. 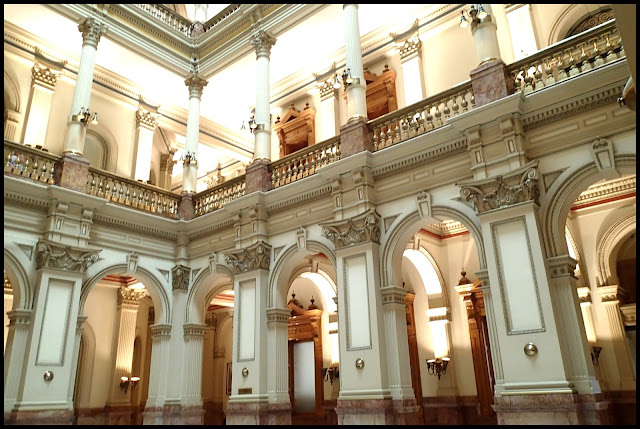 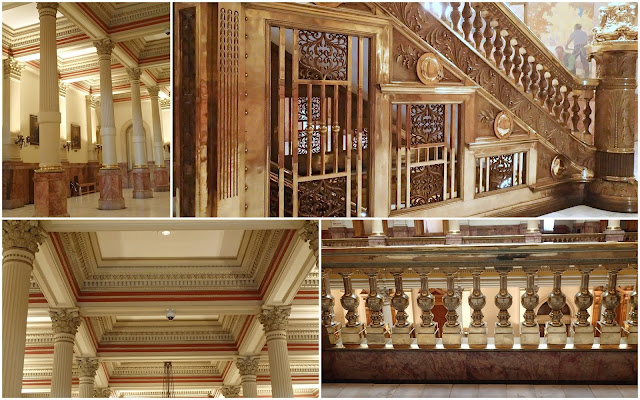 In our opinion, the Colorado state capitol was quite a change to the previous ones we'd seen. It looked much more opulent and bright, even if the furnishings weren't "real" gold. 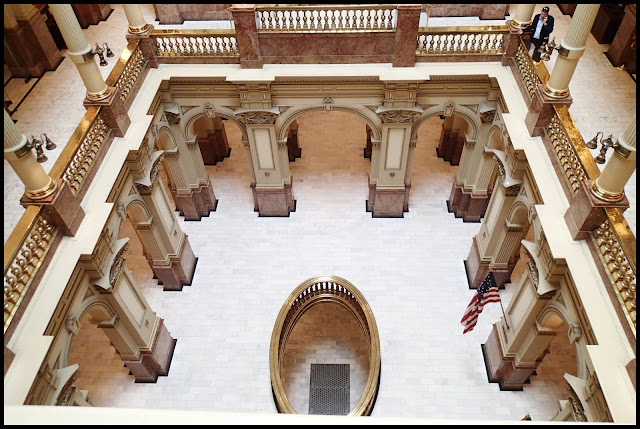 I like the inside better than the outside. it really is beautiful inside. I just realized I have never seen or been inside any state capital other than DC.. and that was when I was 8 years old... now I am going to have to search for KY, GA and FL state captiol buildings to see what they look like

What an elegant building; what fun to be 1 mile above sea level and on which step, no matter, it is still high! Have a nice Saturday on your next adventure.

Wow, yet another sight that I will never see so I have really enjoyed coming along with you.

It is a marvelous building. I like the classical style of the past making the government building a real special place Great shots to help us see how great this place is. It is so large.

Someone once told me that there is beauty in buildings - this one proves his point.