Don't Pass (Up) the Salt

We're currently on a cross country road trip from New Hampshire to Oregon and posting about sites along the way. This post is about a stop in Utah.

Amazing, Unbelievable and WOW are how we would describe the Bonneville Salt Flats and we're fairly sure others have as well. This area is one of the most unique natural features in Utah and covers more than 30,000 acres. (It's also a FREE attraction.) 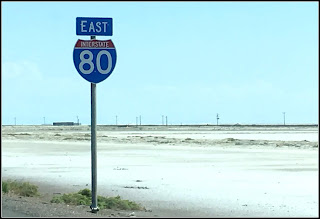 Seeing the salt flats is an amazing sight as we found out when we were driving on I-80 between Salt Lake City, UT and Wendover, NV, near the Utah-Nevada border.

There's a rest stop and observation tower so that visitors can get a better view. The flats are on both sides of the highway. You can also walk on the salty soil (we did) where Grenville did a taste sample. The salt surface contains potassium, magnesium lithium and sodium chloride — the same ingredients in common table salt.

The salt flats are just that — (very) flat with a thick crust of salty soil that looks like a snow-covered frozen lake bed. In fact, that's how the salt flats got their start.

The Salt Flats were formed when ancient Lake Bonneville dried up during the last Ice Age. In case you're counting back that was some 15,000 years ago.

The lake was huge (estimated the size of Lake Michigan) and it filled up much of the Great Basin covering a third of what’s now Utah and parts of several neighboring states. When it shrank below its outlet, the water became salty and as the water evaporated, salt deposits were left. (The Great Basin is the largest area of contiguous watersheds in North America spanning nearly all of Nevada, much of Oregon and Utah, and parts of California, Idaho, and Wyoming.) 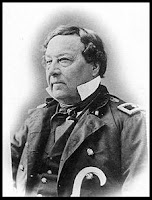 American Geologist Grove Karl Gilbert named the area in honor of Captain Benjamin Bonneville, a U.S. army officer, whose expeditions in the 1830's proved that the area was part of an ancient basin. Bonneville is also noted for blazing parts of the Oregon Trail.

Several roads extend into the Salt Flats from many directions and these often extend into remote locations where conditions are harsh. In spots the soil is so salty it prevents vegetation growth.

In winter, a shallow layer of standing water floods the surface of the salt flats. During spring and summer, the water evaporates and winds smooth the surface into a large flat plain. On hot days, heat waves rise from the salty soil creating mirages that make the dry desert looks as if its covered by water. (As we were driving towards th flats, it actually looked like we were seeing water.) Temperatures can exceed 100°F in summer months and drop below 0 in winter. 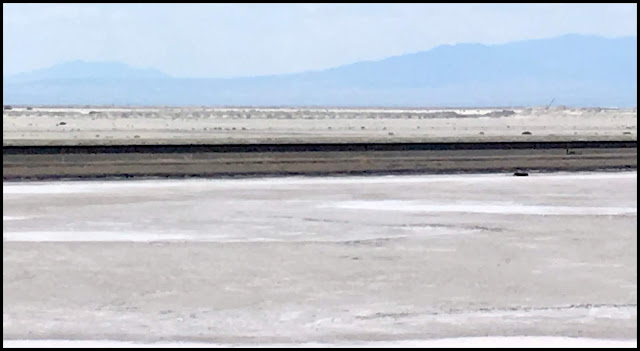 The Bonneville Salt Flats is administered by the Bureau of Land Management and was designated an Area of Critical Environmental Concern in 1985. The U.S. federal government owns most of the land; large portions are used by the military for storage depots, test areas and bombing ranges. These areas are fenced and marked and public access is strictly prohibited.

Motorcar racing has taken place in the western portion of the Salt Flats since 1914 in an area famously known as the Bonneville Speedway. Five major land speed events take place at the Bonneville Salt Flats annually depending on the condition of the salt (Speed Week in August, World of Speed in September, and the World Finals in October). Speed Week was cancelled in 2014 and 2015 due to deteriorating track conditions. Heavy rains caused a layer of mud from surrounding mountains to flow onto the flats, covering approximately 6 miles of track. 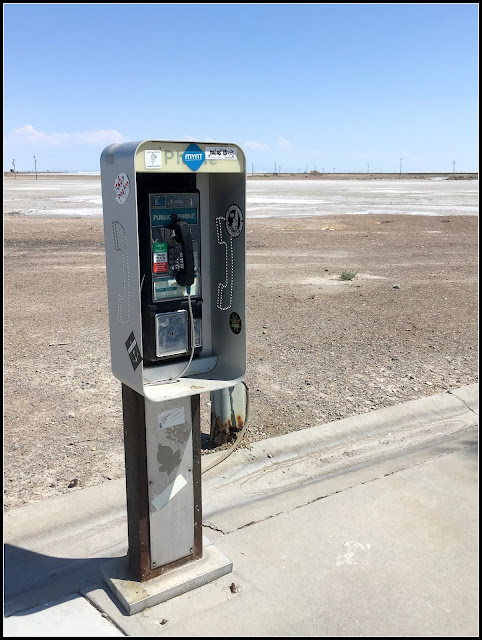 Here something that seemed a bit out of place. This pay telephone was on the salt flats near the visitor's center.

And, here's the explanation of WHY it was there. 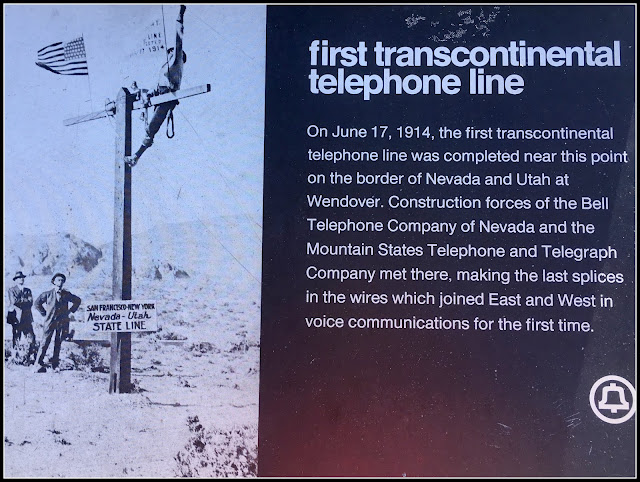 We're not sure if the phone was operational or not as we didn't try to call anyone.
Posted by Beatrice P. Boyd at 7:00 AM

WOW, that is all I can say, WOW. I have always heard about the salt flats, but had never seen pictures before.

What a truly amazing sight! Thanks for sharing the views and also the history of the flats. x

I've been to Salt Lake City but I don't remember the salt flats.....it was many years ago but I think I would remember if we did indeed see them. Certainly an amazing thing to see!

Wow, this is amazing. Thanks for sharing these photos.

I saw these flats in 1984 and they are amazing.. I love the photo of the phone and that is new info to me...

Salt flats are an interesting area. The history explains why they're there.

I can't recall the first time I heard of the flats, but they fascinate me. I'd love to see them someday. Assuming I'm not blacklisted in Utah- I once annoyed a Mormon elder.

Wow, somewhere I am never likely to see so it was such a joy to come along with you.

Lots of salt to see. Phone looked like it was from an old movie.