We're currently on a cross country road trip from New Hampshire to Oregon and posting about sites along the way. This post is about a stop in Utah.

Located in the heart of downtown Salt Lake City, Utah is historic Temple Square, world headquarters of The Church of Jesus Christ of Latter-day Saints. This 35-acre popular tourist destination attracts an estimated 3 to 5 million worldwide visitors a year.  Free tours are available in 30 languages by native-speaking guides. Temple Square was designated a National Historic Landmark District in 1964. 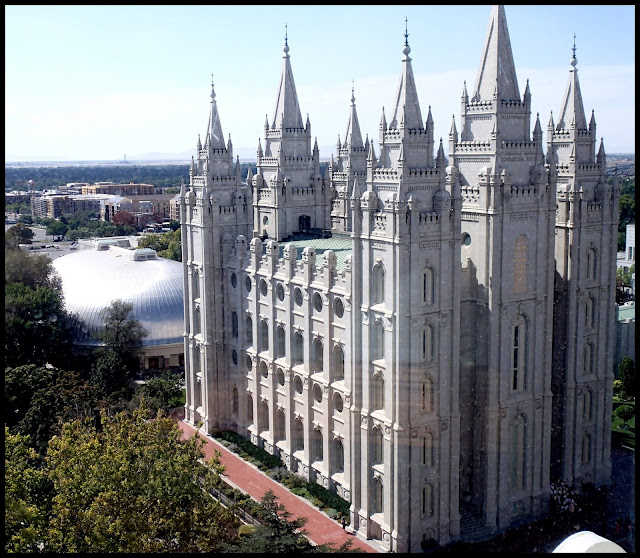 In 1847, after Mormon pioneers arrived in the Salt Lake Valley, accounts are that Church president Brigham Young designated where they would build their temple. When the city was surveyed, the block enclosing the location was  selected for the temple and the surrounding area became the center of the city. Temple Square serves as the delineation point for all street addresses in Salt Lake City; each address is an indication of how many blocks north, south, east or west that address lies from Temple Square. 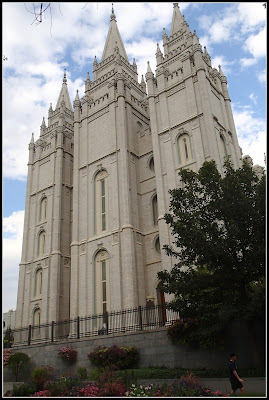 The centerpiece of the square is the majestic Salt Lake Temple. This massive granite edifice was constructed in a neo-gothic style over a 40-year period between 1853 and 1893. Only members of The Church of Jesus Christ of Latter-day Saints are permitted to enter the temple. Visitors can walk the grounds and admire the workmanship. The South Visitors’ Center includes a scale model of the Temple as well as detailed information on each room, its contents and purpose. 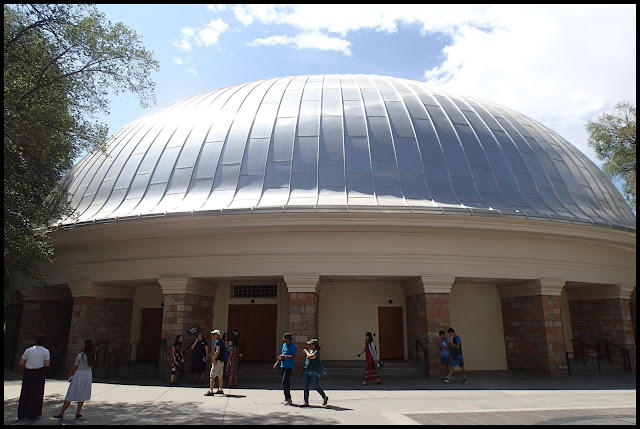 The Salt Lake Tabernacle, built between 1864 and 1867, across from the Temple is open to visitors. The roof was constructed in a lattice-truss arch system that's held together by dowels and wedges. The building has a sandstone foundation, and the dome is supported by 44 sandstone piers. Overall seating capacity is around 7,000, which includes the choir area and balcony. Formerly used for church meetings, its home to the world renowned renowned Mormon Tabernacle Choir. Visitors are allowed to listen to practices. 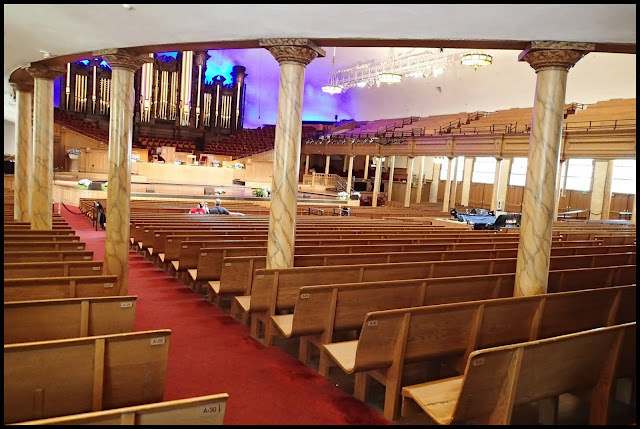 The Tabernacle organ, which has been rebuilt several times, contains 11,623 pipes, and is one of the largest pipe organs in the world. The largest 32-foot display pipes in the facade are made of wood and were constructed in the same manner as the balcony columns. The Tabernacle is an architectural and acoustic wonder. It was constructed so that the drop of a pin at the front of the building can be heard at the back of the church. (This fact was demonstrated during our visit.) 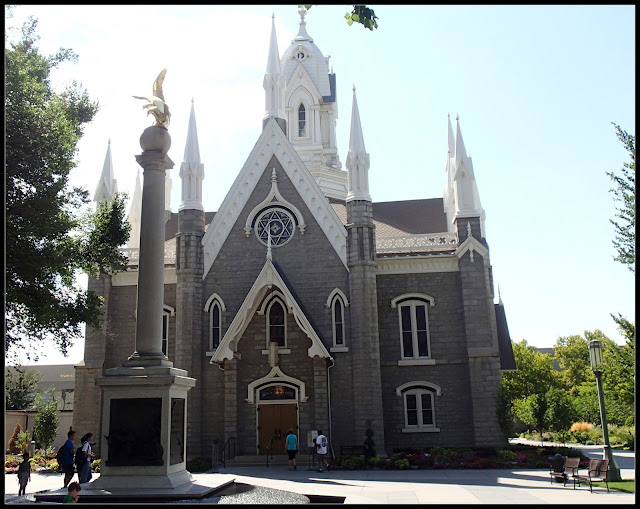 The Assembly House is a Victorian Gothic-style congregation hall with stained glass windows was constructed the Church between 1877 and 1882. The hall's exterior resembles a small gothic cathedral. Twenty-four spires mark the perimeter of the building's footprint. It’s built of quartz monzonite rock from the same quarry as the Salt Lake City Temple. The exterior looks different as the stones were not cut as precisely as those for the Temple. 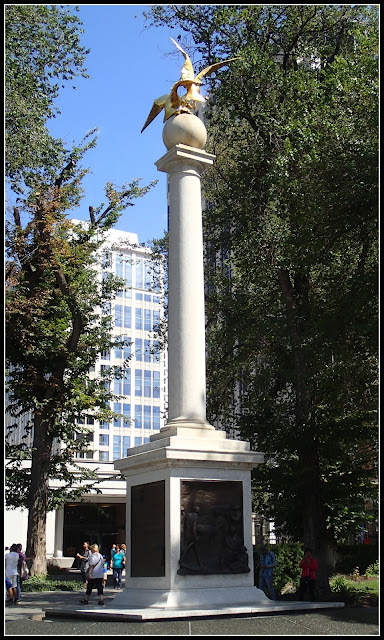 The Seagull Monument sits directly in front of the Assembly House building to the east. Here the reason why — In 1848, swarms of crickets attacked and devoured the newly ripened crops of Mormon pioneers. The insects, now called "Mormon crickets" because of this incident, actually belong to the katydid family. These flightless insects travel in huge swarms and eat all plant material in their path. 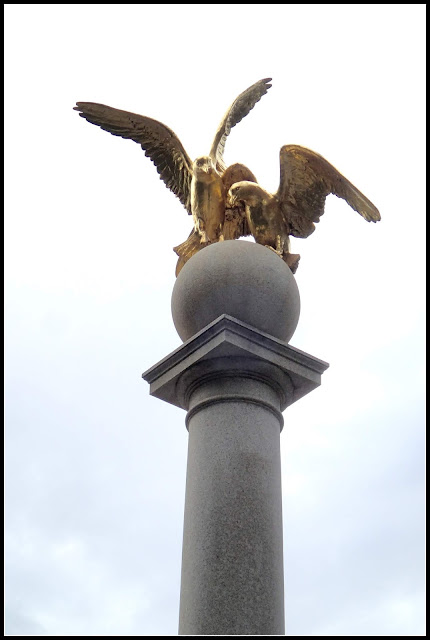 According to the legend, flocks of seagulls native to the Great Salt Lake came in and devoured the insects and thus ensured the survival of over 4,000 Mormon pioneers. The story is recounted in church history as “The Miracle of the Gulls.” (The incident is somewhat controversial and some historians have doubted its credibility.)  Whether the account is true or not, the California gull is the Utah State bird. 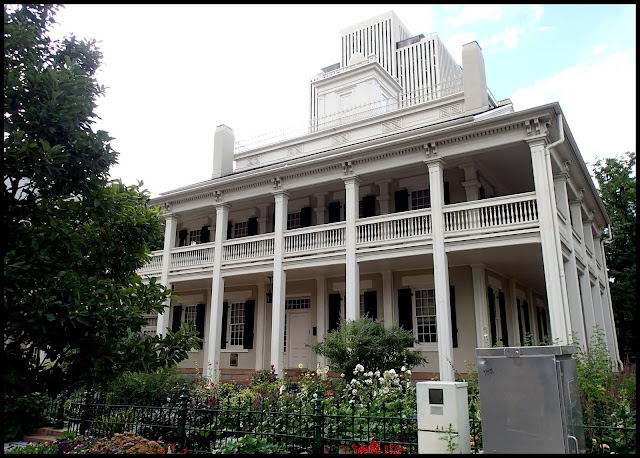 The Beehive House was built between 1853 and 1855 and served as the home of Brigham Young when he was Church president and governor of the Utah Territory. The beehive symbol on top of the building is the state’s symbol to industry and pioneer virtues of thrift and perseverance. It was maintained on the seal of the State of Utah when Utah became a state in 1896. 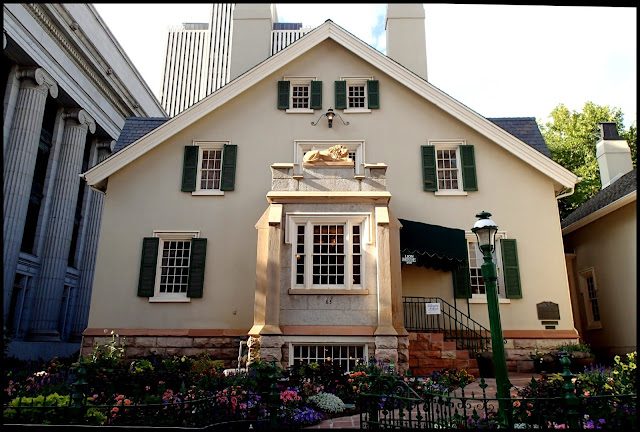 The Lion House was built in 1856 by Brigham Young and it derives its name from the stone lion statue resting over the front entrance. "Lion of the Lord" was a nickname of Young, who served as Church president from 1847 until his death in 1877. 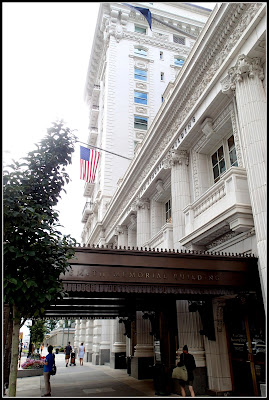 The Joseph Smith Memorial Building was formerly the Hotel Utah, which opened in 1911 and operated for 76 years was Salt Lake City's first world-class hotel. The Church, then led by founder and president Joseph Smith was one of the hotel's shareholders. Ironically, the hotel did serve alcohol, until Prohibition banned it nationwide.

In later years, the Church bought up most of the hotel stock. After it closed, it was completely renovated and reopened in 1993 and renamed for Smith. It’s a social center with three restaurant (no alcohol is served) and church offices.

One of the most popular activities available at Temple Square is family history research.
The Family History Library contains the world's largest genealogical library with guides and genealogists to help visitors research their ancestry and create and explore their family tree. 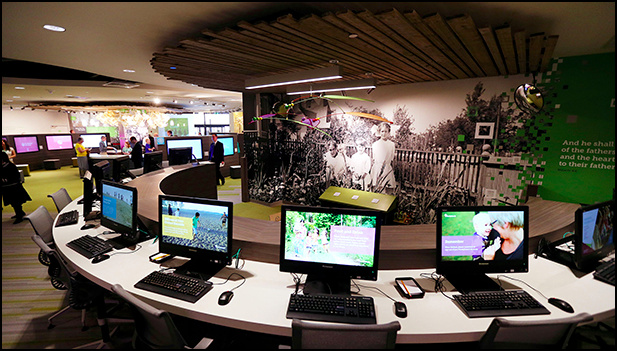 The collection includes 1.4 million rolls of microfilm on-site, along with over 600,000 books, serials, and maps. There are internet-enabled guest computers, microfilm and microfiche readers and access to film, book, and photo scanning equipment to help visitors digitally preserve and share family records. All of these services are available Free. (I started my own family tree and ancestry search during our visit and will continue when we return home.)

If you're also interested in researching your ancestry, you can create an account (free) on Familysearch.org. This (did I mention) free on-line genealogy site which is operated by The Church of Jesus Christ of Latter-day Saints is one of the most popular and heavily-used genealogy sites on the Internet.
Posted by Beatrice P. Boyd at 7:00 AM

I would like to see the temple and all the bldgs. around the area. I would also like to hear the tabernacle choir. Interesting to me about the ancestry that you can research there. Thanks for sharing that.

I did visit the tabernacle and watched the choir practice many years ago. It doesn't look as grand without the lights and I thought the choir didn't sound as spectacular as on TV ;-) I was just out of high school and maybe hard to impress, haha! We also went to the museum and had dinner at a church official's home.
I'm enjoying your posts!

WOW! I tried to count all the spires in the first photo and could not.. lots and lots of them on that beautiful building...

We were there years ago but the Temple was closed at the time. I enjoyed seeing it through your post. Great photos, great post!

I visitied the square but didn't have much time. I went through the tabernacle.

Great photos of Salt Lake's temple, buildings, seagull monument, family library!
Very impressive sites, but not unique. One sees similar architecture in many parts of the world, especially in Europe.

I visited the area 60 years ago as a kid. The new things that you can see are wonderful. We saw the outside of the temple and the round domed building was not allowing the public inside either.

I can see why it is such a popular spot--the temple is beautiful!