We're currently on a cross country road trip from New Hampshire to Oregon and posting about sites along the way. Last week, we finally arrived in Oregon and spent time visiting with friends (as noted before, the blog is not keeping up with our travels in "real time"). 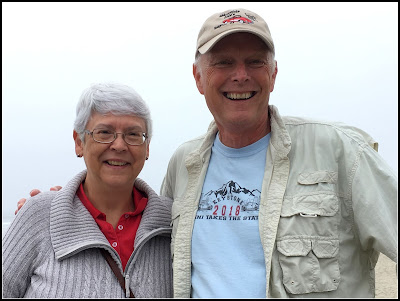 Tom and Nancy, were great hosts. In the few days we spent in their home state of Oregon, we visited a state park with a carnivorous plant, a lighthouse, coastal areas, and a couple of wineries.

We also took time to socialize, catch-up, and wine and dine as we were in wine "country" here. It was great being able to talk in the same time-zone. (Our calls have a 3-hour difference between Eastern standard time in NH and Pacific time in OR.)

Here's some places and things, they shared with us. 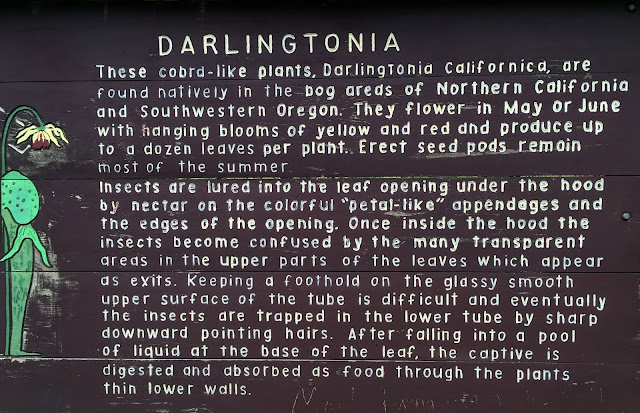 Heard of a carnivorous plant like "Audrey" in the The Little Shop of Horrors? We were introduced to this one that grows in California and Oregon at the Darlingtonia State Natural Site, a state park and botanical preserve located on the coast highway near Florence and the only Oregon state park dedicated to the protection of a single rare plant species. The park has a short loop trail through a peat bog area overlooking patches of Darlingtonia. 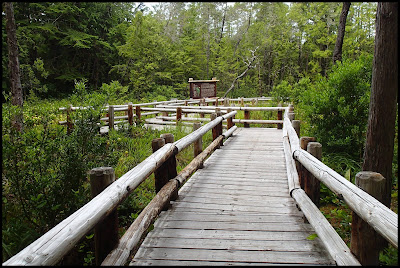 Darlingtonia californica (also called California pitcher plant, cobra lily, or cobra plant) is a species of carnivorous plant that’s native to Northern California and Oregon and grows along stream sides and in bogs. It prefers sunshine and doesn’t grow well in shade.

It’s named "cobra lily" because its tubular leaves look like a rearing cobra, complete with a forked leaf. It’s just as deadly as the snake, but to insects. The leaf of Darlingtonia is tubular, and contains a fluid that digests trapped insects. The upper part of the leaf is modified for the trapping function; the end of is hooded. There’s a circular opening that lets insects can fly into the hood. 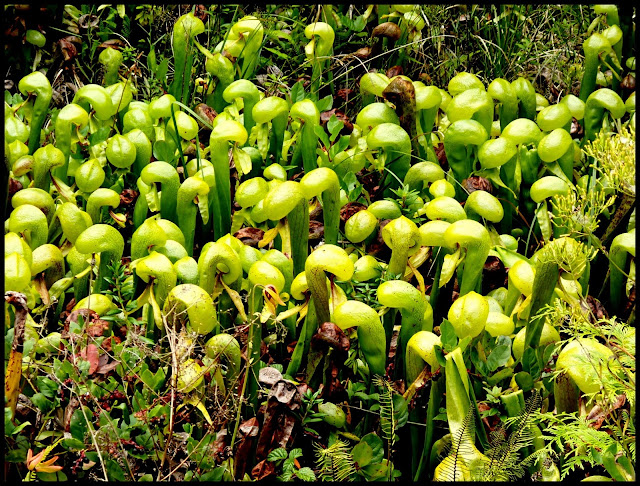 Like humans, insects like sweets.The plant secretes sugary nectar, which flies and insects really like. There are more nectar glands inside the hood, and the unsuspecting insect(s) progresses into the hood and to its doom. The leaf of Darlingtonia is tubular, and contains a fluid that digests trapped insects. The upper leaf part is modified for the trapping function; the end of is hooded. (Maybe more information than you needed or wanted.) 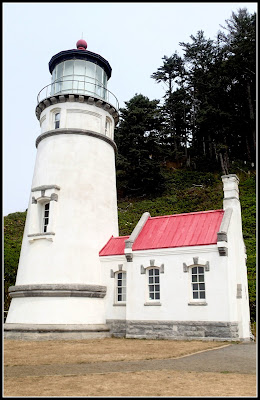 Heceta Head Light is a lighthouse on the Oregon Coast 13 miles north of Florence, and 13 miles south of Yachats. It’s located on the west side of 1,000-foot high Heceta Head at Lighthouse State Scenic Viewpoint, a state park, midway up a 205-foot-tall headland. (It's named after the Spanish explorer Bruno de Heceta, who explored the Pacific Northwest during the late 18th century.)

Built in 1894, the 56-foot tall lighthouse is the strongest light on the Oregon Coast and shines a beam visible for 21 nautical miles. At 205 feet above the Pacific ocean, the lighthouse is one of the most photographed on the OR coast.

In 1892, a crew of 56 began building the light. Because of the site's seclusion, building materials were shipped, weather and tide permitting, or brought from Florence by wagon, a 4-5 hour trip. The project cost $80,000 and consisted of the lighthouse for the head light keeper, two assistant light keepers and their families, a barn, and two kerosene oil storage buildings (in case one caught fire, there was a secondary source).

The Heceta Head Lighthouse closed to the public in August 2011 for restoration and repairs and reopened after two years in June 2013. It's closed again due to ongoing maintenance and inspections of the upper levels. Only the outdoor area at the lighthouse base and the ground floor of the tower can be toured. The light is maintained by the Oregon Parks and Recreation Department (OPRD).

Another day, we traveled through several Oregon coastal towns, including Yachats, Depoe Bay, Florence, and Newport. Depoe Bay Harbor calls itself “the world’s smallest harbor” but is best known for the departure of whale-watching and charter fishing boats, which cross below the Depoe Bay Bridge headed to the ocean. A pod of resident grey whales can usually be seen at Depoe Bay, but not on the (very) foggy day we we there. 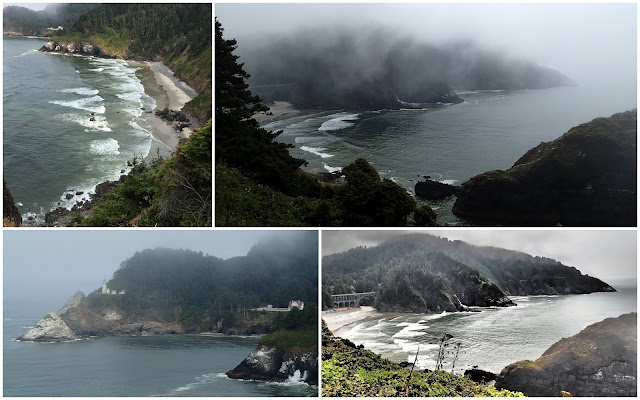 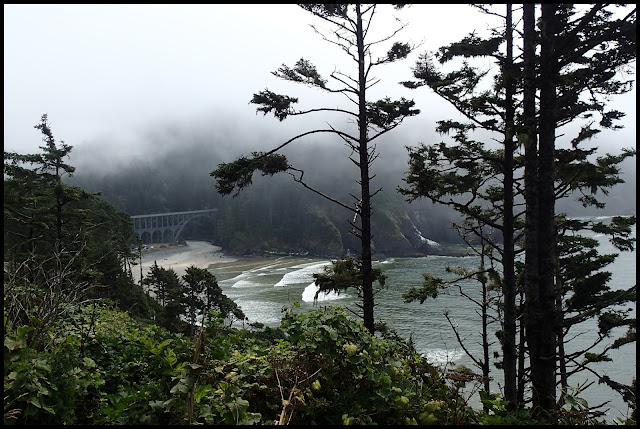 As east coast NJ natives, we’re familiar with the terms “going to the shore” or “going to the beach” but that’s not the case in Oregon where folks "go to the coast." Their Pacific Ocean is on the opposite side of our Atlantic Ocean and it's so much colder too. Many of the beach areas have rocks (some very large ones) that beachgoers need to walk on, before getting to a sandy area. 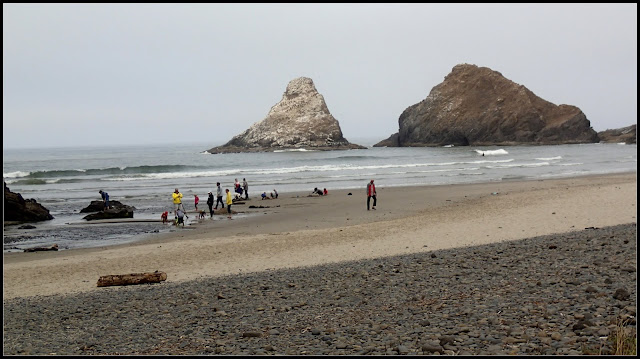 And, it's also a lot foggier at the OR coast, a lot of the time. The day we visited there was a heavy fog that started about mid-day. 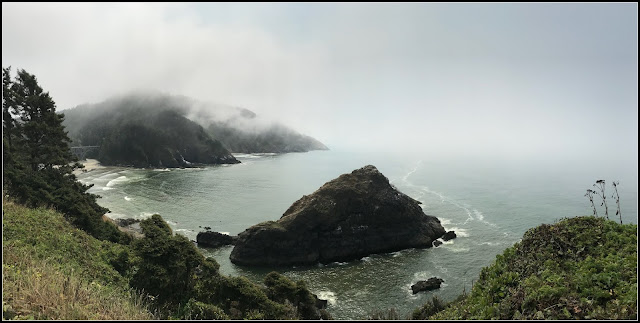 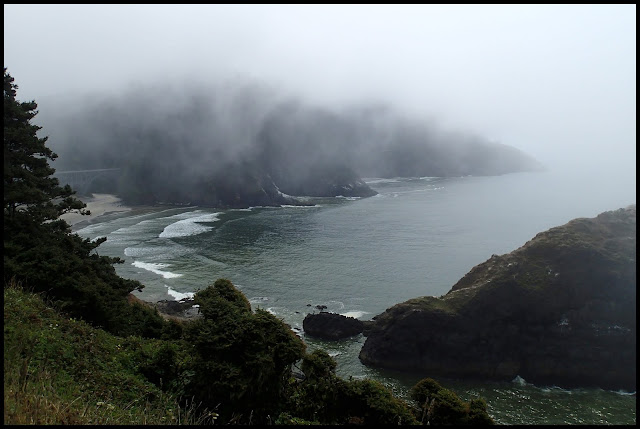 The Oregon Coast runs north–south along the Pacific Ocean and forms the western border of the state. The Oregon Coast stretches about 363 miles from the Columbia River in the north to the California state border in the south It includes the entire coastline of Oregon. 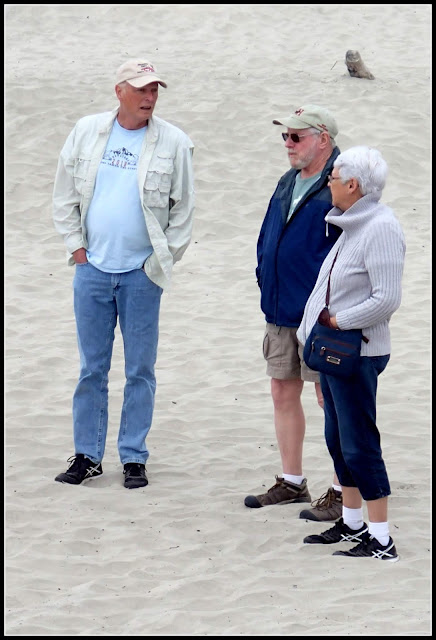 The Oregon Beach Bill of 1967 allows free beach access to everyone — unlike some NJ beaches. The “Beach Bill” grants a public access easement on the beach that cannot be taken away by the landowner; nor can the landowner build on the beach. In exchange, it excludes the beach landowner from any property tax obligation.

When in Oregon, a winery visit is a “must.” One of the "reasons" for our cross-country visit was because Tom and Nancy invited us for a glass of wine, so who were we (as good friends) to refuse an offer like that?

Wineries are small and decentralized. Most are located in valleys between the Cascade Mountains (stretching the entire length of the state) to the east and Oregon's Coastal Range to the west. 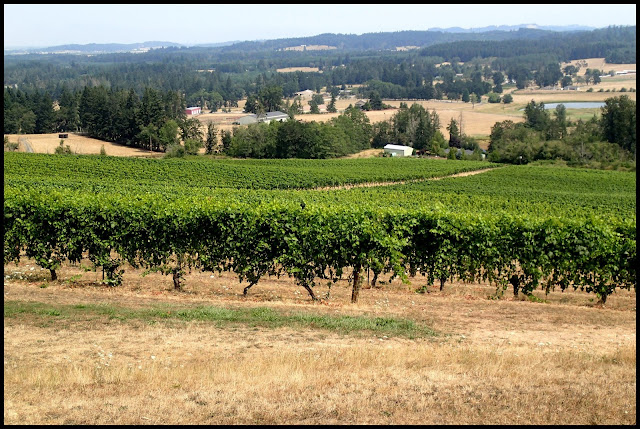 Wine making dates back to pioneer times in the 1840s with commercial production beginning in the 1960s. Today, Oregon has established an international reputation for its production of wine, ranking fourth in the U.S. behind CA, WA, and NY. Like most other U.S.produced wines, Oregon wines are marketed as varietals. (A varietal wine is one made primarily from a single named grape variety.) Oregon law requires that wines produced in the state be identified by the grape variety from which it was made, and must contain at least 90% of that variety. Oregon law does not allow use of place names for wines. 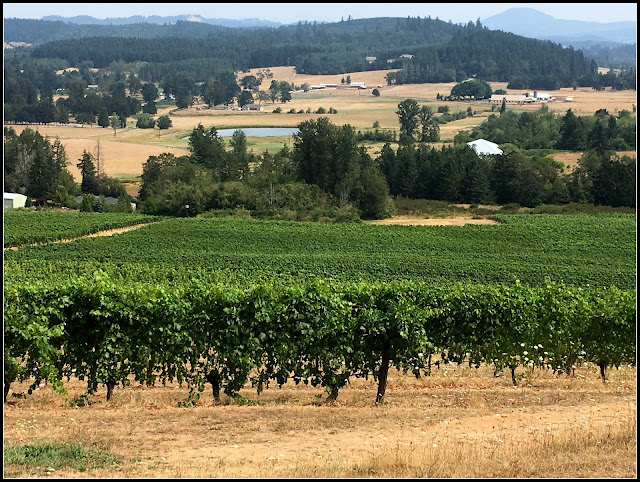 Pinot noir and Pinot gris are the top two grapes grown. Pinot noirs from the Willamette Valley have been lauded by wine connoisseurs and critics. Oregon is regarded as one of the premier Pinot-producing regions in the world with over 30,000 vineyard acres.

Oregon's  Willamette Valley is a great destination for wine lovers and tasters With 725 wineries to choose from in 150 miles, and we wanted to help out during our visit. 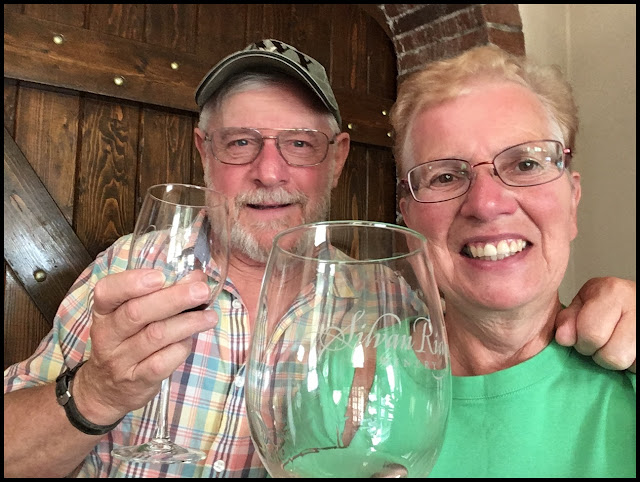 Cheers 🍷 the glasses contained samplings, which were very good. And being the good friends that they are, Tom and Nancy "gifted" us with a bottle for our anniversary celebration later this month.

all the photos are spectacular, and I think I am loving the panorama shots more than any of them, makes me feel like I am SEEING it...

I have learned a lot today. That coastline is so special to see. They sure do regulate a lot things around the coast and the vineyards. It would be nice to talk to family on the same time zine. It sounds like you had a great time on this west coast visit.

Your pictures show that the scenery is exquisite. My children have tried raising carnivorous plants several times but never with any success.

Your coast shots are stunning!

My brother lives in Oregon overlooking the Columbia River Gorge. I love the waterfalls and the rugged coast. I've really enjoyed your trip across our great country.

Interesting post, enjoyed reading it. I could do with some of those cobra lilies if it likes insects.

I envy your such joyous traveling dear friend :)

your friends look kind and sweet just like you guys!

what an amazingly beautiful and stunning place you visited!
this plant gave me shiver! quite scary ! never found here like them.

liked the awesome lighthouse ,so fascinating!

Wonderful photos and interesting information from the area there. I would have enjoyed seeing those plants up close too.

Your friends live in such a gorgeous area. What beautiful sights to see.

Those coastal towns look amazing. I loved the lighthouse.

Going to the coast - I like that! And the fog made for some lovely misty photos.