We're currently on a cross country road trip from New Hampshire to Oregon and posting about sites along the way. This post is about a stop in Boise, ID.

As noted in a previous post about our visit to the Madison, WI capitol, these are one of the best places to visit if you're in a state's capital city. Luckily, we were able to visit Idaho's state capital when we stopped in Boise. 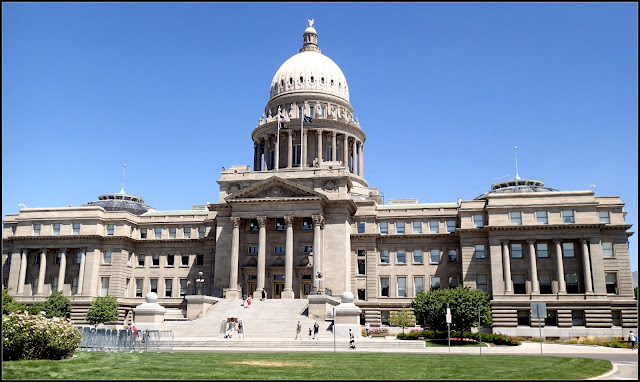 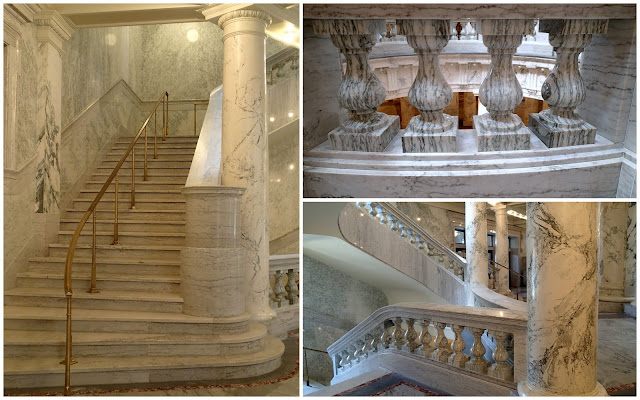 It's called the Capitol of Light.  The Renaissance Revival Capitol is Idaho's most significant historic structure. It functions as the seat of Idaho's state government, currently housing the executive and legislative branches and numerous state offices which occupy much of the approximately 190,000 square feet of usable space. 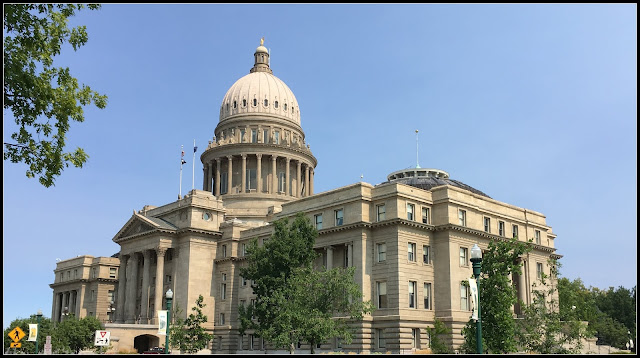 Tourtellotte designed the building using light shafts, skylights, and reflective marble surfaces to capture natural sunlight directing it to interior spaces. For him, light was a metaphor for an enlightened and moral state government. 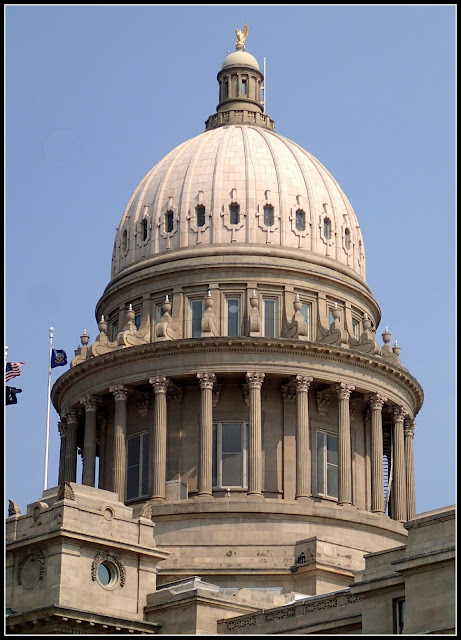 The dome of the Idaho State Capitol rises 208 feet atop the dome is a nearly 6-foot high bronze eagle.The Renaissance Revival Capitol is Idaho's most significant historic structure. It functions as the seat of Idaho's state government, currently housing the executive and legislative branches and numerous state offices which occupy much of the approximately 190,000 square feet of usable space. 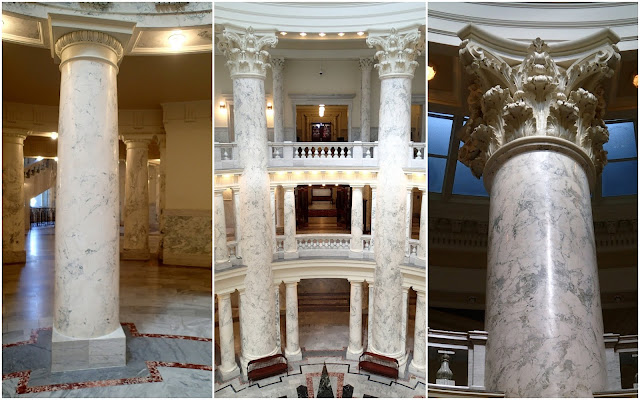 It was surprising to learn that the large columns supporting the rotunda look like solid marble, but have a finished surface composed of scagliola, a mixture of gypsum, glue, marble dust, and granite dyed to resemble marble. (Scagliola originated in Italy during the 16th century and grew in popularity as polished marble was expensive and heavy.) 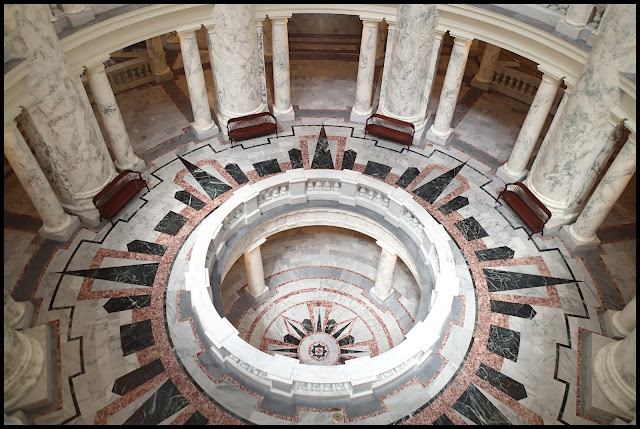 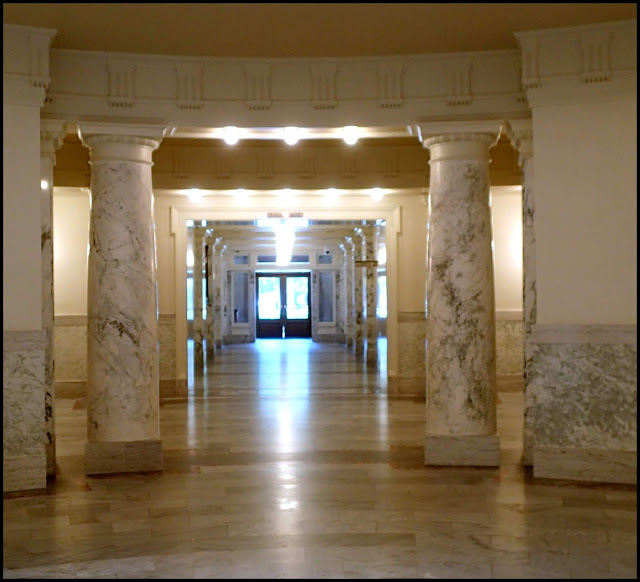 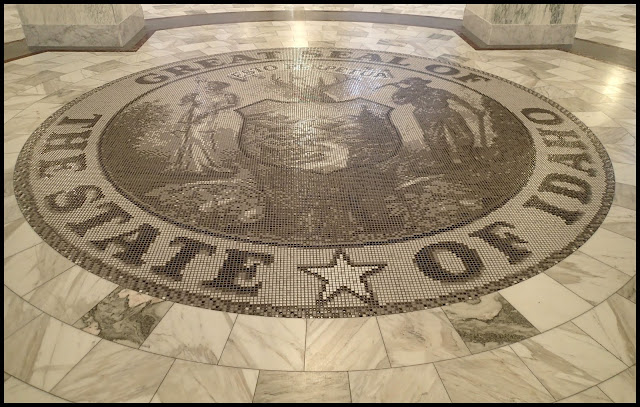 The Great Seal of the State of Idaho on the floor of the central rotunda was adopted in 1891 by the state legislature. 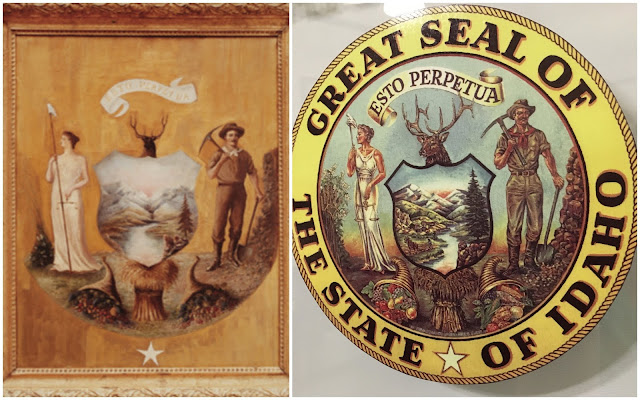 Idaho has the only state seal designed by a woman. The official state seal (which also appears on Idaho's state flag) is an update of a painting by Emma Edwards Green (of Boise City) that was selected as the design for the great seal of the state of Idaho in 1891. The current seal is an updated version commissioned in 1957. when it was colorized and streamlined, the female figure was modified and the miner's clothing was modernized. 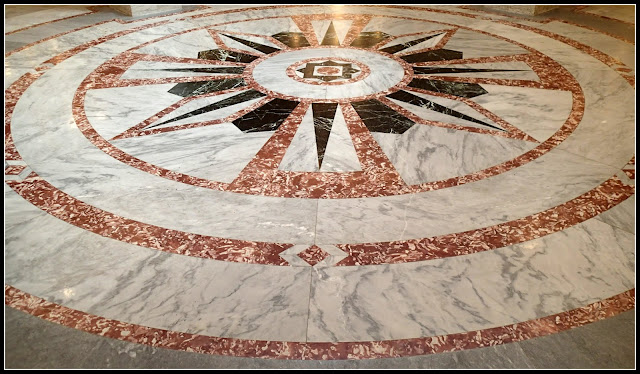 The first floor has a compass rose; the center has a sundial with minerals found in Idaho. 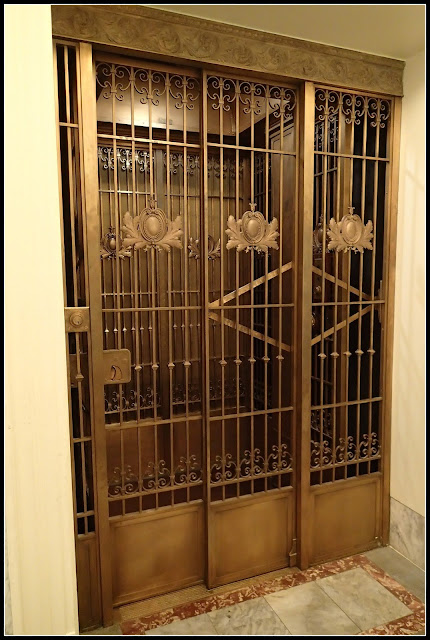 There's a private elevator (no longer in use) outside the Legislative Reference Library. It  transported judges to the Idaho Supreme Court Chamber, which was on the third floor, but is now in a new Supreme Court Building. 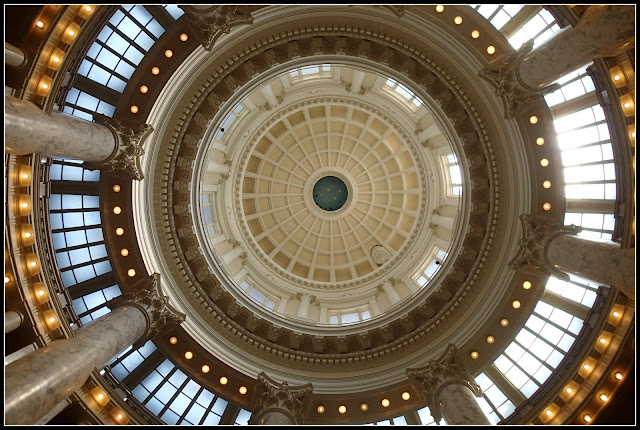 The rotunda rises to an opening at the top of the inner dome called the oculus (eye of the dome). Although it's hard to see impossible to make out from the bottom floor. There are 13 large stars representing the 13 original colonies; 43 smaller stars, represent Idaho’s status as the 43rd state. 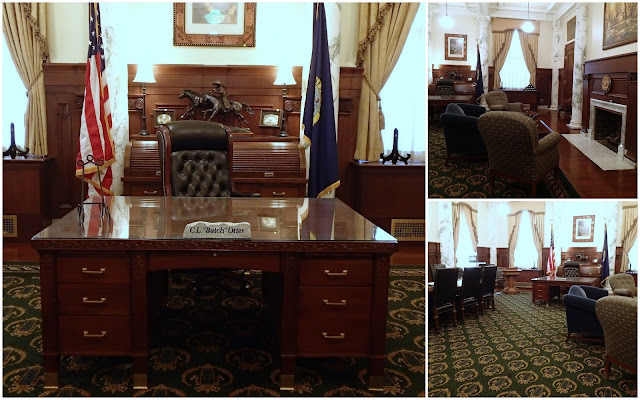 The second floor has offices of the the lieutenant governor and the governor. The current Governor C.L. (Butch) Otter was was not in his office the day we visited. 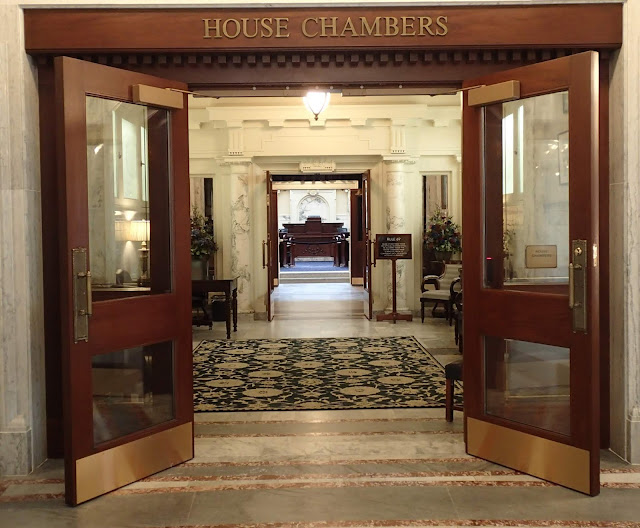 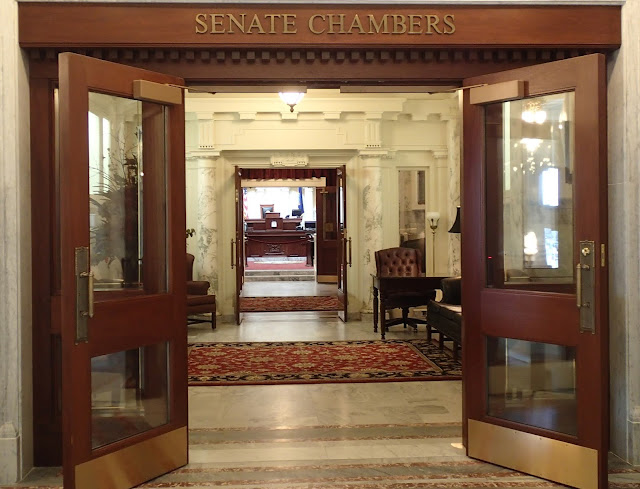 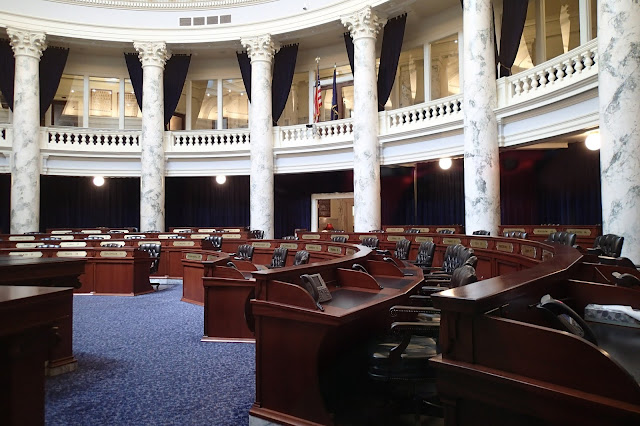 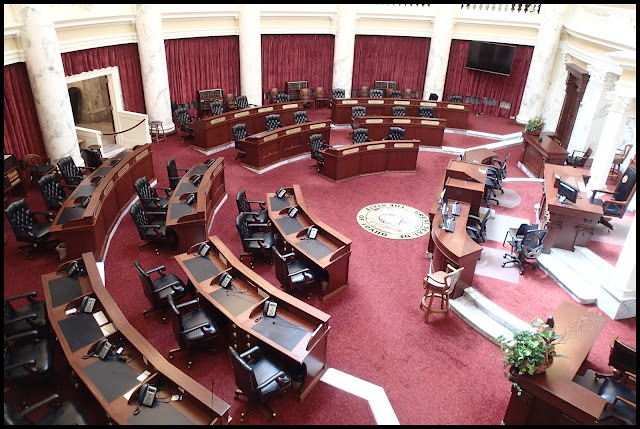 The third floor has the state's legislative offices: Senate in the west wing and House of Representatives in the east wing. The two chambers were remodeled in 1968.

The fourth floor has balcony entrances to the senate and house galleries. 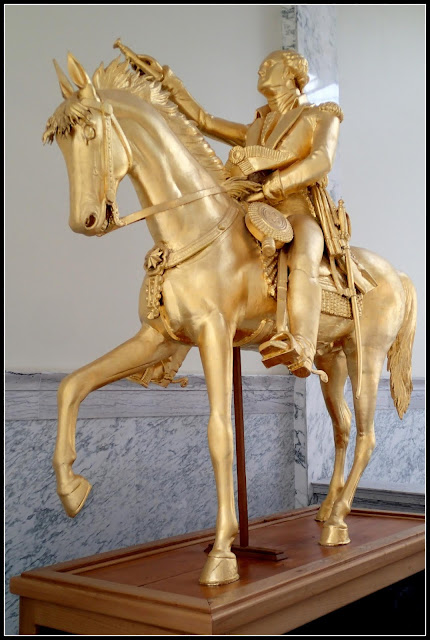 The capitol has two indoor statues. According to a nearby sign, George Washington was carved in 4 years from a single piece of pine by Charles Ostner who worked by candlelight from a postage stamp size likeness of the President (it didn't explain why). The statue was bronzed, presented to the Idaho Territory in 1869 and displayed on the Capitol grounds until 1934, It was brought indoors due to weather damage when it was repaired, restored, and covered with gold leaf in 1966. (We wondered why it took so long to bring a wooden statue indoors.) 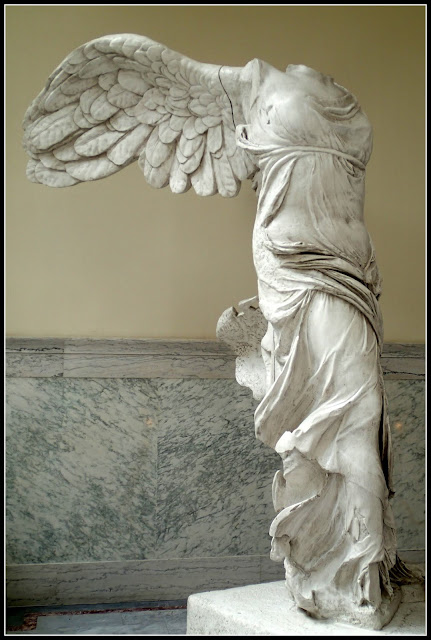 The second statue is a replica of Winged Victory of Samothrace. Idaho received this replica from the Merci Train, which was sent to the U.S. in 1949 by France to express appreciation for supplies that Americans sent after WW II. Boxcars filled with gifts were sent to the capital cities of each state. Idaho’s boxcar included this replica of Winged Victory of Samothrace. 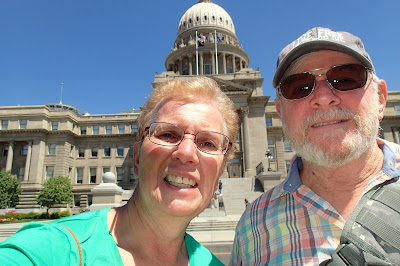 Visitors like ourselves can take a free self-guided tour of the capitol by using a guide. It's provided in the visitor center which is located in the renovated basement of the capitol. The center features displays about Idaho history and includes a small gift shop.

Capitol tours are available but need to be scheduled in advance since they are conducted by volunteers.
Posted by Beatrice P. Boyd at 7:00 AM

What an absolutely fantastic building. Thanks for sharing the tour with us.

I’m loving your trip! As it happens, we will be driving back to Texas after our Alaskan cruise and our route will take us to Boise, Idaho. I’ve never been to Idaho or Montana Or Wyoming and we will be going through these states. Plus Oregon and Washington but I’ve been there before. Love the way you guys travel....

What an amazing building. I must thank you for sharing your wonderful trip with us all. I am seeing things that I will probably never see for myself so it is a delight to be able to share your tour.

I like that stairs collage, all of it. and if it was 2 million back then, I shudder to think what I twould cost today

Another beautiful building. I really liked the statues.

I love this road trip. The details about the Idaho capital is amazing. I think I prefer the original State Seal over the new version. The old version makes it more historical. I been through Boise, ID but didn't really stop to visit the city. We zoomed by it on freeway...sad but true. thank you for sharing.

Beautiful inside and outside!
Great idea to visit state capitals!

Nice tour. I'm always amazed at how ornate these buildings were made. They are always interesting to visit.