A Death Funds a Capitol

We're currently on a cross country road trip from New Hampshire to Oregon and posting about sites along the way. This post is about a stop in Salt Lake City, UT.

As noted in previous posts about our visit to the Wisconsin capitol in Madison and  the Idaho capitol in Boise, these buildings are among the best places to visit if you're in a state's capital city for many reasons, including they're FREE to tour.

The Utah State Capitol in Salt Lake City was the third capitol building we’ve visited to date. It's very impressive in both detail and symmetry. 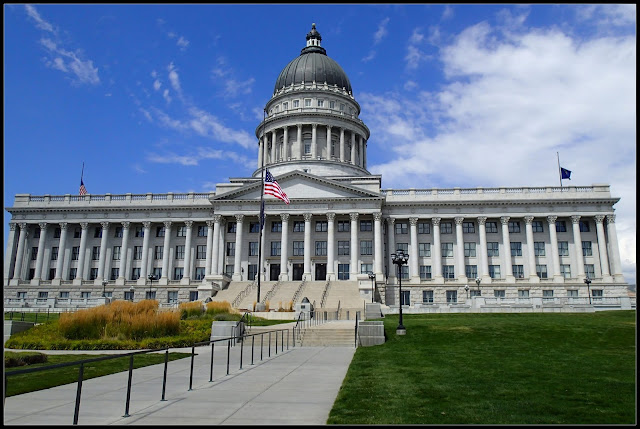 In 1888, Salt Lake City donated 20 acres of land (known as Arsenal Hill due to its previous use for munitions storage) to the Utah Territory for the construction of a statehouse. In 1909, years after Utah became the 45th state in the Union in 1896, the state legislature approved a Capitol Commission to oversee design and construction of a state capitol.

A $2.5 million budget was set, but funding was an issue and construction might not have started if not for the death of Union Pacific Railroad President E. H. Harriman in 1911. The state received nearly $800,000 in estate inheritance taxes; the legislature approved  a $1 million bond, and the building project was underway. 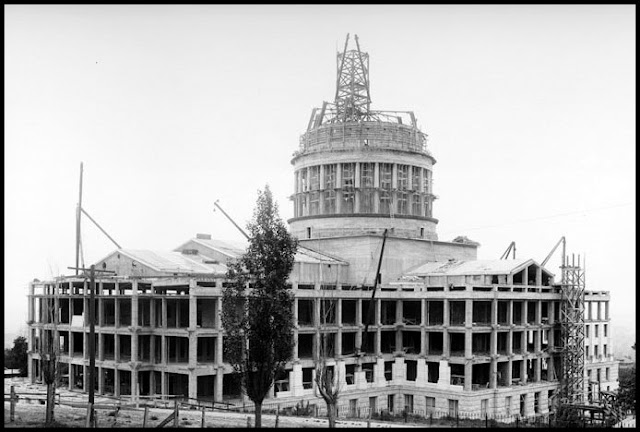 A design competition was won by Utah architect Richard K.A. Kletting and construction began in 1912 and was completed in 1916. The neoclassical revival style design draws on ancient Greek and Roman roots, traditional architecture symbols of American democracy. 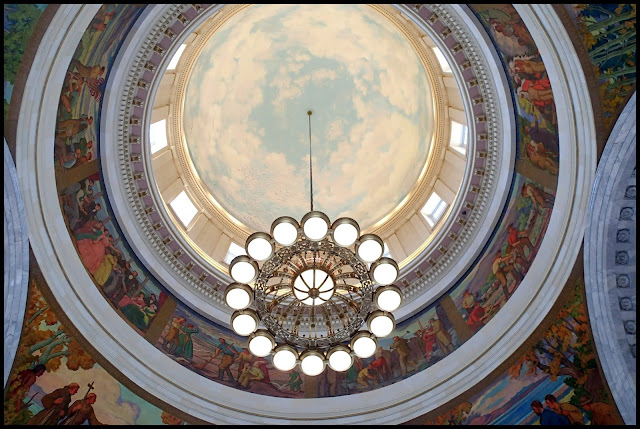 The interior dome of the rotunda reaches 165 feet at its peak and seagulls fly across the blue sky. The rotunda was left unfinished for nearly 20 years until Depression era Public Works of Art project funded art commissions for the Capitol. The circular cyclorama depicts scenes from 19th century Utah life. 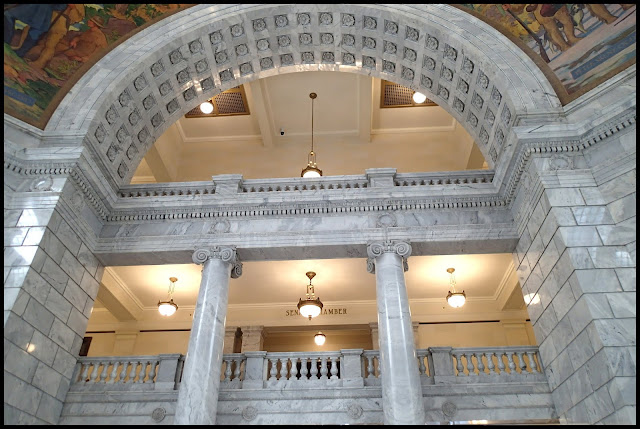 The half-moon paintings at the east and west ends of the large vaulted atrium were among the first commissioned artwork in the Capitol and are titled The Passing of the Wagons and Madonna of the Covered Wagon. 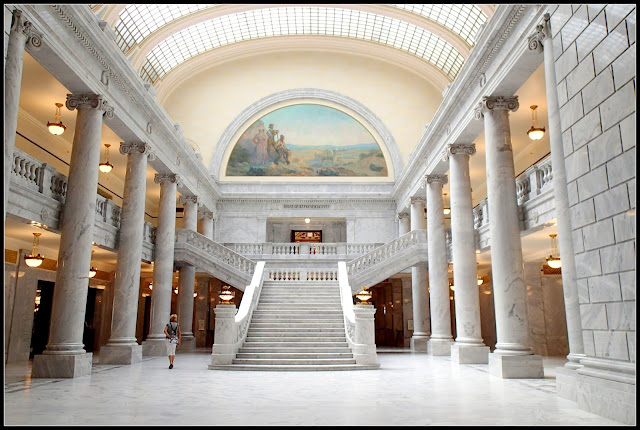 Fifty-two Corinthian columns made of local granite quarried from Little Cottonwood Canyon in Wasatch-Cache National Forest line the outside of the building. 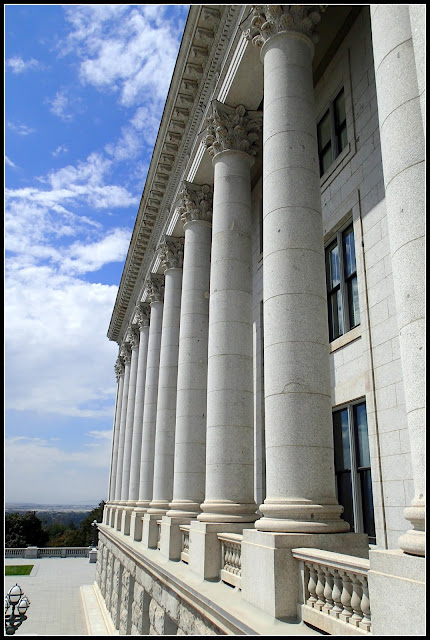 Financial difficulties prevented Kletting’s designs, which included steel-reinforced concrete, from being realized. Nearly 100 years later, a major renovation (2004-2008) restored the building’s beauty and completed more of his original plans. Seismic base isolators (265) were installed below the Capitol to improve safety and protect against earthquake damage, allowing the building to survive up to a 7.3 magnitude earthquake. 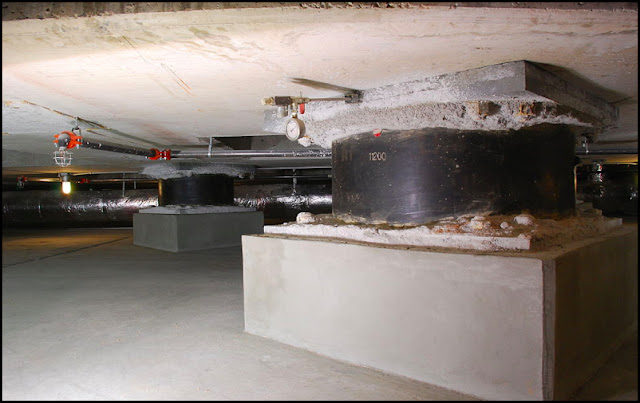 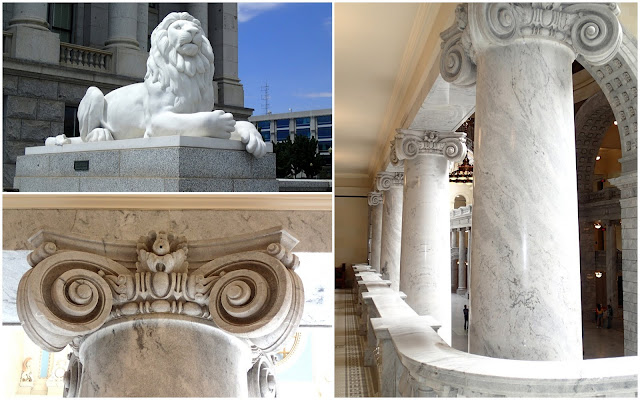 The Capitol Hill complex contains Senate and House chambers, the working offices of top state officials, and a ceremonial supreme court chamber. Inside the Capitol and around its grounds are various original artwork, artifacts, and historical monuments.

Kletting had recommended four classical statues to symbolize values and ideals crucial to Utah's culture (arts and education, immigration and settlement, land and community, science and technology) during the restoration, artists fulfilled this vision. Each of the 11-foot bronze statues features an adult mentor and youthful learner. 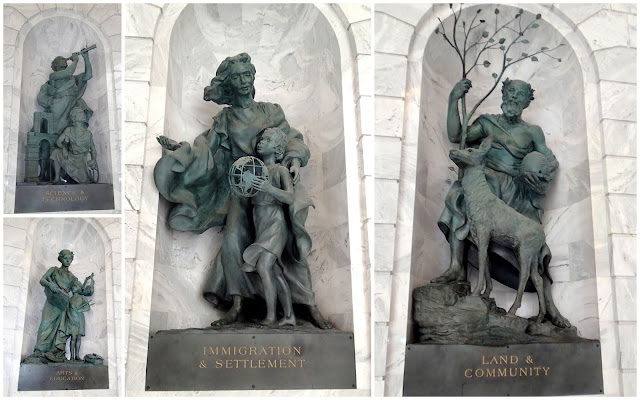 Unfortunately, we didn't have as much time to explore this capitol as we did the previous Wisconsin and Idaho state capitols. It was included on a city trolley tour and limited time was allowed inside. (If you have a chance to take a city tour, select a "hop-on, hop-off" one so that time can be spent really seeing a sight.) 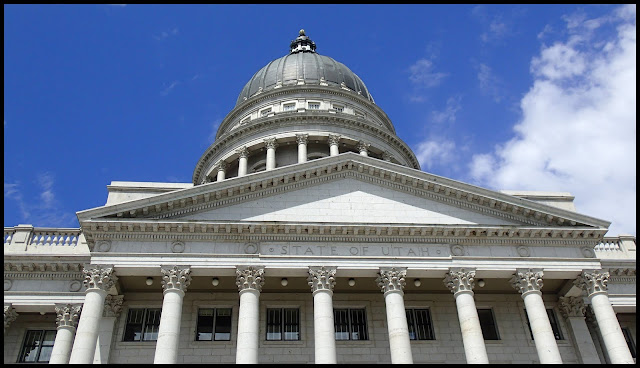 The Utah State Capitol was added to the National Register of Historic Places in 1978.

BIG Thanks to all for the yesterday's well wishes on our 19th wedding anniversary. We spent the day relaxing and not doing a lot of sightseeing (a nice change). We went out for lunch and enjoyed a glass of wine and a movie in our hotel room in the evening. It was a perfect day for us.
Posted by Beatrice P. Boyd at 7:00 AM

What a beautiful building inside and out. Lots of thought and hard work put into it. Thanks for sharing, and have a nice Wednesday.

Another great place that you have enabled me to see, I do thank you for taking us along with you. Glad you had a nice anniversary.

Such a pretty and unique building. I like the scenes depicted in the rotunda.

Capitol buildings are always beautiful. They have gorgeous architecture and exquisite artwork.

An impressive structure indeed. Must have been amazing to see the inside. I have often said we should take the hop on hop off tours around Washington DC. Even though we know the city well, it would be fun to take our next set of visitors. Happy Traveling!

Sightseeing is exhausting so I'm glad to hear you enjoyed quiet time together on your Anniversary (Happy belated, by the way). The capital buildings are unbelievable!!...:)JP

That's quite a big state capital. But impressive. Thanks for sharing.

This is a wonderful building. I don’t know if people working there know how magical that place is with its design and style.