We're currently on a cross country road trip from New Hampshire to Oregon and posting about sites along the way. This post is about a stop in Rawlins, WY. 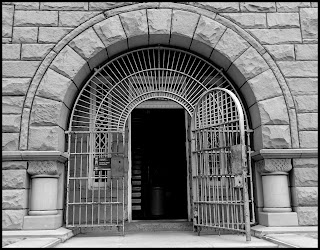 We hadn't planned to visit another penitentiary after visiting the Old Idaho Penitentiary, which was depressing enough.

That said, this stop at the Wyoming Frontier Prison in Rawlins, WY, just happened that way. As we were driving along I-80, the prison showed on the map as a point of interest. And, of course, we decided to stop in for a tour.

It's a vast place and depressing to say the least. An estimated 13,500 inmates were kept here during the prison's years of operation from 1901 to 1981.

The cornerstone for what became Wyoming’s first state prison was laid in 1888, two years after the territorial Legislature approved a $75,000 appropriation, but due to funding issues and Wyoming’s notorious weather, the doors wouldn’t open for 13 years. It's a fortress-like penitentiary. Depressing enough when in use, it's grown more dismal over the years with crumbling concrete and peeling paint. 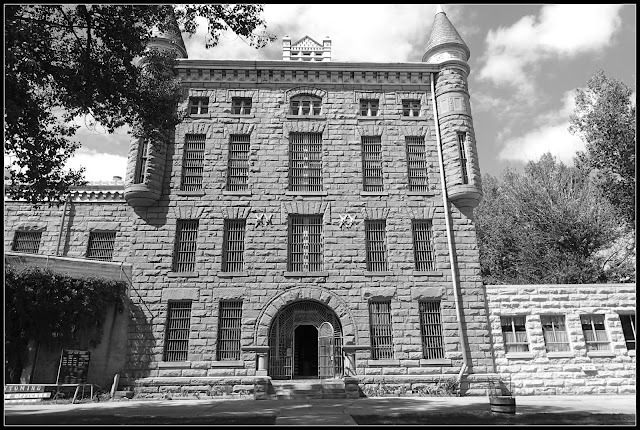 During our tour, we learned that 250 people died here. Fourteen men were executed, others died of natural causes, committed suicide or were victims of inmate violence. 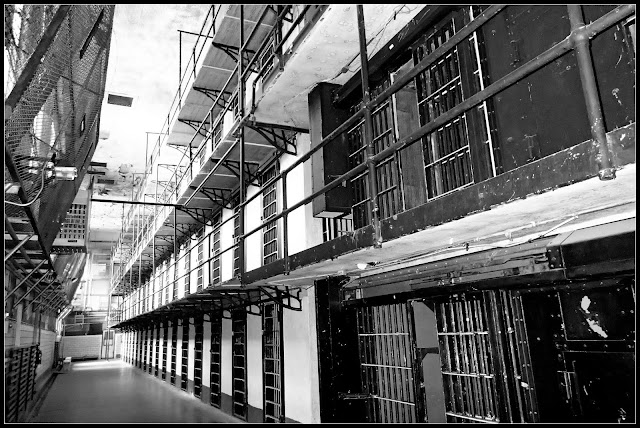 In December 1901, the prison opened with 104 cells (Cell Block A), no electricity or running water, and very inadequate heating. The first inmates arrived in December 1901, when male prisoners were transported by train from the Wyoming Territorial Prison. Women convicts were added in 1902 and served their sentences in a separate ward. They were only housed at the prison until 1909 when transferred to Colorado. 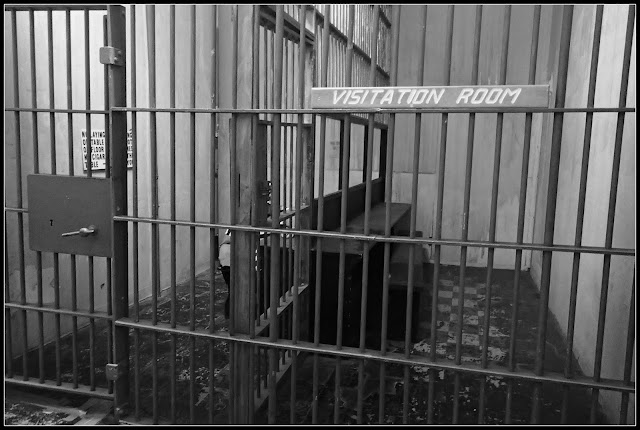 Overcrowding was a constant issue, and the first of several additions to the penitentiary was completed in 1904, adding 32 cells to the west end of the original cell block. 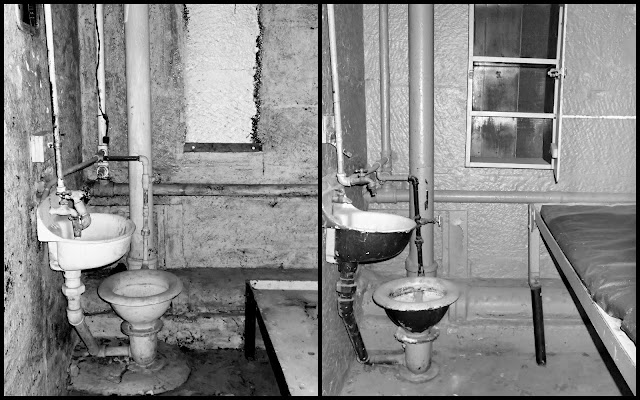 A prisoner uprising occurred in 1912 because of deteriorating conditions. A second cell block, constructed in 1950, included hot running water and cells for solitary confinement. In 1966, a 36-cell maximum security addition was built. 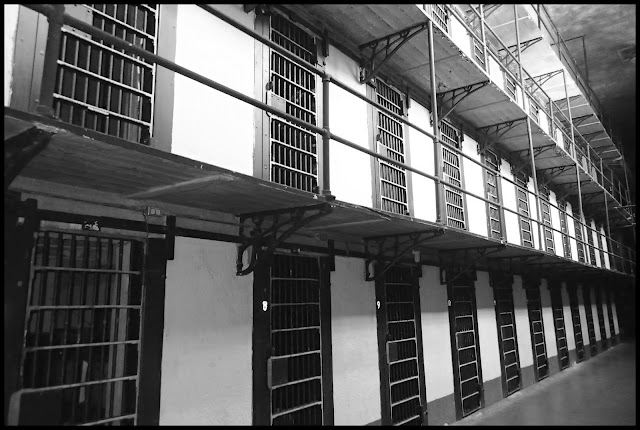 We toured the now weed-filled prison yard which once contained baseball and basketball facilities. The catwalks which guards once patrolled are still there. 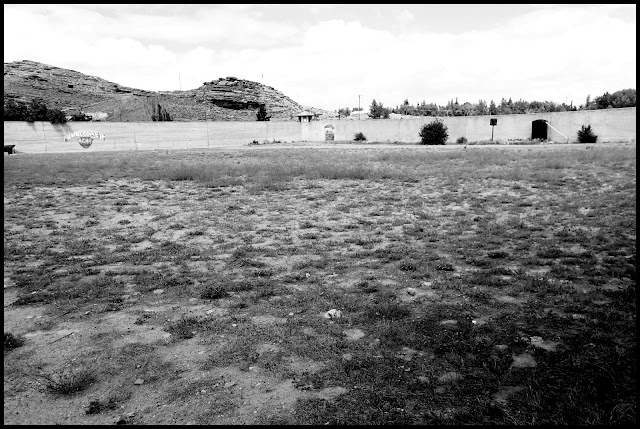 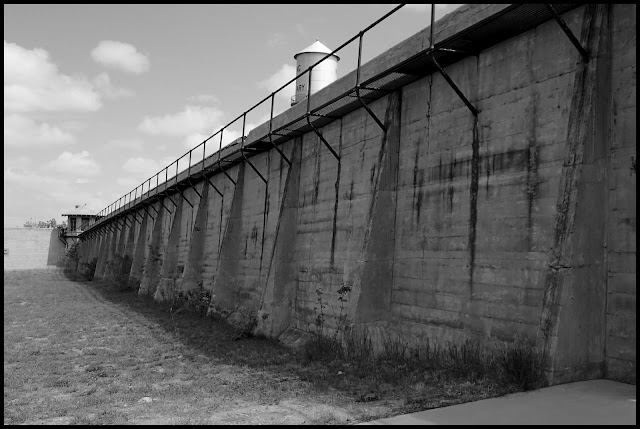 Our tour led us past the remains of several factories on the prison grounds.From 1901 through 1917 the prison had a broom factory; inmates burned it down during a riot. 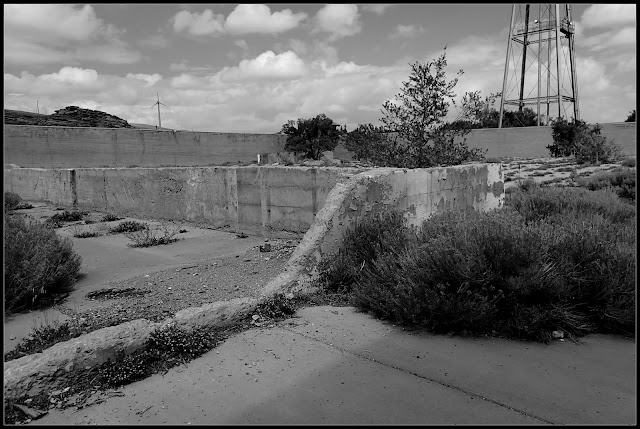 The factory was rebuilt and operated as a shirt factory which brought the state revenue until 1934, when a federal law was passed that prohibited the sale and transportation of prison-made goods inter-state. The factory closed and 193 was re-opened as a woolen mill which won an award (“Navy E”) in 1942 for the superior quality blankets produced for the military during WW II. In 1949, the prison changed production one last time, producing license plates until its closing in 1981. 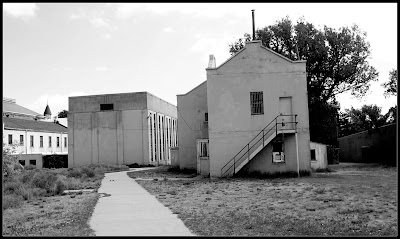 In 1916, the penitentiary added a “death house” which consisted of six cells to house inmates on death row, and an indoor version of the "Julian Gallows."

To spare a hangman any pangs of conscience and to avoid paying an executioner, a  Wyoming architect James Julian, was commissioned to design a new "humane" gallows. Using this method, a condemned prisoner hung himself by standing on a trap door that opened when his body weight forced enough water out of a counter-balanced bucket. (We saw a demo in the gift shop and, yes, it was as awful as it sounds.) 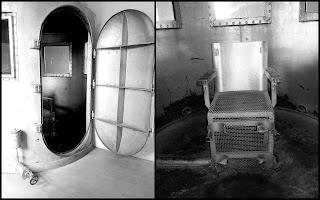 In 1936, the prison added a gas chamber when it replaced hanging as Wyoming’s method of execution.

In total, the prison carried out 14 executions; nine men were hanged, and five were executed in the gas chamber by the use of hydrocyanic acid gas.

(Visitors are allowed to sit in the gas chamber, but we declined this offer.)

The addition of the second cell block in 1950 temporarily relieved overcrowding, and included solitary confinement cells, a much more efficient heating system, and hot running water which wouldn’t be installed in the original cell block for another 28 years. 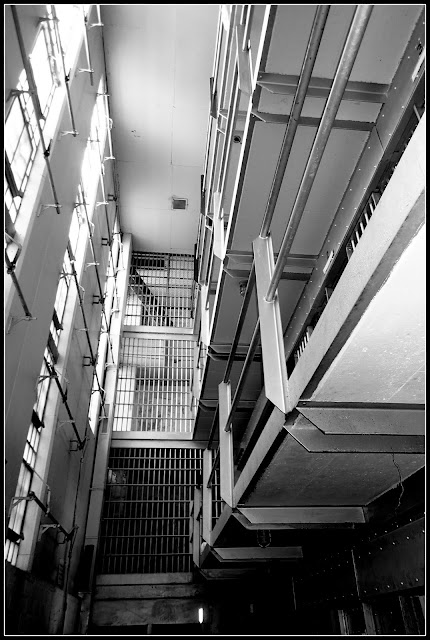 A maximum security addition was completed in 1966. This addition included 36 cells and was reserved for serious discipline cases. 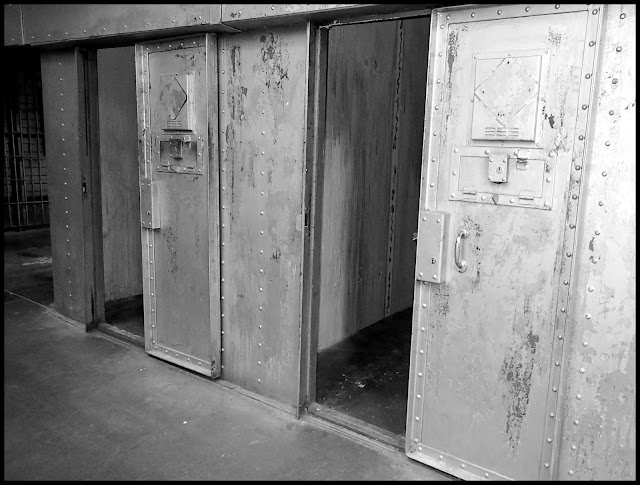 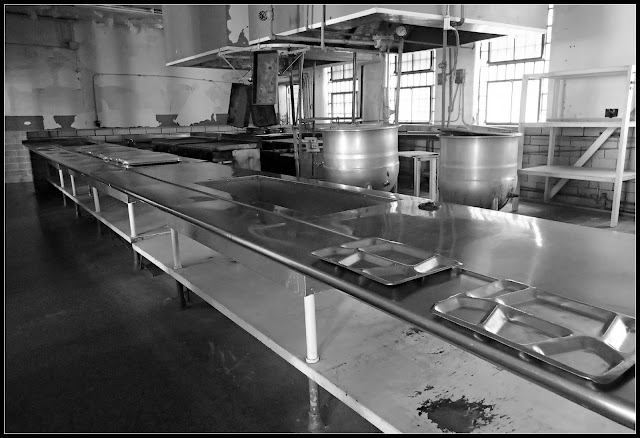 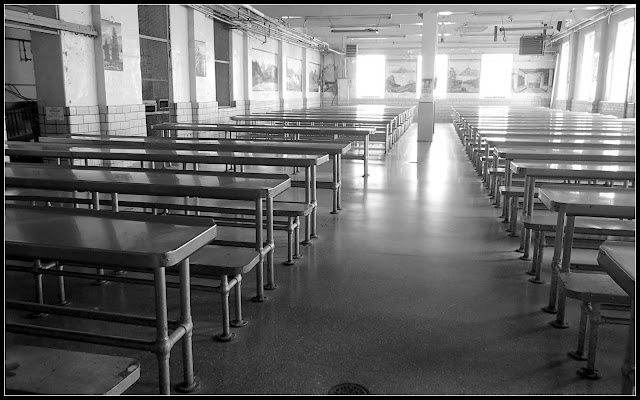 The prison closed in 1981, after serving the state for 80 years It sat abandoned until 1987 when a low budget movie was filmed on location and caused damage to the prison which was not yet a historic site. In 1988, the Old Pen Joint Powers board assumed ownership of the penitentiary, renaming it The Wyoming Frontier Prison and establishing it as a museum. 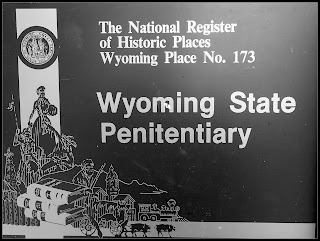 It's listed on The National Registry of Historic Places and "welcomes" an estimated 15,000 visitors annually. There's a small museum  where highlights include a doll-sized working model of the "humane" Julian gallows and a display of rope samples from successful hanging.

After visiting  prisons in two different states, we can say we don't plan to add any future ones to our "must-see" places. Once is enough and twice was even more so.

And, as before, just make sure you leave with everyone you came in with. This fellow was once again briefly incarcerated. Happy to say, he made a complete get-away. 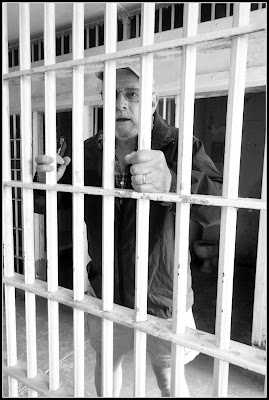 I would not want to visit this, even the photos are depressing to me.. the outside of the building is nice architecture but the inside is horrible.

I'm with Sandra. I don't think I could look at the inside of a prison, no matter where it was.

Prisons are definitely depressing to say the least. I visited the Tennessee State Prison once and it did me in. I agree with you, two prisons is enough for a lifetime. Thanks, however, for sharing....it was interesting.

Yeah. Our one visit to the Kingston Pen last year was enough for me.

You two have become a couple of jailbirds!

The odd time I've been in the former jail here (now serving as a hostel), I've wondered how on earth anyone would want to stay in there.

A formidable place, but foreboding.

It's interesting how many prisons are now open for tours. I should say historic prisons. Looks like it was an interesting stop.

Such a sad and dreary place. I'm not sure I'd want to visit there. Kind of spooky to be there too knowing so many have died in that place.