Home of the Fighting Irish

As  first-time visitors to the University of Notre Dame in South Bend, IN, we were looking for several landmarks on the 1,250 acre campus. Getting distracted is easy as it’s listed as one of the most beautiful of any university in the U.S. We would have to agree with that consensus after our visit.

The university provides free walking tours of the campus, which are conducted by current students. Our tour guide was Maggie, a sophomore, who was well acquainted with the campus as her parents and four older siblings priced here. We walked the campus for over an hour with 10 others at a brisk pace. And, we did see the campus highlights: the Basilica, Golden Dome, Grotto of Lourdes, and "Touchdown Jesus." 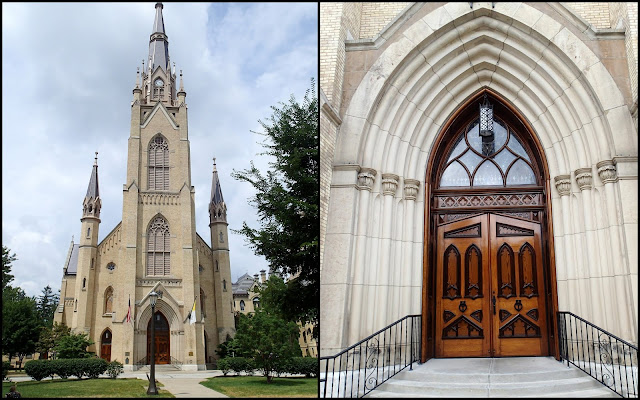 The Basilica of the Sacred Heart serves as the mother church of the Congregation of Holy Cross in the U.S. It's built in the Gothic Revival style and designed in the form of a cross, 275 feet long and 114 feet wide. Construction started in 1870 and the first mass was celebrated in 1875. 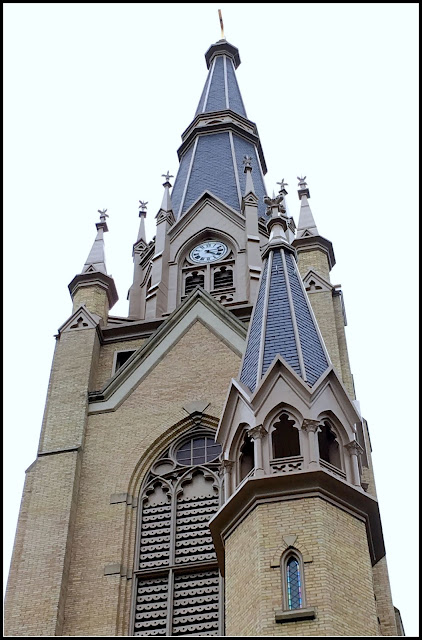 The 218-foot tall bell tower completed in 1892 contains a bass bell, weighing 6 tons and is the oldest carillon in North America. consisting of 23 bells. It replaced the original tower and bell which toppled from the wind. 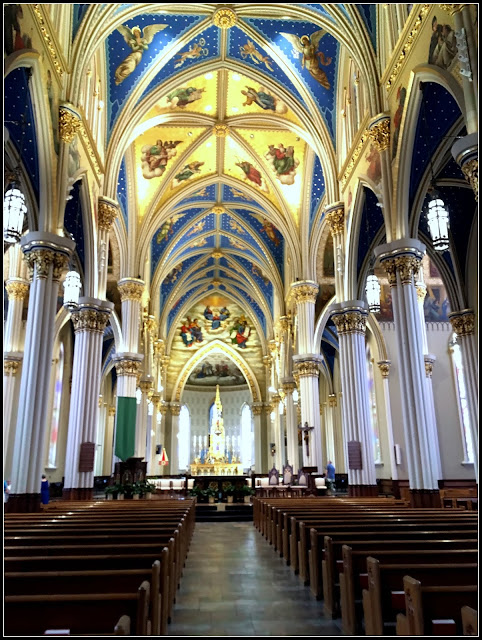 Walking in front door, its beauty was astounding. It was easy for us to see why the Basilica is ranked among the most beautiful university churches in the U.S. and worldwide. 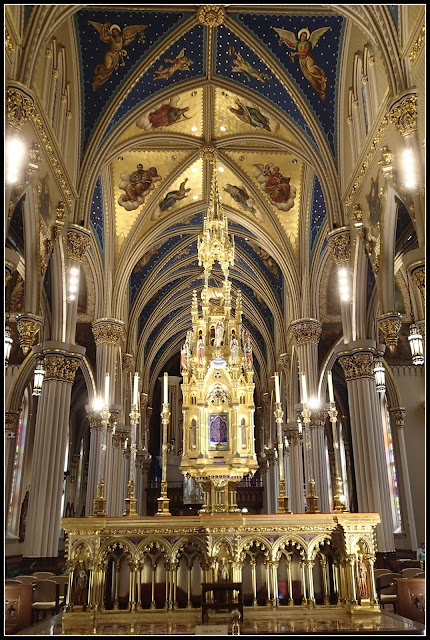 The bronze tabernacle was built in Paris for the Centennial Exposition in Philadelphia. After the Exposition ended, it was purchased for the church. The high altar was designed and created between 1882 and 1886 and is in white marble. 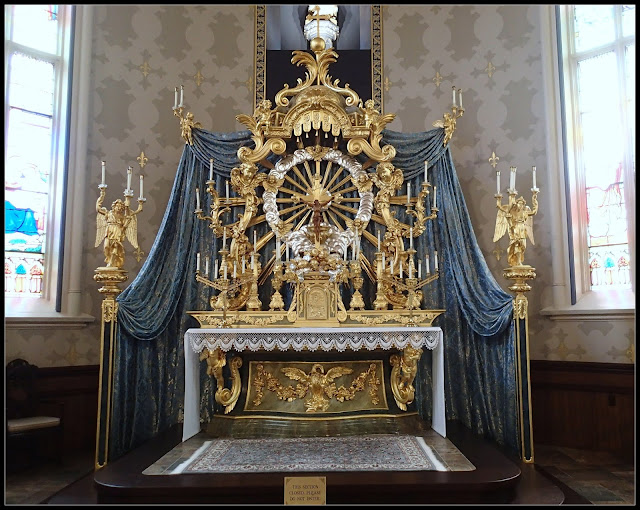 The Lady Chapel, located behind the main altar is the other most prominent alter. There are also seven side chapels, each one has an alter and beautiful artwork surrounding. 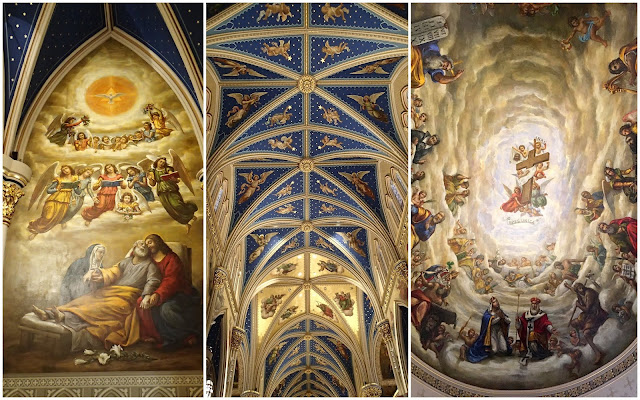 We learned that the Basilica artwork includes 114 life-sized pictures of saints, 44 stained glass windows and 56 murals. All were  completed over a 17-year period by resident artist Luigi Gregori, professor of art at Notre Dame. The Basilica ceilings are filled with a starry sky with angels, and the walls are decorated with figures of saints. The photos cannot full capture the beauty. 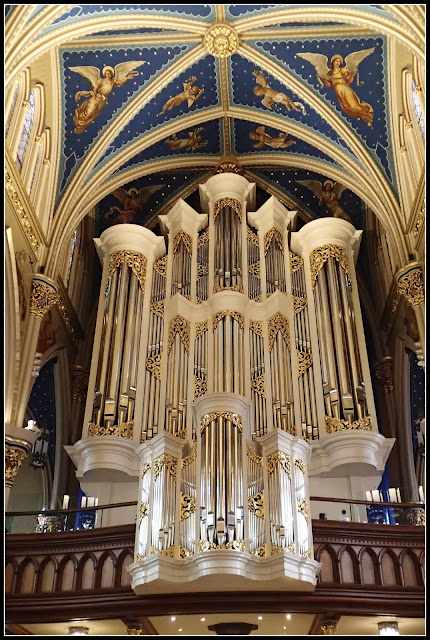 The (very large and imposing) new pipe organ was installed in 2016 and  named Opus 37 by organ builders Paul Fritts and Company (not sure why). It boasts 4 keyboards, 70 stops, and 5,164 pipes, stands 40 feet high and weighs over 20 tons. Workers had to reinforce the loft to support the larger organ. (The original pipe organ was removed in and donated to a local parish.) 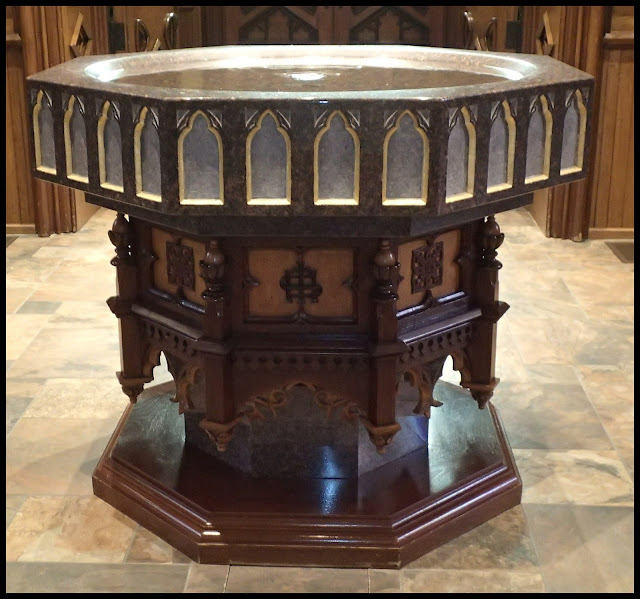 The original baptismal font, built in 1874, sits at the entrance of the Basilica. 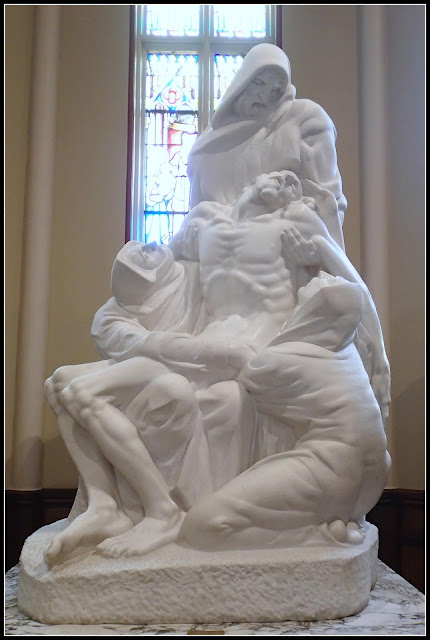 The Pieta sculpture of Mary holding Jesus after his crucifixion death was created by renowned Croatian sculptor Ivan Mestrovic, who taught and worked at Notre Dame. 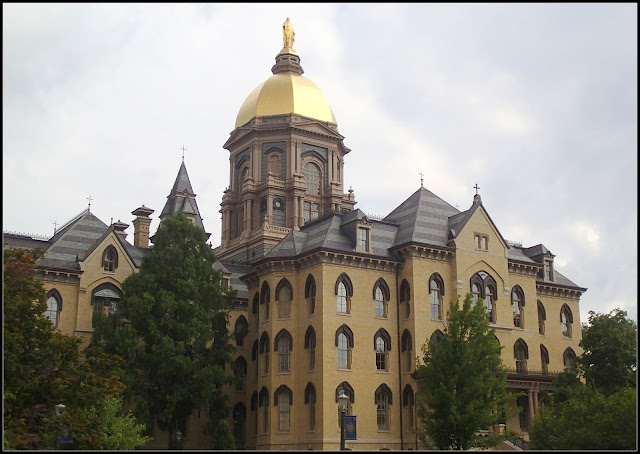 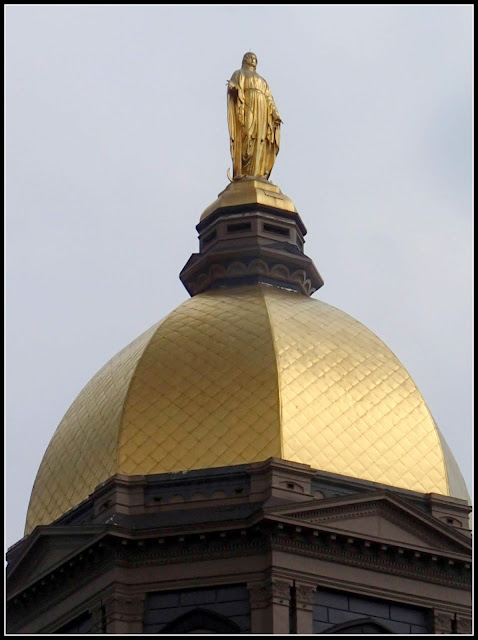 The Main Building, used mostly for administration now, is best known for its golden dome with a statue of Mary, Mother of God, on top. It was built in 1879 after the original building was destroyed in a fire. The building is on the National Register of Historic Places and is the most prominent building associated with Notre Dame. 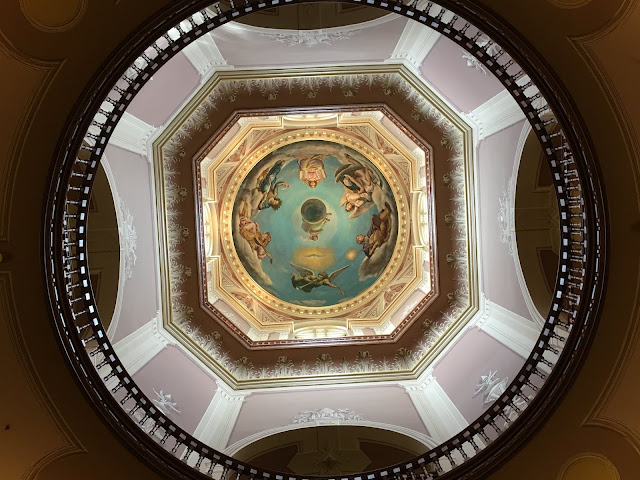 The dome has been re-gilded five times, most recently in 2005 and at a hefty cost at a cost of $300,000. Inside the building, we looked at the inside by standing in the center to see the beautiful mural inside the dome. 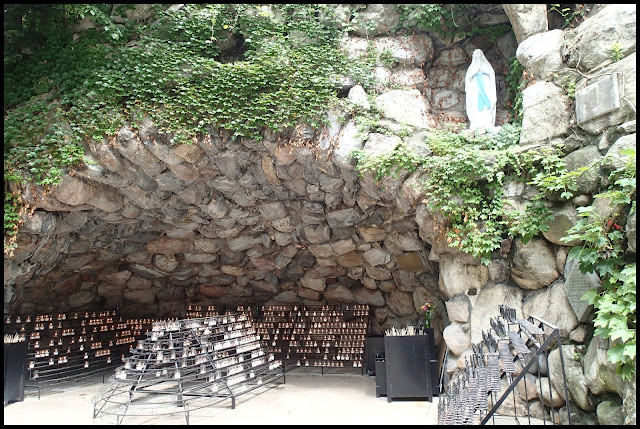 The Grotto at Notre Dame is a one-seventh size replica of the Grotto of Our Lady of the Lourdes in France, where the Virgin Mother appeared to St. Bernadette in 1858. The rosary is prayed at the grotto every day at 6:45 p.m. and we learned there are more regular prayers during college exam time. Candles are lit by visitors and there is a requested donation. 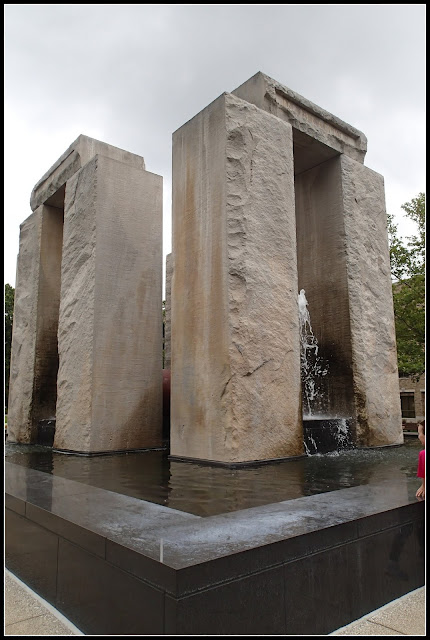 Other works of art are scattered throughout the university campus, a few of them stand out due to sheer size. The Stonehenge Fountain above is one; it's a memorial to Notre Dame alumni who serving in the military. 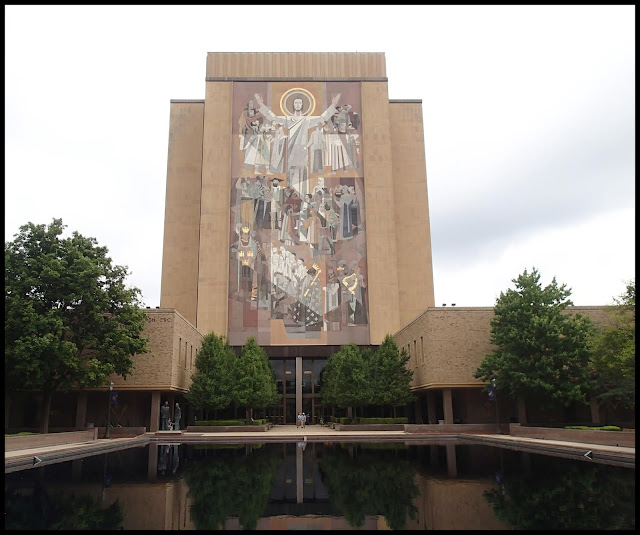 At the Hesburgh Library in front of a reflecting pool, there’s a large and very well known mural titled The Word of Life. But anyone visiting Notre Dame looks for it by its more familiar — Touchdown Jesus. The story goes that the artist designed the mural so that Jesus was at the top with arms upraised, surrounded by some of the greatest theologians, doctors and teachers beneath. Touchdown Jesus is known to millions who have never been near the university stadium. (If you watch a Notre Dame game note how long it is before they show some or all of the mural.)

We skipped a tour inside the football stadium, which was a separate cost ($20 each) and opted to walk around the exterior where we saw the stadium’s 12 gates, each of which is named after a winning coach. Notre Dame has 11 national championships, so one gate remains unnamed. 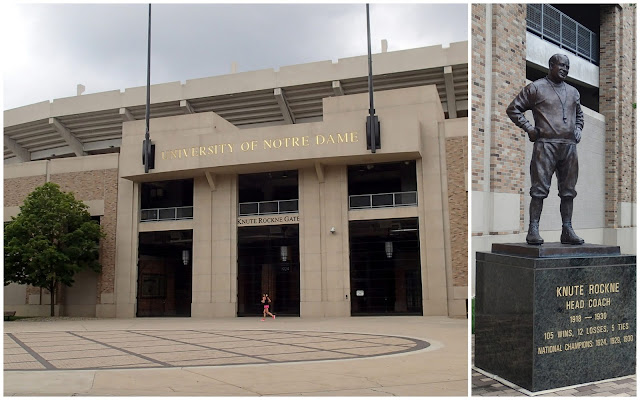 A status of football coach Knute Rockne stands outside the football stadium close to a gate named after him (center one above). Rockne made the Fighting Irish a major factor in college football and is regarded as one of the finest football coaches in college history who is credited with inventing the forward pass. 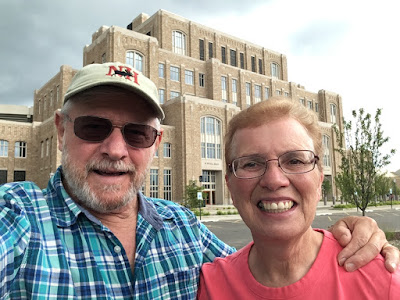 We spent an extra day in South Bend, IN due to thunderstorms which postponed our walking tour of the university's campus. The delay was definitely worth it.

Thanks to all who have been following our cross country adventures We have enjoyed reading your comments and are happy that you have joined us. Welcome to all first-time visitors as well.

The blog is lagging behind where we actually are on a given day due to travel, stops ,and posting...keep traveling along as there's much MORE to come.

Also, I'm trying to keep up on reading your blogs, but don't have enough time to leave comments.
Posted by Beatrice P. Boyd at 7:00 AM

I would love to visit the campus of Notre Dame and see Touchdown Jesus. I have seen it on tv many times during football games. The Basilica is breathtaking and would love to see it as well. Thanks for sharing this beautiful campus with us.

glad you are not having problems with all the storms all over the country and made it through and had fun surviving it. awe inspiring organ. wow..

I had no idea there were so many interesting sights at Notre Dame. The Basilica is beautiful.It must have filled you with awe to step inside and see all that artwork.

The basilica is magnificent!

I am so in awe of Notre Dame. I have never seen it either outside or in and your descriptions are just wonderful. I am so happy to come along with you and thanks for taking us all. Can't wait to see what's next.

Great post! The Basilica of the Sacred Heart is magnificent, wonderful to see in your photos.

Such beauty, you took us on a truly wonderful tour today.

What a beautiful university and church.