Elegance and grandiose are terms that apply to two mansions we toured while visiting South Bend, IN. These grand homes were built and occupied by local industrialists and their families. Unfortunately, through the years, one has fared better than the other.

Copshalom (shown below) was the family home of Joseph Doty (J.D.) Oliver, president of the Oliver Chilled Plow Works founded by his father, James, inventor of the “chilled” plow in 1857. The company that James Oliver later founded, Oliver Farm Equipment Company, become one of the largest corporations in South Bend, IN 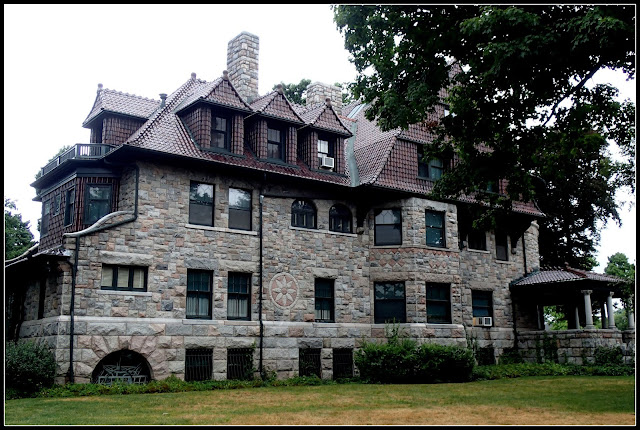 The company was one of the world's largest producers of farm plows during the late 19th century. By the turn of the 20th century, the company had over 1,000 emplyees and produced nearly 300,000 plows per year under the slogan “Plowmakers for the World.” 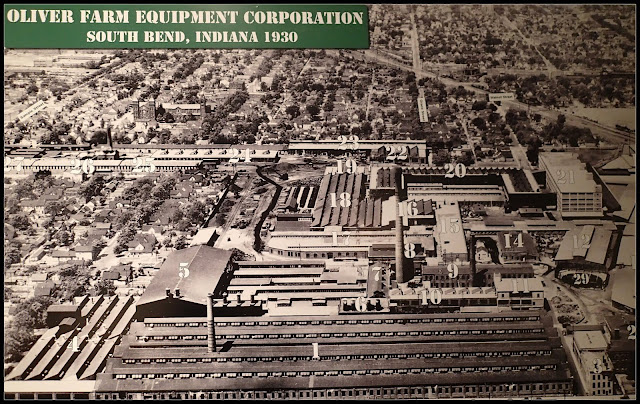 There was even a line of Oliver toys to rival those of John Deere. 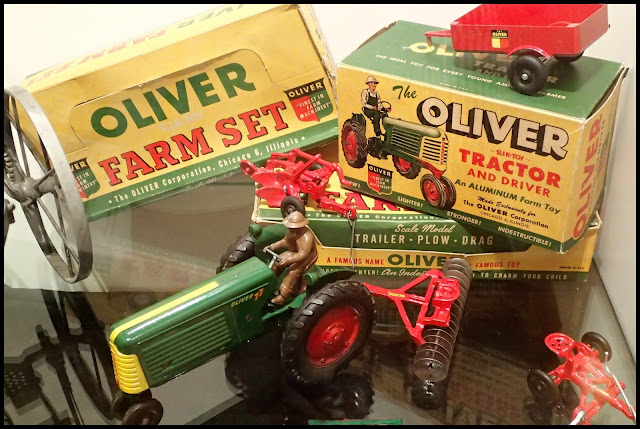 In 1886, J.D. Oliver, his wife Anna, and their four children moved into their 38-room, 12,000 square Romanesque Queen Anne home which was named Copshalom after the Scottish village where James Oliver was born. The furnishings on three floors are original to show how the mansion looked during the 72 years the Oliver family lived there. 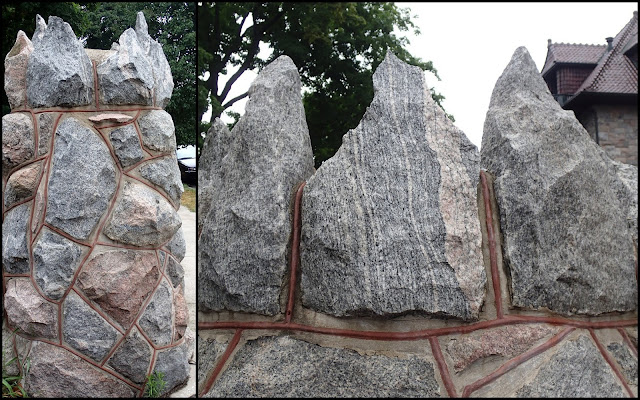 Copshaholm was constructed of native Indiana fieldstone which was transported and cut on site by skilled European stonemasons. 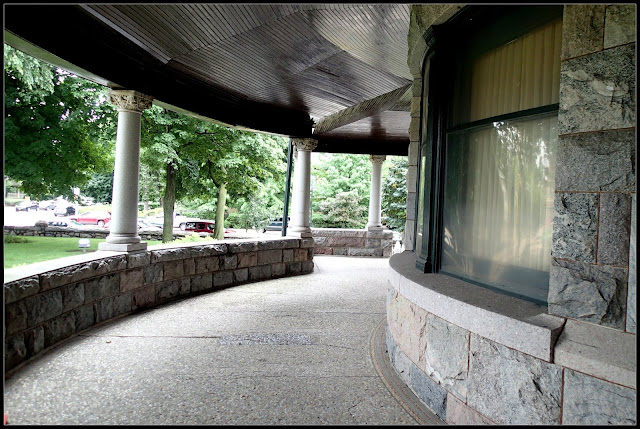 Since we live in New England, we were happy to find out that the 14 granite columns that support the veranda roof came from Vermont. The roof is of red tile and pressed copper. 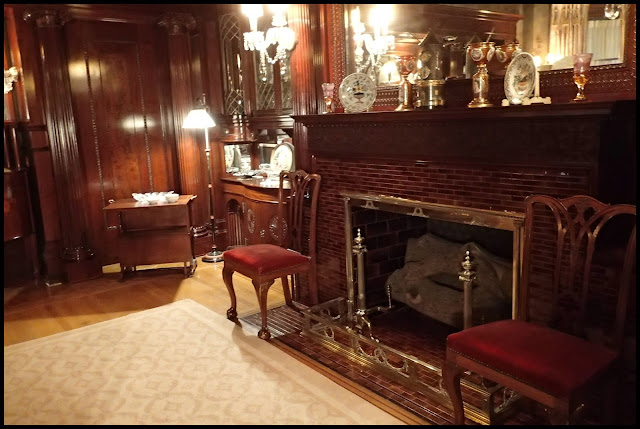 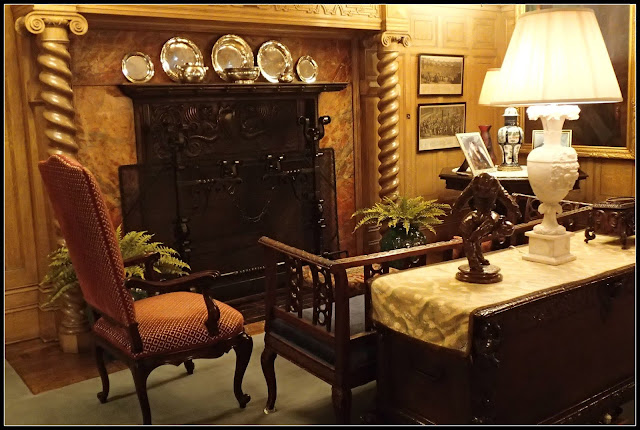 The mansion has 14 fireplaces, 10 bedrooms, and 9 bathrooms. Most of the woodwork was American oak; mahogany, cherry, birch and pine were also used. 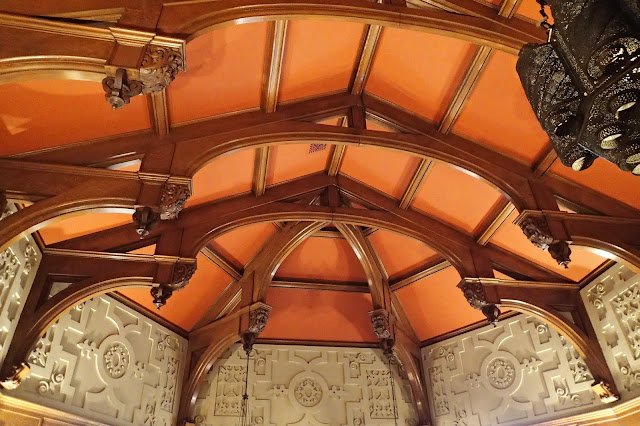 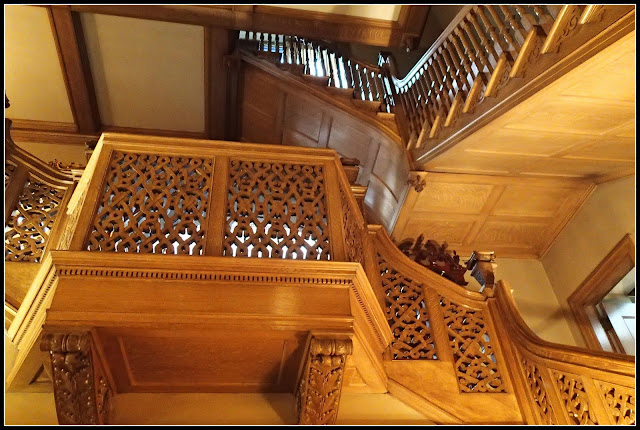 The house was first lit by gas and within a few years, it was one of the first homes in South Bend with electricity. Two coal fired boilers in the basement of the adjoining carriage house heated the house. 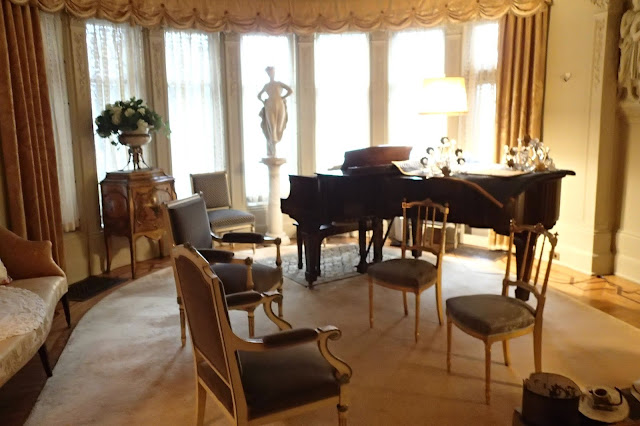 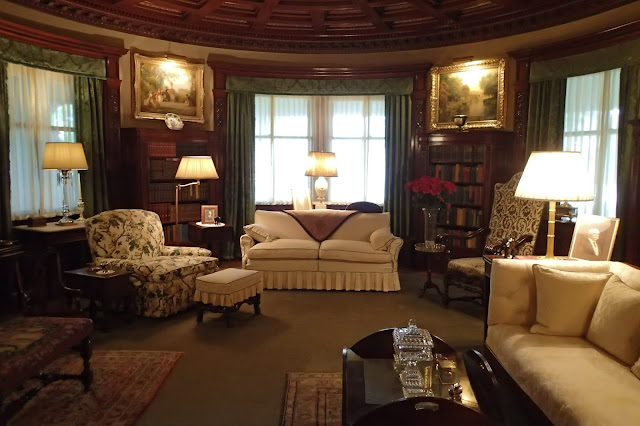 Copshalom is furnished in period porcelains, glass, silver, prints, and statuary. The Olivers spared no expense as stained and leaded glass windows and lighting fixtures were from Tiffany Glass and Decorating Studios in NYC. 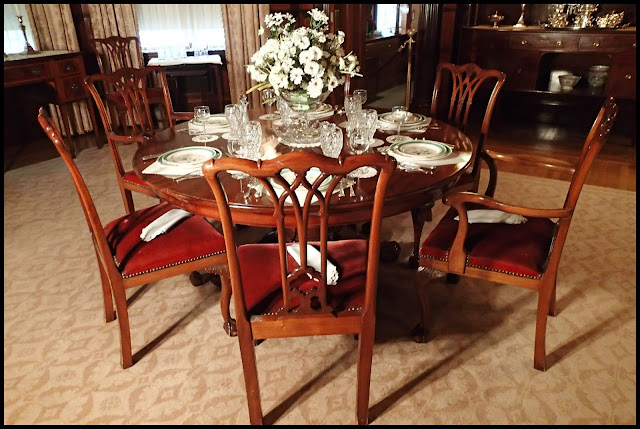 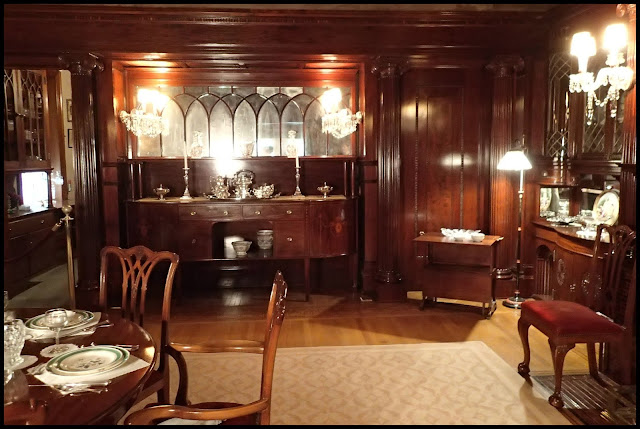 The dining room was one of the more formal rooms in the home and it's where the Oliver family dined together for most meals. 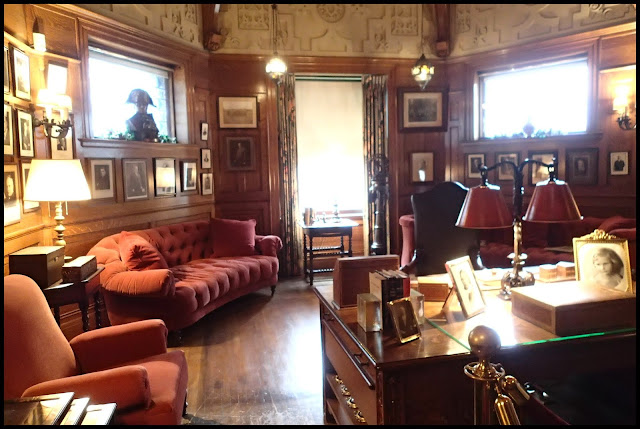 The den was J.D. Oliver’s personal study. The hammer beam ceiling and plaster relief give the room an English tone. The fireplace in this room (not shown) is the largest in the house. The family’s Christmas tree was always placed in this room.

As in many large homes, the butler's pantry was located behind the dining room and the kitchen was directly behind for ease of serving. 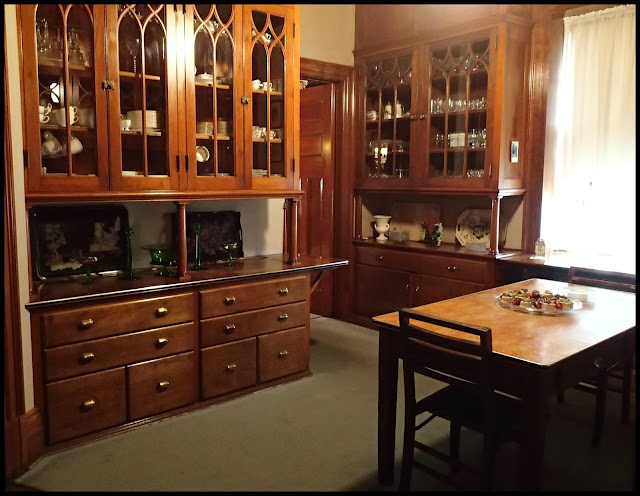 The kitchen was large and only half of it is shown below. It included a 10-door ice box, later converted to refrigerators. 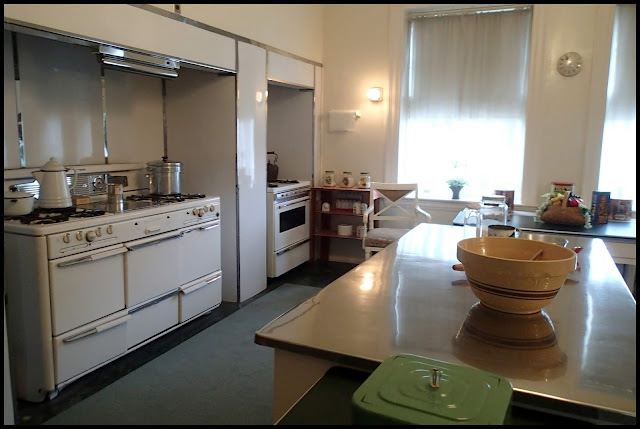 As befitting mansions of the time, there was also a carriage house built at the same time as Copshalom in a similar style. The ground floor was divided into areas for horses, carriages and equipment. The second floor held a servant’s apartment and storage. The basement housed boilers for heating the mansion and the carriage house. A connecting tunnel carried heating and electrical cables. (The carriage house was open when we visited, but a neighborhood yard sale was being held in it.) 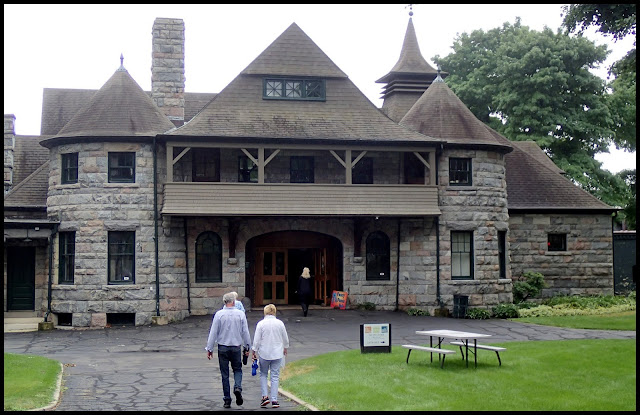 After the death of the last Oliver child, Katherine, the Oliver's grandchildren donated the mansion and all its furnishings to the The South Bend History Museum which conducts tours. The day we visited the mansion, a FREE tour was being given in conjunction with a neighborhood event. (Unfortunately, it only included the first floor that day.)


Tippecanoe (shown below) was the grand family home of Clement Studebaker, co-founder and president of Studebaker Corporation which in the 1800s was then The Largest Wagon Manufacturer in the World (automobiles came later). 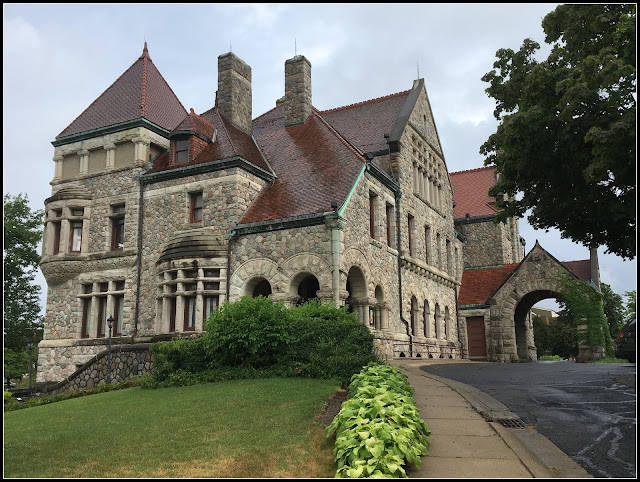 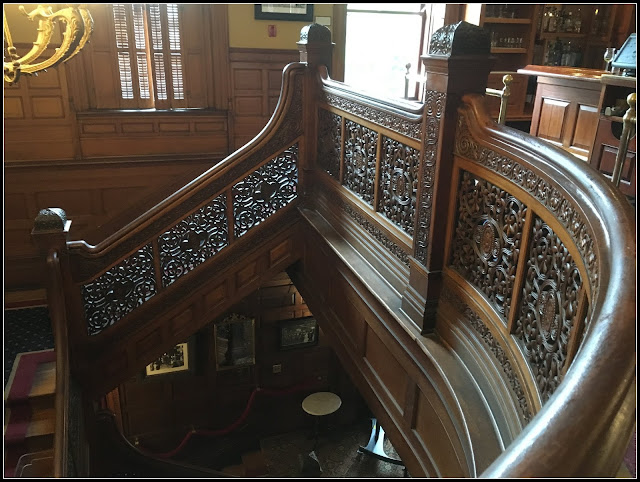 The mansion occupied slightly more than 3 acres. It was built on a bluff, and the carriage house and conservatories were on additional acre in the back. Tippecanoe had  40 rooms and 20 unique fireplaces on four floors. Construction costs were estimated at $250,000 with an additional $100,000 dedicated to furnishings and art collection. 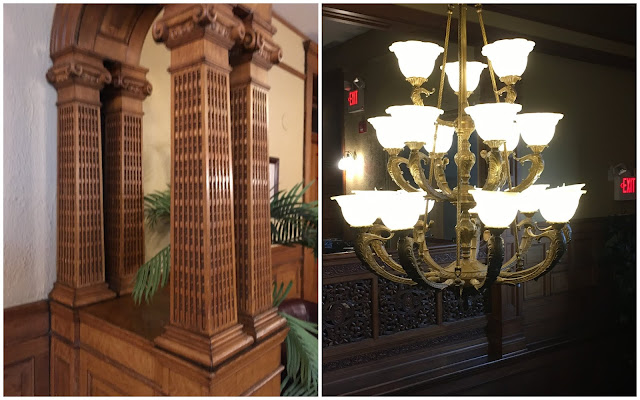 About the mansion's name — Studebaker was close friends with President Benjamin Harrison, grandson of William Henry Harrison who led U.S. forces to victory at The Battle of Tippecanoe in 1811. After Harrison was elected president, he ordered five new carriages from Studebaker Manufacturing Company. Due to this friendship, Studebaker named his elegant South Bend home in honor of Harrison’s grandfather. 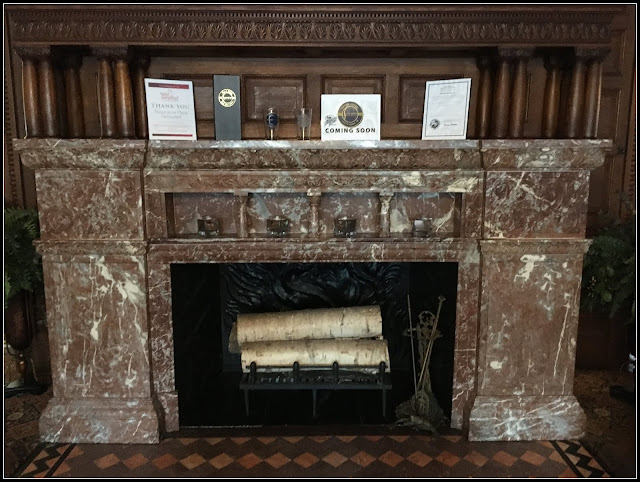 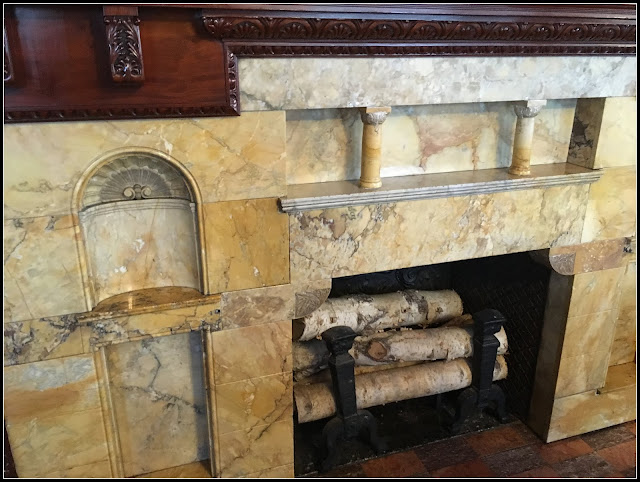 Tippecanoe had  40 room and 20 unique fireplaces on four floors. Construction costs were estimated at $250,000 with an additional $100,000 dedicated to furnishings and art collection.

Unlike Copshalom, the mansion no longer contains its original furnishings which were auctioned to pay off debts, after Clement's son, George, declared bankruptcy and abandoned the property in 1933. However there are some remaining traces of its former ownership, like the "S" on the front door knob. 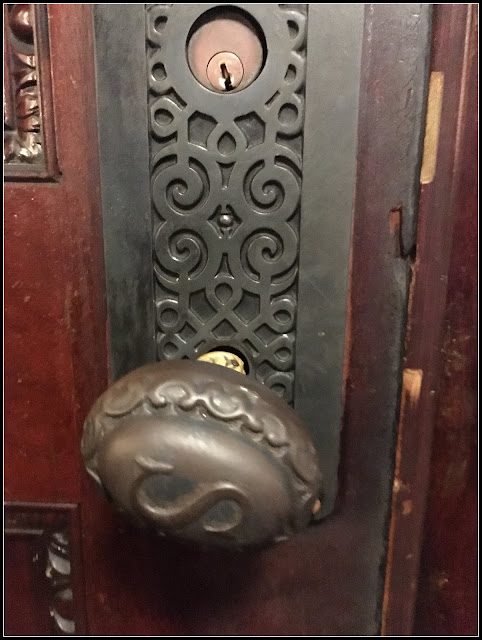 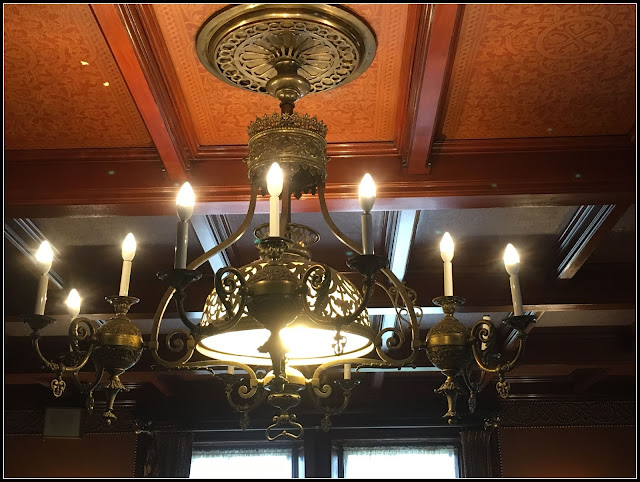 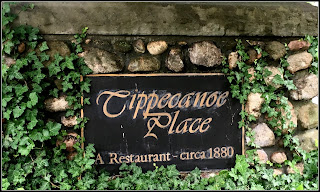 The house was listed for sale and remained vacant for seven years until bought by a local businessman in 1941 for $20,000. He gave it to the South Bend Board of Education for use as a school. In WW II, it was used by the Red Cross, then reverted back to a school, and later used by a local historical preservation group.


Since 1980, it's been an up-scale dining establishment and hosts local events and weddings.

After visiting the nearby Studebaker Factory Museum, we headed there for dinner. Our seating was in the mansion’s light and airy former drawing room, which includes one of the building’s 20 fireplaces. 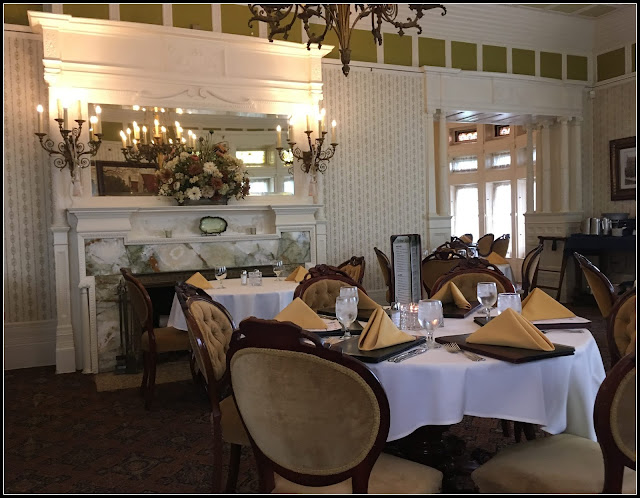 Even though we weren't able to view Tippecanoe in its former glory, it was nice to see that it is still being enjoyed, hopefully for years to come.
Posted by Beatrice P. Boyd at 7:00 AM

What interesting stone mansions. Can you imagine what it must have cost to keep them up to par. Thanks for all the pictures.

WOW, two great places. I cant imagine living in either one and trying to upkeep them. They are beautiful and fun to look at.

Its lovely to see these old mansions brought back to life and being used or opened as museums.

Incredibly opulent homes! The details inside are incredible and I love the stone workmanship. -Jenn

Both are quite impressive!

The stone work and wood work in these two grand mansions is quite fascinating!

Gorgeous house. Or should I say mansion. That would be my kind of stop 😀 hugs Erika

Thank you so much for sharing these homes and commenting on them. I love old house tours and you took me to two I probably never would have seen otherwise. Can't wait to see what else you come across on your trip.

Capshalom is without a doubt the most beautiful home I have ever seen. Tippecanoe is also lovely.

It was a very different style of life...very formal.

Sigh! If only.....!
Seriously, I love that staircase more than anything.