We're currently on a cross country road trip from New Hampshire to Oregon and posting about sites along the way. This post is about a stop in Reno, NV.

Reno, NV calls itself "The Biggest Little City in the World." As the second most populated city in the state outside of Las Vegas it's just as well known for gambling and casinos and as birthplace of Harrah's Entertainment.

That's a connection for our visit — not to gamble at a casino, but to see some of the fabulous auto collection of William Harrah (1911-1978) an American businessman and the founder of Harrah's Hotel and Casinos. Harrah assembled the largest and most historically significant automobile collection in the world. It numbered about 1,450 vehicles in its heyday.

The National Automobile Museum in downtown Reno displays historic automobiles from the late 19th century and from throughout the 20th. Most of the vehicles displayed (but not all) are from Harrah's former collection. and the museum is often called The Harrah Collection. 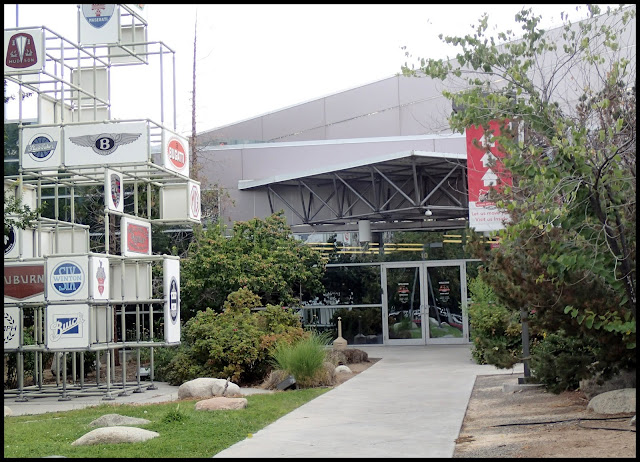 Most of Harrah's collection was stored in warehouses in Sparks, NV, and it was open to the public. When he died unexpectedly in 1978 after heart surgery, Holiday Inn purchased his hotel-casino business, then bought the auto collection in 1980. 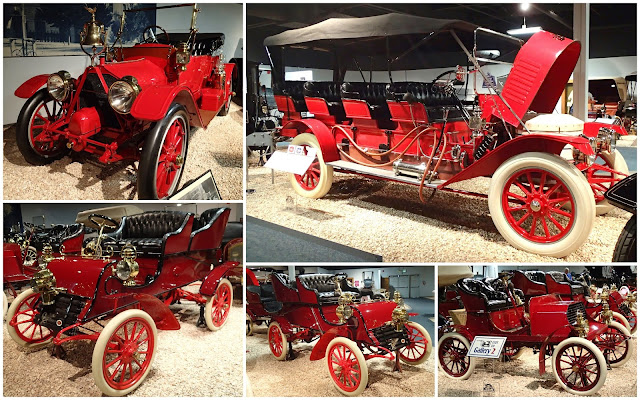 A year later in 1981, Holiday Inn announced it was selling the entire collection. This was not a popular announcement. The decision received great public opposition in NV. Then Nevada governor Robert List intervened and tried to delay the sale by working on a plan to have the state enact legislation to save the collection. A prominent entrepreneur, led a group that wanted to buy the collection. These efforts failed and a nonprofit group was formed to keep the cars in NV. That effort did succeeded and resulted in construction of the museum funded by donations, with help from the Reno's Redevelopment Agency, and an appropriation from the State of Nevada. 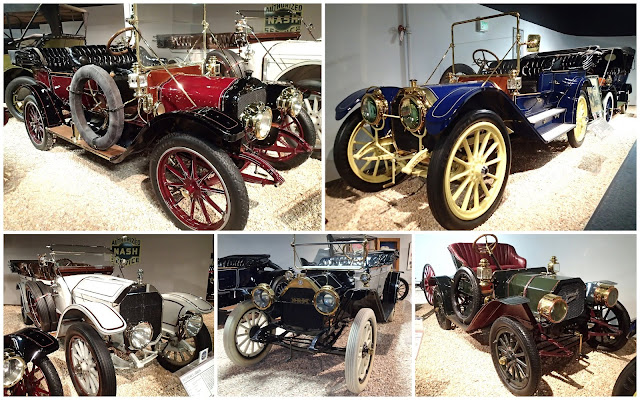 Holiday Inn ultimately donated 175 autos and the research library that Harrah had assembled on the cars to the nonprofit group. Back then, this was the largest corporate philanthropic gift in U.S. history. Another 60 vehicles were donated by private owners.
What about the rest of the collection? Holiday Inn sold those autos in three separate record auctions in 1984-1986 as well as through private sales. 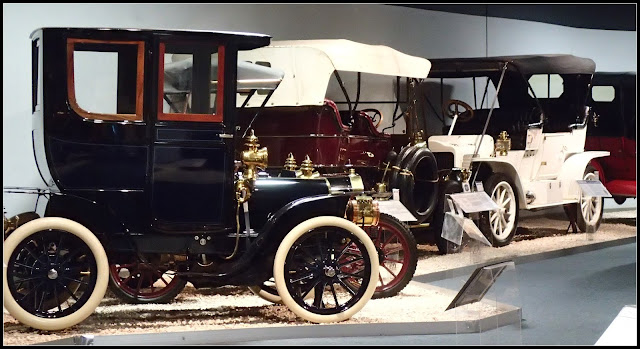 We only had a day in Reno and happily spent it at The National Automobile Museum. The $10 (senior) rate was weak worth the admission price. Not only did we see a fabulous auto collection, but watched an informative 25-minute film in a comfortable theater and had a free 90-minute guided tour.

The museum has 3 galleries all on one floor and is easy to navigate as the three galleries are clearly marked. There's a lot of information presented on each vehicle. Taking photos is permitted, but there's a lot of glare which bounces off the highly polished exteriors. 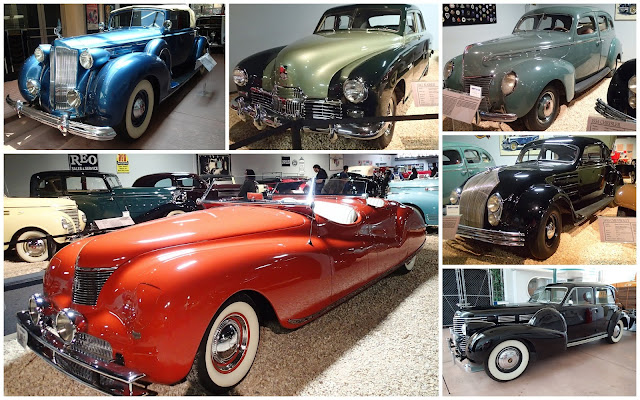 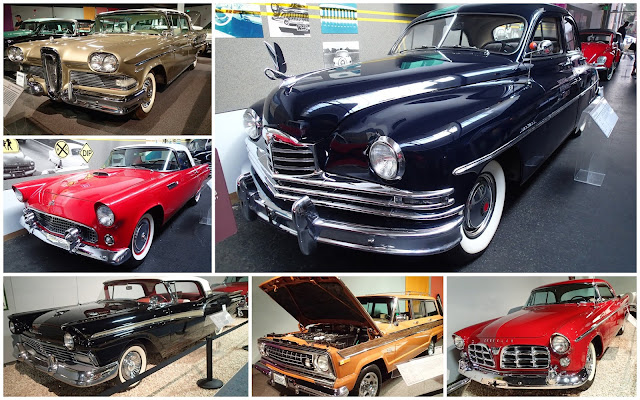 Near the first gallery, there's a workshop where cars are worked on for restoration. It’s a miniaturized version of the large workshop-machine shop that was in the Sparks warehouse(s). On the day we visited, a Mercury sedan featured in the 1955 James Dean film, Rebel Without a Cause, was in the shop. 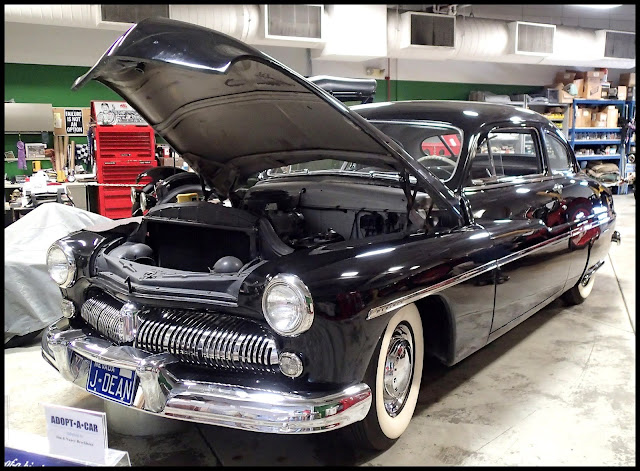 There's another movie connection. The 1912 Rambler featured in a dock scene in the 1997 blockbuster film, Titanic, is also on display. 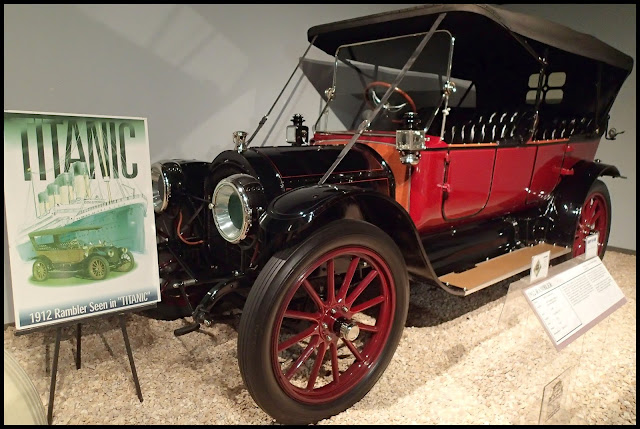 The museum has a small number of celebrity cars which don't dominate the collection. There's one of the first 1953 Corvettes given by GM to John Wayne (Wayne couldn't easily fit in the sports car and donated it to Harrah's collection.) Also, Frank Sinatra's 1961 Ghia, Elvis Presley's 1973 Cadillac Eldorado, and a Dusenberg re-creation owned by Sammy Davis, Jr. 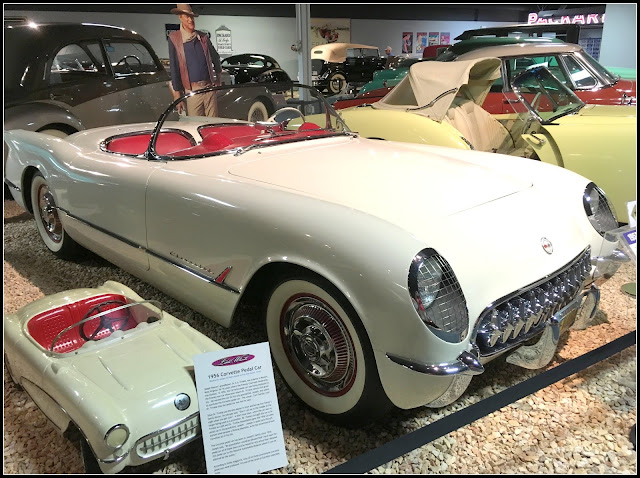 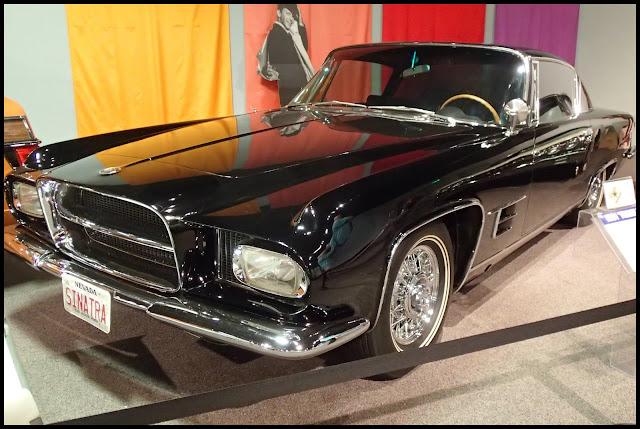 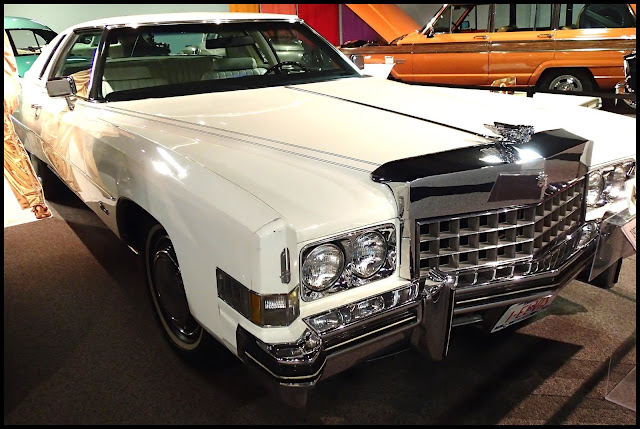 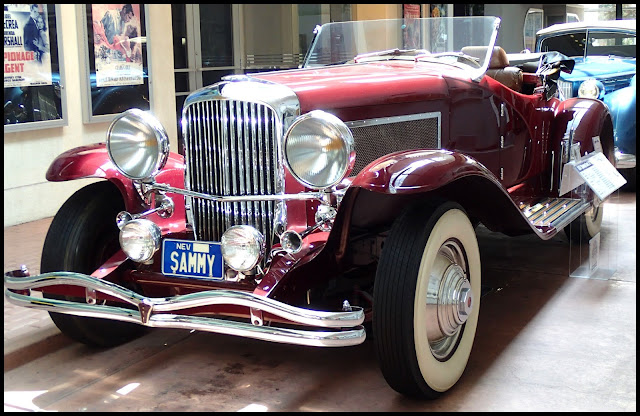 A highlighted display is the 1908 Thomas Flyer, which won the 1908 New York to Paris Automobile Race around the world race, traveling over 22,000 miles over land and sea. Thomas automobile sales increased for awhile, but the company ultimately failed and the car was sold in a 1913 bankruptcy. After years of neglect and in poor condition, Harrah purchased it in 1964. His restoration shop of over 40 expert craftsmen restored it to the same condition as after the race finish (it does look a bit worse from wear). 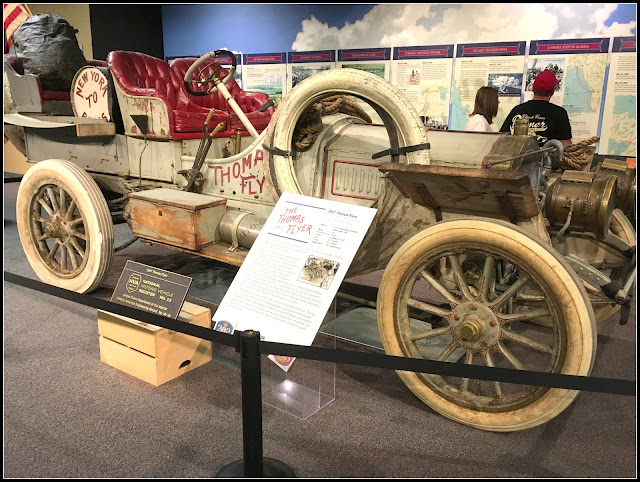 We found a connection to our home state of NJ in this yellow Mercer Type 35 Raceabout built from 1911-1914 by the Mercer Automobile Company in Trenton, NJ, which was funded by the Roebling and Krus engineering company, known for building the Brooklyn Bridge.The earliest Mercers were renowned for performance and reportedly could be taken from the showroom to the race track without modifications. 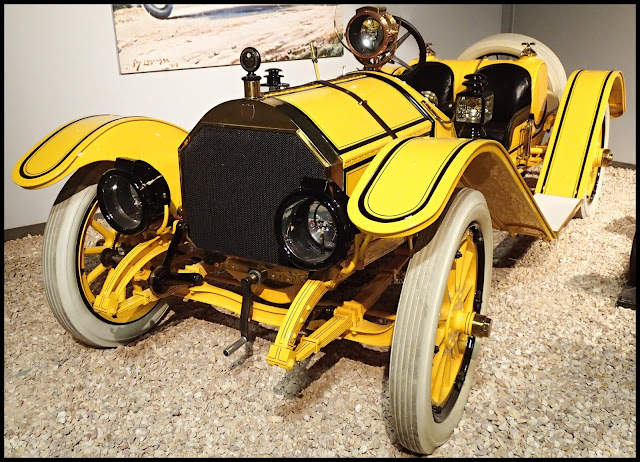 The 1930s street gallery recreates a city street, including a movie theater marquee that displays, Gone With The Wind. Parked at the curb, among other cars, are a blue 1938 Packard convertible, a blue 1930 Jordan 7-passenger touring car, and a vintage Lincoln. 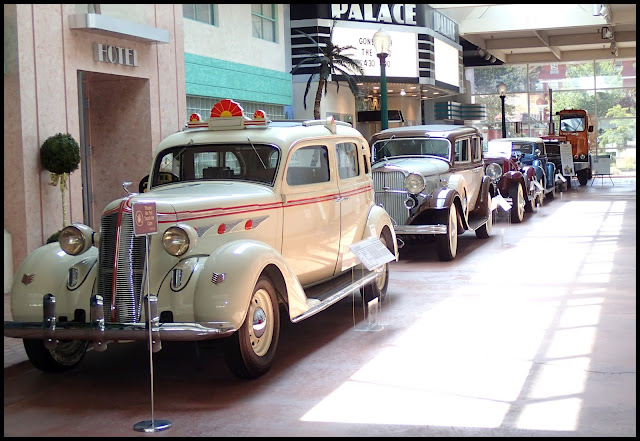 Another display featured vintage autos in an early "used" car lot, but the autos being offered for sale hardly very used. 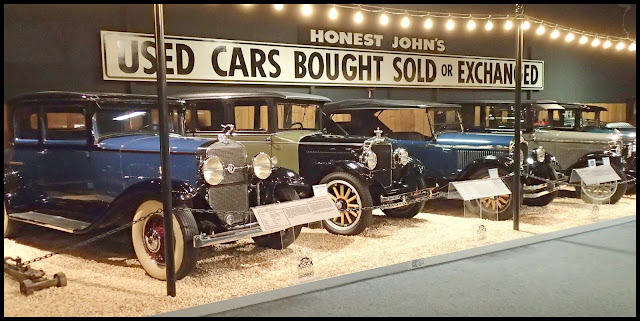 There's not just cars in the museum, but also displays of vintage gasoline pumps and logos of various car manufacturers. 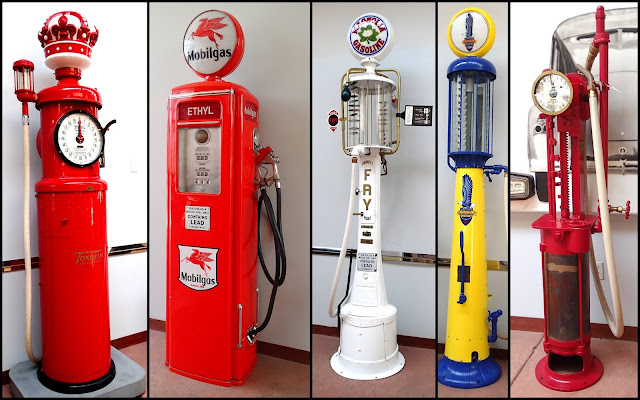 After the museum opened, it was reported to have set the standard for automobile museums around the world. It’s received numerous praise, including recognition as one of 10 best U.S. auto museums. Ironically, it’s within walking distance of a Harrah’s casino. 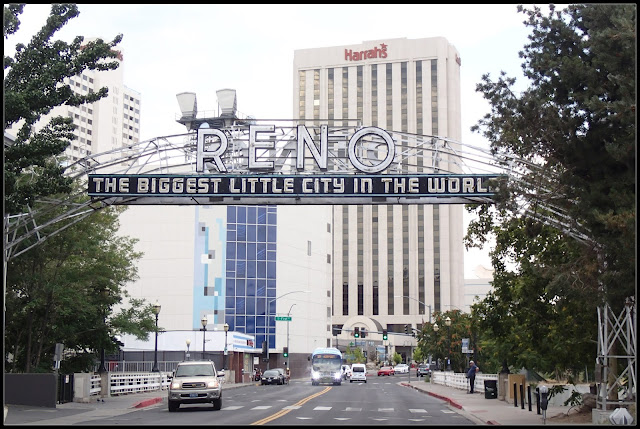 This is the second vintage automobile museum we've visited this month on our cross country trip. Previously we stopped at the Studebaker Automobile Museum in South Bend, IN. 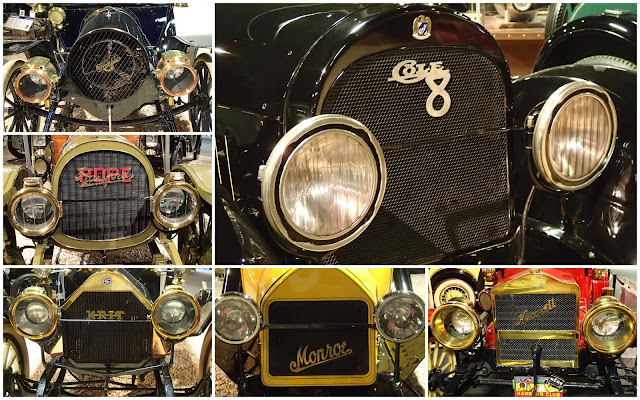 It would be unfair to compare both auto museums as they were evenly priced and offered a wealth of information. However, our preference was for the Reno, NV auto museum as it laid out on a single floor (compared to 3 floors at Studebaker) and while the collection seemed smaller, there was more diversity. (We never realized how many different automobile companies there were within U.S. states in years past.) However if you're ever in either IN or NV, you should visit them and make your own decision. 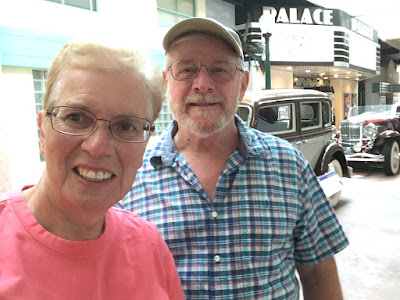 What a great place to visit and see all those awesome cars. I did not know they were in Reno, and like you, would rather see them, than a casino!

we both love old cars and most of these we can remember from our long lives. not all but most. I am glad they were able to save it and keep the museum for the public to see these, there is a vast number of people now who have never seen one of these beauty's except in a movie

I never knew this about William Harrah. How interesting! I love old cars and loved seeing all these pictures. Have fun on your trip. Can't wait to see where you go next.

How fun it is to look at all those vintage cars. I can't wait to see what's next.

Israelis will love this museum for two reasons: they love cars and they like the nama Harra (s--t). Crazy, isn't it?

Wow, what a great collection of vintage cars. I enjoyed reading your post all about them. Very interesting indeed!

This is a great collection of cars. Continue to enjoy your trip and post! Be safe!!

You pick up a lot of history by spending a day with these cars.

If only I could choose.... Actually I think I would go in for a sporty model, one that lets the hair fly in the wind as it whizzed along. Perfect dreams!