We're currently on a cross country road trip from New Hampshire to Oregon and posting about sites along the way. This post is about a stop in WI.


Did you know there’s an entire museum dedicated to one of the best-known condiments?
(A condiment is described as something that adds flavor to food and isn't eaten by itself.) 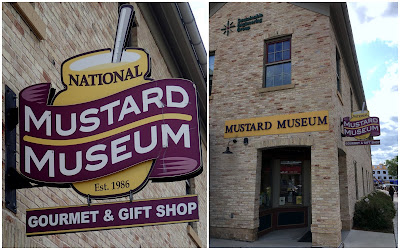 Don't worry about not knowing that. We didn't either until we traveled to Middleton, Wisconsin which was not far from where we were staying in the state.

We read about this place in a guide book and decided to seek out the National Mustard Museum which bills itself as home to the “World’s Largest Collection of Mustards and Mustard Memorabilia.”

Who would have known? 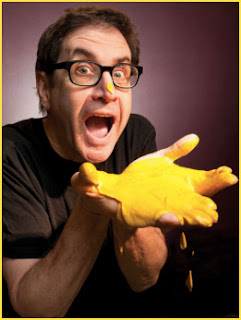 Not only that, but as improbable as it sounds we learned that there’s a New England connection. According to museum founder and curator Barry Levenson (at left), it's because his favorite baseball team, the Boston Red Sox, lost the world series in October 1986. Levenson claims that he was wandering in an all night-supermarket and passing the mustard section, heard: If you collect us, they will come.

Who could make this up? (Perhaps Levenson did embellish a bit lot.)

Supposedly, he bought a dozen jars of the condiment to start the largest collection of prepared mustards. Meanwhile, he continued his day job as Wisconsin’s attorney general. Five years later, In 1991, he resigned to devote full-time to his growing collection.

We’re not sure if he has the largest collection, as we've never seen others. But there's a lot of mustards in this place — more than 6,000 from all 50 states and over 70 countries and the collection continues according to Levenson who's at the museum most days. 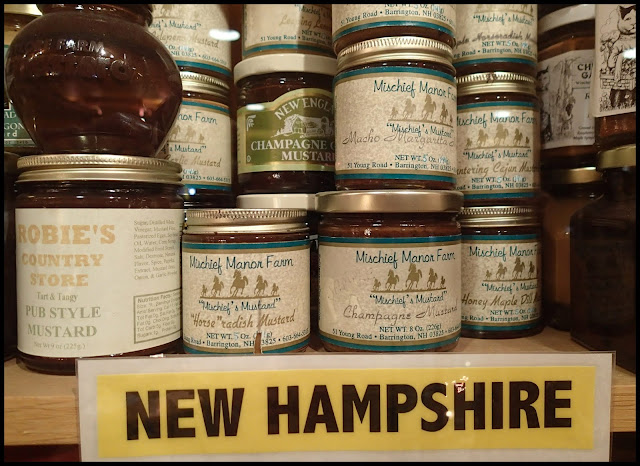 There’s also a lot of mustard-related memorabilia, such as vintage mustard cans and magazine advertisements that feature mustard.

The former "Mustard Museum" opened to the public in Mt Horeb, WI, in April 1992 and then again when the collection outgrew that space. It's been in its present location moved to its current Middleton location in 1992 and was renamed the “National Mustard Museum.” It's open daily, 7 days a week with the exception of Christmas, New Year's, Easter, Thanksgiving). There's also a mustard festival which is usually in August.

According to several local guides, this unusual museum has grown to become one of Wisconsin’s most popular museums. Best of all it’s FREE and no admission is charged, although there’s a suggested donation of $2.

Not sure if you like a displayed mustard, there's free mustard sampling. Purchases are also encouraged as the museum has a large variety of mustards for sale. Yes, we bought several varieties.

According to several sources, this museum, which is open daily, is one of the state’s most popular tourist stops. There was a large group there on the day we visited and Levenson himself talked about his mustard passion. 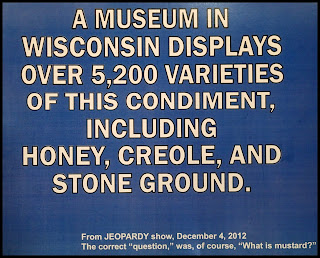 The National Mustard Museum has been featured on The Oprah Winfrey Show, The Food Network, HGTV’s The Good Life, and in the pages of dozens of national magazines & newspapers. And, it was the subject of a Jeopardy question in 2012.


We learned that the phrase "cutting the mustard" originates from mustard’s harvesting process. Before the invention of modern machinery, field workers had to harvest mustard seeds by hand. The woody 1-inch stems were cut with a hand sickle 14 days before the plant ripened. If harvesters delayed too long, the pods would split and scatter the seeds over the fields. It was a very laborious process.

Incidentally mustard is not the favorite condiment in the U.S. That honor formerly belonged to ketchup (or catsup). Recent surveys now proclaim that mayonnaise is No. 1. The ranking for the most commonly used condiments in the world: ketchup, mayonnaise and then mustard.

Condiment favorites are also regional. In New England, maple syrup is one of the most popular condiments for just about anything. In the Deep South, it's barbecue sauce. In New Orleans, it's Tabasco pepper vinegar or hot sauce.

Finally, the mustard museum is not the only condiment-focused museum. Ketchup is featured in an exhibit at the Senator John Heinz History Center in Pittsburgh, PA. Mayonnaise is so popular in Japan where it's put on many foods that there's a mayonnaise museum in Tokyo. 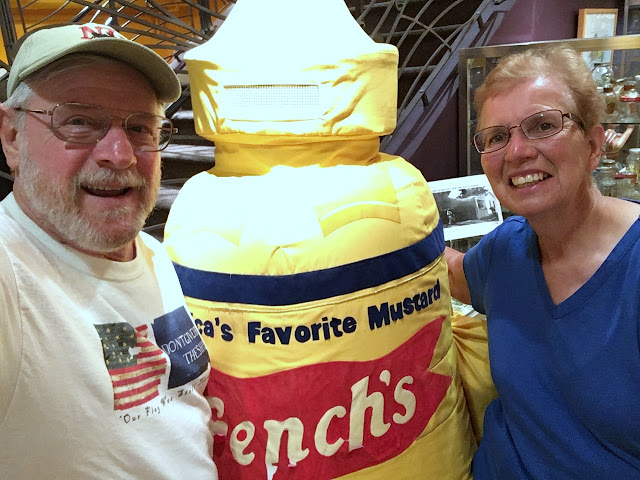 We're not sure that we'll get to the mayo museum, but the ketchup one may be on a future road trip. 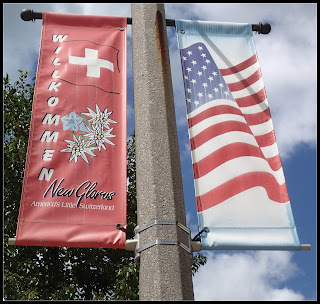 Now about the Swiss reference in this post title.

A short drive from Middleton we came across the village of New Glarus, WI, which is known as “America’s Little Switzerland.” Swiss flags fly next to the American flag at many businesses and homes.

The village, and the town that surrounds it, were named after the canton of Glarus in eastern Switzerland. The community was founded in 1845 by immigrants who left the Canton of Glarus in Switzerland during an economic crisis. it was incorporated in 1901.  Since then, succeeding generations have kept up the community's Swiss-German language, folk traditions, and music.

It's now a popular destination and the day we visited parking spaces were at a premium. It’s maintained much of its Swiss heritage and old world traditions. 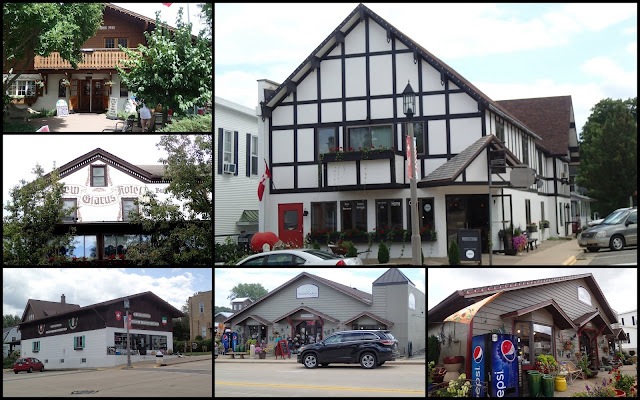 Throughout the village, there are buildings with architecture resembling Swiss-style chalets. There’s a butcher shop, restaurants, hotel and Swiss bakery and shops selling Swiss-themed items. Streets have names like Bahnhoff Strasse and Rüti Strasse. 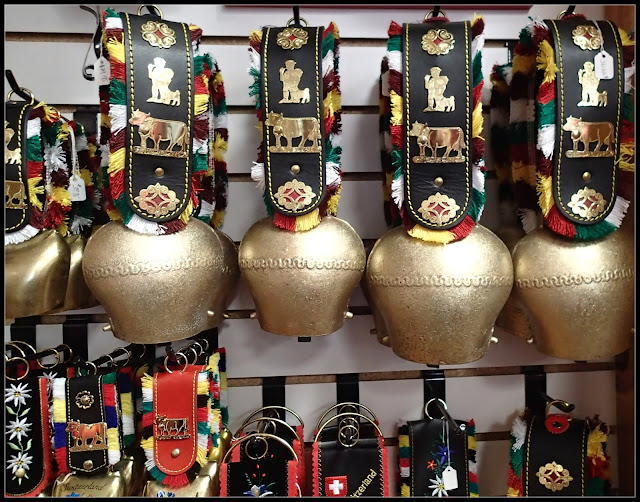 New Glarus is where Swiss cheese got a start in the U.S. In the 1860s when the wheat market collapsed, the dairy farmers hired a cheesemaker and formed a cooperative where they could deliver their milk. Cheese was a durable product that could be shipped East.

Today, Green County, WI, location of New Glarus, is the "Swiss Cheese Capital of America." Swiss cheese factories are on the outskirts of the town and scattered throughout the county.
Posted by Beatrice P. Boyd at 8:00 AM

we both love mustard and have never heard of a mustard museum, now we have seen one.. beautiful architecture also...

Who would have thought?? I just love following you guys! You have an amazing life!

New Glarus swiss settlement sounds interesting. Is it possible in our times to maintain a sort of swiss oasis in the middle of the american continent characterized by high diversity?!

that was an amazing place to visit!! I love to see this ,,I hope you get to the ketchup one,,

You are finding some amazing places. I'm glad you decided to take us with you.

A mustard museum--now that's something I never would have thought of!

Good to know that someone mustered up enough dough for that mustard museum. Hot dog!☺ Stupid tablet keeps changing this to joy dog!!!! Funny!

I wouldn't have thought of that for a museum either!

there is Reys mustard in Maine that we use to go and buy gallon jugs of when my grandmother was making mustard pickles or other things.
But looks like a fun place to visit
Cathy

Wow, that's a lot of mustard. Looks like fun to visit!

Wow, that's a lot of mustard. Thanks for sharing this gem, I'll be sure to seek it out if I am ever in the region! New Glarus looks very Swiss indeed (I am Swiss). The bells remind me of a childhood story book where the children parade their cowbells around a village.

A mustard museum ... wow! I would be in my element in that store. I also like tabasco sauce!

What a fun visit. You are certainly seeing some sights.

I remember that Red Sox loss. Wow. That’s quite the story. For starting a mustard museum which looks like fun. And a Swiss village. There is so much out there that I didn’t know existed. Safe travels.