We're currently on a cross country road trip from New Hampshire to Oregon and posting about sites along the way. This post details one of our first OR adventures. 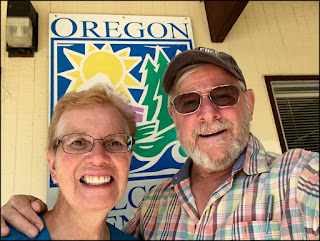 UPDATE — We arrived in Oregon a short time ago (blog posts are not keeping up with our travels in "real-time"). This post details one of our first OR adventures.

We took this "selfie" at the Oregon Welcome Center shortly after we arrived.The friends we came to visit, suggested a scenic drive which was en route to Eugene.The McKenzie Highway (Oregon Route 242) is located between Sisters and Belknap Springs, OR. It loops through the Willamette National Forest and the Cascade Mountain Range. At 5,325 feet above sea level, it's the quickest way to cross the Cascades. Lucky we drove this scenic route now. The narrow road is not plowed or sanded and closed from November to July. 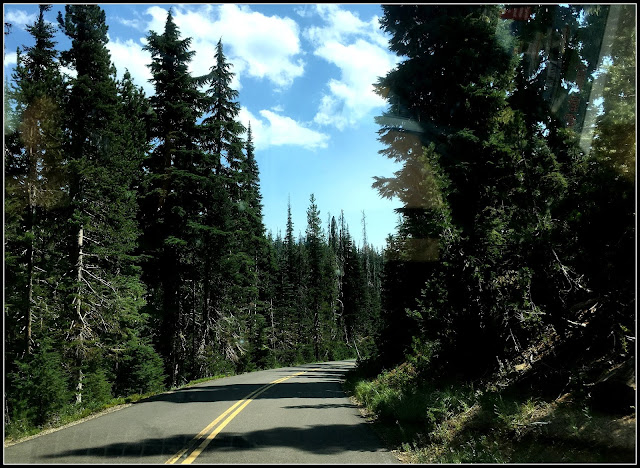 The McKenzie Highway has evolved from a trail, to an 1860 wagon road, to an early automobile route, and to the present highway. 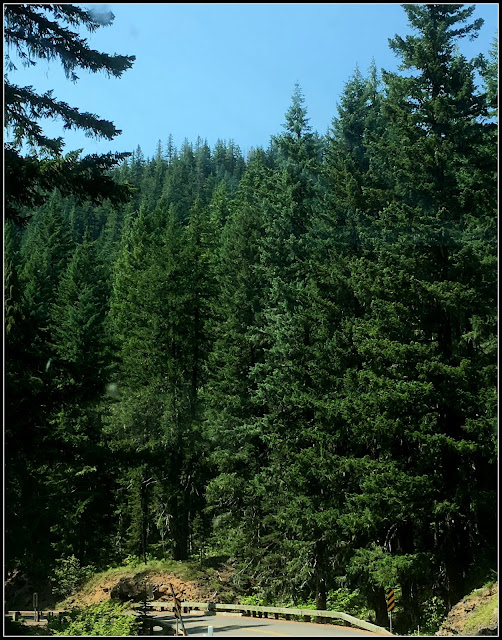 Leading up to the summit (elevation 5335 feet), the pass cuts through a 65-square-mile lava flow. Yes, there were volcanoes in Oregon too many (many) years ago. 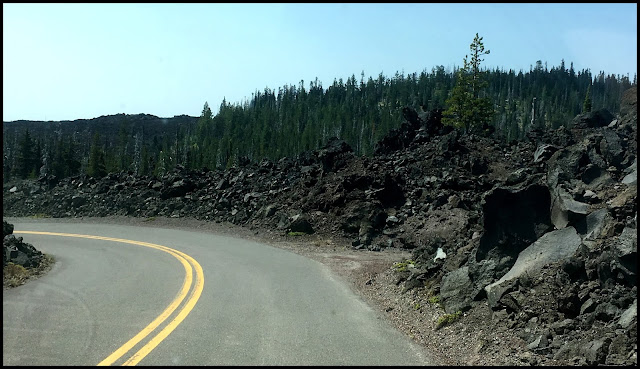 Located about halfway along the route and the summit is the Dee Wright Observatory in the Willamette National Forest at the summit. This castle-like structure was built from lava rock found on-site in the middle of a large lava flow. 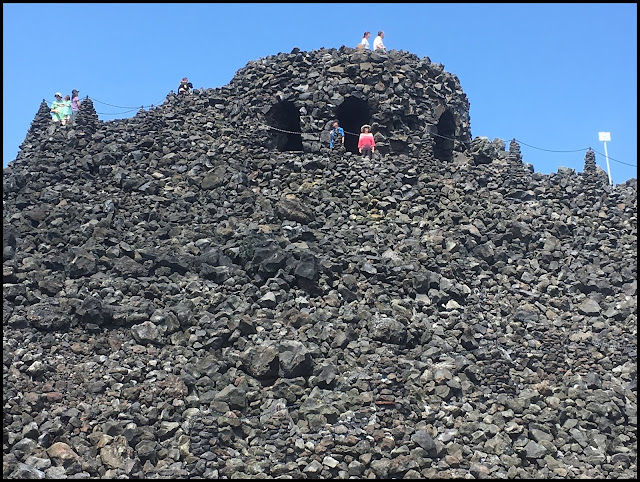 The observatory was built in 1935 by the Civilian Conservation Corps (CCC) and named in memory of Dee Wright, the crew’s foreman who had died the previous year after 24 years as a Forest Service employee. Sadly, he never saw its completion. 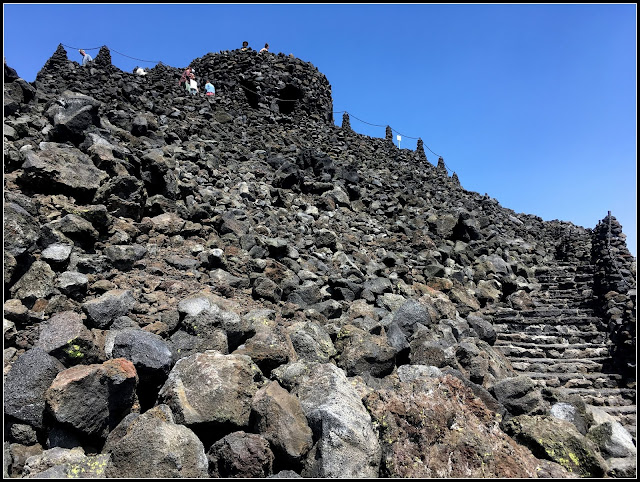 Access to the top is by a series of stone steps in front or a narrow paved path in the back. 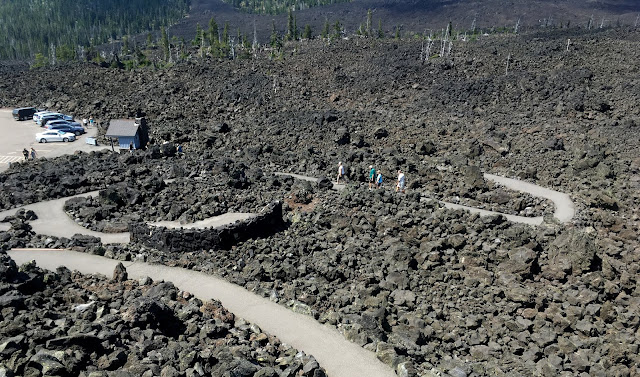 After seeing some folks struggle with climbing the steps, I opted to walk the path. Along the way, panels on the walls provide information on early travelers and area geology. 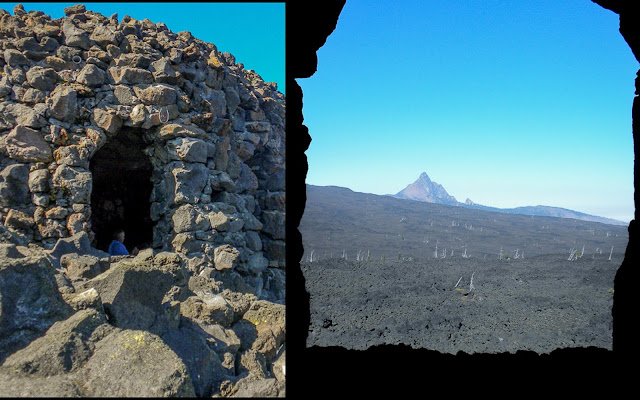 Once the climb is done (whew) and you enter the dome, lava viewing windows are cut out to frame the surrounding mountain peaks.

But, wait, the climb isn't yet done as there's still the rooftop to access where this bronze peak finder has the names and elevations of surrounding buttes and mountain peaks. It was so worth top climb.

Here's where we saw panoramic views of the Cascade Mountain Range, including Mt Hood, Mt Washington, Mt Jefferson, the 3 Sisters, and Mt Bachelor. Those are glaciers on the mountain tops. 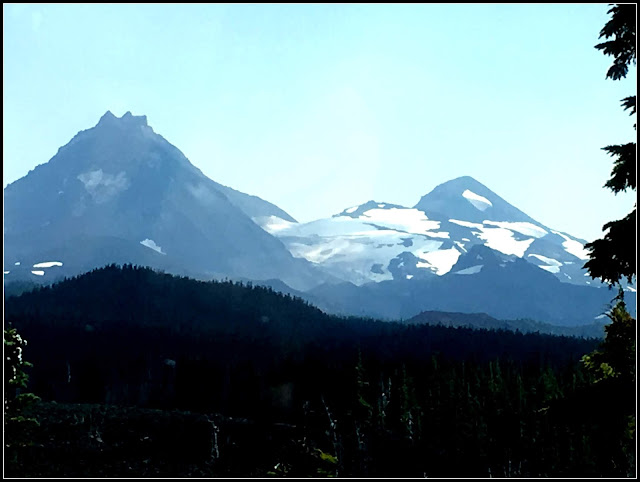 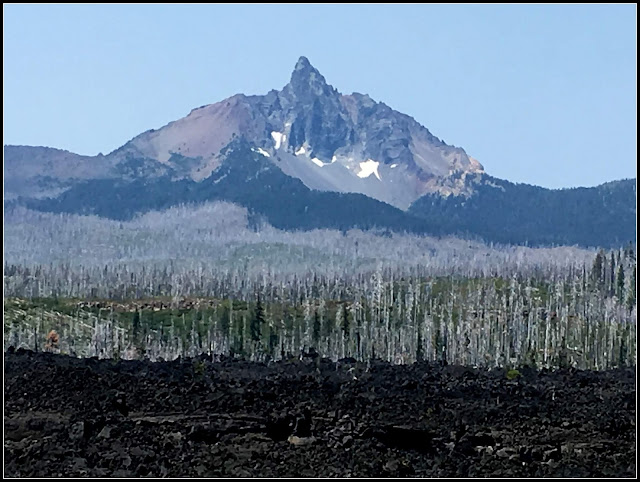 Not surprisingly since the 65 square miles of black lava rock looks like a moonscape, NASA conducted drills with astronauts as they prepared for moon travel in 1964. 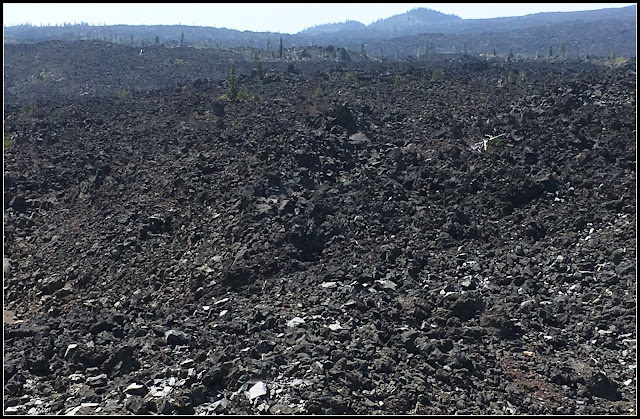 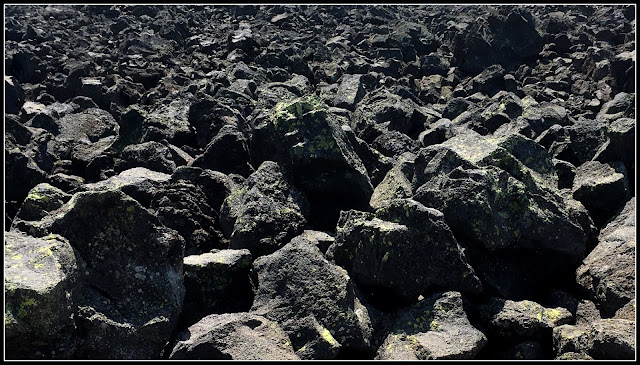 The 82-mile long McKenzie Highway is a National Scenic Byway. It has the highest concentration of snowcapped volcanoes and associated glaciers in the lower 48 states. 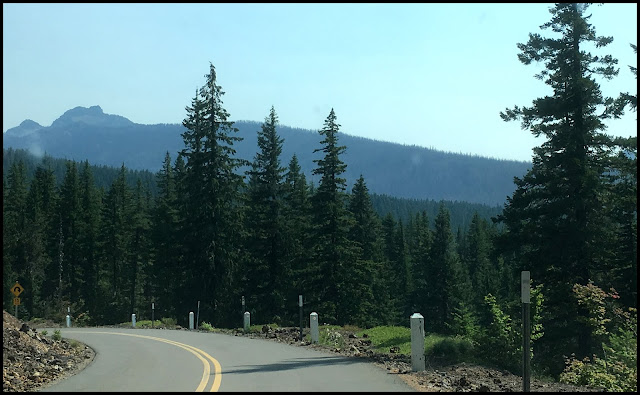 The route became a state highway in 1917 and was added to the National Register of Historic Places in 2011. 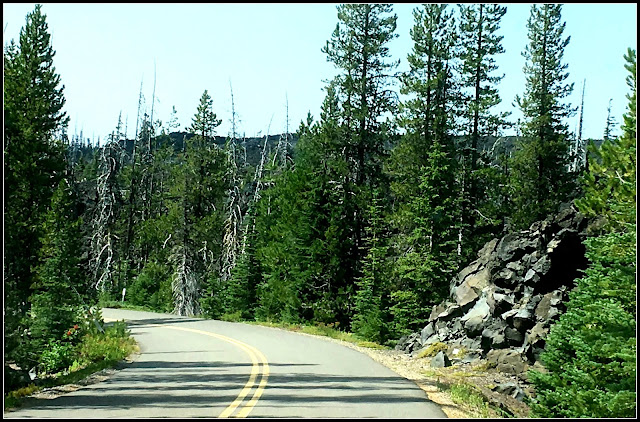 This was one of the most amazing roads we've traveled on during this cross country road trip to date. The landscape included lush forests, stark lava fields, and mountain peaks, all in a single drive, even if it was a long and curving one.

(We met up with our Oregon friends a day or so after this drive and will have more posts on sights there and then on the route back to NH. Thanks, again for traveling along and  especially for all your comments.)
Posted by Beatrice P. Boyd at 7:00 AM

Loved these pictures........how fascinating. I have been to Oregon and love that State. You have had a wonderful trip and I have truly enjoyed going along....

I have seen some lava flows in Arizona, and while they weren't pretty they were great to see. You had some nice landscapes on the way too.

Fascinating to see this area and congratulations for walking up to the top. I have been enjoying following along. Makes me want to get in the car and go somewhere :) Enjoy being with your friends. Thanks for sharing it all and continued happy traveling!

I think this might be the MOST amazing of all the amazing sights you have visited. I have never seen lava and would not have known what this is. did I say amazing???? from those TALL trees to the majestic mountains in all directions to that mountain of lava. all amazing

Spectacular place and sights! Volcanoes (and their lava) are one of the most interesting nature elements.I'm afraid we shall be hearing more of their activity in the upcoming years.

That’s one of the things I’m looking forward to - meeting some friends in Oregon! One lives in Hillsboro - a suburb of Portland and one lives in Rockaway Beach. I’m enjoying your trip so much! Going back to see the posts I missed before ‘meeting’ y’all!

I was only a child when we were in Oregon. Because we were moving to a new home we didn't get much of a chance for sightseeing. What I remember seeing was beautiful and so fresh and clean.

That lava landscape is incredible!

This is so fascinating! I never knew any of this information. Thanks so much for all your posts. I am learning a lot.

Cascades are an awesome range of mountains.

Our country is truly amazing. Neat drive, neat pictures! I have a nephew in Portland. He posts pictures of all the hikes and beautiful places they visit. Beautiful state!

I've been to a few places in Oregon but never on this highway. It looks like a cool drive. Love all the lava from those volcanoes. Hugs-Erika

I am really enjoying these visits. I don’t think I have ever been in Oregon. I have visited Washington stat when my brother was stationed there in the service. That was over 50 years ago. I enjoy seeing all of the photos.

Wow, that's a long way up. I'm not sure I would be able to navigate the stairs or the path. My knees don't hold up as well as they used to. I would probably just enjoy the view from the bottom! Beautiful part of the country. Lovely photos!

I don't think I have ever seen anything like it in my life. The climb must have been exhausting but so worth it for the fantastic views. Amazing!