A Capitol and a Temple

We're currently on a cross country road trip from New Hampshire to Oregon and posting about sites along the way. This post is about a stop in Madison, WI.

We've found that one of the best places to visit in any state is the capitol building — it's usually the most elegant city structure, it's always centrally located and usually it's FREE to tour. 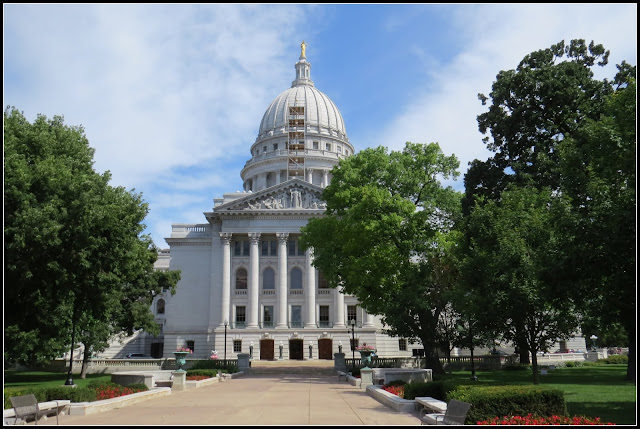 That's why on a stop in Madison, Wisconsin, we visited the 101-year old State Capitol. Wisconsin is the 30th state and was granted statehood in 1848. The building sits on a 13-acre square in the center of downtown Madison on an isthmus formed by Lake Mendota to the north and Lake Monona to the south. And that also makes it unique. 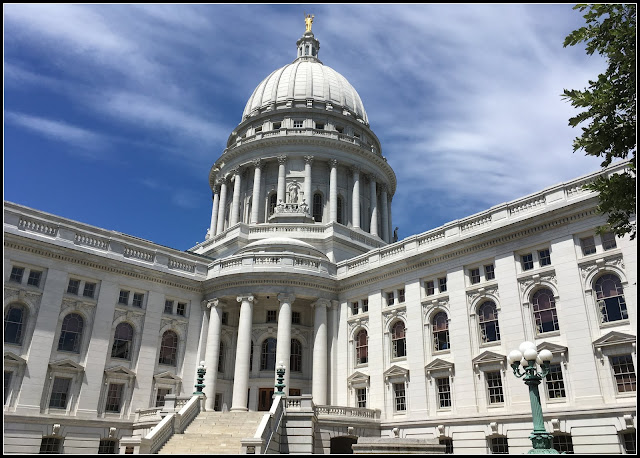 Construction of the third and present capitol began in late 1906 and was completed in 1917. It can truly be said that the capitol was built by state residents as each was taxed 25 cents each to help fund construction costs which totaled $7.25 million. The capitol houses both chambers of the Wisconsin legislature along with the Wisconsin Supreme Court and the Office of the Governor. 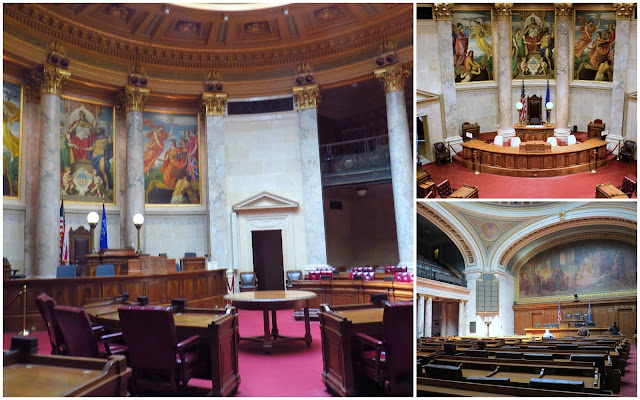 Its dome is unique in that it’s the only and the largest granite capitol dome in the country. And the exterior stone is Bethel white granite from Vermont (yeah for new England). Reaching a height of over 265 feet, the dome is topped by a gilded bronze status named “Wisconsin” created by Daniel Chester French in 1920. (French also sculpted the massive seated Abraham Lincoln statue in Washington, DC.) 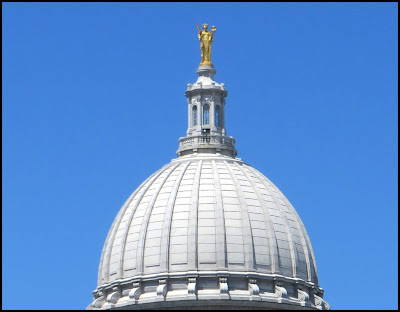 The statue is is made of hollow bronze covered with gold leaf. "Wisconsin" is quite a substantial figure standing 15-1/2 feet tall and weighing three tons and costing $20,325. It’s gilded with a coat of lead zinc oxide and oil paint, followed by 22-carat gold leaf. 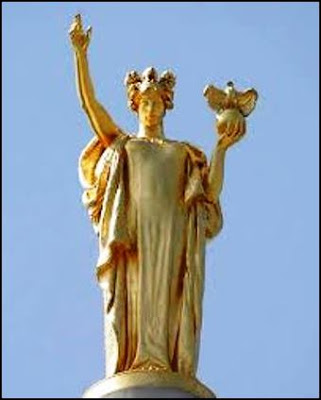 Wisconsin's left hand holds a globe with an eagle atop it, the right arm points outward to symbolize the state motto, “Forward". It wears a helmet with a badger on top, a reference to the state animal and the state’s nickname as “the badger state.” 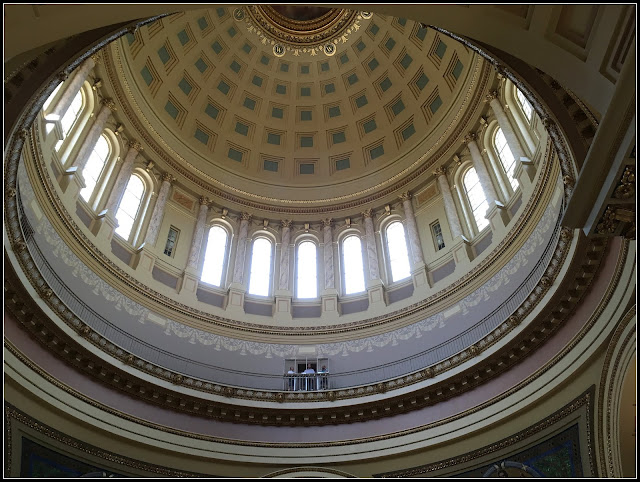 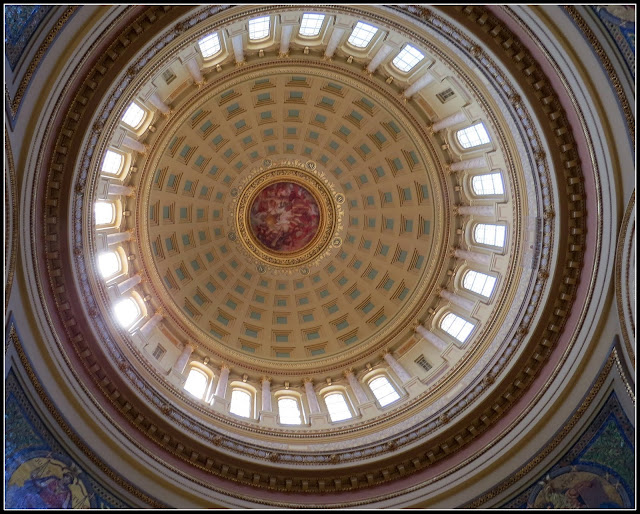 The painting is 34 feet around and shows a central figure draped in an American flag and holding a scepter of wheat surrounded by companions holding other state products: lead, copper, tobacco, fruit and a freshwater pearl. (Blashfield is best known for painting the murals on the dome of the Library of Congress in Washington, DC.) 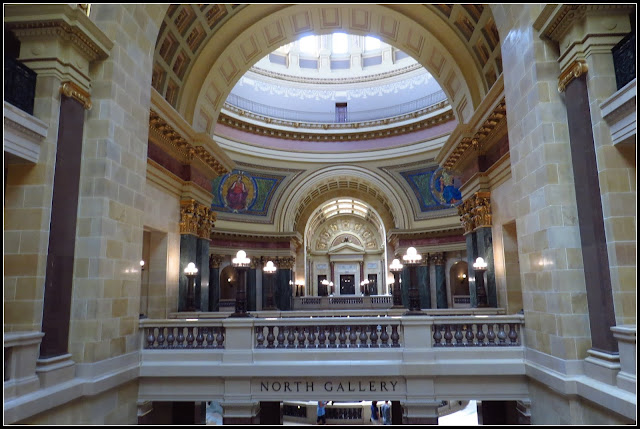 Forty-three types of stone gathered from eight states from Wisconsin to Vermont and Italy to Algeria are incorporated into the capitol's 700 rooms. 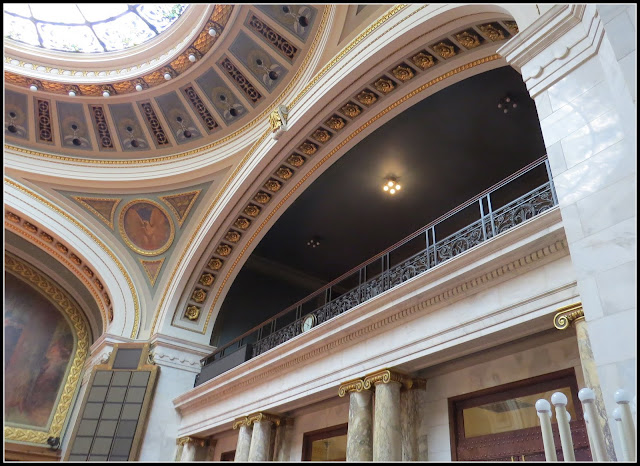 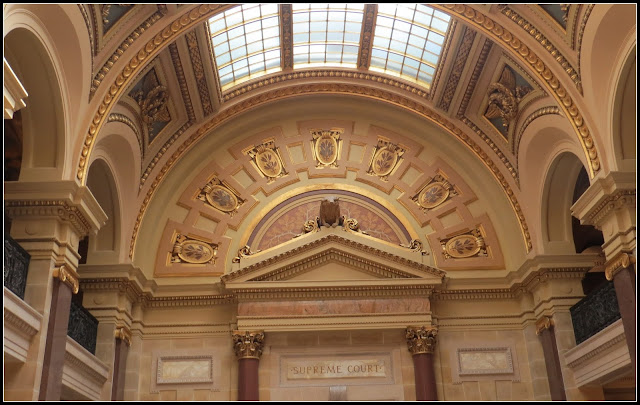 Wisconsin granite is also found on hallways on the ground, first, and second floors. Marble from France, Italy, Greece, Algeria and Germany, and from Norway are also represented.

The observation deck on the capital's sixth floor is open to the public from Memorial Day through the first week of November for weather reasons. To get there we took an elevator, then climbed a small circular staircase. These sculptures were some of those visible from the deck. 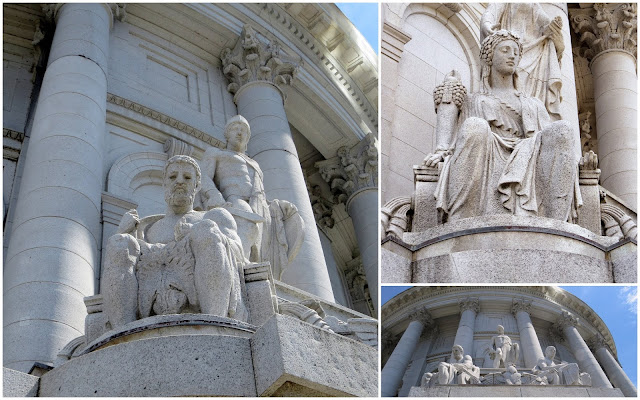 The Wisconsin State Capitol is the tallest building in Madison and it will remain that way by legislation. A 1990 state law prevents any building within one mile of the capitol from being taller than the base of the columns surrounding and supporting its dome (187 feet). 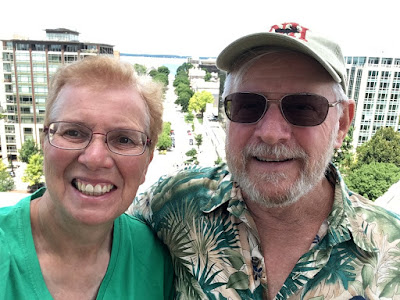 The capitol building was designated a National Historic Landmark in 2001 and is a must-see sight in Wisconsin. The guided tour is also free.

We found another Madison sight that was not only free as well, but also unusual. 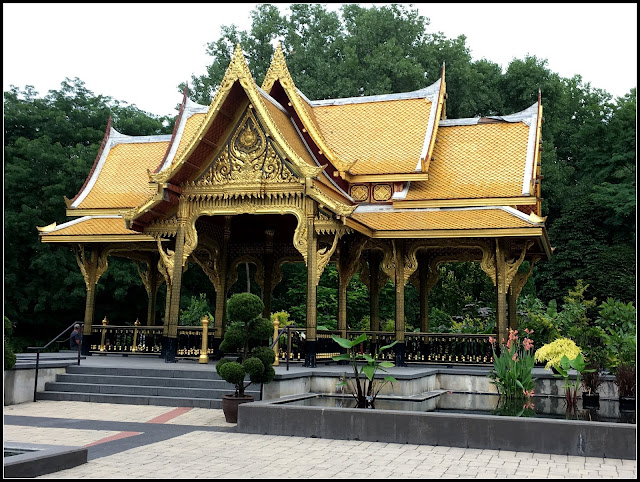 How would expect to find a Thai temple in a botanical garden within a U.S. midwestern city. But that’s just what we saw on our visit to the Olbrich Botanical Gardens in Madison, WI. We strolled through 16 acres of outdoor gardens featuring waterfalls and water gardens. It’s a self-guided walking tour and FREE although donations are welcomed. 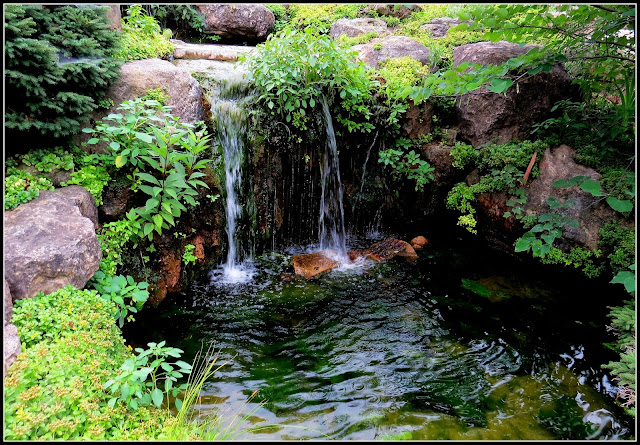 Olbrich Botanical Gardens is named for its founder, Michael Olbrich. The gardens were established in 1952 and are owned and operated jointly by the City of Madison Parks and the non-profit Olbrich Botanical Society. 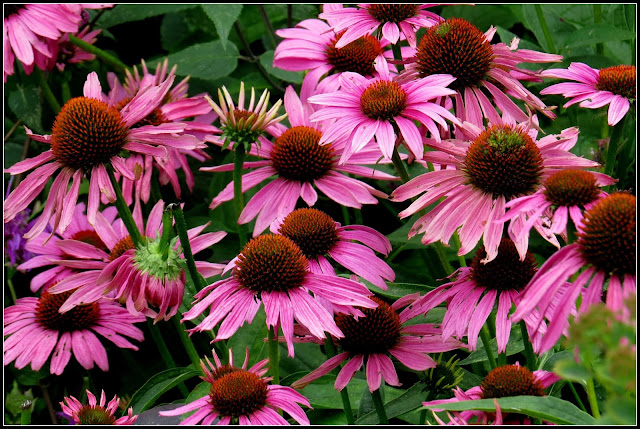 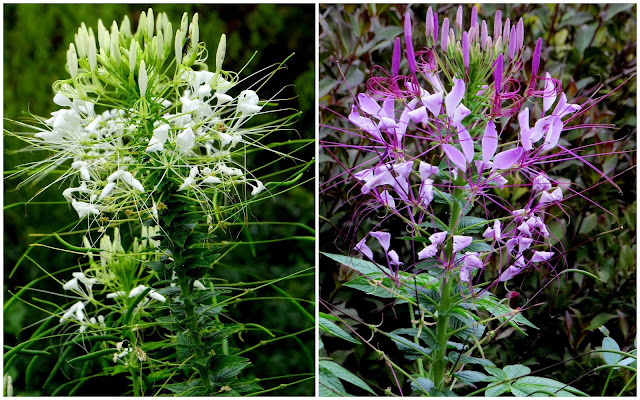 The outdoor gardens are open daily. It’s a self-guided walking tour and while no admission fee is charged, donations are welcomed. 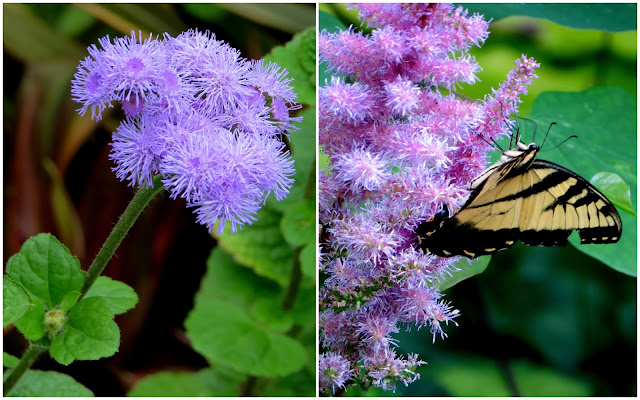 Olbrich's Thai Pavilion and Garden opened in 2002 and is one of only four sala outside of Thailand and one of two in the U.S. (the other is  in Hawaii). A pavilion, or sala, is common in Thailand and used as a shelter from rain and heat. 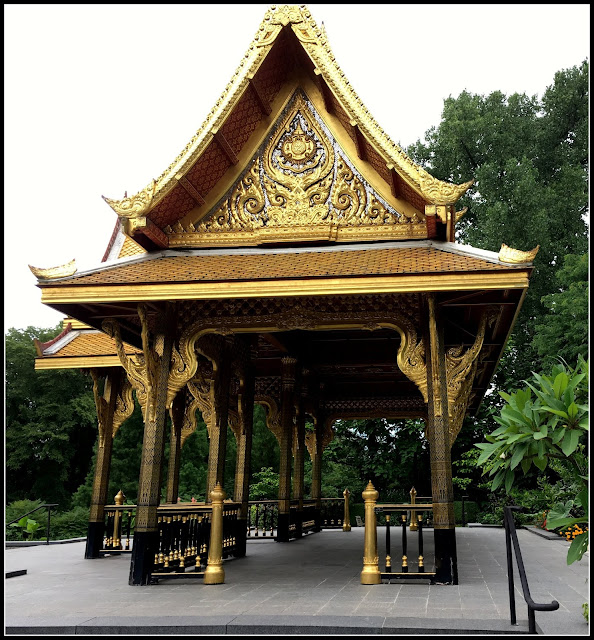 The Olbrich pavilion is more ornate than most roadside salas and represents those found at a temple or on a palace grounds; however, it’s not a religious structure. It was a gift to the University of Wisconsin, Madison from the Thai Chapter of the Wisconsin Alumni Association and the government of Thailand through its king. (The university has one of the largest Thai student populations of any U.S. college or university.) 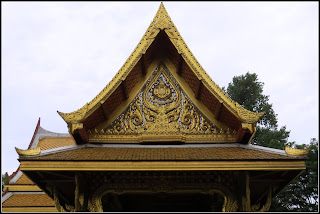 The pavilion was built in Thailand, disassembled and packed in shipping crates. Tit had quite a trip and traveled seven weeks by sea, by rail to Chicago, and by truck to Madison. Nine Thai artisans, who built it in Thailand, also came to Madison to reassemble it in three weeks.

Maybe like us you're wondering how the pavilion can prevail in a winter-prone state like Wisconsin. We learned that it can withstand the elements because its constructed of plantation grown teak and weather-resistant ceramic roof tiles. Visitors are cautioned not to touch the temple as its gold leaf is delicate and can't withstand oils of the human hand. 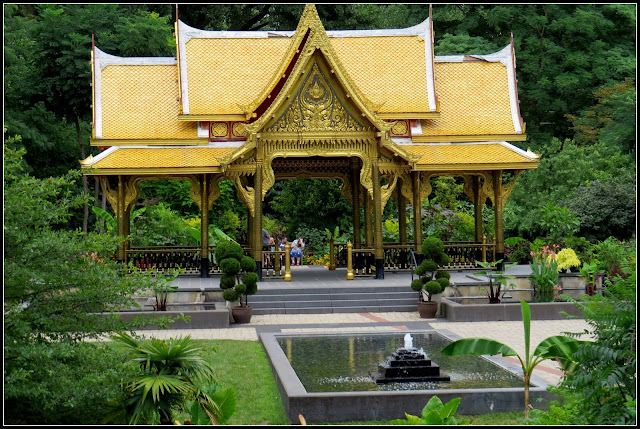 The Thai Garden has a shallow reflecting pool near the pavilion which was restful to stop, there's no seating inside the pavilion. The garden also has several small examples of Thai sculpture. 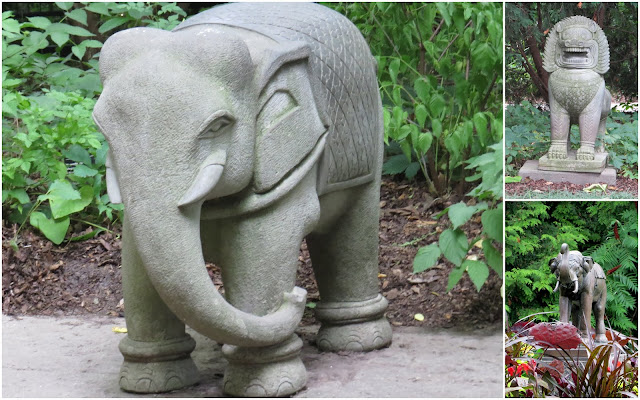 We had an enjoyable outing on our one-day (and free) visit to Madison.
Posted by Beatrice P. Boyd at 7:00 AM

Thoroughly enjoyed this post, the Capital Building and the Thai Pavilion and its history. You are seeing some wonderful sights on your trip. Continued happy traveling :)

Both the capitol bldg. and the gardens are beautiful. The Thai part is interesting as well. We visited Madison many years ago but it was to a basketball tournament, so we didnt tour. I see now what we missed.

No wonder it took 11 yeas to build the Capitol building as it is very ornate and is actually a piece of art.

Both are beautiful structures!

I attended meetings regularly in the capitol when we lived in WI. It is indeed a lovely structure. Except down in the lower levels where it is colorless and cold. I never visited the Thai garden. Too bad I missed it. I'm still loving your trip. You are visiting many of the places I would visit on such a trip.

The Capitol Building is lovely. I enjoyed going through it with you. However the Thai garden is stupendous.

Both beautiful in their own way. A wonderful tour that you took us on and I love Free.

Wow what lovely gardens and buildings. You are seeing a lot on this trip.

Wow. You are having a grand adventure. I am enjoying the trip from my computer for sure. Safe travels. Hugs Erika

Both of these are beautiful spots to visit although vastly different. You are finding lots of great places to see along your route.