We're currently on a cross country road trip from New Hampshire to Oregon and posting about sites along the way. This post is about a stop in Boise, ID. 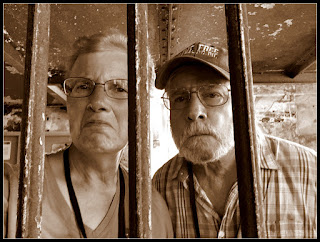 Yes, it's true, we went to jail (actually prison) on a stop in Boise, ID. But, unlike the many prisoners who were incarcerated there, we escaped and to tell the tale.

The Old Idaho Penitentiary is operated by the Idaho State Historical Society and is open year round to visitors. In 1973, it was placed on the National Register of Historic Places for its significance as a Territorial Prison. The site has 30 historic buildings and exhibits, including cell blocks, death row, solitary confinement, and the gallows. 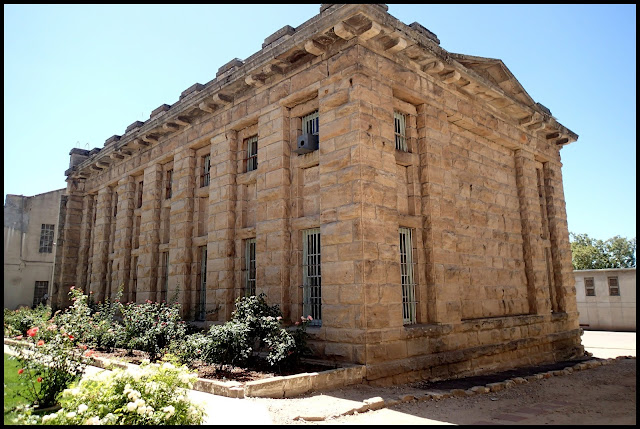 In the late 19th century, the territory of Idaho remained frontier land and, like most territories, many settlements were lawless. Idaho needed a prison to be considered for statehood in the Union. The territory was seven years old when the prison was built, 20 years before Idaho was admitted to statehood. 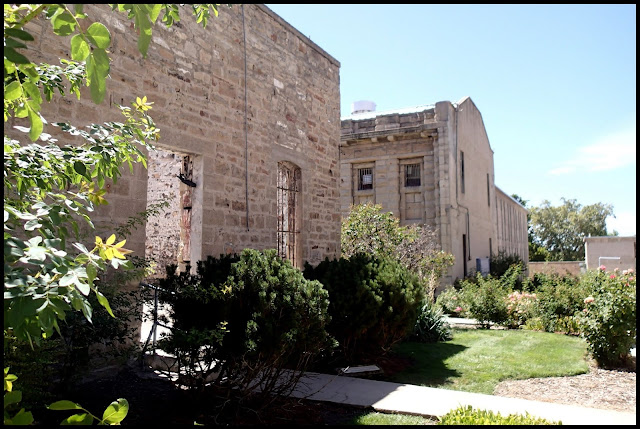 Popular sentiment at the time was that prisoners scattered in county jails across the territory should be housed in a single facility and the Idaho Territorial Prison was built in 1870 as a one-cell building. In 1872, the first 11 prisoners arrived from the Boise County Jail. Eventually, the prison expanded to a 4-1/2 acre complex of 15 buildings, surrounded by a 17-foot-high sandstone wall.

Thie warden's house (below) was built entirely by prisoners and had 8 rooms and a basement.Total cost to construct this sandstone house in 1905 was $3,100. 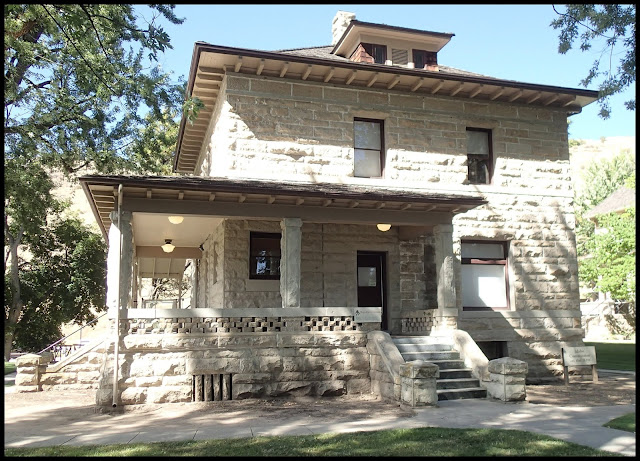 Prisoners mined nearby rock quarries to build the walls and cell houses that held them captive. It was renamed the Idaho State Penitentiary.The Administration Building ((below) housed the warden's office, armory, visitation room, control room and turn key area. 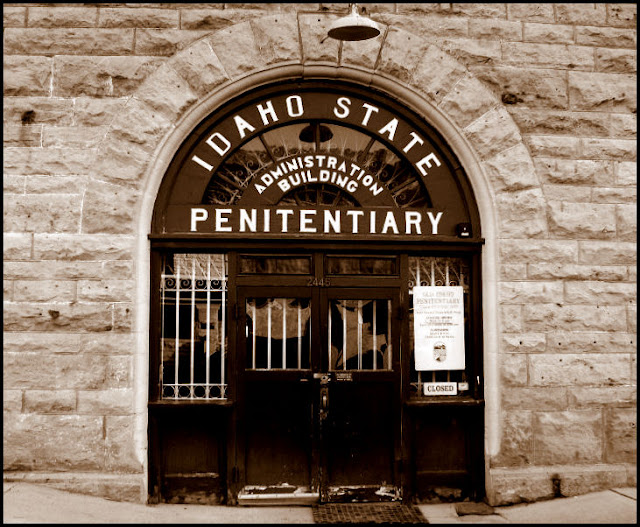 The difference between a jail and a prison/penitentiary is the length of stay for inmates (short-term vs. long-term). Jails are run by local law enforcement or local government agencies and designed to hold inmates awaiting trial or serving a short sentence. A prison or penitentiary is operated by a state or the federal government.

Over the next 101 years, over 13,000 convicts resided at the Penitentiary, including 215 women. At least 110 prisoners died from old age, illness and murder. Only 11 state executions have taken place in Idaho’s history; 10 were carried out at this penitentiary. 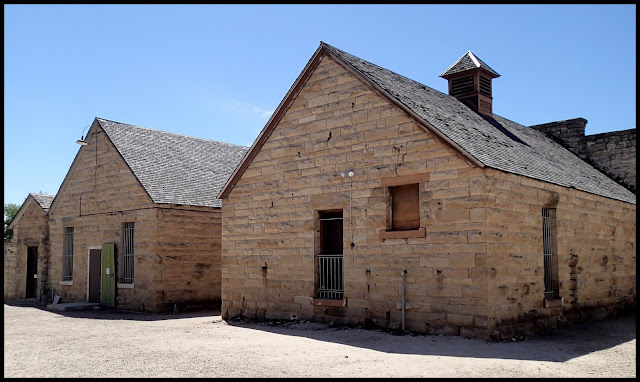 The penitentiary confined up to 600 prisoners at one time. Inmates endured inhuman conditions. The sandstone that formed its walls was plentiful and inexpensive building material, but also intensified cell temperatures. In retained the heat in summer creating an oven effect; in winter, walls held the cold, chilling prisoners for months. 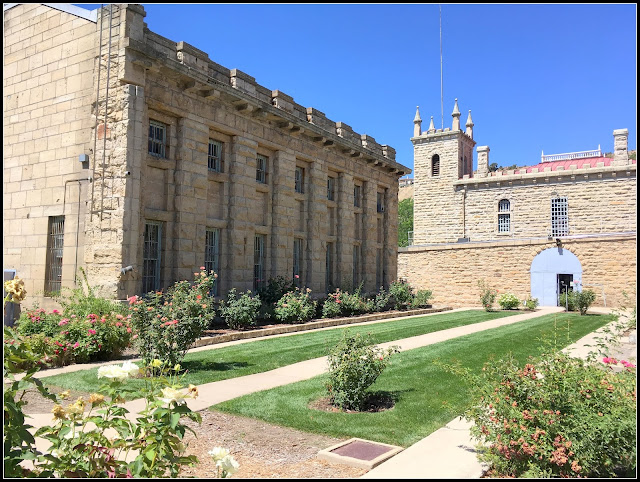 Proper plumbing wasn’t installed until the 1920s, before then cell toilets were just buckets. These unsanitary conditions were complicated by the prison’s poor ventilation system. In later years, cells were remodeled with indoor plumbing. 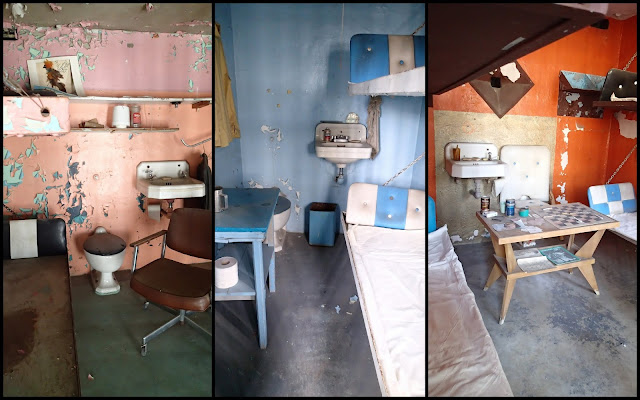 Many prisoners personalized their cells by repainting them and adding some pieces of furniture. They were still far from comfortable accommodations as you can easily see in the above photos. 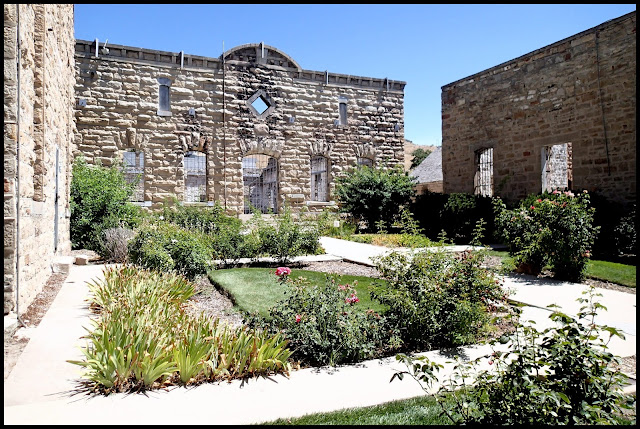 The Rose Garden (above) was once used to execute prisoners by hanging and 6 of the 10 executions in the Penitentiary occurred here. While it sounds a bit gruesome, the story goes that folks had picnics in hills outside the prison walls to watch these executions.

By 1935, it was one of the most violent penitentiaries in the U.S. A 1971 riot that lasted three hours caused $25,000 in damage and the death of an inmate after the discovery of an escape tunnel. 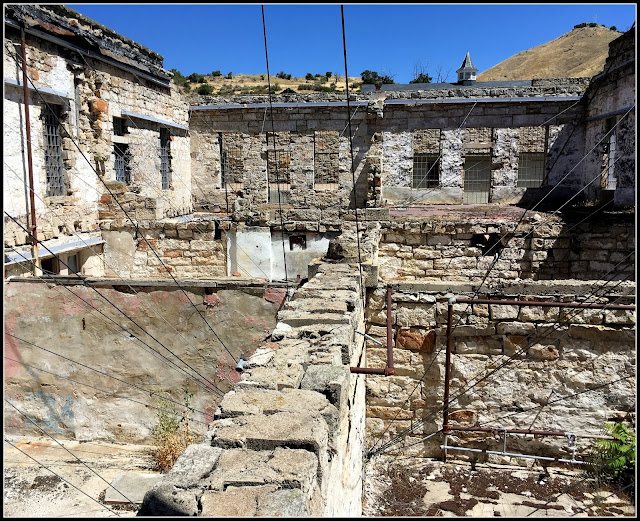 Two years later in a1973 riot, prisoners burned the chapel and dining hall (above), which had been designed by an inmate George Hamilton. They also destroyed cell house 2 and damaged many other buildings. Shortly afterwards, 416 prisoners were moved to the new, more modern Idaho State Correctional Institution south of Boise. 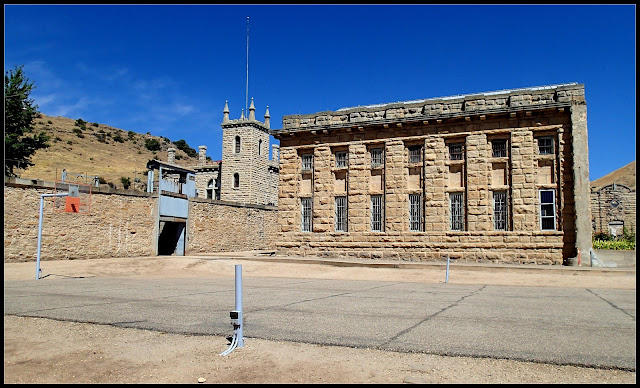 Inmates boxed and played sports  (baseball, basketball, handball, tennis, horseshoes and football) in an outdoor recreational area (above). The baseball and softball teams were named "The Outlaws" and often played and defeated teams from across the Treasure Valley, allegedly because they had a lot of time to practice. 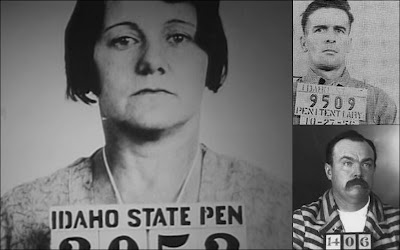 The three most famous inmates were Lyda Southard, Raymond Snowden and Harry Orchard.

Snowden was dubbed "Idaho's Jack the Ripper.” Convicted of murder in 1956, he was sentenced to death by hanging. It was a botched (and gruesome) execution as when brought to the gallows, the trap door was pulled, but the noose didn't break his neck. (We were told that he struggled 15 minutes before suffocating). He was also the last execution at the prison.

Orchard assassinated former Idaho Gov. Frank Steunenberg in 1905 and admitted to several other killings. Sentenced to death, a judge commuted his sentence to life in prison (not sure why). He spent over 45 years in prison, the longest sentence served by any inmate, and died in 1954.

Southard was Idaho’s most famous female serial killer, known as Lady Bluebeard. She was said to have poisoned her daughter, four husbands and a brother-in-law, all by the time she was 27 to collect their life insurance. Arsenic was her poison of choice.

In December 1973, the penitentiary was shut down. The buildings, were left exactly as they were at the end of the 1973 riots. From the smoke and fire-blackened stone walls to calendars hanging on the cell walls. 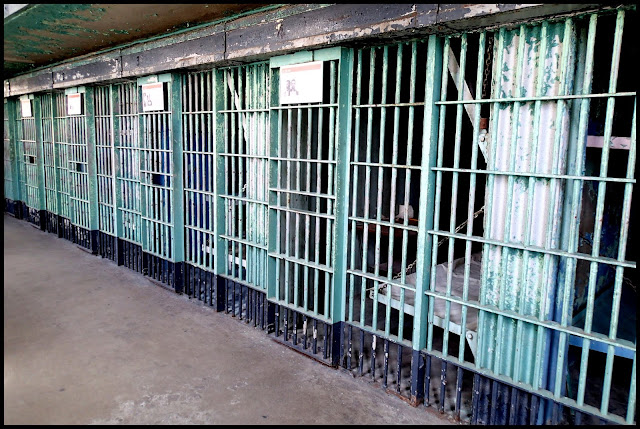 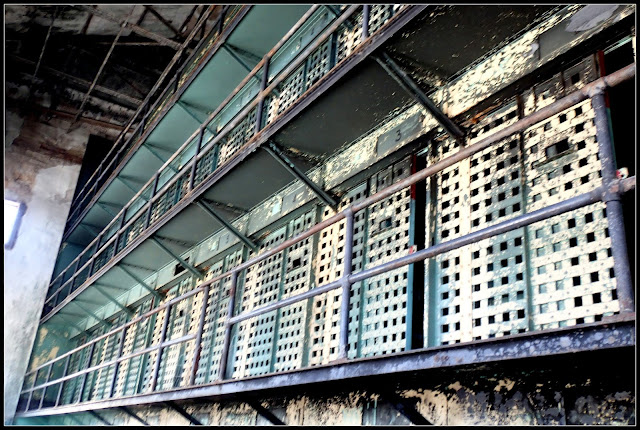 Cell House 5 was Maximum Security where unruly and violent offenders stayed. This building also served as a permanent place of solitary confinement. It includes a built-in gallows and "Death Row.” 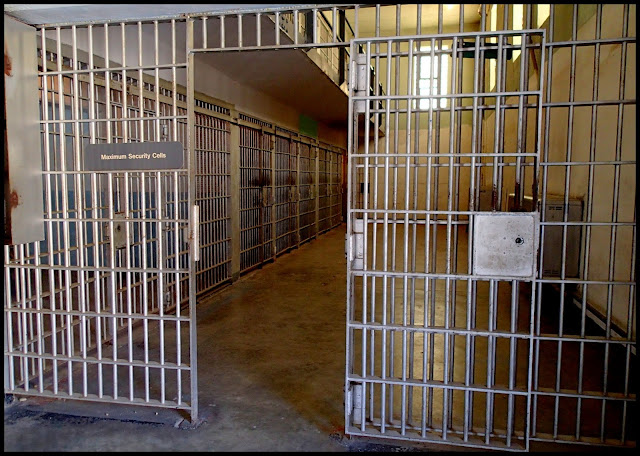 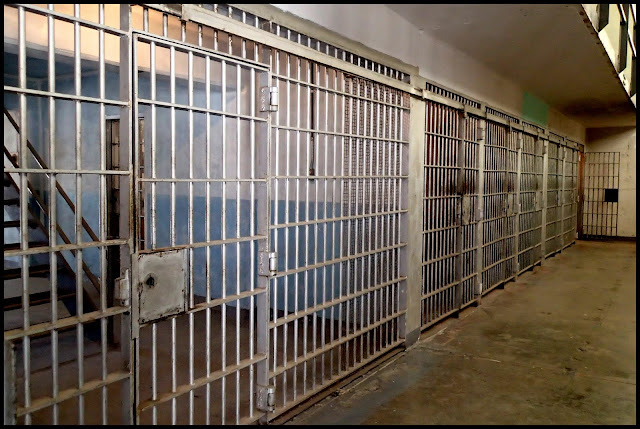 The Women's Ward was a separate building built in 1905-1906. Prior to its completion, women did not have separate quarters. This building had seven two-person cells, a central day room, kitchen and bathroom facilities. It's where the the infamous Lyda Southard (Lady Bluebeard) was incarcerated. 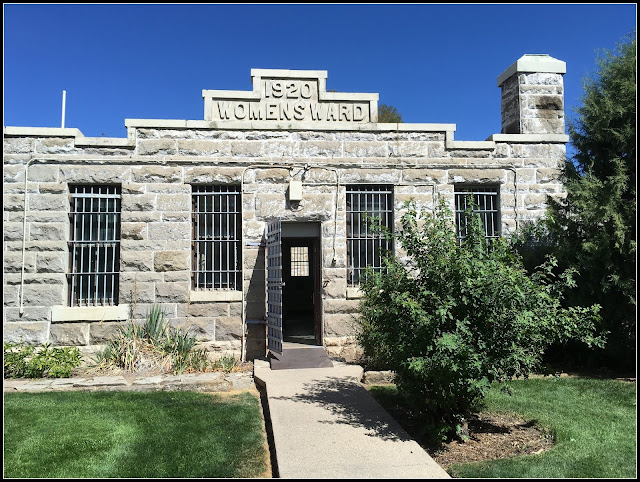 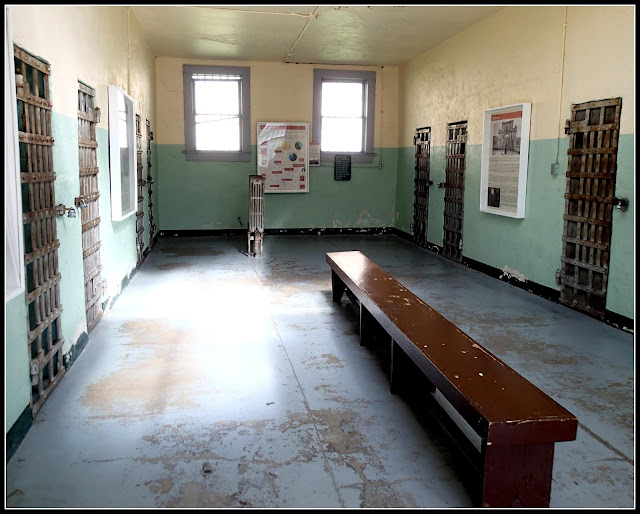 Solitary confinement consisted of two sections. The first, built in the early 1920s, was called the Cooler. Although built for solitary confinement, each cell contained 4 to 6 men. The second section, called Siberia by inmates, was built in 1926 and housed twelve 3 x 8-foot cells, with one inmate per cell — really tight quarters by any standard. 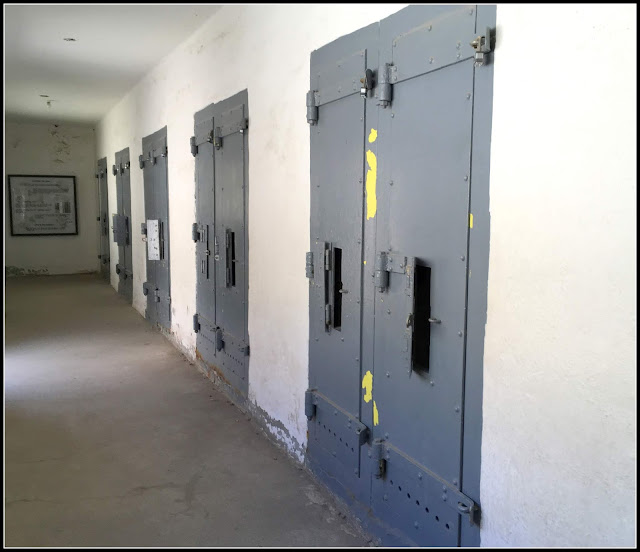 The prison is believed to be haunted, and was featured on an episode of the Travel Channel's Ghost Adventures show. It's also been featured in many written articles.

If you're ever in Boise, Idaho, this is a must-see historical attraction, even if the living conditions or prisoners back then can be hard to imagine.

Old Idaho State Penitentiary offers guided tours in addition to self-guided ones. Numerous exhibits throughout the buildings show mug shots of inmates and detail their crimes and history. Admission cost which includes the tour was a great deal at $6 for adults, $4 for seniors, like us and discounted costs for children who must be accompanied by an adult. 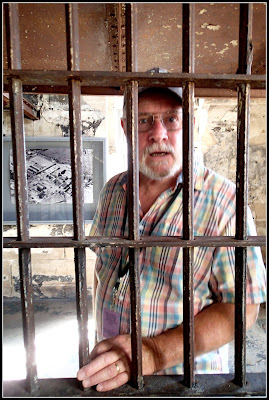 Just be sure to leave before the doors are closed (and leave with everyone you came in with).
Posted by Beatrice P. Boyd at 7:00 AM

this is truly a sad tale. the buildings are beautiful and if not for the story you wrote would look like an old college campus. no way to tell from the outside the absolute misery on the inside. I am very much claustrophobic, just seeing these cells makes me short of breath, beautiful photos of it all

It would be a place interesting to visit, no doubt. I cant imagine what went on behind those walls. The pictures tell most of the story tho!

Interesting! and rather spooky.
Prisons, like cemeteries, are sad places, but part of Life. Perhaps, these are also haunted places, because of the souls that got to leave the body either by natural causes or by acts of murder.

Those two in the first photograph look pretty dangerous to me.

those photos alone should be incentive to not break the law!!!

I love road trips and I've enjoyed following you on this ultimate, cross country drive! Definitely looks like you have been having fun : )

You did let Grenville out before you left didn't you? He looks a little worried in that last picture.

Hope your parole hearing goes well and you are free to continue your travels. :) A place with lots of interesting stories.

I've only been to Boise once, at the airport. One of my sisters lives in Buhl which isn't too far from Twin Falls. Interesting pictures, especially of the prisoners ;-)

I was not familiar with jail and such horrifying facts before.your photo struck me suddenly and then once i started reading it was no break there!
Thank you for the excellent and unique sharing and great great photos that reveal the intensity of post more gravely.
You

Hope its not too long before someone comes along to let you out, lol! Certainly a very interesting if not gruesome place to visit, enough to make certain you know that crime is not the way forward. Great post.

It looks imposing still. I can imagine a few ghost stories around such a place.

Our former jail in town has ended up a youth hostel.

Your posts are very thorough. You both remember and document well.

Fascinating place! And I must admit to having a good chuckle at you two behind bars, expressions are a hoot and also loved the last one of Pat.

And no, would not want to have to be sent there. Good grief!

Quite an impressive and terrifying place. I'm glad your sentence was short, and you were able to break free!