While on a cross country road trip from New Hampshire to Oregon, we're sampling foods along the way. (Eating out while traveling is calorie-free, isn't it?)  Here's a sampling of places we've tried in WY, CO and NE.

Spoiler alert: Most readers of this blog already know of our fondness for all things ice cream. This post is all about two special ice cream treats.

Being the ice cream addicts that we are, it was hard to resist signs that kept advertising these very low-priced ice cream cones. Since Little America was right off the highway, we went to find this treat.
We'd never heard of Little America and after a little on-line digging learned that Little America is by Grand America Hotels & Resorts. It's a chain of eight hotels and resorts found only in the Western U.S. The Little America chain, which started in the mid-1930s, was named for the 1929 base camp of Admiral Richard Byrd’s in Antarctica. 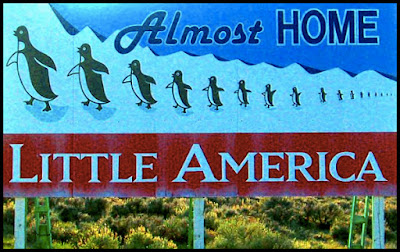 Since we're also fond of penguins (no surprise), it was fun to learn that for many years, penguins were used as the logo. They were featured on highway billboards along I-80.

Unfortunately, we didn’t get to see any as the last of the penguin billboards were removed in the early 2000s. (An online search came up with a dead end as to their demise.)

The Little America where we stopped is 39 miles west of Rock Springs WY, where we were headed for our lodgings. (This was a one-time treat for us, even at that bargain price.) 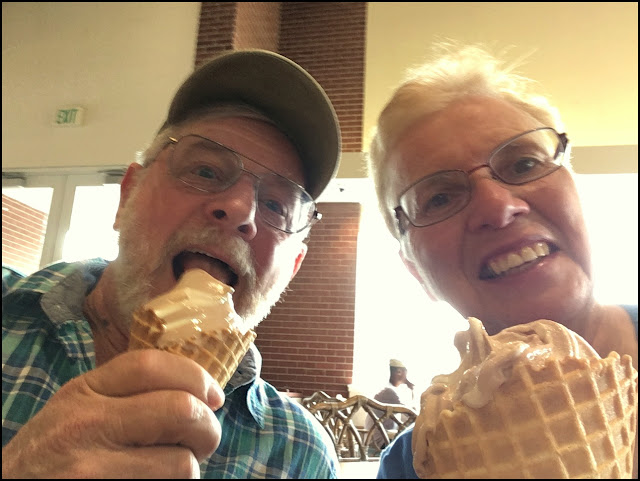 The waffle cones were a bit more and brought the cone cost to $1.55 — still a great deal. 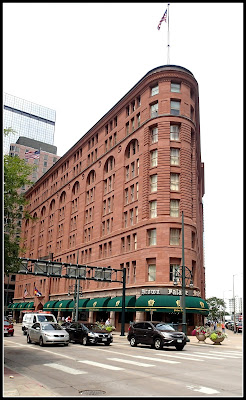 As blog readers know, this cross-country road trip is our anniversary gift to ourselves. On August 21, We celebrated our 19th wedding anniversary with a full day in Denver, CO.

We visited the state capitol and walked the 16th St mall. Plans to tour the Denver Mint, fell through as no tours were offered that week (maybe they needed time to mint more coins?). Similarly, the Denver branch of the Federal Reserve Bank of Kansas, which offers free self-guided tours of its money museum, was also closed for tours that day.

Then, we saw the historic Brown Palace Hotel and as it was starting to rain, decided to go in for lunch. The 126-year old hotel occupies an entire triangularly shaped block in downtown Denver. It’s the second-longest-operating hotel in the city and is one of the first atrium-style hotels ever built. It was built in 1892 of sandstone and red granite and named for its original owner, Henry C. Brown. On completion it was Denver's tallest building

There are several restaurants in the hotel. We selected the casual Ship Tavern, which opened in 1934, after the end of Prohibition. The distinctively nautical theme comes from a collection of model clipper ships throughout the tavern that belonged to the son of the hotel owner. (His wife suggested they might be better someplace other than their home.)

But, I digress. We shared news of our anniversary celebration with our waiter.  He told that the hotel offers a choice of dessert treat for all special occasions. We selected the Shipyard banana split — yes we shared. 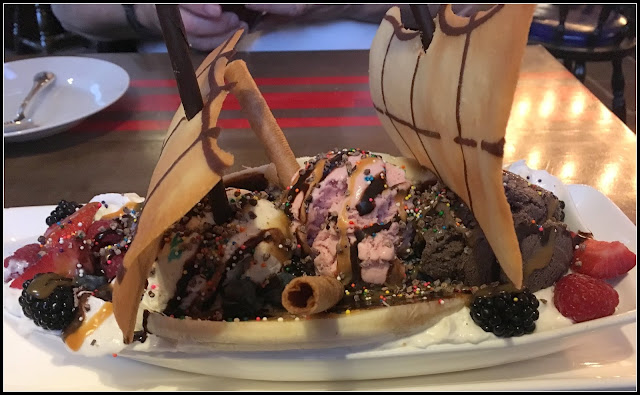 Thanks to the Brown Palace Hotel for this special treat. It was delicious.
Posted by Beatrice P. Boyd at 7:00 AM

Excellent selfie! The Brown hotel is a sight to remember.

Ice cream: we recently paid $29 for 5 cones. Imagine how much ice cream we could buy for that price. But it's a rite of summer.

Another wonderful post. You are certainly seeing some amazing sights and oh the ice-cream!!! Happy traveling!

I have been craving a banana split for days. That makes my mouth water.

I like the looks of the Brown Palace. beautiful building.. have not heard of Little America

We will be traveling fdown through Wyoming and Colorado on our way home to Texas next month. I'm going to be watching for those ice cream cones!!

Those cones are the perfect treat for traveling in the summer time. Looks like you are having a great time.

I'm an ice cream lover myself. No matter the season.

That banana split- it's like dying and going to heaven.

I don't know if you are back yet, but it is sooo hot today (and humid too). That ice cream sure looks yummy. Maybe I need to stop for some on the way home. Hugs-Erika

That banana split looks amazing! Glad you got to enjoy some ice cream treats for your anniversary. :)