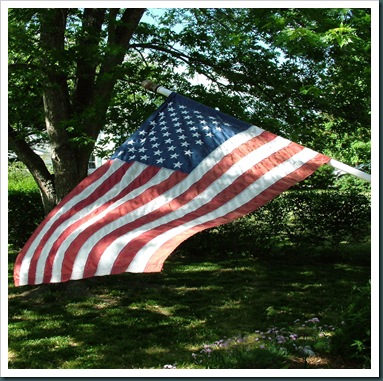 Formerly called Decoration Day, Memorial Day is a holiday set aside to remember those who have died in our nation’s service. 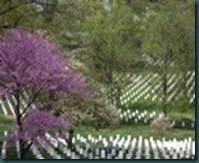 And this day of remembrance is very significant in view of last week’s  media reports that the military's worldwide counterterrorism mission (Operation Enduring Freedom) launched after the 9/11/01 terrorist attacks has claimed the lives of over 1,000 service members.
Traditional Memorial Day observances have diminished over the years. Some towns and cities still hold Memorial Day parades; however, most people seem to have have forgotten the meaning and traditions of Memorial Day. Many think the day is for honoring all dead, and not just those fallen in service to our country. In cemeteries, military graves are ignored or neglected. The proper flag etiquette for the day is often forgotten. When looking at your home from street level, the flag will look to be on the left (the flag's right). If the flag is on your porch looking out at the street, put the flag on your right – that’s its proper place.


Memorial Day is a half-staff flag holiday. The flag is displayed at half staff until noon and at full staff from noon to sunset.

Memorial Day originated in May 1868, when Union General John A. Logan designated a day to decorate the graves of Civil War soldiers. (The South did not observe Decoration Day and honored its dead on separate days until after World War I.) The name was changed to Memorial Day in 1882 to honor soldiers who had died in other wars as well. In 1971, Memorial Day was declared a national holiday falling on the last Monday in May.

Red poppies are traditional at many Memorial Day services. Moina Belle Michael, an American teacher in GA, was inspired by the 1915 poem In Flanders Fields  written by Canadian physician and Lt. Col. John McCrae during WWI. In 1918, Ms. Michaels conceived the idea to wear red poppies on Memorial day to honor the nation’s war dead after teaching a class of disabled servicemen after the war.

She started wearing a silk poppy one and sold poppies with the money going to benefit servicemen in need. The movement

caught on and  Michael was known as the "Poppy Lady."  In 1922, the VFW became the first veterans' organization to nationally sell poppies and two years later launched the Buddy Poppy program selling artificial red poppies made by disabled veterans.

been raised for the National Poppy  cause. Several months after her death, the U.S. government christened a "liberty ship" The Moina Michael and launched it un Savannah, GA. In 1948, the USPO issued a red 3 cent postage stamp with her likeness in 1948. The Georgia General Assembly named a section of U.S. Highway 78 the Moina Michael Highway in 1969.

However you observe Memorial Day – take time to remember those who have given their lives and who have made this day memorable.

Thank you for the history lesson. :) It's so important to remember those who have given us the freedom to enjoy this day.

There's a lot in your entry that I wasn't aware of. Thanks and I hope you both had a lovely day as I did.

I learned a lot too - most of which I didn't know either. It seemed a good idea to share especially today. Thanks for the feedback, Ginnie.

Thanks for visiting my blog and your kind comments. I'll be back to visit your blog again.

Thanks Elaine for the visit and comments. I'll be revisiting your blog too :-)

Quite an interesting post! I'm glad I visited, and thank you for stopping by my blog and for your kind comment. I'll be back!

Thanks Mona for your comments and dropping by. We enjoyed your blog posts and bird photos and will revisit often. Please drop back anytime. Dorothy & Pat (aka Beatrice & Grenville).