No, we did not see this accident on our NC road trip. But we did see these movie accident leftovers in Dillsboro, NC. 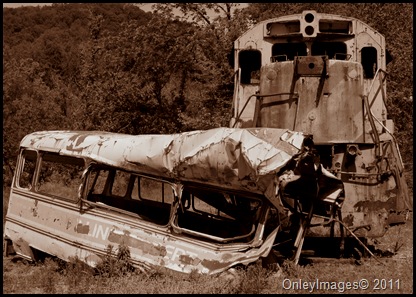 This “crash” shows the remains of the prison transport bus and freight train crash from the 1993 film, The Fugitive, which starred Harrison Form and Tommy Lee Jones and was based on the 1963–1967 television series of the same name, starring David Janssen.

For those unfamiliar with the storyline, here’s a recap: Helen, the wife of Dr. Richard Kimble, a well-respected Chicago surgeon has been murdered in their home. Although Dr. Kimble maintains that a one-armed man was responsible, he is charged with the murder, tried, convicted, and sentenced to death. But, on the way to prison, the transport bus veers off the road, rolls down an embankment and is then hit by a freight train. Kimble escapes and the story continues with his pursuit of the killer and the police pursuit of him. 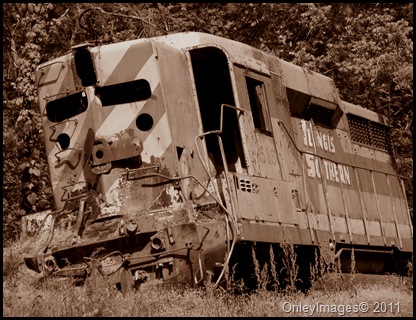 The film was directed by Andrew Davis and was one of the few movies associated with a television series to be nominated for an Academy Award for Best Picture. It lost out to the black and white film, Schindler’s List.

We never saw the film, but after hearing about the now-aging wreck, took a 15-minute road trip from Bryson City, NC to Dillsboro. 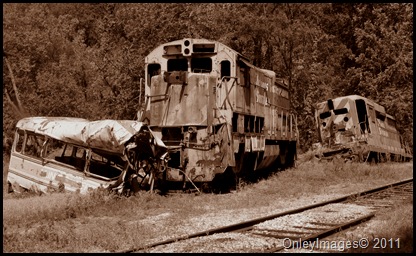 While more than half of The Fugitive is set in rural Illinois, a large portion of the principal filming was shot in Jackson County, NC in the Great Smoky Mountains. The wreck scene involving the prison transport bus and freight train was filmed outside Dillsboro, NC along the Great Smoky Mountains Railroad (GSMRR) not far from the RR’s maintenance yard.

A real train was crashed for the film, but both locomotives were empty shells purchased by the movie company for scrap value. All units (including 777, which never appeared in the film) were painted in the Illinois Southern red-gray-yellow paint scheme. Director Davis had one chance to get it right. The wreck was real with the train pushed along by a GSMRR locomotive, GP7 777. 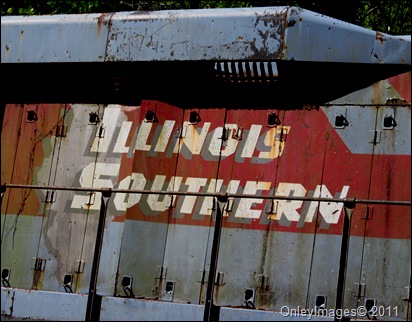 Everyone – the producer (Davis), engineers, stunt doubles, and the movie's insurance company – expected that the train would crash into the bus at 35 mph, instead it flew through the shot at 42 mph. 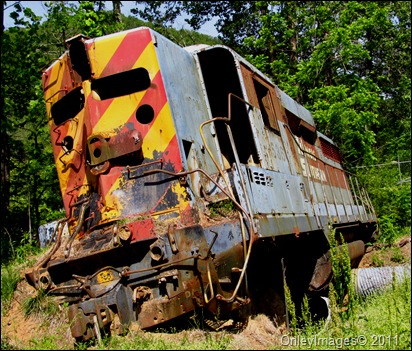 It’s stayed in this same location for the past 18 years. Riders on the GSMRR excursion train can see the wreckage when leaving the Dillsboro depot. However, it’s more difficult to see it from the roadway above as the area is quite overgrown. 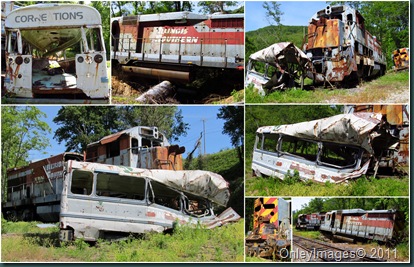 The location is not promoted as a tourist attraction since it is located on GSMRR private property, which is not open to the public. Grenville had to sign a release waiver; we were allowed to drive to the wreckage with instructions not to touch or get too close to it.

If you want to see the 1993 film accident scene from the bus careening off the roadway to the freight train striking it, you can view a movie video.

And, as Grenville mentioned in an earlier post, another film shot on the GSMRR was the 1999 romantic comedy, Forces of Nature, starring Sandra Bullock and Ben Affleck.

During the course of their travelling together, things keep happening like being on the wrong car of a train. The GSMRR coach, Royal Palm, was used in the film with the fictional American Federal RR name and it remains in that car that we rode this week. 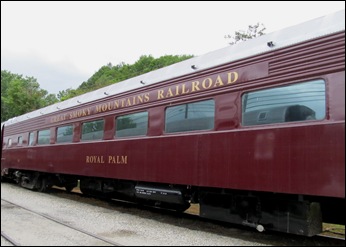 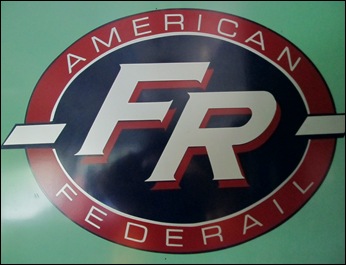 Interesting! I like the photos, and the sepia treatment works very well with the subject. Although I didn't see the movie, I did watch the Fugitive on TV every week. I guess that dates me a bit....

So they actually let everything just stay as it was! I love places like that but it´s to bad it can´t be used as a tourist magnet, because I think lots of people would love to see it, I would :-)

I'm glad to hear this wasn't from a "real" accident. Looks like it would have been quite nasty if it had been.

Some quick answers.... The engineer that i rode with, Dale, was at the controls of the engine that pushed the dummy engine. They constructd a seperate track for this scene. It has a slight down slope. He said he only gave the dummy engine a slight push and it took off.
This scene is at the far end of the GSMRR maintenance yard and would be a dangerous place for tourists. John the dispatcher said that they used to let folks into the yard but to many decided that they had to touch, sit on, take suvineers, so they stopped it. I had to sign a waiver before i could go in.
Grenville

Hi! I am driving up 441 N next week and I would love to see this up close and personal. Could you please tell me the name or location of the office you have to sign the waiver. I called the GSMRR in Bryson City and they do not seem to know anything about walking by foot to this. I would greatly appreciate any help you could offer. I am excited to see this! Thanks!