While on a cross country road trip from New Hampshire to Oregon, we're sampling foods along the way. (Eating out while traveling is calorie-free, isn't it?)  Here's a sampling of places we've tried from from VT to OH.

There’s always a NJ connection and we found it in Bennington, VT— The Blue Benn, a diner that’s true blue from its exterior to it's interior stool seating was shipped from our home state of NJ to Bennington, VT. 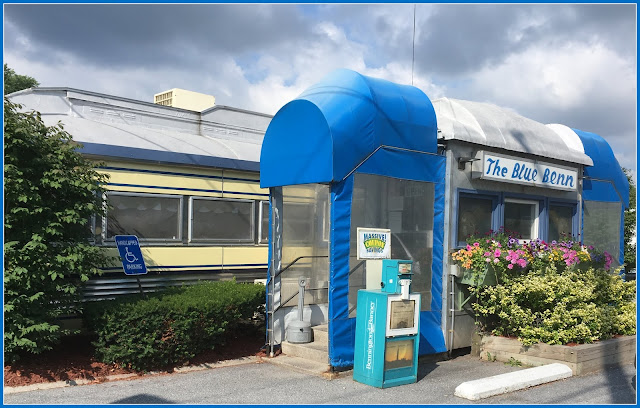 It was assembled on-site along Rte 7 in 1948 after the diner body was manufactured by the Paterson Vehicle Co., (known as Silk City) in Paterson, NJ during the 1940s. Eating here is like taking a step back in time. 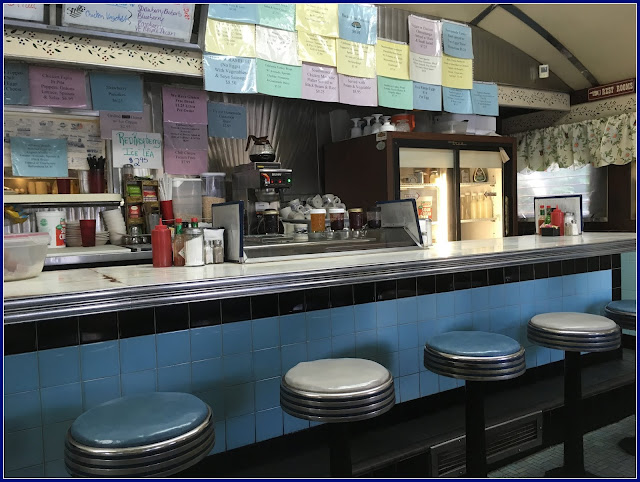 The diner’s bright blue color is a standout and after you enter it's line taking a step back in time. The classic lunch counter is complete with stool seating; there’s also booth seating, which is at a premium most days, especially weekends. 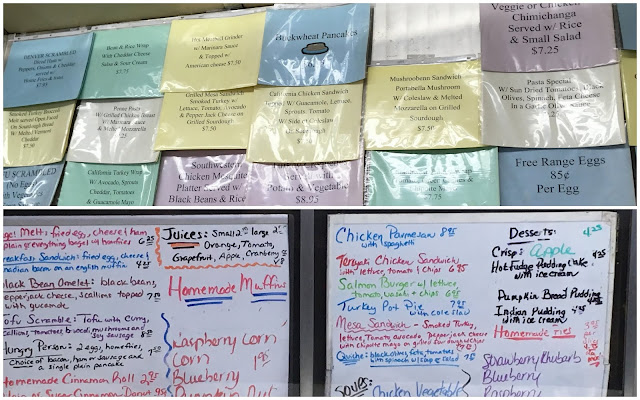 Check out the menu and ifs those choices aren't enough, then look at the many signs and on boards plastered behind the counter. You might need some time, there’s a lot of signs. 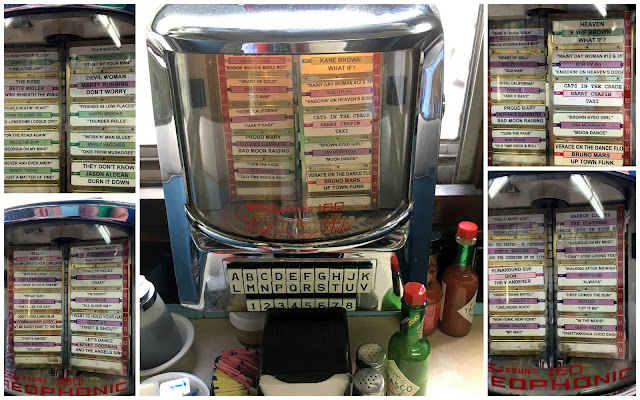 Here's a real treat, do you remember when diners included small, wall-mounted jukeboxes on the tables. Guess what,  they're at the the Blue Benn, where the song selection range from country classics. 1940s hits to old time rock and roll. And, you get two plays for a quarter. What a deal! 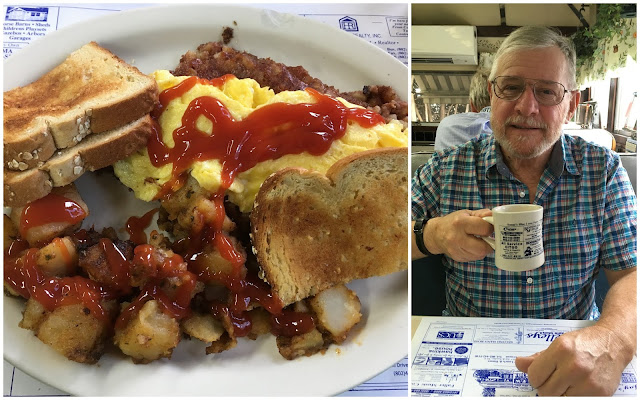 The Blue Benn is a diner in the truest sense, so don't look for gourmet cuisine. But you can find traditional favorites like pot roast, turkey dinner, meat loaf and mashed potatoes served in plentiful portions. And, like most true diners, breakfast is served all day. and that's how we celebrated Grenville's birthday here.

The Blue Benn has been featured in publications such as Vermont Life, Martha Stewart and Yankee magazines, and the New York Times. If you go, leave the credit cards and personal checks home as it's a cash-only eatery. 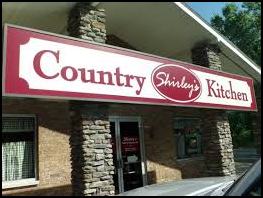 Shirley’s Country Kitchen on Old French Road in Erie, PA is a local breakfast place where you have breakfast all day during open hours. t's also one of those places where everyone would know you name, if you lived there.

Bakery items are fresh baked on site by the owner, Shirley, who formerly ran a bakery from her home. There’s seating for 50-60 people at small and large tables. We ate our breakfast before I remembered that we hadn’t taken a photo. (We were hungry that morning.) 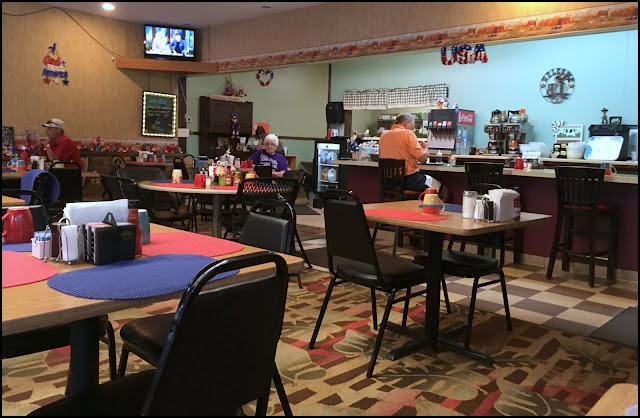 Denny’s Ice Cream Stand on Parade St. in Erie, PA, is the place to go if you’re there on a hot summer day (as we were). This is a one-of-a-kind place that also serves fast food items, but it seems that many folks go just for the ice cream as we did. 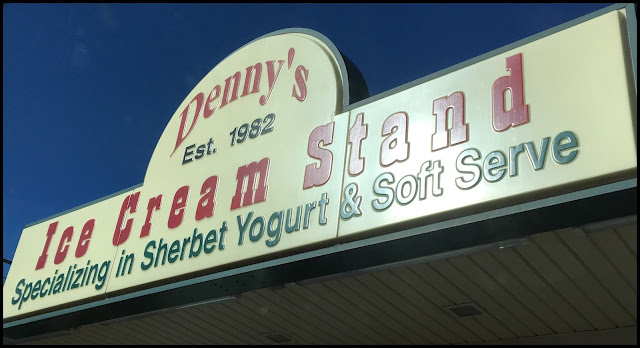 You won’t find it anyplace else as this is its only location. It's a take-out only with just a couple of benches near the parking area, so we opted to enjoy sundaes in our car. The most popular flavor is one called is Blue Moon, which we didn't try (maybe next time).

Sure, most folks have seen or eaten at drive-ins that serve hot dogs and hamburgers. But,
what about a place where a turkey sandwich is the featured and best known menu item and the featured beverage is frosty-cold root beer? 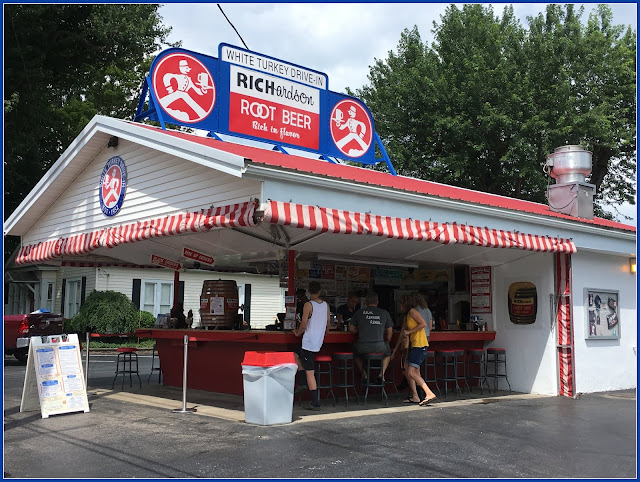 If you answered No, then you haven't been to the White Turkey Drive-In, Conneaut, OH. This place is a go-to local place for fast, comfort foods including not only turkey sandwiches, but burgers, hot dogs & root beer floats and more. 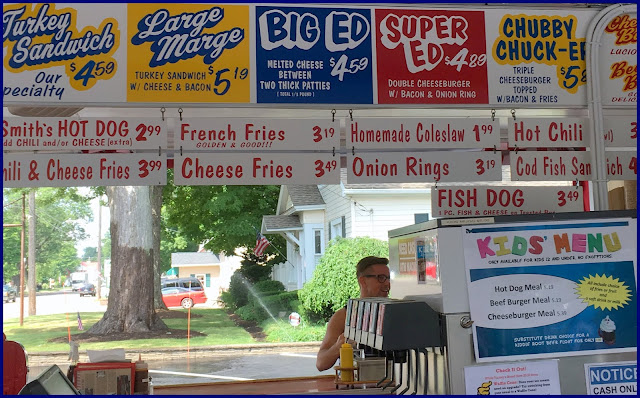 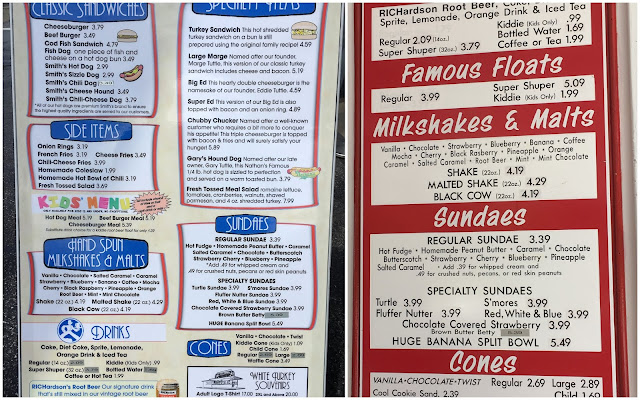 The White Turkey Drive-In is not named after its founders, here's a surprise — it's named after a breed of turkey. Years ago original owners Eddie and Marge Tuttle visited a RICHardson Root Beer stand on vacation. They liked the rich flavor of the drink so much that they bought the franchise in 1952 and opened their own restaurant. 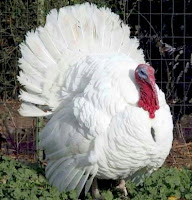 The Tuttles operated a turkey ranch at their Conneaut home and wanted to create a menu item to showcase their farm-raised turkey, the White Holland breed. That's how, Marge eventually created the now famous turkey sandwich which is shredded turkey meat served with mayonnaise on a hamburger-like bun.

Yes, we ordered a turkey sandwich, but it was a "to go" order for lunch on the road and I neglected to take a photo before  devouring eating it (it was tasty).

Root beer remains the most popular beverage and Grenville sampled one "just to make sure" it was "that good" and he said that it was. 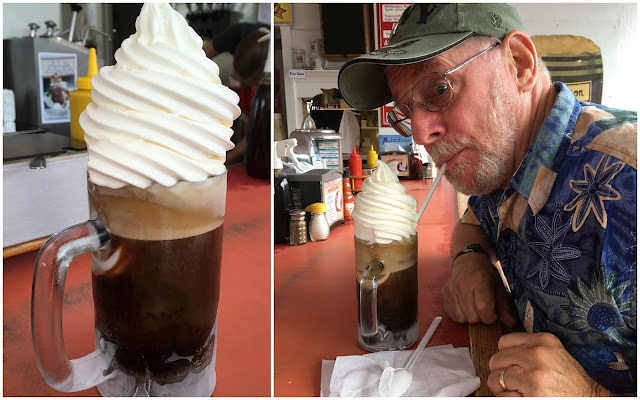 A vintage RICHardson root beer keg on the counter is used to dispense the root beer. 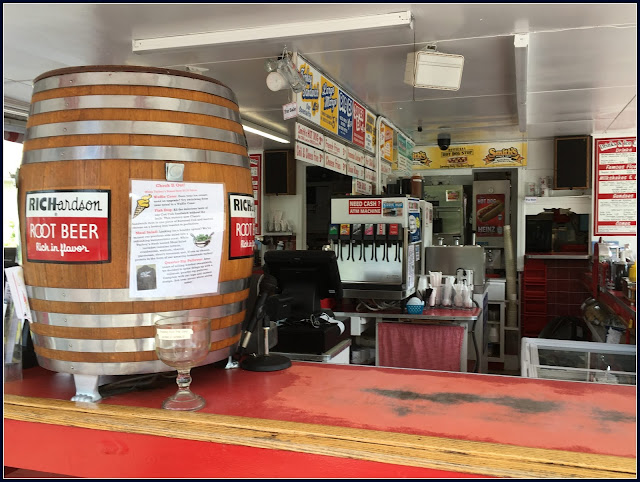 Currently, the third generation of family members operate the business which is only open during summer months. It's an outdoor dining experience with counter seating on stools or in a shaded area in back of the drive-in. If you plan to stop, leave the credit card behind, it's a cash-only dining experience. 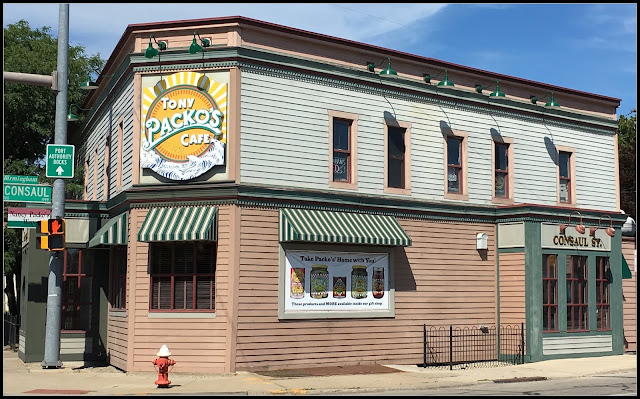 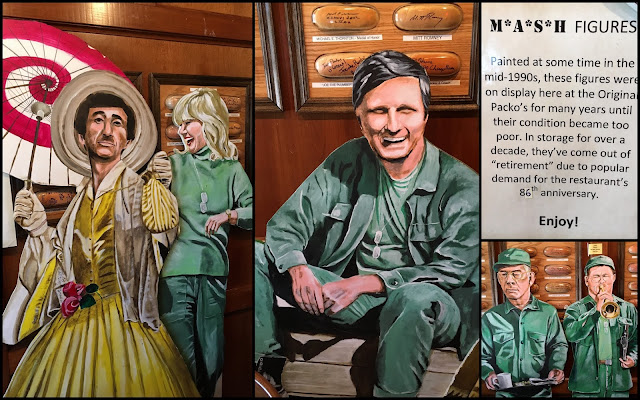 Tony's Packo’s signature sandwich resembles a hot dog known as the "Hungarian hot dog.” and the cafe is billed as "the place where man bites dog". The "hot dog" is a Hungarian sausage called kolbász, not unlike Polish kielbasa, about twice the diameter of a conventional hot dog. Grenville ordered the MOAD (mother of all dogs) and yes, he ate the whole dog. Mine was a "regular" dog. 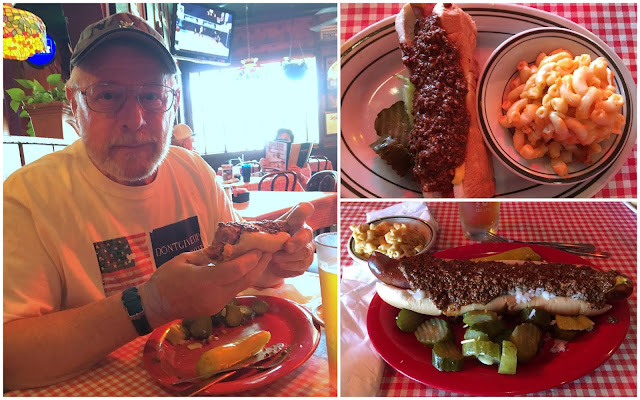 The other thing the cafe is noted for is the large (on all the walls) collection of celebrity-signed hot dog buns, replicas not the real thing. The tradition dates to 1972 when actor Burt Reynolds stopped in and when asked for an autograph, signed a bun. Ever since, visiting celebrities sign a foam air-brushed bun which is then displayed on the walls. We spent time before we found Jamie "Klinger" Farr and Gary "Radar" Burgoff. 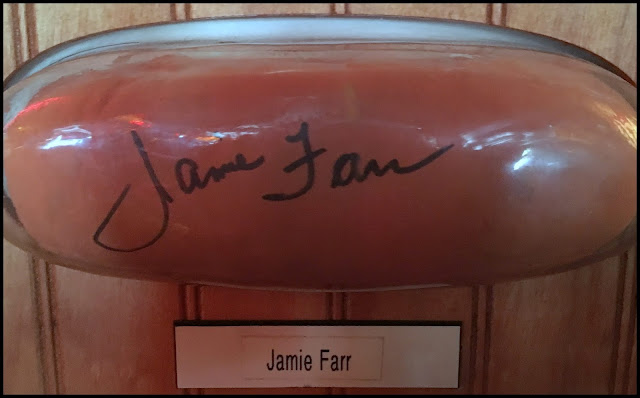 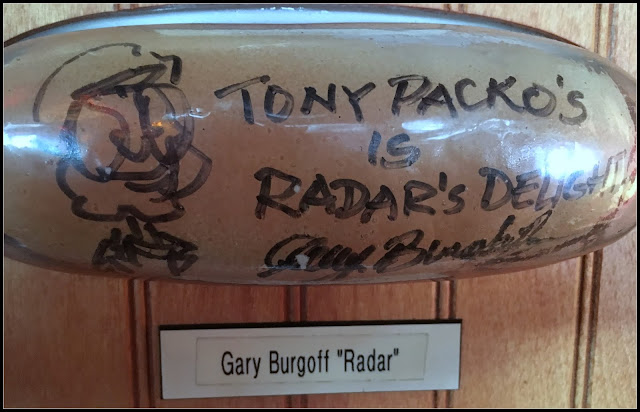 If you dine at Tony Packo's, you'll find that "hot dogs" are most expensive than you thought.

Handel's Homemade Ice Cream & Yogurt in Toledo, OH, (and 7 other states) was named one of the best ice creams in the world by The 10 Best of Everything and Everyone Loves Ice Cream. With credentials  like that, of course, we had to try it when in OH. 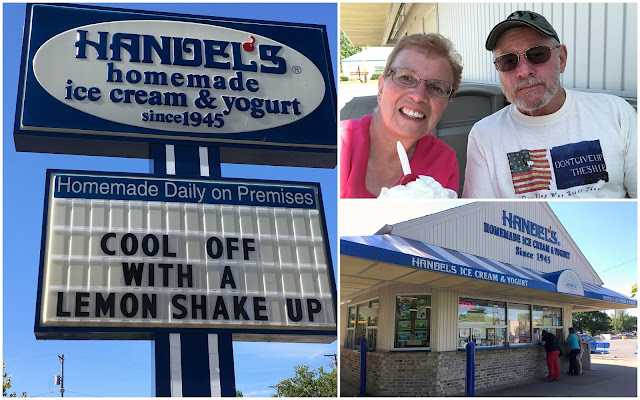 In July 1945, Alice Handel began serving ice cream out of her husband's gas station in Youngstown, OH. The first batches were made using old-fashioned recipes with fresh fruit picked from her own backyard. Today, there's close to 100 flavors of homemade ice cream and yogurt made fresh daily using products, equipment, methods and recipes exclusive only to Handel’s. Unfortunately, we didn't have the time to try more than a couple.

These were some highlights of eateries we enjoyed during the first week of our cross country travels. There's (lots) more to come . . .
Posted by Beatrice P. Boyd at 7:00 AM

This would be a fun part of the trip. Gotta love that retro diner.

Food is what keeps us going and enjoying, especially on a trip.
Great pictures of the food and food establishments!

What fun to visit the different food places and enjoy their specialities. Your trip made me hungry! LOL

Great post and fun to live vicariously through it :) All part of the fun eating at different places along the way. Looks like you're having a lot of fun. Continued happy traveling!

What a fun bunch of family run restaurants you visited! It is a little odd that a turkey sandwich be the main feature of one! I also like finding interesting (not fancy) places to eat when we are out driving around. -Jenn

I would LOVE that diner!! And ice cream places, yum! Sounds delightful.

A whole lot of retro!

These are my kind of place and I LOVE the diner!!!

Looks like some good food. My kind of chow for sure. Glad to see there's more than chains all over this country. Safe travels. Hugs-Erika

I would have enjoyed every one of them. The diner was so interesting to see. The root beer float was a work of perfection.

A friend of mine was going to Tony Racko's with a bunch of his friends. If a man wears a dress he gets his meal free. I just realized I never got that dress back!

This was a fun post. I liked hearing about each place you stopped. You must have passed by where I live (within an hour or two's drive, anyway). I live in Akron, Ohio. That root-beer float is impressive-looking!! I've been to Tony Packo's before--several years ago.

Tasting you way across the country - what a great treat. Diners and ice cream are two of my favorites. I need to check out that diner in Bennington!

How fun to go to all those different places. Thanks so much for taking us along with you. I really enjoyed this post.

Wow, they were some very impressive eateries. Such fun places to enjoy some old favourites.

Looks like you are eating your way across country. I love those places. But seriously...ketchup on your eggs? I've heard of such but never met anyone who slathered their breakfast with ketchup.