Castle Hill in Ipswich, MA, is a grand estate from what's been termed the Country Place Era, a period ranging from 1890 to 1930. During this time, wealthy families built country estates that included extensive gardens. These estates were only occupied during summer months when families sought to escape the urban heat and crowds. 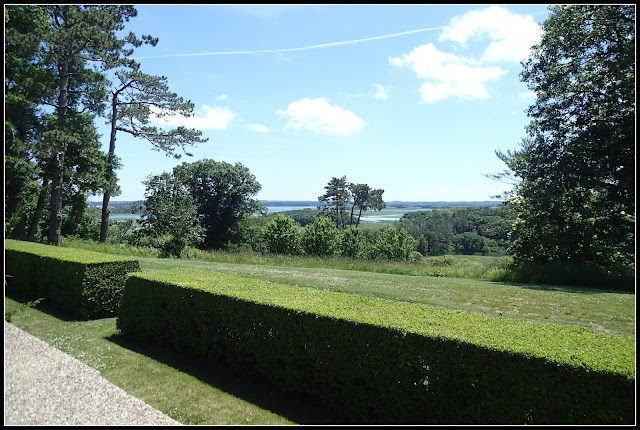 Chicago industrialist Richard T. Crane manufactured and sold brass goods and plumbing supplies. In 1910, he bought property which would become known as the Crane Estate. Over the next 20 years, he worked with some of America's leading building and landscape architects to build his summer retreat.

Crane commissioned an Italian Renaissance-style villa, with stucco walls and red tiled roof. It featured hilltop vistas of the Atlantic in an area of the property called Castle Hill and included a farm and estate buildings, designed grounds, gardens, and natural areas. 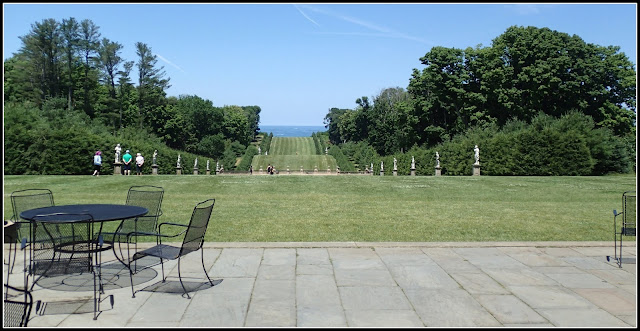 Crane hired the Olmsted Brothers, sons of Frederick Law Olmsted (who created Central Park in NYV, Brooklyn's Prospect Park, Boston's Emerald Necklace and others), to design the landscaping. By 1912, the Olmsteds had fashioned a series of ornate terraced gardens, with a grass mall or a "Grande Allée" lined with evergreens cascading from the top of the hill straight down to the water nearly half a mile away. It was lined with classical-style statuary at regular intervals, which are still in place today as seen above.

But his wife, Florence disliked the mansion calling it "cold and drafty." Crane told her that if she would give it 10 years, he would replace it if she felt the same way. 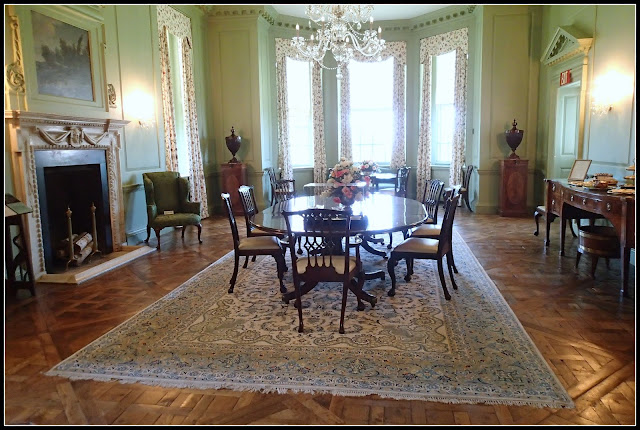 She did and so the first house on Castle Hill was razed. In 1928 it was replaced with a 59-room mansion that included a main facade in the 17th-century Stuart style, a library with  carvings imported from an English country house, parquet wood flooring, and paneled interior rooms from an 18th-century townhouse in London. 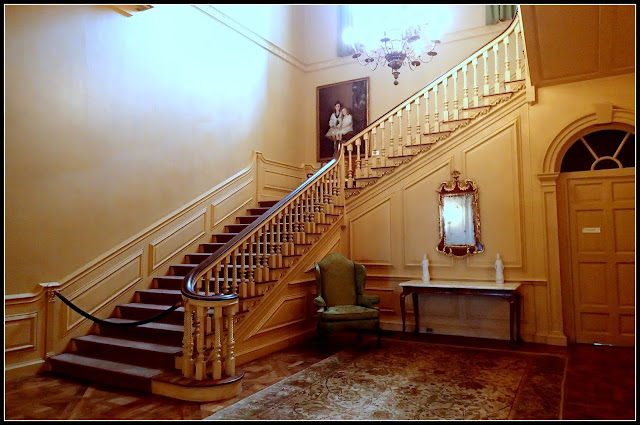 The mansion or Great House is furnished with period antiques. 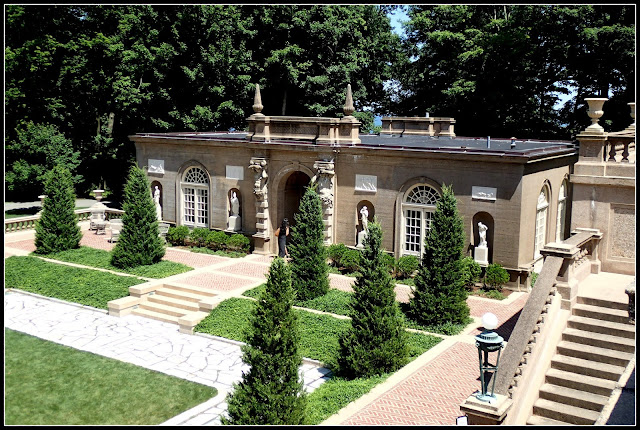 An opulent "casino" was built at its midpoint with a saltwater swimming pool, bathhouse, guest cabanas and large indoor ballroom. The pool is long gone and has been filled in, but the white walkway still forms its outline.

Two main gardens, the "Italian Garden" and the "Rose Garden," were filled with plantings, landscaped walkways and fountains. The landscaping remains largely unchanged. 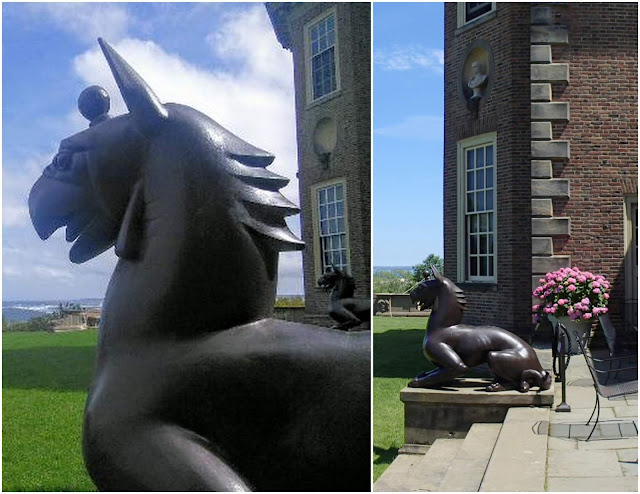 A pair of very large seated griffins (a mythical creature with the head and wings of an eagle and the body of a lion) grace the entrance to the north terrace overlooking the sea. These were a gift from employees of Crane Co. on completion of the new home. 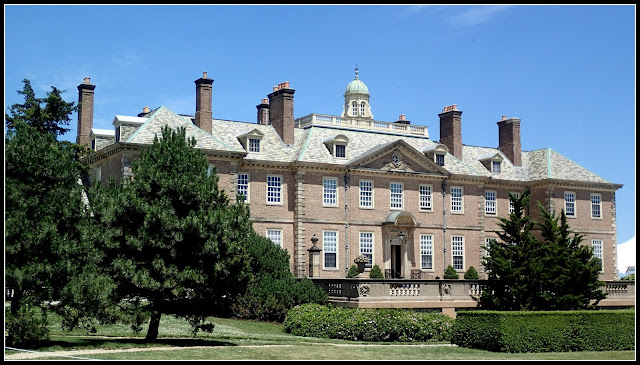 After the death of Richard Crane, the estate passed to his wife. In 1945, the Crane family donated much of their private beach and dunes to The Trustees of Reservations, a private, non-profit land conservation and historic preservation organization. When Florence Crane died in 1949, the remaining property and the mansion, were given to The Trustees, who maintain the property and offer seasonal tours of the historic mansion.

Our visit was on an especially warm day and we agreed that this location was a great summer retreat. Thankfully, it's not for sale, just imagine the upkeep and maintenance! 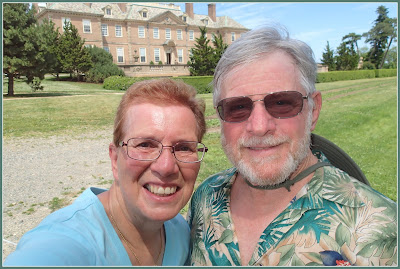 In recognition of its state of preservation and design, the 165-acre Crane Estate and the Castle Hill mansion were designated a National Historic Landmark in 1998.
Posted by Beatrice P. Boyd at 7:00 AM

Mind-boggling. If you don't like one mansion, tear it down and build another.

It looks very well kept. This kind of mansion is good for touristic purposes, not for making it a home; too big, too cold, too expensive to maintain.

Thanks for the tour....it is amazing and so beautiful. It reminds me of the Biltmore Estate in Asheville N.C. I cant imagine living in a house like that.

Opulence of this magnitude always blows my mind. It is such an example of the huge gap between the "Haves" and the "Have nots"...
but interesting nevertheless.

lots of beauty there and I would like to have a summer home somewhere cool, but not sure where that would be. maybe Africa since it is winter there or Austrailia, because the whole usa is HOT

Wow, that's quite a place! I agree--I wouldn't want to have to keep it cleaned and maintained.

Now you’re in my “neighborhood”. We live right next to Ipswich and go to Crane beach in the summer. This is a beautiful property, and I didn’t know the story about the original mansion being torn down. Interesting!

Gorgeous. It must be nice to have a huge home like that.

What a beautiful place!

This is such a wonderful tour you have given. It was an amazing era and to think they had enough money to maintain it and have servants to make it all work. Thanks for sharing.

Wow. I have been to Crane's beach several times but never to the house- and I think I need to do that. It's amazing, and you got such great photos of it. Is it open on a regular basis or just on occasions- I am guessing you know that as you wet there. Did you go down to the beach? It is a really beautiful beach too-although right now I bet the greenhead flies are out which isn't a good time to visit the beach. I am finally back and trying to do a bit of catching up as we went to Newfoundland for a week. Hope all has been well. Hugs-Erika

It's quite amazing the fortunes that were spent on summer homes.

You took us on a wonderful tour. I wouldn't want the maintenance and upkeep costs either.

Thanks for coming to visit my blog and introducing yourself to me. Since I was born in Lawrence, MA, and have family and memories in MA I was excited to read this post, although this is a place I knew nothing about, I was interested to learn about it. I can't quite get my brain around the idea of living in such a grand place and would be overwhelmed to have to try to maintain it, though. I am following your blog now and will put it in my blogroll so that I can easily visit you again :-) I lived in Saugerties, NY for 15 years and traveled up to NH a number of times...I especially enjoyed visiting a shopping center in an old woolen mill in Keene, NH. Now off to explore more of your blog!

Olmstead also did the landscaping for the Biltmore Estate in Asheville. They recently installed a lovely sculpture of him overlooking the estate with the magnificent mountains in the background.

I love the old architecture and when people built buildings to last for more than 30 years.
Thanks for the visit! Great pix!