We're currently on a cross country road trip from New Hampshire to Oregon and posting about sites along the way. This post is about a stop in Conneaut, OH.

Sometimes you'll find the interesting places when least expected. That’s what happened as we drove from Erie, PA to our next stop (Toledo, OH). Grenville, a long time RR fan spotted a sign for the Conneaut Railroad Museum.

Usually small local museums are only open weekends or specified days/hours. We were there on a mid-week afternoon and didn't expect to find it open. To our surprise, a sign said it would open at noon, shortly after our arrival. The museum is maintained by the Conneaut Historical Railroad Museum, Admission is free and donations are accepted, which was a small cost for such an unexpected and informative stop.
The museum is housed in a passenger station originally built for the Lake Shore & Michigan Southern in 1900 and the building is on the U.S. National Register of Historic Places. It's full of railroad history and information. There's a model railroad setup in a back room which youngsters and adults were enjoying when we visited. (Aside from the outside trains, this is the only part of the museum that young children would enjoy.)

Exhibits emphasize the locomotives and equipment that helped to make Conneaut a significant part of railroad transportation in the state of OH. 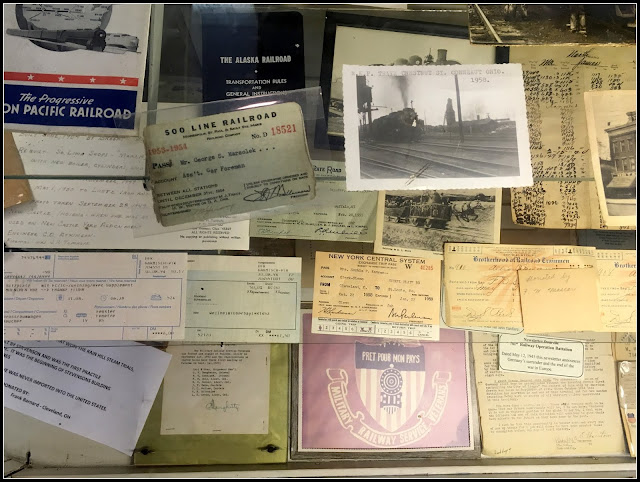 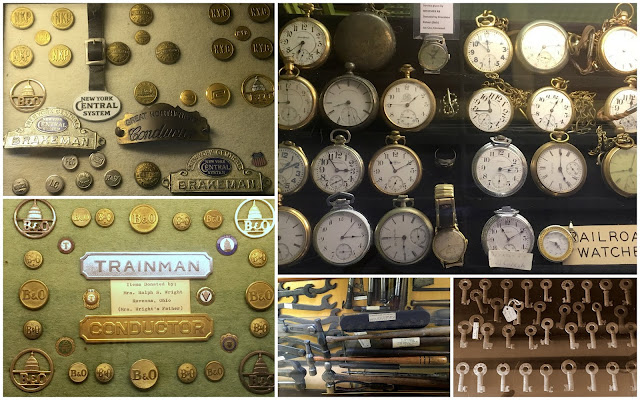 An interesting display was an 1857 free railroad travel permit issued to the chief attorney for the Illinois Central Railroad, Abraham Lincoln before he became a U.S. president. 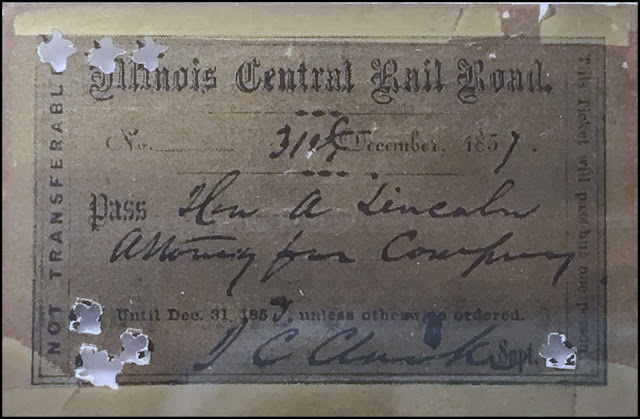 There are relics from the 1876 Astabula Bridge Disaster, a derailment caused by the failure of a bridge over the Ashtabula River some 1,000 feet from the railroad station at Ashtabula, in far northeastern OH. On the evening of Dec 29,1876, the bridge collapsed and plunged two locomotives hauling 11 railcars of the Lake Shore and Michigan Southern Railway and and 159 passengers into the river in deep snow. Heated by stoves, the wooden cars were set on fire. The accident killed 92 people and was the worst U.S. rail disaster until the Great Train Wreck of 1918.

Located on the museum grounds is its premier display, a Nickel Plate Road 2-8-4 No. 755. The engine is on display with a hopper car and caboose from the Bessemer & Lake Erie Railroad. Visitors can climb aboard the steam engine and see the controls from an enclosed display complete with a (very quiet) engineer. 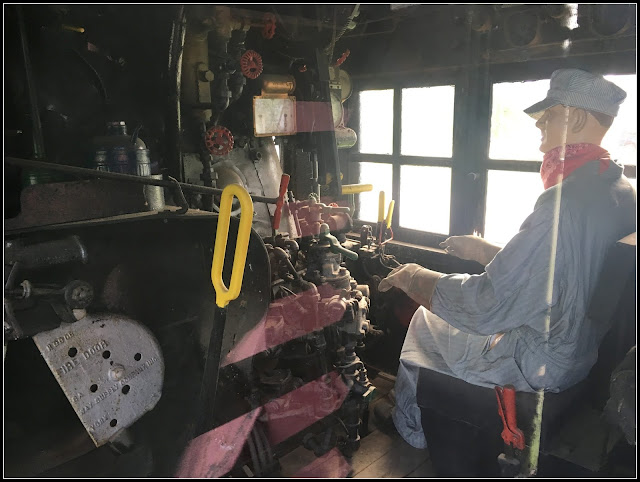 There's a stairway that visitors can use to access the caboose interior. 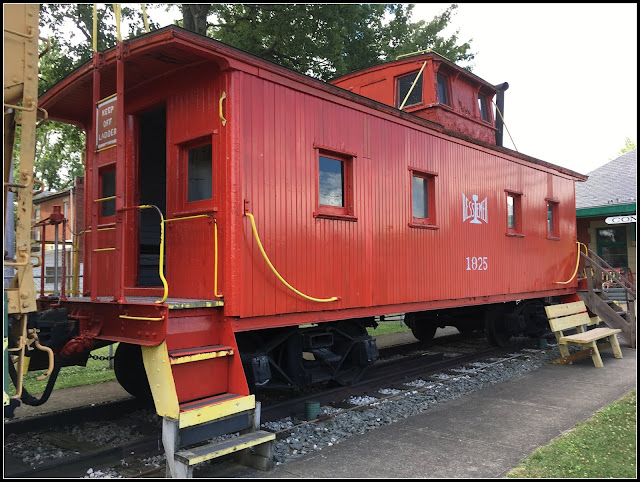 Nickel Plate Road no. 755 is a 2-8-4 Berkshire type steam locomotive built in 1944 by the Lima Locomotive Works in Lima, Ohio. Classified as a "S-2" class Berkshire, the locomotive operated fast, heavy freight and passenger trains until its retirement in 1958. The Berkshire locomotive was named after its testing location on the Berkshire Hills of the Boston & Albany Railroad. 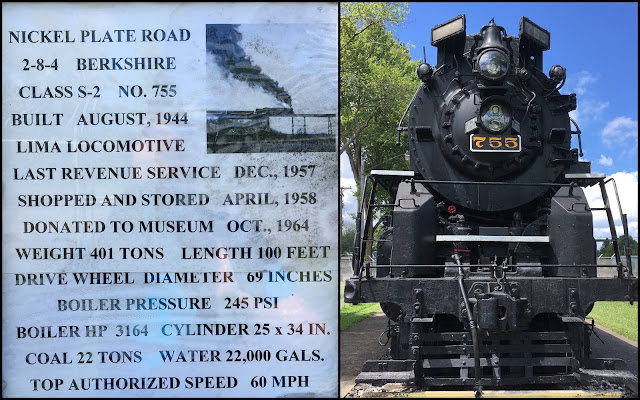 The New York, Chicago and St. Louis Railroad (abbreviated NYC&St.L) operated in the mid-central U. S and was commonly referred to as the Nickel Plate Road. Its widely accepted that the term "Nickel Plate" was first used in a March 1981 article in the Chronicle of Norwalk, OH. The paper reported the arrival of a party of engineers to make a survey for the "great New York and St. Louis double track, nickel plated railroad."
If you happen to be travel through Ohio and are looking for a local RR museum (or not) this is a great one to see. It’s located between Broad and Mill St on, where else, Depot St. in Conneaut, OH, and open from Memorial Day to Labor Day. Be sure to bring your curiosity and a donation.

Since you're in town, stop at the White Turkey Drive on E. Main Street In for a turkey sandwich and cold root beer.
Posted by Beatrice P. Boyd at 7:00 AM

You are sure seeing and visiting some interesting places, some unexpected!

My husband would have loved it there... he was a railway buff. The display of watches is lovely and I particularly noticed the little 'bottle' at the front. Least-ways, I thought it was a bottle until I looked closer.,

I've never been on a train!!

I would love to visit this one. great find...

I live in Van Wert Ohio, Ohio is a beautiful and interesting place. US 127 runs North and South through our town, this is where the Huge Garage sales happen in August; they run from Michigan to Georgia along the highway. This year they go from Aug 2-5. Maybe you could hit a few. I enjoy yours post, thank you. There's a lot of info on the net "127 Garage Sale". If you go through Van Wert, look at our Main Street, and don't miss the Brumback Library, it's the first county library in the US and the building is beautiful.

Grenville is my kind of man.. love those trains, always have, always will.

My father would have loved this museum. He loved anything to do with trains. Perhaps because his father was a railroad worker. If you two are taking I-80 make sure you stop at the largest truck stop in the world soon after you get into Iowa. Besides all the little shops you can get a good meal.

Also if you are going into Toledo they have a good zoo. The ballfield for the Nud Hem=ns is there too.

What a great find, such an interesting museum. Gerard would have really loved that stop.

Well worth making the visit!

How fun to find this waiting for you as a surprise place to visit. Sounds like an interesting place.