We're currently on a cross country road trip from New Hampshire to Oregon and posting about sites along the way. This post is about a stop in Bennington, VT.


Admittedly, we didn't know much about Robert Lee Frost (1874-1963) before we stopped in Bennington, VT, the first stop on our cross country trip. We went looking for "local" highlights." Frost was quite the celebrity in this area and the poet laureate of Vermont (1961).

Frost is an American icon in the field of poetry. He's credited with being the poet who (just about) single-handedly romanticized the New England landscape by writing about nature and subjects connected with farming.

He wasn't a native New Englander, but was born across the country in CA. Surprisingly, he later said he wasn’t a successful farmer but that he found it easier to write when farming.

He was established in England, before his work was published in the U.S. Later, he lived in NH and VT.

After learning that Frost was buried in Bennington (of course) we searched for the site. It wasn't hard to find in this small town and is in the Old Bennington Cemetery next to the Old First Congregational Church which we visited just after Sunday services. The minister and some congregation members were happy to tell us about the church (photos below).

Back to Frost who never lived in Bennington. So why is be buried there?

It's because of his wife, Elinor, who died in 1938. She had asked that her ashes be spread on a Derry NH farm. Frost went there, found the place in disrepair and wanted a more "suitable" location. Elinor and Robert were not only high school sweethearts but co-valedictorians at their 1882 graduation. They pledged to marry after high school, but didn't so until 1895 as Elinor held off until she graduated college. Robert wanted to go to Harvard but his grandparents with whom he lived termed it too much free-drinking. He enrolled at Dartmouth but later dropped out. They had 6 children, several died before both parents.

After that digression, it's back to the burial. Dissatisfied with Elinor's choice, Frost waited until a plot was available at the Old First Church near where he was living in Shaftsbury, VT and in 1940 purchased two burial sites.

It's fairly easy to locate the site as the cemetery is well-kept with signs to direct visitors. 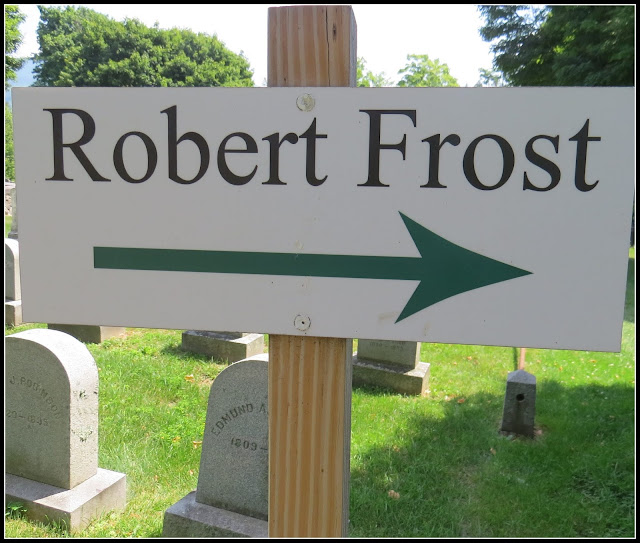 There's three gray granite monuments for Frost, his wife, and several family members. There's a small birch tree grouping by the grave sites a reference to "Birches" one of his most famous poems as well as a poem about appropriately enough, a graveyard. 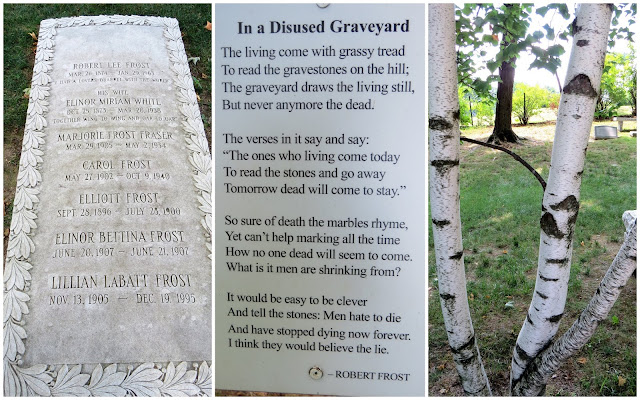 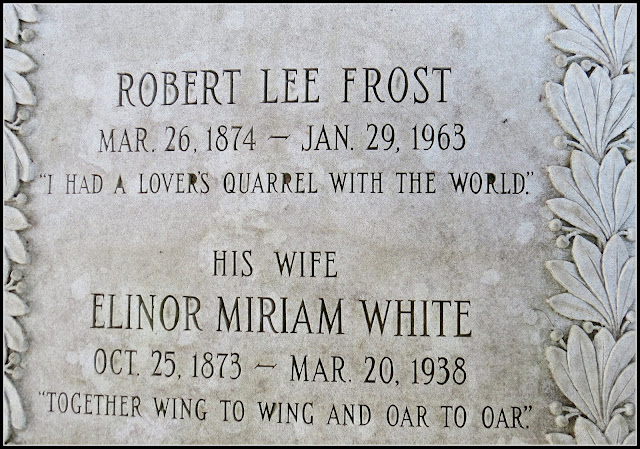 For undetermined reasons, people often leave coins and other objects at prominent grave sites which made it necessary for the church to post this sign. 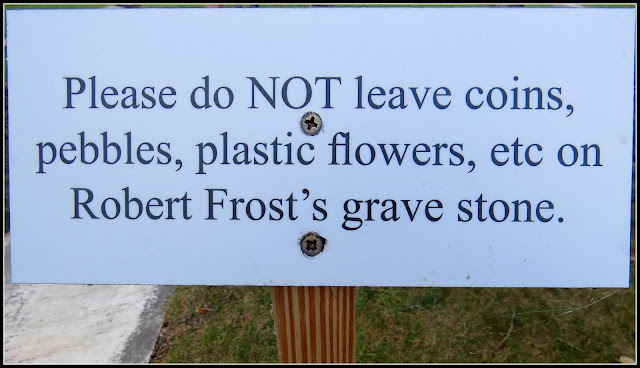 The grave site is located directly behind the Old First Congregational Church. Finding it was the goal, but seeing the church which dates to 1805 and its interior was even better. All we met and spoke to were willing to share information on its history. 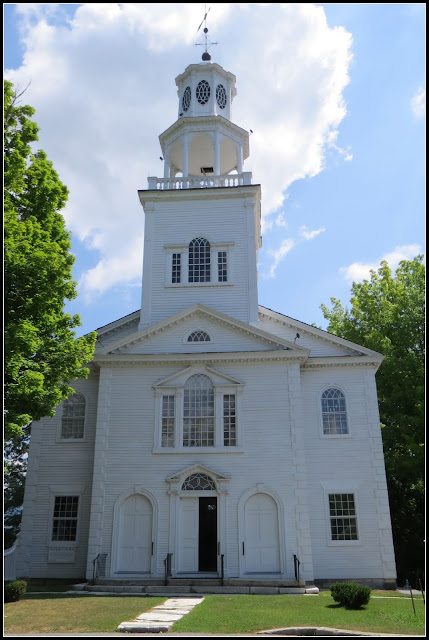 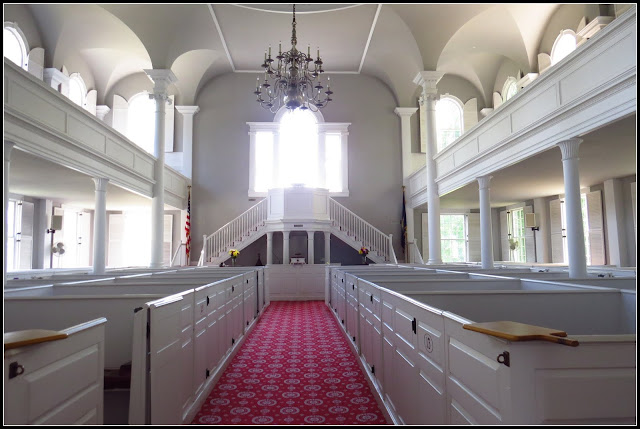 The church is a well-preserved example of simple New England style. The church columns, which are hand-planed from the whole trunk of pine trees, extend from the basement footers to the rafters. The upper pews or Free Gallery provided seating for visitors and young people; boys were seated on the left and girls on the right. (We're unsure if this practice is still followed today.) 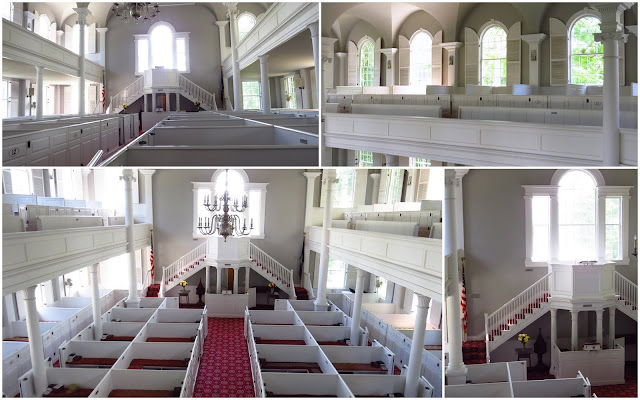 As noted above Frost never lived in Bennington, but several miles away in Shaftsbury, VT, in a farmhouse called the Stone House. He bought the house, built in 1769, with plans of being an apple farmer and there was once a large orchard on the grounds. He won the first of four Pulitzer Prizes during the years he lived there.

Bennington College acquired the house in 1917 and began renovations, opening it as a museum in May 2018. There isn’t much to actually see in the house as only 2 rooms on the first floor are open currently with a notice that the second floor is being renovated. 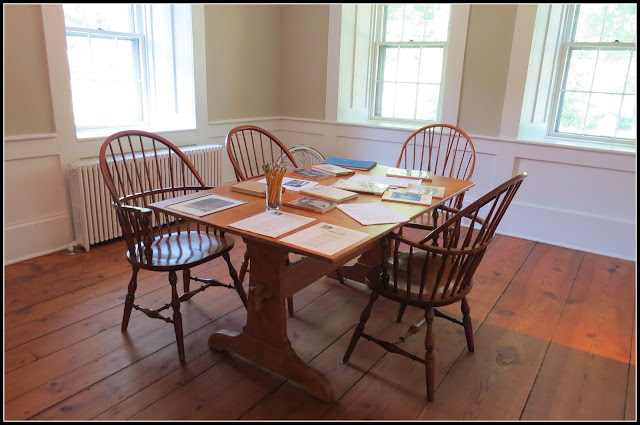 The major attraction in the house is this dining room is where Frost wrote one of his best-known poems “Stopping by Woods on a Snowy Evening” on a hot June day in 1922. The poem tells of a man traveling through snowy woods on the darkest evening of the year. He's on his way back to town, but can't quite leave the lovely and dark woods. It famously ends with the repetition of the line “And miles to go before I sleep.” 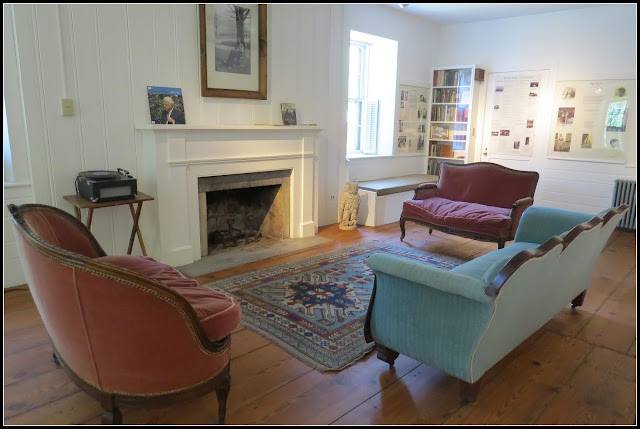 In the sitting room, walls are covered with large displays of reading material about the life of Frost and his family with information on his poetry. You can see a few of these panels on the right side of this photo. We read many, but I didn't take photos as they would not have been interesting to read here.
Posted by Beatrice P. Boyd at 7:00 AM

beautiful old architecture and Wow and wow again on the inside to the church. I love it

Oh my gosh... My daughter was married in Old First Church back in 1989. My husband and I... well, I think I will just do a blog post on that rather than tell the story here. Look for it on my Memory Monday post next. And, where are you headed to in Oregon. My granddaughter and grandson-in-law have a food truck in Bend. It's called The Tin Pig. If you get to that town you should look them up for some very yummy food (all local grown ingredients) Jack is an excellent chef and his wife an award winning dessert queen. Best wishes on your travels.

This is the kind of thing I like to see while traveling. I know this vacation is going to be interesting.

I am so excited to come along with you on your trip! I love going to old and famous places. This is definitely somewhere I would stop. Thank you so much for all the pictures and information about one of my favorite poets. Where are we going next?

Your trip has certainly started with a most interesting event. I am learning so much along with you. Thanks for sharing.

Lovely stone house! The dining room with its arched four chairs - is indeed an attraction.

Already I have learnt so much what a great adventure you are on.

You haven't gotten far. It could be a very long trip. :)

The grave is a fitting one for him, and wow, what a church!

Robert Frost is one of my favorite poets.

I love Frost's poems, I work in Plymouth NH where he taught English so there are statues to him on campus.
Cathy

Looks like a great start to your journey. I think it is fascinating about Robert Frost being buried in Bennington. His farm is a state park in Derry, NH and I think you can visit it. I don't know the whole story behind it though. Drive safe as you go west. Hugs-Erika

Such a pretty church! Lots to see at this stop. Sounds like you found many places to explore.