We're currently on a cross country road trip from New Hampshire to Oregon and posting about sites along the way. This post is about a stop in Toledo, OH.

Free is good and when you can see masterpieces of art and sculpture it's even better!

That said, if you're ever in Toledo, Ohio, be sure to visit the the Toledo Museum of Art. This internationally known art museum is located in the Old West End (OWE) neighborhood and houses a collection of more than 30,000 objects. The museum has major collections of glass art and of 19th- and 20th-century European and American art, as well as small collections of Renaissance, Greek, Roman and Japanese art.

Since you'll be in the neighborhood, be sure to drive around the side streets because the OWE area is truly one-of-a kind. It consists of 25 city blocks that comprise one of the largest collections of late Victorian houses remaining in the U.S. Houses styles include Colonial, Georgian, Italian Renaissance, Queen Ann, Dutch Colonial, French Second Empire and Arts and Crafts.

After the museum visit, we spent time driving up and down some streets in the OWE area. There were a lot of oohs and aahs from both Grenville and myself. Every time we saw a magnificent and large home, an even more impressive one would be on the opposite side. Being former owners of an older (but much smaller home) we know much upkeep is required for these vintage homes.

The Toledo Museum of Art was founded in 1901 by Edward Drummond Libbey, who started the Libbey Glass Company in 1888 in Toledo where the company is still located. The museum relocated to its current location on Monroe Street in 1912. The main building was expanded in the 1920s and 1930s. Other buildings were added in the 1990s and 2006.

The Peristyle, a 1,750-seat concert hall in the east wing, is the principal concert space for the Toledo Symphony Orchestra. Added in 1933, it was designed in classical style to match the museum's exterior.
The name means "an area surrounded by columns" and its unique architectural feature is a curving row of 28 Ionic columns that surround the main seating area arranged in tiers similar to ancient Greece theaters. 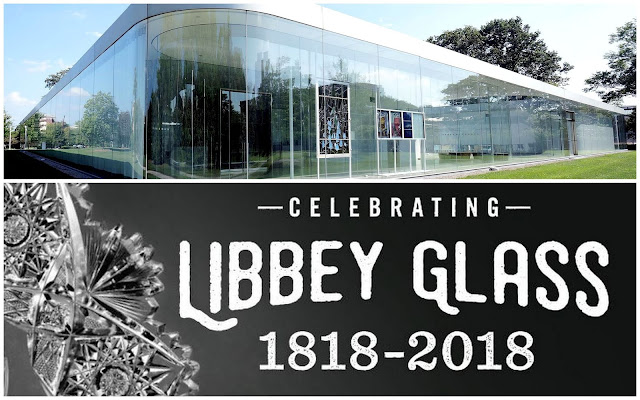 The museums's most unique building is the Glass Pavilion which opened in 2006. The exterior and many of the pavilion's interior walls are made entirely of glass. The roof and interior structural supports are made of steel. Each of the more than 360 panels, many curved, that make up the glass walls measures about 8 feet wide by 13-1/2 feet high and weighs 1,300 to 1,500 pounds. The curved glass walls were imported from China.

Celebrating Libbey Glass 1818-2018 was the main exhibit during our visit to mark the company's 200th anniversary.
Posted by Beatrice P. Boyd at 7:00 AM

that is amazing, a sight to behold for sure,

I want to see those houses and that glass place would be for me... love glass and old houses. the house I would pick from the collage is the 3rd in on top row. love that porch

What a delight to see some of those homes, stunning.

Toledo is a great city with very interesting things to see. Loved the homes and the theater as well. You are surely finding treasures on your trip.

I totally agree with the title of your post.
Free and outdoor art is my preferable kind of sightseeing. In your visit to Toledo - the unique houses that you've encountered on the side streets of the town, are surely worth the time.

Wish I had had that neighborhood to take my kids to back when I was teaching into to architecture!
Great houses!

Toledo has so many sights to see. You picked a couple of good ones.

Some marvelous architecture there!

Lots of interesting things to see there. Great post.

Lots to see on your journeys. That glass pavilion is amazing.

You've hd some fascinating stops along the way. Enjoying it all. Safe travels. Hugs-Erika

Yes, the Toledo Museum of Art is a really neat place to visit. The Peristyle is wonderful too. My son was in the Toledo Youth Orchestra when we was younger and played there with his group several times. (He plays the upright bass). Sounds like you had a nice time in Toledo.