Cave of the Winds

It's where the expression, soaking up the experience takes on a whole new meaning — a VERY wet meaning. 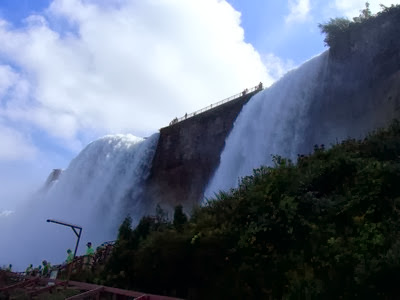 And, you also put on rubber sandals and a bright yellow souvenir poncho, walk town a series of wooded boardwalks AND have one of the most unbelievable experiences ever — getting WET.

IF you are visiting Niagara Falls (and on land) you are at the Cave of the Winds and start the journey begins an elevator ride 175 feet down into the Niagara Gorge. Then, geared up, you follow a series of wooden walkways along Niagara River to the "Hurricane Deck' where the rushing torrents from the Bridal Veil Falls creates tropical storm-like conditions with winds up to 68 mph. Rainbows are usually visible day and night. 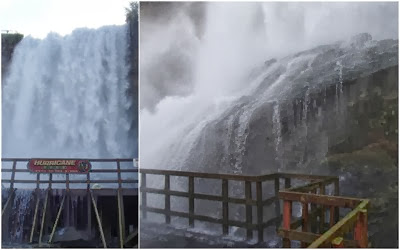 The Cave of the Winds was an overhanging ledge at the top portion of the gorge where the waters of the Bridal Veil Falls flowed over. Due to this rock overhang, a cavern formed behind the cascading water. The cavern was discovered in 1834 by Joseph W. Ingraham, who had spotted the cave from above the gorge. The first two people to walk behind the Bridal Veil Falls into this cavern (Barry Hill White and George Sims) named it "Aeolus' Cave" after the Greek god of winds. Later, it was renamed Cave of the Winds. 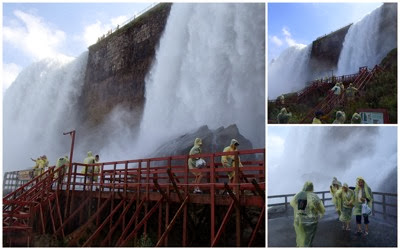 Until a staircase opened in 1829, sole access into the gorge was using a ladder or a rope. By 1879, the Cave of the Winds was so popular that $1 was charged to visit it.The first accident there was in 1857 when a rock fall near the cave sent rocks falling onto tourists at the base of the gorge causing several fractures.The second accident was in 1920 when rock fell from the ceiling of the cavern, killing three people and injuring several others. 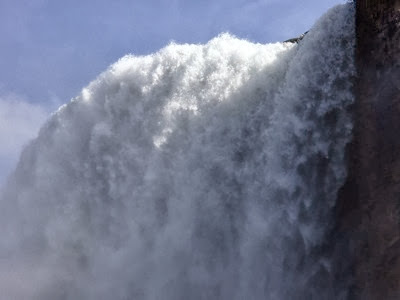 In 1925, elevators were installed to provide transportation from above the gorge to the bottom of the cave. Due to water erosion, engineers determined that the cave entrance was too dangerous; the ledge which had blocked the water was at risk of collapsing. In 1955, the cave was destroyed by a controlled dynamite blast.

The elevator takes visitors down to the level of the Niagara River at the base of the American Falls. Visitors then walk over a series of wooden red decks and platforms to the base of the Bridal Veil Falls with water crashing down and flowing beneath the decking. 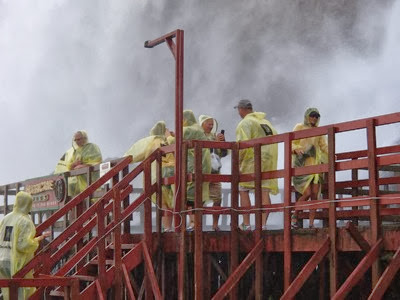 The decking is removed each fall due to the potential damage caused by ice buildup at the falls, then re-installed each spring by park officials. And, FYI, the decking is not secured to the rocks below by bolts or other construction materials; the wood beam supports are just wedged into the rock crevices. 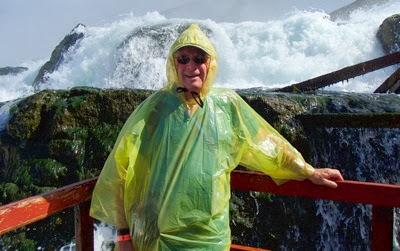 Yes, we BOTH got VERY wet too!

Oh yes one of our very favorite places in the country...magnificent photos you have here.

I have been at the top

It's a long time since we were there but the memory is still very strong in my mind. What an experience!! Joan

I have always wanted to visit the falls. Maybe one day! Beautiful!

Thanks for being so brave to walk on that decking to capture those amamzing shots. After reading the decking is not bolted, I dont think I would have been so brave. I was wondering about how well that wood holds up but thankfully you cleared that up and its replaced each spring. Still........ the sound of it just being wedged is scary. Sad they had to close the cave, I wonder what it looked like on the inside and how large it was.

It has been so many years since I visited. Thanks for sharing your pics.

i have been and it's so invigirating!! your pictures are so beautiful, they will be a constant reminder of your visit to this most amazing place!!

I've never been, but would love to see it. I don't know about that "wedging" business though...that's a bit worrisome!

Sounds pretty amazing. I'd prob'ly not want to actually visit it though. I'm such a chicken.

Oh my I have done that. It was back in the 70's with my late wife and I was oh so young. Your photos bring back happy and sad memories and I am so glad to see them.

You have certainly brought back memories. I was there in 1955 !! I love the pictures.

Nice to have made you recall a what we hoped was a fun trip, Ginnie.

Sometimes photos have the power to do that, Larry.

Tammy, I didn't!t find any photos online when gathering info on Cave of the Wind, and I was wondering also about that cave.

And it!s a good thing I didn't!t learn about the wedging until AFTER visiting !

It's a beautiful place and a once in a lifetime experience. You got some great shots!

Wonderful pictures of Cave of the Winds and great documentary too.

Despite many visits to The Falls, we have never done this. Not sure why. Maybe we never wanted to get too wet while having to travel some distance to get home.