What's Up in Nashua?

There's been quite a lot happening here in recent months both at the mill apartment building as well as a major undertaking in the downtown area on Main St. with high-reaching projects. 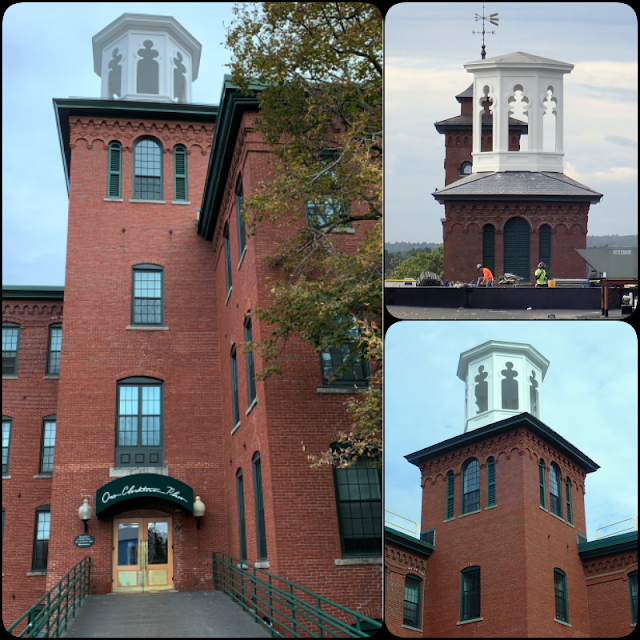 Renovations were completed to the cupola (also called the bell tower) atop the mill building at Clocktower Place Apartments, the mill building where we reside (only apartments, no condos). The above photos show the completed work which involved replacing wood and repainting. Originally, a building's cupola was functional and could be used to ventilate and provide natural light for the structure below. It also served could enclose a bell; this one formerly housed a bell (shown below). 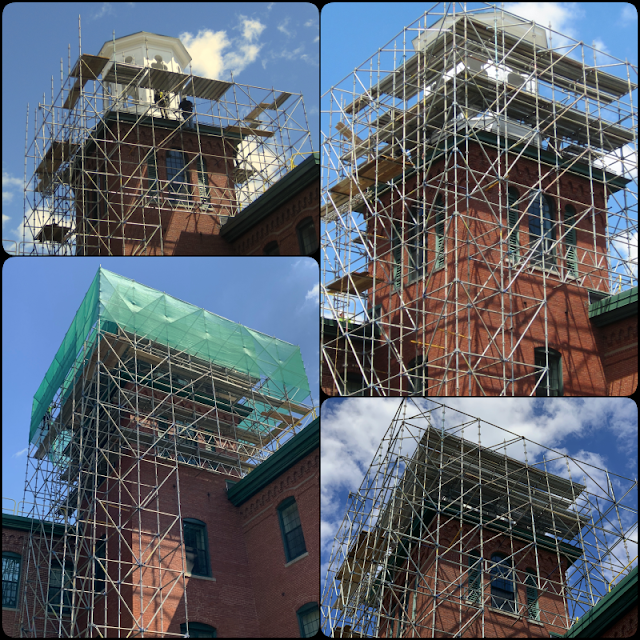 This scaffolding was erected around the mill tower for many months during 2021. Workers didn't climb it to reach the top, but entered the rooftop work area from inside the building. 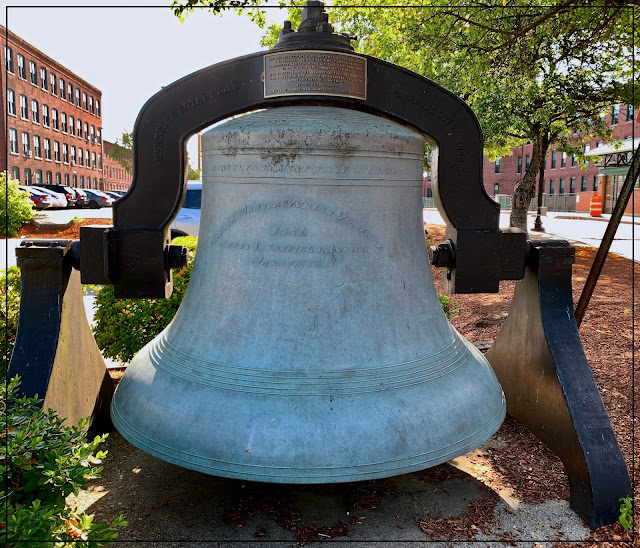 Many years ago, this bell was housed in the cupola and would be rung to summon millworkers. It was removed years ago and now resides in a separate area on the grounds and there are no plans to re-insert it in the repaired cupola. I don't know the exact reason for its removal which was done long ago, possibly when the mill buildings were renovated for other uses before their conversion to residential housing. 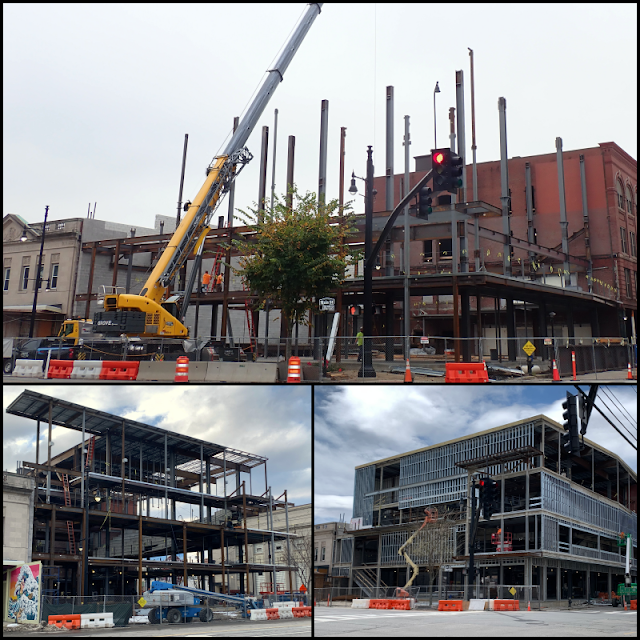 Work has been moving along on a performing arts center in downtown Nashua. It's located on the site of a former shoe store, which relocated to a new and larger location outside the city. 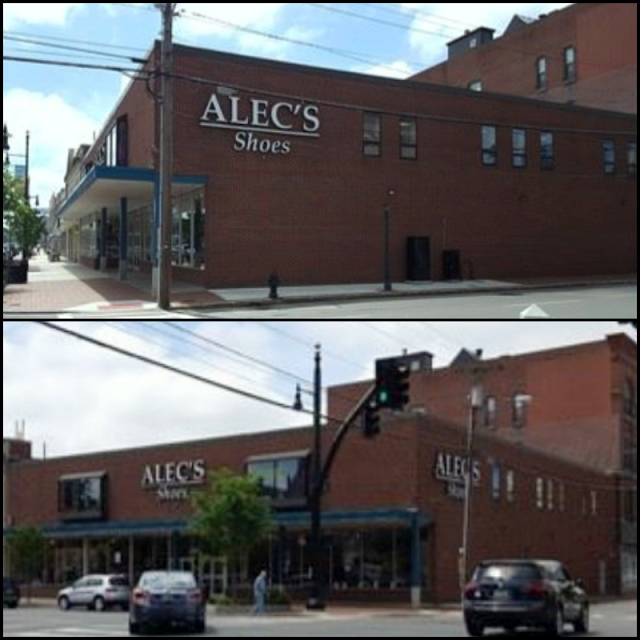 This popular 1960s shoe store was demolished to its foundations which were reconstructed to house the audience chamber, stage, and front of house functions. The exterior of an adjacent 1924 brick apartment building was retained and the redesigned interior will house additional lobby space and other functions. 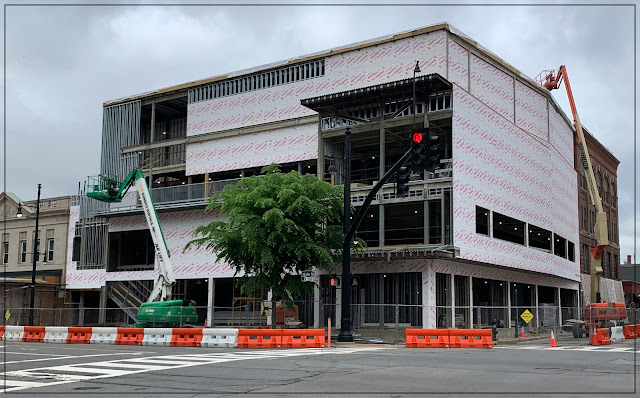 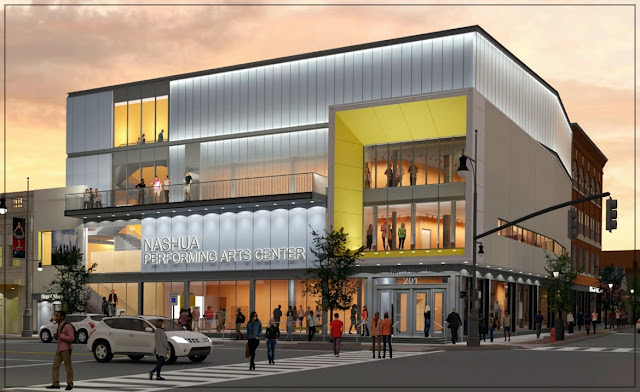 This is an earlier architectural rendering of how the project is expected to look on completion. Here, the name is shown as Nashua Performing Arts Center, but the official name will be the Nashua Center for the Arts.
That's because in late 2021, the Nashua Community Arts board announced that a local family had contributed an anonymous $1 million gift towards the $25 million project. It was given final naming rights as a result of that donation.
The use of the word anonymous seemed puzzling at first since if you remain anonymous when you do something, you don't let others know. Don't misunderstand, this was a generous and wonderful donation plus the selected name seems more appropriate. In this case, as in others, the use of the word meant that those responsible didn't want their name shared publicly.
To follow up on a fellow blogger's comment that this looks to be an impressive center for a fairly small city. That's true considering that Nashua's population is under 100,000. But it's also the second largest city in the state of NH at just under 90,000. Manchester is the largest with a population of 112,600 and Concord is third with 43,500.
There's been a lot more going on around Nashua including some new wall murals. A future post will include photos of both older and newer ones.
Posted by Beatrice P. Boyd at 7:00 AM

Do those renovations to the building increase your condo fees?

Will the bell go back in the cupola?

It will be fun to have an arts center so close by. That is one thing I miss living in the wilds of NH. What are they fixing in the cuppola of your building? Hopefully you'll show photos of both projects completed. Happy Wednesday! hugs-Erika

Marcia, the bell was removed years ago possibly when the mill buildings underwent renovations for other uses before being converted into residential housing. There are no plans to put it back in the tower.

Erika, yes it will be great to have the arts center downtown and within walking distance for us. The repairs to the cupola were to replace wood that had been deteriorating over the years. The work has been completed as shown in the photos with the scaffolding taken down.

David, the mill is strictly rental apartments and not a condo residence.

There's also a lot going on in my neck of the woods: work on the road to make room for more cars, demolishing of old houses,new buildings and towers etc.. I must admit I'm not happy with all this, and I'm sure I won't like the results.
Wherever I go to visit adjacent towns, things look worse than in the past, before the changes. Hopefully, this won"t be the case in Nashua.

Lots going on there in Nashua these days. It's interesting to watch the changes.

I love the new art center, it will be beautiful. that is one big bell, don't blame them for not putting it back. they are doing a great job using the old and making it work and work well.. our town is changing so fast we can't keep up, tear down build back is in full gear here

The bell is a neat thing that all can see close up now. It’s good news that the shoe store is still in business elsewhere. Those family businesses are a dying breed.

Looks as if a lot of things are going on in your community. There are a number of bells sitting out on the lawns of buildings around here. I wish that they could be back in the steeple; however, sometimes the steeple is gone. Happy summer to you!

It's good to see the historic bell has been placed near to the former mill apartments. As for the Performing Arts, I'm pleased that new theatres are being constructed for future generations. One of our grandsons has chosen performing arts as a profession. He's in London specialising in theatre lighting, but also gets to tour around the UK now that theatres are open to the public once more.

It is inconvenient to undergo building construction, but it is worth it when it is completed. Enjoy the results. Gigi hawaii

I think the bell tower is beautiful and it definitely deserved to be renovated and preserved. However, I wouldn't want to be one of the workers because I'm afraid of heights. I'm glad they could access the tower from inside the building.

It's also nice that the bell was saved and displayed where everyone can see it. It looks heavy - - and reminds me of the Liberty Bell.

Beatrice, Love the cupola/bell tower on your building! Adds real interest to a building that already attracts lots of attention. Great that someone saved the old bell too... The new performing arts center will be great for Nashua, and really handy for you! Funny that you mentioned Bryson City in your comments on my blog site. My next post will included a few photos from Bryson City. Take Care, Big Daddy Dave

So much construction. The bell tower is beautiful. I hope they don't change it.

Goodness me ... there has been a lot happening in Nashua, thanks for your photographs, the new art centre looks very good.

That's a very impressive bell. The arts centre is going to look lovely.

That was very interesting. I love that you live in the center of all the excitement! I don't think we ever visited Nashua when we lived in NH. We may have driven through, but I don't think so. We used to fly into Manchester Airport when we'd go visit our kids, and then we switched to the Portland, ME airport, and then to the Portsmouth NH airport...all because of flying different airlines. So we got to see different parts of the state and also southern Maine that way. All interesting towns and cities. I love New Hampshire and Maine. Maybe we'll go back someday...if our grandson ever settles back down there! This was good, and I enjoyed hearing about it all, especially the bell and the cupola.

I haven't been in Nashua in forever, but it looks like a fun place for a weekend and the performing arts center looks terrific.

Certainly a lot of building construction there.

Bells like that are heavy, so not putting it back may have allowed a much lighter (and cheaper) reconstruction of the cupola. That's a fine arts centre, whatever they choose to call it and I'm sure will be a great asset to the town.

Now lots of people can see the bell up close.

It's always interesting to see building, especially public or community buildings and it looks like you have quite a lot of that going on. It's fun to be able to see it -- so long as it isn't too loud!

How nice that you will get a performance arts center. It does look very good - not long that it will open. Will there be a special performance for the opening?

I really like the cupola. The designed it authentically and it looks great. I saw new construction today along a highway where a new road had been put in. It is required to fill all the areas up with gas stations and food joints.