Does this look like a giant-sized game ?
Wood (would) you pass or stay behind this truckload (couldn't resist that bad pun). 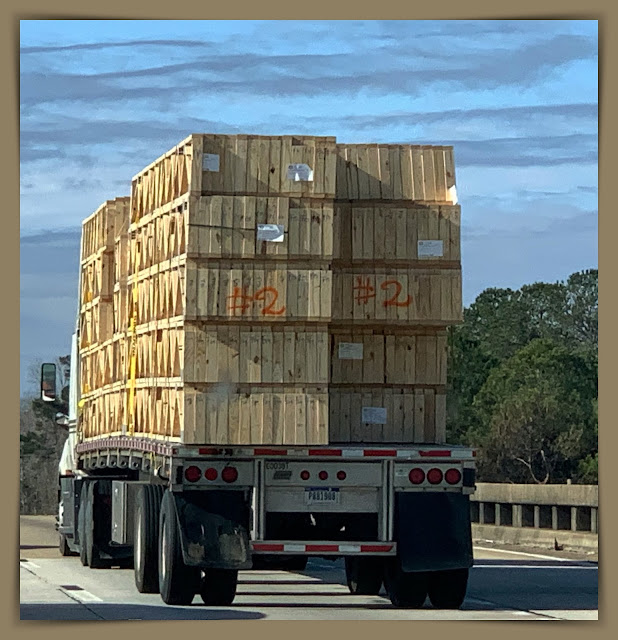 Grenville passed safely ASAP. While we were not certain, the stacked wood looked like wooden trusses. Yes, they were secured on the sides, but why take chances. It reminded us (and maybe you too) of the toppling wood block game known as Jenga®.
This popular game was invented by Leslie Scott, a British board game designer and author. She launched it at the London Toy Fair in 1983 and it was introduced to the public at the London department store Harrod's. Jenga® was launched in North America in 1986 and has become an international family staple, with about 50 million units sold worldwide each year.
Born in East Africa, Scott grew up fluent in English and Swahili. Jenga® evolved from a stacking game her family played in the early 1970s with wooden blocks purchased from a Ghana sawmill. In England, Scott began trademarked the name “Jenga,” a form of the Swahili word kujenga, which means to build.
Traditionally, Jenga is played with 54 wooden blocks stacked into a tower. Success requires balance, patience, and manual dexterity. The blocks are made with subtle variations to add randomness and heighten the challenge. Players remove any block on their turn, placing it on top to heighten the tower without knocking it over.
The game ends when any portion of the tower collapses, caused by either the removal of a block or its new placement. The last player to complete a turn before the collapse is the winner. The game is simple, easy to understand, and usually results in a rematch.
Enjoy Your Weekend, Everyone
Temps climbing to the 90s, first time in weeks
Good weather to stay indoors and play a game
Blogger friends, while I check comments daily and delete obvious spam, I had neglected to check for spam under Comments which is where some comments had gone. After checking further, I found there were a number of many valid blogger comments marked as spam. These now have been  marked to publish; my apologies for this oversight in not checking sooner. Thanks, David G. and others  for the heads-up.
Posted by Beatrice P. Boyd at 7:00 AM

The greater the distance between me and him the better.

I would pass it.

I would pass it, too, at the earliest opportunity.

Fun game! Reminds me of fiddle sticks or building a house of cards. Gigi hawaii

Good thing you were able to safely pass the truck. That stack does not look secure, even though it probably was.

I cringed just trying to decide if I would pass or not pass. maybe pull off in a rest stop and let it go ahead.

I don't play Jenga very well...not patient enough, with the other players I think.

It would be extremely unnerving to be stuck behind that truck. I'd do my best to pass him.

Here in TN I have often been trapped behind logging trucks - on dangerous, narrow mountain roads where passing isn't allowed. It is absolute TORTURE.

I love jenga, but I would pass that truck. It looks like it could be a disaster in the making.

I think you could pull out that one near the bottom left. Just a suggestion.

We were passed by a truckload of man made house joists today. It wasn't that tall. That could be scary not knowing how the tied all of them together to ship them. It does look like the game.

I think my comments are going to spam, Beatrice.

I remember playing that game at social gatherings. Also Spillikin which was a similar party game. Making a tower with playing cards to see how many could be used before it collapsed was great fun too. I wouldn't want to be driving behind that lorry with the heavy load!

I was thinking of Jenga as soon as I saw it! I'd hate to be behind them if they came undone!

No worries on the spam comments Dorothy. I only learned about this myself thanks to Anni, who had left a comment telling me about this problem. I have to check my spam folders every day and there's always one or two in there, more if I forget a few days.

Never actually played Jenga. I would not want to be driving behind that truck, regardless--lol! ;)

If I were driving behind that truck, I think it would send a shiver down my lumber regions.

I've never come across Jenga, which is surprising as it was first launched in London in 1983. Looks like it would be fun.

I was introduced to Jenga in the late 80s when I spent my vacation in the Cotswolds in England. The young crowd in a pub - all around my age back then - invited me to join them for a game at their table. After that we met at the pub every night for our Jenga game (and a pint of beer or two).

Good thing you were able to safely pass the truck.

I've never played that game. As for the truck, I'd pass asap.