This post is not the jukebox musical comedy film, Rock of Ages (2012) or the earlier Broadway play. Sorry if that disappoints anyone. 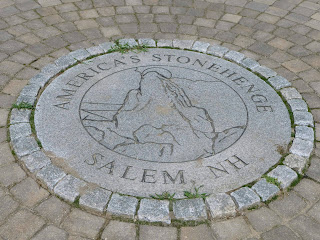 Wait, this post is about actual and very large rocks right here in New England in what's considered to be North America’s most enigmatic megalithic structures. A megalith is defined as a large pre-historic stone used to construct a structure or monument, either alone or with other stones.

Fall is the perfect time of year for unexplained mysteries. So, we took a day trip to the former Mystery Hill, renamed America's Stonehenge in the 1960s. There's so many stories, online and in print about this place, which we've never visited, but we did last week.

After a lot of reading, the site's former name seems more appropriate since this archaeological site is clouded by the mystery of its origins with many questions leading archeologists, scientists, historians and sightseers to speculate about its origins. Some claim that it’s over 4000 years old, making it the oldest man-made construction in the U.S.


It's a place of low, rambling walls, oversize rock formations, cave-like formations, tunnels and stone walls scattered in a wooded 30 acres on a granite hilltop in Salem, NH (not the town noted with the 1692 Salem witch trials, that Salem is in MA).
True, it's named after Stonehenge, that well-known mysterious formation on England's Salisbury Plain, but the sites are quite different looking. Stonehenge is located on a plain, not a hill, and is arranged as a series of concentric circles, horseshoes and squares. By comparison, Mystery Hill is jumbled. The stones that comprise the UK Stonehenge weigh up to 45 tons. The Mystery Hill stones are smaller with the largest about 11 tons and the construction less intricate. There’s no cultural or historical connection, except that both are made of stone. That said, they share some common ground:
Anthropologists and archaeologists believe that America's Stonehenge was the former homestead of shoemaker Jonathan Pattee, who settled there in the mid-1800s and built a house. Several intact caves are thought to have been used by for storage purposes.  A printed mention of the site appeared in the 1907 History of Salem, NH, by Edgar Gilbert, under the title of Pattee's Cave.

Goodwin, a wealthy insurance executive and antiquarian (someone who likes things of the past) purchased the area in 1937 (there was information provided on a former owner).

The site was altered on many occasions by Goodwin who wanted to prove that Irish monks (the Culdees) lived there long before Christopher Columbus arrived in America. The site has been altered by stone quarrying. Many stones contain drill marks from on-site quarrying. Also, Goodwin and others moved stones to where they considered were original locations and Goodwin is considered responsible for shaping the rocks as seen today.

Goodwin named the site, Mystery Hill which remained its "official" name until 1982 when it was renamed after an early 1960s news article, dubbed it America’s Stonehenge. By that time, it was owned by Robert Stone (appropriately named). The new name was seen as a way to reinforce promoting it as an archaeological site as opposed to a roadside novelty. People visit for both reasons. 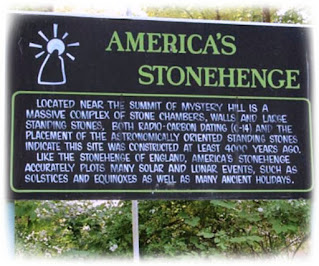 Stone bought the 105-acre property in 1965 after leasing the site since 1958, when admission was being charged to see the monoliths. It's believed the purchase saved the site from development. Stone died in 2009; the site is owned by his son, Dennis, a former commercial airline pilot, and president of America’s Stonehenge.

The visitor's center contains artifacts found on-site including stone tools, pottery, 18th and 19th century housewares leading some scientists to conclude that the stones were assembled for a variety of reasons by local farmers in the 18th and 19th centuries. Manacles were also found, and may have been removed from slaves who used the site as a stop on the Underground Railroad in the 1830s and 1840s. Charcoal from a fire pit was radiocarbon-dated to be 4,000 years old. Scientists say the research proves only that there was a fire and none of the dates are linked to human activity.

There's the mystery of a Sacrificial Table (named by Goodwin). It resembles an altar and is a highlight of the site. This gigantic flat stone table is supported by four stone legs with a groove along the surface edge leading to a spout. The gutter could have been used to collect rainwater or to drain the blood of a sacrificial animal. Another design oddity is a tube, about 8-feet long below the stone that leads to an underground chamber. Anyone in the chamber could have spoken through the tube and be heard above ground.

Aside from the speculations of an altar, others contend it resembles a lye-leaching stone found on old farms. These stones were used to extract lye from wood ashes, the first step in soap making. Also, the Sacrificial Stone doesn't conform to any known Colonial religious beliefs and New England Native Americans didn't build with stone.

This curious place was worth visiting, even with muddled origins, open to archeological speculation — was it by a built by Native Americans, the creation of ancient Middle Europeans, the lost monastery of migrant Irish monks, a settlement, village, type of cathedral or the work of 18th and 19th century farmers — many questions, few answers.

No one is 100% certain and speculation continues. What is certain is that people will continue trying to solve the mysteries of America's Stonehenge. With no definitive answers, you can visit and decide after paying an entry fee (used for maintenance and research), then wander the site, and let your imagination run wild. When finished, walk the astronomical trail. Wear comfortable hiking shoes as the terrain is uneven and rocky and would not be suited to anyone with mobility restrictions.

Coincidentally, fellow blogger Marcia and husband, Dan, visited America's Stonehenge the same day we did. Our paths didn't cross that day, maybe on a future outing. You can see the blog post on their visit here.
Posted by Beatrice P. Boyd at 7:00 AM

I have very recently read of this site from another blogger. She didn't go into the detail that you do, however.

Certainly an interesting site that poses many questions, many of which will remain unanswered. I know that ancient sites of human settlement have been found in the arctic with similar mysteries enshrouded in them. Perhaps it's a good thing that we can't unravel everything.

Well its a talking point if nothing else. I've seen odd stones in rows on a hillside in Dartmoor never had a camera when I did but never forgot the sight of them

I had no idea we have a stonehenge here, it looks like a place I would love to visit and wander. hard to believe a fellow blogger was there the same day. very unusual..

I am not dissapointed at all Beatrice, I actually am very thankful for you to share this because I never thought that this place exists and this is a very important landmark and site that can answer a lot of questions about man and culture. Thank you for sharing this.

How interesting. I had no idea that such a place existed.

You did a grand job highlighting this place - much more detail than I did. I'd forgotten we'd been there the same day.

Before I write up the blog entry about the Flume Gorge I've got to figure out why Blogger mixes up the photos when I insert them. That was a real pain for the Stonehenge write up since I was planning to use the trail guide to explain the photos.

We are staying closer to home this week. Walk along Mascoma Lake on the rail trail is about it today or tomorrow.


"Fall is the perfect time of year for unexplained mysteries." Yes, you are so right about that. And I LOVE this time of the year.

VERY interesting post! I knew of the Stonehenge in the UK, but had no idea we had one here in America. And it makes sense that it's in Salem, NH because that seems like the perfect place because of the wonderful "historical vibe" there.

Beautiful photographs! And I love the whole astronomy/new age connection to both Stonehenge's. It's kind of the same thing when it comes to the mystery of the Lost City of the Incas in Machu Picchu, Peru. No one can figure out how it was created being that high up in the Andes.

Thanks so much for sharing your research. Very much enjoyed! Have a great week!

I had no knowledge of any of this. How exciting it all is. You did a great job gathering all this information. Thank you, and you have a super day, hugs, Edna B.

No matter who constructed what or where this is a fascinating site. It is beautiful too.

What a fascinating post! I liked it so much that I read it twice. I've heard of Mystery Hill in Salem, NH but knew very little about it - so I really appreciated your information and photos.

Autumn is indeed a perfect time for exploring mysteries. It's often much more intriguing when the mysteries are never solved.
It must have taken an enormous amount of work to move all those stones!!

Anyway, thanks for the tour.

Whatever its history, it looks interesting!

Never heard of it! You do find the most interesting places to visit!

Interesting and conflicting historical facts with lots of questions. Never heard of it, but it does look interesting to visit no matter the origin. :)

Full of mystery and interesting.
The post is informative as I had no idea that such a place once existed but then I suppose in many parts of the world it's similar.

Very interesting. From what you show there must be several different phases to the construction; some of the stonework is very skilfully done, while some looks like it's done by someone with little idea of building.

This fascinates me. I had no idea about it although I suppose I'm not surprised. Your research is really excellent and so are the photos. I really feel as though I learned soemthing today. Thank you!

Beatrice, No matter by whom or when America's Stonehenge was built, the mystery is really the draw. Another place to check out on a future road trip! Stay Safe and Take Care, Big Daddy Dave

It is an interesting report on rocks. Iowa had a glacier go over it so we have smaller rocks everywhere. We use to pick up those rocks so my dad could farm the land. Now they make devices to use with tractors to get them out.

This was so interesting Beatrice and makes me wish we were still traveling full time in our home on wheels! What an interesting destination America’s Stonehenge would be! .... so many wonders in this world! You just can’t see it all! ..... I also greatly enjoyed the above blog on the new shopping and product shortages... we finally ventured out into the smoke to grocery shop... it was definitely time! (Tuesday is our regular grocery day ... last week that was when we woke up to the terrible smoke and nearby wildfires ....this week, the air quality is still terrible, but of course we are grateful to be safe. )

It looks like an interesting place to visit. I wonder what the real story is. Mystery Hill sounds like a good name. I'm glad you checked it out and shared with us. I don't know if it's worth a long drive to go, but if it's nearby, a good exploration. Happy weekend. Hugs-Erika