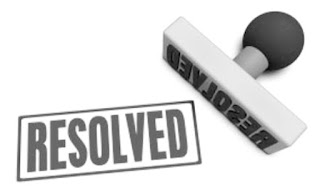 My last post included a question about a recent Blogger issue. One blogger commented on a similar issue only on an iPad. For myself, this issue was on both an iPad and desktop PC, both using the Apple browser, Safari. Here's a repost of that issue:

? Has anyone else using the Safari browser been experiencing problems with Blogger? This post took a longer than usual time today as I kept getting the message: "Safari cannot connect to the server" after selecting Design in the header bar. I found a workaround, but it was cumbersome. I'm not sure why this issue started, but hope it's a temporary glitch and not something that will make future posting and updating difficult. A secondary issue is that when I went to update this post, some parts of the original wording had disappeared, very strange indeed. I apologize, in advance, if you find some incomplete sentences.

What to do?
I checked online and followed many suggestions including resetting the network on the iPad, turning it off and on, shutting down our home modem and turning on, clearing the cache of stored visited websites.

Results
Not one, zero, none of these suggestions worked and I tried all of them. The issue remained. But, it's been resolved and that message no longer displays and I can connect to the server.

What Worked?
Reverting to legacy blogger and ditching the so-called new and improved version which I had switched to a couple of weeks ago, but wasn't completely comfortable using. In comments on this blog and others, a number of many bloggers have voiced their dissatisfaction complained about the new Blogger interface. Some reported issues with inserting photos and other images.

The same was happening for me. Sometimes text would mysteriously not be there when the post was published, even though it was in the draft version. This happened several times when I was working on the previous post in the new interface. Oddly enough, it was always the same wording. Reworking the affected paragraphs and checking back several times finally resolved that issue.

A few other new Blogger interface issues for me: comments could no longer be marked as spam and then deleted. Preview wasn't always working when a draft was in process. Full-size photo images would not align left easily.

My Plan . . .
Until the bugs (and any/all other glitches) are worked out, I'm staying with the older Legacy Blogger interface as long as possible, no more switching to new and unimproved. That means until I get kicked off and forced to update. Hopefully, the folks behind Blogger will resolve some of these issues, and soon.

How about anyone else?
Posted by Beatrice P. Boyd at 10:00 AM

Silly me, I ignored the obvious. Safari is not my browser on my PC.

I haven't tried the new blogging system yet. I'm sticking with Legacy. I'm not so good with big changes!

I have had no issues with the new blogger but then I don't have any Apple products and I don't use Safari so that might be why. Other than not being able to find where they put things that's the only thing that I have found! I saw other people talking about your problem and I'm thinking that yesterday and the day before they were working on fixing those issues and it was making other people have issues. I know they made changes yesterday while I was at Bob surgery because when I woke up this morning it was different

" I'm staying with the older Blogger version as long as possible, no switched to new and unimproved. "

Good for you! I've been with blogger since 2006 and still love it for many reasons. However, their updates are the absolute WORST. This is why I NEVER update the interface until they force me to do so. The last time they did an update, I never switched over. And it took them well over a year to make me do it. That's why I have no intention of switching over and going anywhere near that TRY NEW BLOGGER button.

If I post using the new blogger it doesn’t appear on the reading list that bloggers will see. I have to go back to legacy and update and that seems to fix it. I’m using google browser on my iPad as I cannot comment on the safari browser. Hey ho I dare say tomorrow will have a new set of problems. Have a good weekend. B x

I think you've got it right - wait till the last possible moment to change. I've encountered a couple of small issues, but within a few days Blogger has overcome the problem. Hopefully it'll all be up and running properly by the time you have to change over.

I'm staying with Legacy as long as I can.

I made the switch. I figured I'd have to get used to it eventually so why not as I redid my blog. Even the archive problem seems to be working now.

Same here....and I think I will go ahead and switch back while I can. It will be time soon enough to be inconvenienced.

I tried the new blogger about a month ago. I figured out how to navigate through it but didn't care for it at all. I wonder what's the point in them doing this, probably nothing. I'm with you, I went back to the old Legacy and will stay until it goes down. :) Have a wonderful weekend.

BTW, the Dungloe River walk is about 5 minutes from my apartment. Nice and convenient.

I have been using new version for a while, and I agree that moderating comments is a hassle now.

Even with the old version, I couldn’t write a blog post on my iPad, it wouldn’t let me scroll down. So, unless it’s a very short post, I always write my posts on the laptop.

I’m trying to figure it out....gonna give it time but just might go back to the old familiar way again! Ugh, change.

I've been using the "new" blogger for several months now. It took quite a bit of getting used to, but I think I've done it. Tonight, however, I decided I'd go back to the "old" blogger, even though I knew it was temporary. To my surprise, it didn't make much difference. But I am sticking with the tried and true for now and enjoying the familiarity.

i use chrome for my browser. i had a terrible time making a new post. couldn't figure out how to edit it. and you are right, the spam thing is an issue. so is the reading list. every single one of the links to your blogs that i click on, redirects me to your blog with another link. very weird. i better copy all the new addresses before the new blogger deletes them all. frankly i prefer what was. i do not like the new format at all.

This is so helpful. I don't think I'm going to even try the new one. As long as we can stay legacy,I'm staying.

Yes, I have had all those issues and more. I often cannot click through to my Design page. I get an error message and a try again later message. If they are having this many troubles, I think that they will have to postpone that arbitrary August 24 date as they postponed the July one. Maybe all of us using the new format are the guniea pigs.

Hi Dorothy :) I've been tempted several times to switch back to Legacy but I'm forcing myself not to because they are simply removing the legacy version by the end of the summer (I think that's what I read). I've given Blogger lots of feedback and there are some nuisances...there seems to be extra steps to many things that didn't have extra steps before which is annoying. When I click on preview, I can't just hit page down or scroll on my laptop, I have to put my mouse on the side and scroll down each time, which is annoying. I've COMPLAINED (lol) about that to Blogger but they haven't fixed it yet.

I have yet to try the New Blogger. I don't want to beta test new software.

I've been using the new Blogger since it started and so far I'm doing okay with it. When I have a problem, I ask folks and usually get some answers. Other times I just poke around till I find what I'm needing. I know they are working on changes, because I see them lots of days when I go in to post. I don't have Apple. I hope it gets easier for you, hugs, Edna B.

I had the new Blogger inflicted --uninvited-- upon me a couple days ago. My pen-pal, Dr. Mulligan --currently in Seattle-- told me how to correct it. Yes, the "New Blogger" system is a problem. He and I are grape-big men and don't care for exploitation, especially of the lollygagging sort and that's the truth! You're on Safari(?), but this problem reaches from Google to infinity. Incidentals aside, I sure like your blog and am following via Google Friend Connect. Thanks for visiting my blog too.

I've been using the new blogger since it arrived one day and I realised I was using it. I use Chrome. I gave up using Safari for Blogging years ago and used Mozilla until somewhere around the middle of last year. I have no problems with the new interface although there are a couple of wee niggles.

Hi Beatrice. Thank you so much for your visit on my blog and for leaving your very heartwarming comments.

I did have some challenges as well in using the new and "improved" version of blogger even if I am a person working on the IT field. I very much agree with you that there are still bugs and even when I use my phone (and the Safari browser) I do get problems especially in movement within the canvass where you compose your post. On the other hand, one thing I like about this new update is the HTML version of creating the post (geek side) because it color codes the tags which is a big help in case you forgot to close a tag.

But I am with you in the hopes that Blogger would still continue to update because there really are a lot of things they need to fix and with that, I hope they keep the legacy version for a long time. Sending warm greetings from the Philippines to you Beatrice!