It's time to celebrate 🍾 WHY?

While those of us over a certain age no longer count candles on a cake, it's far better than the alternative, don't you agree? While I won't celebrate with a cake, there will be some form of dessert today.

Beside being my birthday, today is also the feast day of Saint Blaise, the Patron Saint of Throat Ailments and English Wool Combers (you'll see this connection later). By now, some of you may be wondering who's Saint Blaise and what did he do?

My knowledge of Saint Blaise comes from parochial (Roman Catholic) school days in my native NJ. That's why I'm using this post to relate his story since, as with anything for me, there's always a story to tell. It seems that the story of Saint Blaise is not well known, if at all.

Saint Blaise is credited with starting the sacramental of the Roman Catholic Church known as The Blessing of the Throats, observed on Feb. 3. It's celebrated on this date in Eastern Catholic Churches, and in parishes of the Anglican Communion as a commemoration.

A sacramental is an observance like, but not counted, among the sacraments. Examples include: holy water, the sign of the cross, crucifixes, rosaries, religious pictures, Holy Medals, liturgical candles, statues, palm leaves, ashes on Ash Wednesday services.

Saint Blaise was the bishop of Sebaste in Armenia during the Fourth century. Few details are known about his life. Many of its miraculous aspects were written about in the Acts of St Blaise, some 400 years after his martyrdom. According to accounts, he was described as a good bishop who worked to encourage the spiritual and physical health of his people. He was a physician before being named a bishop.

Although the Edict of Toleration (311), granting freedom of worship in the Roman Empire, was five years old, persecution still raged in Armenia. In 316, Agricola, the governor of Cappadocia and Lesser Armenia, arrested Bishop Blaise for being a Christian.

On the way to the jail, a woman set her only son at his feet. The boy was chocking as a fishbone had lodged in his throat. Bishop Blaise cured the child. One account related that a miracle happened on the journey to prison when Bishop Blaise placed his hand on the boy's head and prayed. According to another, the miracle happened while he was imprisoned and formed a cross around the boy's throat with candles.

The use of candles to bless throats stems from when Bishop Blaise used candles while in prison. His supplier was a woman grateful after her pig had been rescued from a wolf by Bishop Blaise. She visited him in prison, bringing food and candles to light the dark cell.

Governor Agricola, while amazed, couldn't get Bishop Blaise to renounce his faith and sacrifice to pagan idols. His first refusal resulted in a beating. The next time, he was suspended from a tree and his flesh torn with iron combs or rakes after which, he was beheaded.

In modern blessings, candles are joined together by a red ribbon, the color of martyrdom. It's customary to touch the throat with the candles, but not required, especially if the candles are lit, which they are in some places. Candles are held over the person and a blessing is recited: Through the intercession of Saint Blaise, bishop and martyr, may God deliver you from every disease of the throat and from every other illness, in the name of the Father, and of the Son, and of the Holy Spirit.

In my elementary school days, I felt very special every Feb. 3 as my classmates and I walked to the adjoining church for this blessing. It's been a number of years since I've participated in this event. This year, I will participate as we live within walking distance of a Roman Catholic Church.

Now you know two things for today — my birthday and the story of Saint Blaise. But, there's more. 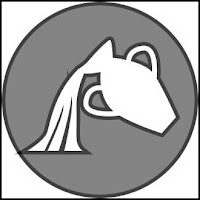 My astrological sign Aquarius, the water bearer, is considered an air sign.  The water element represents emotions; Aquarius is involved with water by carrying it.
Aquarians are said to highly value their freedom and are thought to have active minds, which can lead to hours spent thinking about interesting ways to approach life — which could explain my passion for online sleuthing. They are optimistic and compassionate towards others. Aquarians born on this date should guard against pretense, and self-indulgence — so that's why I like chocolate so much !


Happy 🎁 Birthday to All of Us 🎈
While I have no special birthday plans, Grenville may surprise me 😮.
Posted by Beatrice P. Boyd at 12:00 AM

Belated birthday greetings and my thanks for an interesting blog. My mother's birthday was 2nd January but the older she got the more she hated her age. So sad that she couldn't enjoy birthdays like we do.

I think I need a blessing from Saint Blaise as every illness of mine begins with a sore throat.

Alas I am Protestant, and he won't like that.

Happy happy belated birthday, we are so fortunate to have each one!

I am trying to figure out why everyone is say happy belated, I am pretty sure today is your birthday, so I am saying Happy Birthday, I know you will have a great one, you always do.

I hope your birthday is joyful and blessed - filled with all good things. Cake and candles aren't necessary. I gave up counting candles when I turned 50.... and conveniently can't remember how old I am.

I never heard of St.Blaise but his story is fascinating. What a tragedy that he was killed for being a Christian. By the way, my mother attended the Sacred Heart School in New Brunswick, NJ.

Happy birthday. Have a great day. It's a bonus to have a birthday on a special day.

Happy birthday to you! It's also our oldest grandson's birthday today. He is now six years old!

Wishing you a Happy ,Wonderful Birthday!
I like to hear and read about miracles. Saint Blaise, patron saint of throat ailments, seemed to have done quite a few.

Happy Birthday to you! I hope your day is filled with happiness and lots of love. I found your story about Bishop Blaise very interesting. (I'm not catholic but many of my friends are) You have a super day, hugs, Edna B.

Have a most happy birthday. I see ice cream in your future. I enjoyed learning about St Blaise.

Happy Birthday to you!!

Happy, Happy Birthday to you.

My entire small town could use Saint Blaise right about now. Happy Birthday, I know you made it a great one.

A great big and most sincere HAPPY BIRTHDDAY!!!

Happy Birthday! An informative post on St. Blaise. I'm sure I knew all the details of his life at some point but hadn't thought about them much. Our parish had blessing of the throats this past weekend.

Happy belated birthday. I've actually been thinking of Saint Blaise this winter. I learned about him from a high school classmate many decades ago.

Happy Birthday and I am right behind you. Feb. 15th I will be 87 … I hope that means that we Aquarians live long lives. Have a great day and let us know what Grenville surprises you with.

I hope you had a wonderful day.

I must have missed this post so happy Birthday even if it is late. I had St Blaise is not a name I have come across much but I did visit one called that a few miles from where I live
https://thechurchexporer.blogspot.com/2013/11/st-blaise-milton.html
Hope my visit gives you joy

Happy belated birthday! Hope you had a great day.

i liked the story about candles
your attachment with saint and church is really overwhelming
wishing you happy birthday ,may you seen many more ahead with loved ones
hugs!

A very belated Happy Birthday to you. I'm so far behind.

Mine was two days before yours. I don't celebrate it anymore.