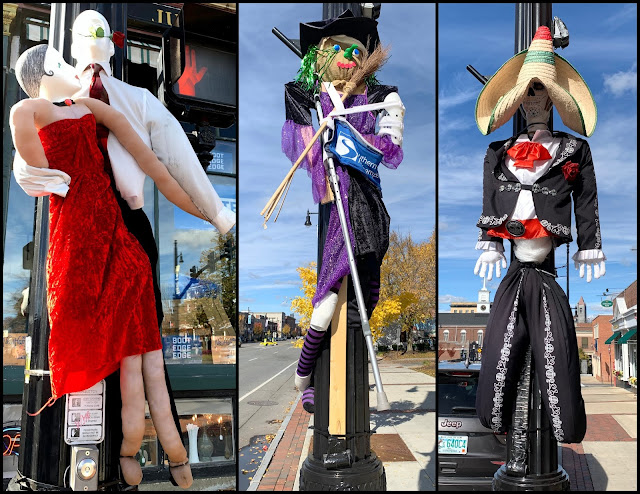 Seasonal scarecrows are hanging around downtown Nashua, NH, and they're really hanging since all are suspended from downtown lamp posts. Some are more creative, others not so much. Many of those on display seem rather haphazardly assembled. 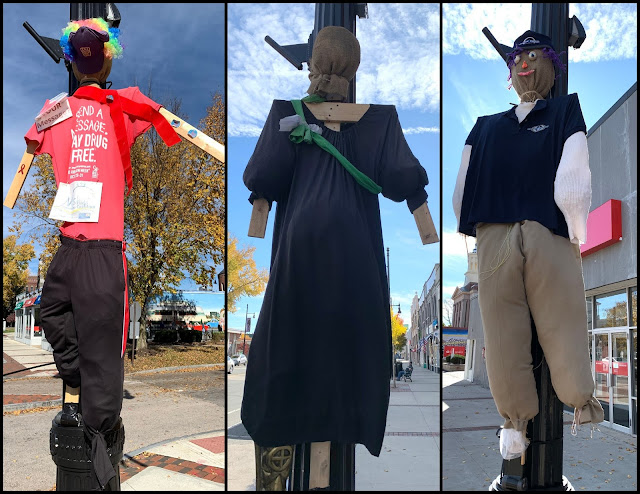 A scarecrow is defined as an object, usually made to resemble a human figure, that's set up put in a field to scare birds away from where crops are growing. It's also described as a very badly dressed person who is odd-looking, thin or frightening, but harmless. Some of this year's displays fit those definitions quite well.

We notice there were fewer scarecrows than in recent years with a total of 30 this year. There was a definite scarcity of creations from schools, which had previously been active participants. 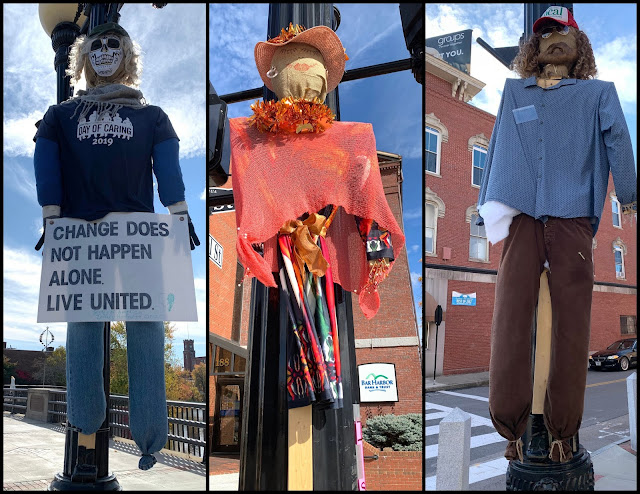 The powers-that-be management here at the mill apts opted out this year. In the past 2 years only a handful of residents, myself and Grenville included, volunteered to help with the project, so lack of interest may have been the reason. Perhaps that was the case with other groups too. 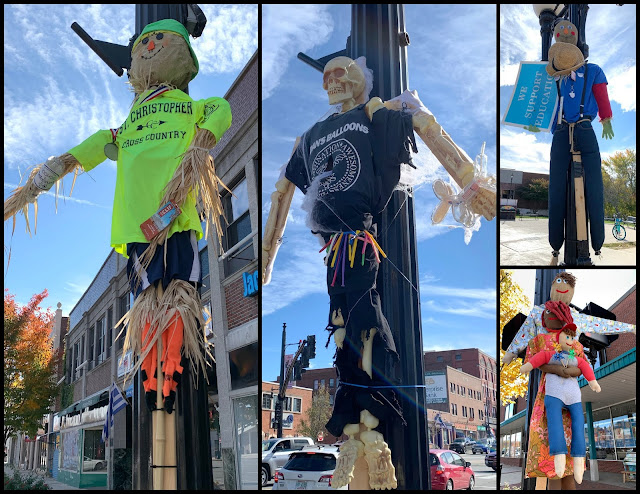 These seasonal works of art are crafted by local businesses, organizations, schools and non-profit groups. There's online voting for the top three winners, without any actual prizes just "bragging" rights. 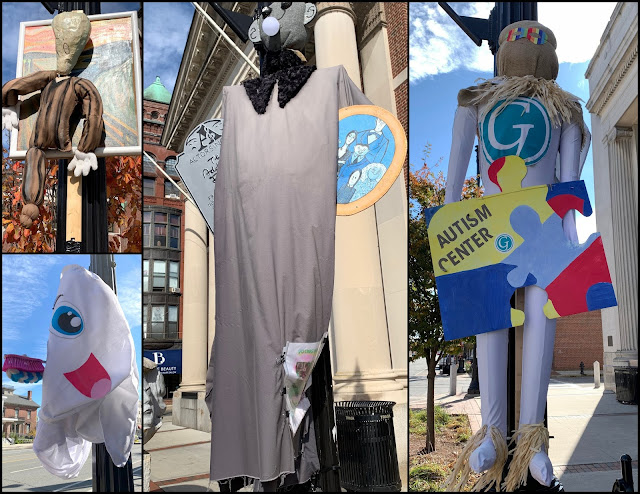 The wood body and burlap head are provided to all participating groups, which then add the creative touches. These two entries has very little embellishments to the wood frame. Oddly, the one on the right below was the entry of a local art group. 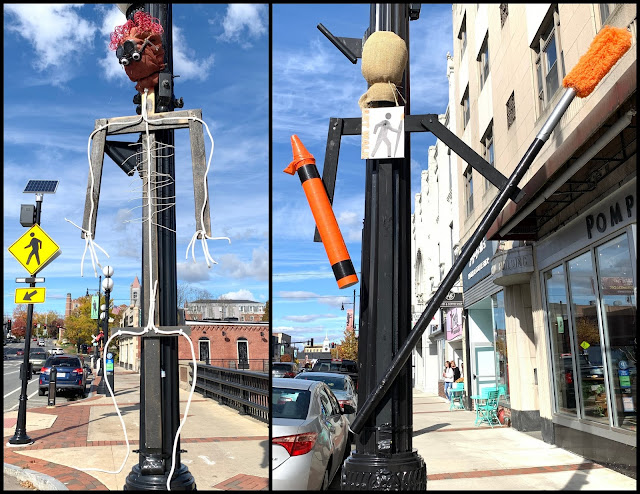 Many scarecrows, like these two feature-less and colorful entries, had no labels to ID the participating groups. 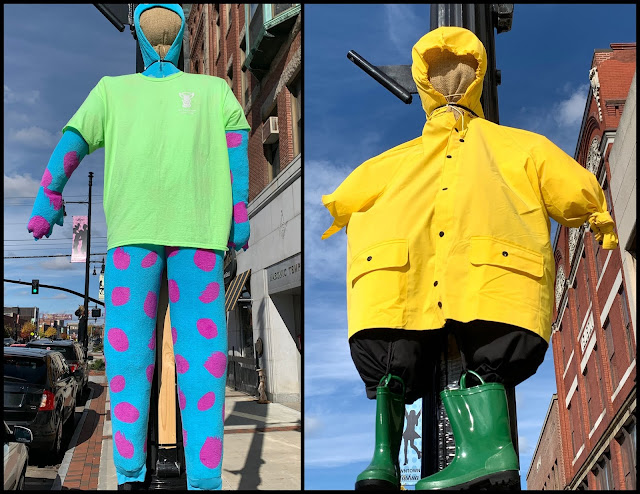 My personal favorite was this pumpkin scarecrow posted on the lamp post near a downtown brewery. While this wasn't a contender, it was the best downtown scarecrow. 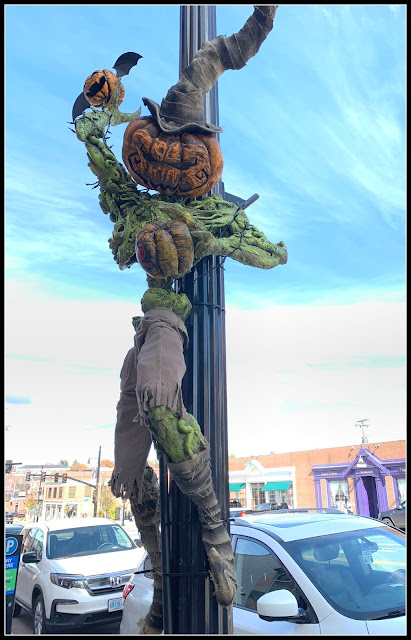 Does your town or community have any seasonal decorations?
Posted by Beatrice P. Boyd at 7:00 AM

I have not been in downtown in years so don't know if we do or not. I know they put out lamppost Christmas things and lights at the water front. these are all very creative, it amazes me the ideas they have. I like your favorite.if I were voting I would have a hard time picking which one

Awesome! These people really get into the theme of Halloween which is coming up sooner than I think.

What fun … you have some very imaginative art people to produce so many types of scarecrows.

I’m with you, that pumpkin one is really good! Great scarecrows all of them , thanks to all the work put into them! Look great!

I was hoping you would post the scarecrows again. I'm sorry to say that this year's bunch were mostly disappointing. I wonder if they just didn't feel the Halloween spirit this year. The last one shows a spark though. I really like it.

An active little town you have there.

My favourite is the last one.

Well, this display of scarecrows is certainly colorful and unique. A lot of them have a southwest flair, like ones I've seen in Texas. The last one confirms this!

These are really fun. Not only for fall but also for Halloween. My town is very small and rural and other than the elementary school parade on the 31st, there's not much else decorated here.But that doesn't mean it's not almost Halloween. There's plenty of people who put out their pumpkins, and more. Hugs-Erika

I would have loved to see the scarecrows. I am trying to remember if we in the UK ever saw such displays. Maybe the war years were preventative and we never got round to enjoying ourselves.

I agree that the pumpkin scarecrow is definitely the best! People around here do NOTHING. I decorate the house a little, carve pumpkins and make a fun feast though! I love Halloween!

Some very creative people in your community. My favorite is the last one.

Great fun! I don't see any crows so they must be doing a good job. They have similar events here, mostly in villages, though I haven't photographed any lately.

what an interesting competition Dorothy :)
i enjoyed looking at the variety of scarecrows ,back in my village farmers used to place them and we as kids were so attracted by those creatures

either my favorite is the last one