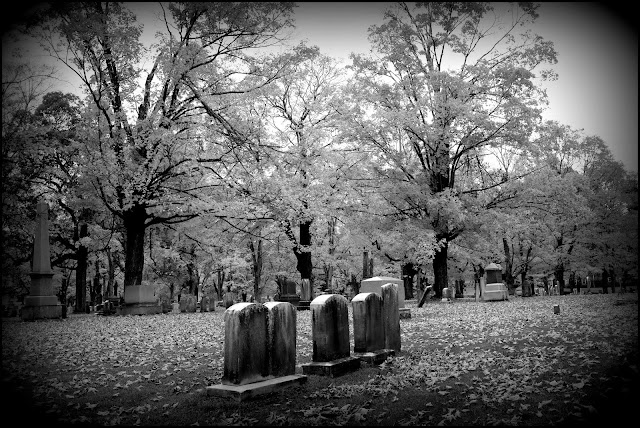 Today's the day when ghosts and goblins and other things that go bump in the night are thought to be out. Grenville and I won't be tempting fate. We plan to remain at home tonight watching our favorite 🎃 films, Beetlejuice and The Addams Family. (Comedy is our preference as we're not into Halloween slasher movies, like Friday the 13th.) 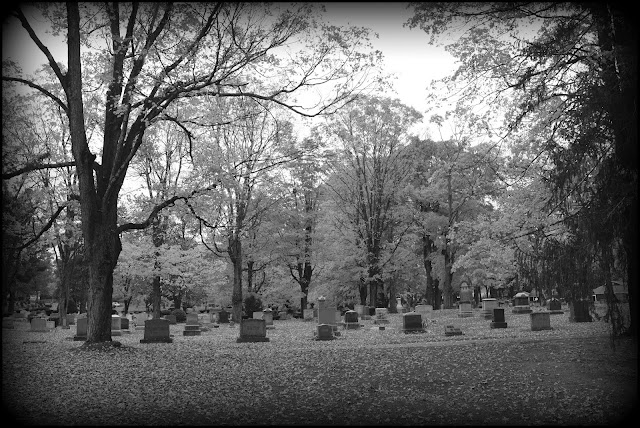 But last week on an overcast and very dreary day, I explored a Nashua, NH cemetery that's about 2 miles from our mill apt residence. It wasn't to look for spirits, and thankfully none appeared. My purpose was to do shoot B&W white scenes using various exposures and an overcast day seemed ideal. 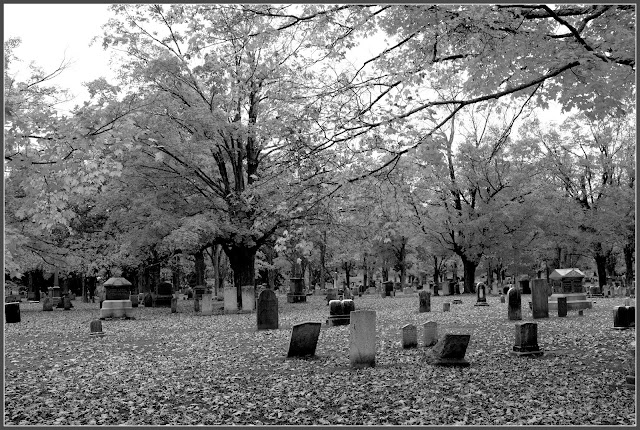 Edgewood Cemetery is one of the city's oldest burial sites. Some headstones date to the early 1800s, and many were topped over perhaps due to age or, worse yet, vandalism. 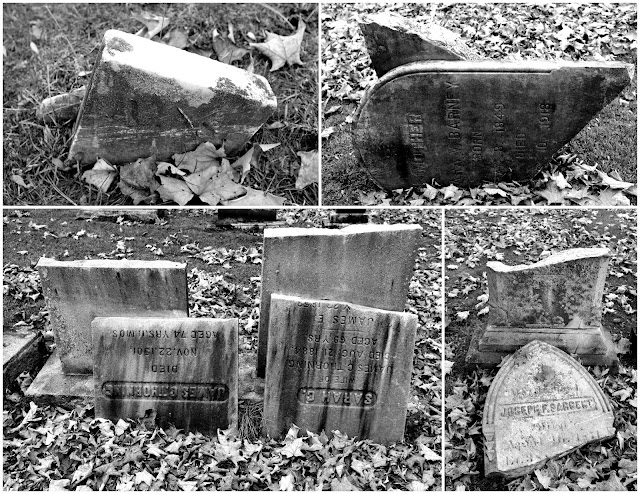 While they hadn't collapsed (yet), these headstones, and others, were leaning rather precariously. 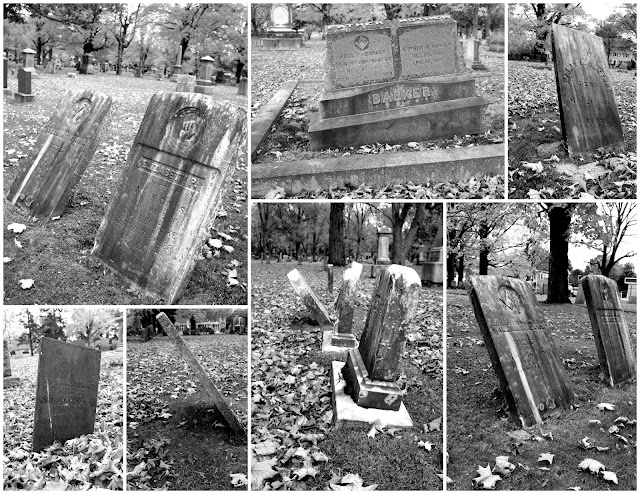 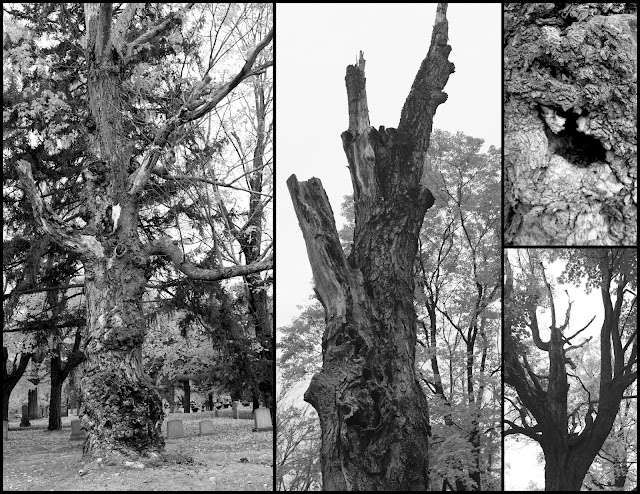 Some trees had already fallen and the stump was left in place. 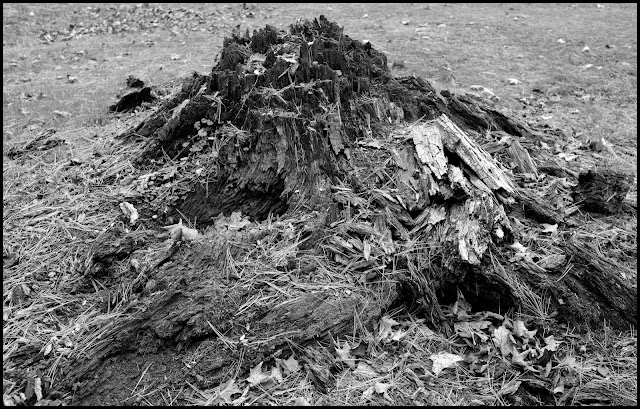 Other trees were hosts for various fungi, which were really quite intricate, despite my macro shots not being as sharp as possible. 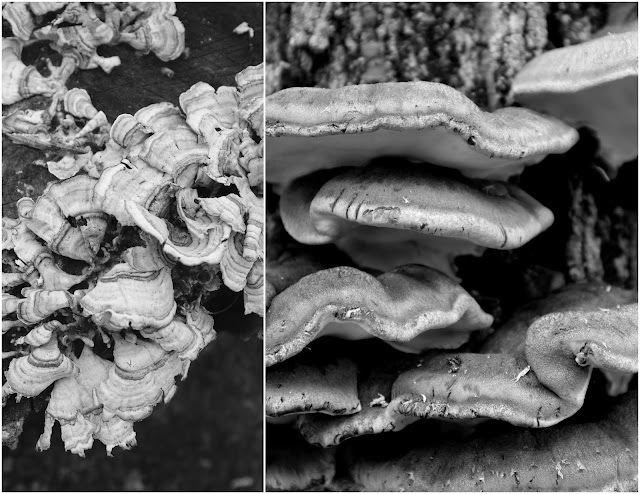 While I don't know the term for the way this tree has expanded, it was an interesting subject. (Please leave a comment, if you do know.) 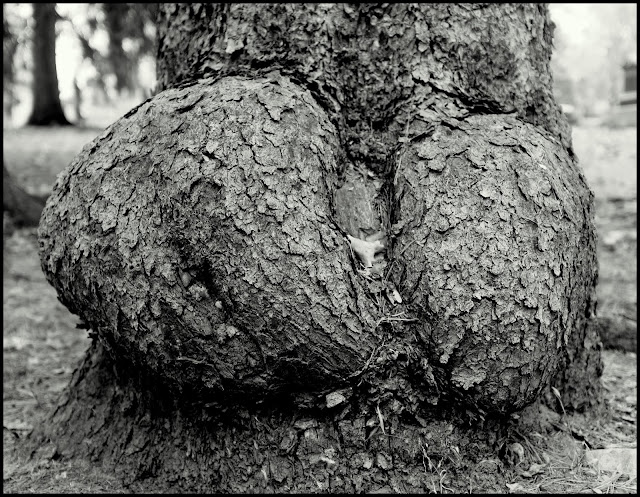 Can you see the face in this tree trunk? 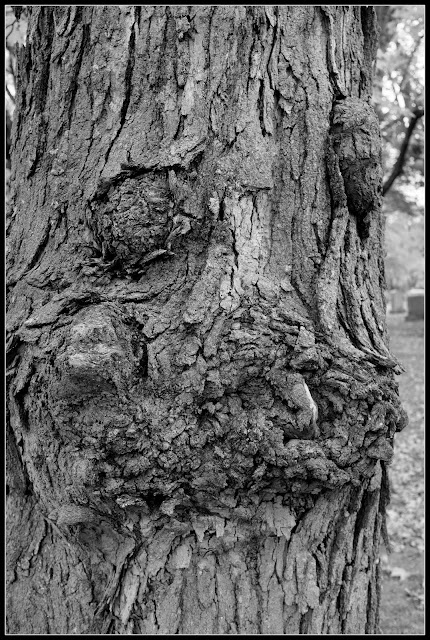 Despite the cemetery being a large one, there was a single mausoleum which bore the family name of Anderson. So I did a bit of online sleuthing and learned that, in 1885, Frank Anderson co-founded a large Nashua shoe factory that stretched an entire city block. The factory was sold in 1912 and an Indiana casket company from the town of Batesville took over the plant. Today, that building houses Palm Square Residences. 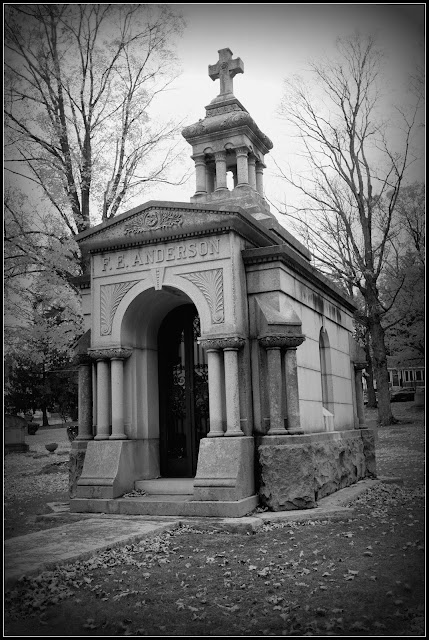 After Anderson's 1925 death, his widow approached city and cemetery officials with an offer to present a stone chapel to Edgewood Cemetery in her husband's memory. The chapel sits atop a rise in the Northwest end of the cemetery. Last year, the 83-year old building received a $100,000 make-over, a gift from a local family in memory of their son. 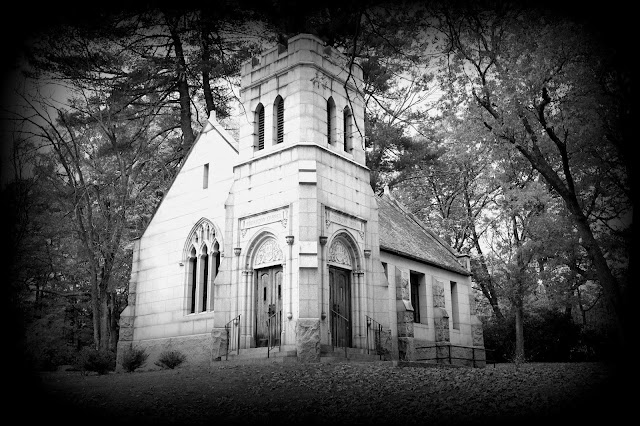 As stated, while I didn't see anyone else, living or otherwise, during my outing, it was time to leave after spotting these headstones. There's no need to tempt fate. 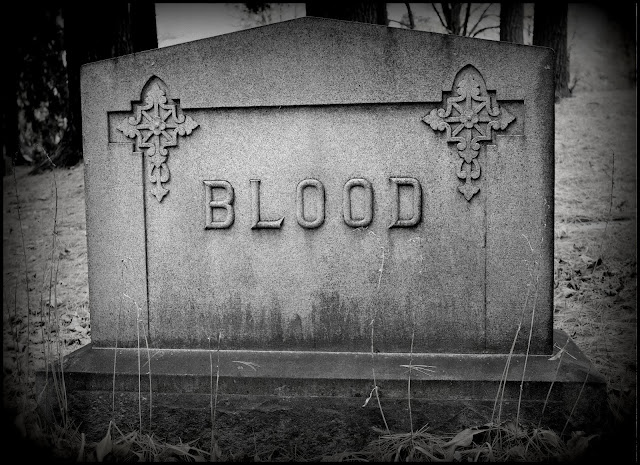 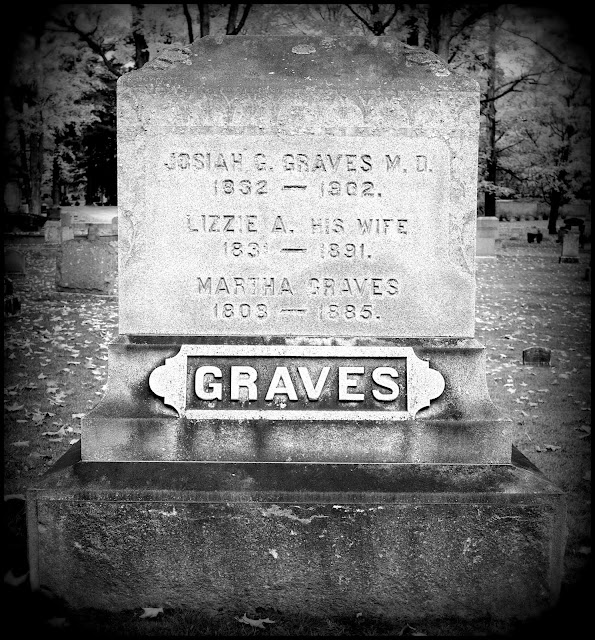 However, you're spending Halloween, keep a lookout 👀 for any 👻 spirits, as 💀 it's their day to celebrate. 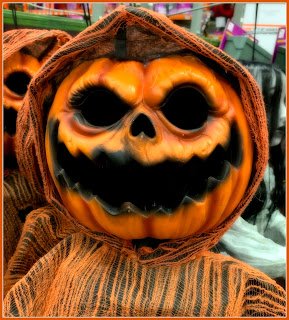 What a deliciously appropriate post for Halloween! I love the black and white photos - - they project such a somber, old-fashioned atmosphere. And, yes - I did see a face in that tree.

I've always had a passion for wandering through old cemeteries, especially at this time of year. There were some really good ones when I lived in the Missouri Ozarks. It always generates a peaceful, reflective feeling - like being lost in time.

Have a happy Halloween! I always enjoy the Addams Family movies.

I think there is something wrong with me for not bothering about Halloween. Do you think I am missing something? Nonetheless, I wish you a happy time.

Good, thorough job on that photoshoot.

Yes, I could see the face.

Happy Halloween Dorothy! :) What a lovely post. I really love your photos. I like to visit cemeteries, I find them so peaceful and the grave stones are works of art. I see the face in the tree! That used to be a big hobby of mine, photographing trees that look like other things! I should pull out some of my old photos. I would hate to think those head stones were vandalized. Staying home and not tempting fate is a sound suggestion! :) I watched those two movies last week! Michael Keaton is such a hoot.

Wonderfully moody in black and white.

This is a wonderful post for Halloween. The widening tree probably ate too much Halloween candy. I see the old man of the tree. I have seen many over the years. My own thought is that either the tree is dying or more likely it is in contact with something that is toxic to it. All of the old men of the tree look pained like that.

Hi Beatrice. Of course you can include my blog on your blog list, and I shall certainly be following yours. You've done a very good job of photographing the cemetery and the black and white suits the subject admirably. Swellings like that on tree trunks or branches are known as "burls". They are the trees reaction to a number of things including bacterial invasion, insect boring and wounds in the bark. They don't seem to do the tree any harm and the interesting wood grain they produce is much prized - the kind of thing they use for the dashboard inlay on cars like Rolls Royce.

You captured some nice effects in your photos

I might add you do not need to ask to follow my blogs just press the follow button if you like what you see. You must have gon and visited my other blog to know about not returning to visit the church. Reason is that most of the time it us used and it's not easy to get the time to revisit plus there are a lot of others I need to visit.. I have follwoed your blog because it looks interesting

What a great set of photos for Halloween. Love the black and white images. Perfect!

i found them perfect for the title of your post

i loved this oldest cemetery of you area ,everything you captured is looks in frame and lovely

how relief that you did not encounter any spirit
what if you did ,what would you have done :)

i so enjoyed the tree's weird shape ,very well captured
wishing you more blessings each step my friend !

I would not go to a doctor with the name of Dr. Graves. Love your blog.

Your black and white shots turned out well. I like your idea of Halloween movies.

I love your black and white photos! So lovely! I am not a morbid person, but I love to look at old cemeteries and read the headstones and look at the unique designs that some headstones have!