While on a (mostly) southern states road trip traveling from New Hampshire to Florida, we're sampling foods along the way. It's part of the road trip fun for us. Here's some recent dining experiences in several FL seafood restaurants. 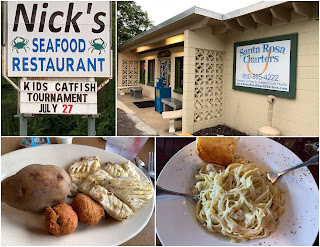 Nick’s Seafood Restaurant in Freeport, FL is a very casual, family restaurant. This family-owned and operated eatery has been at the same location since the mid-1950s and is being run by the third generation of the family.

Years before the restaurant opened, the site was a fish camp run by Nick and his wife, Miss Hattie. They sold bait and beer and rented boats for $1 a day. In 1963, the restaurant opened and sold raw oysters, fried shrimp, hamburgers and cold beer. Back then oysters sold for 55 cents/dozen, fried shrimp dinners were $1.55, hamburgers cost 30 cents and beer was 25 cents.The seafood was caught by local fishermen. Soon customers started coming in, parents and children, then children with their children and so on. Customers are still coming as the place was very crowded on the weeknight we dined there.

Singleton’s Seafood Shack in Jacksonville, FL, on Fort George Island was featured on the Food Network show Diner, Drives ins and Dives in 2010 and of those three choices, it fits the “dive” restaurant category best. It was opened in 1969 by Capt. Ray and Ann Singleton who fed locals and shrimpers in a small shack that has grown addition after addition and now leads out on to the St Johns River. 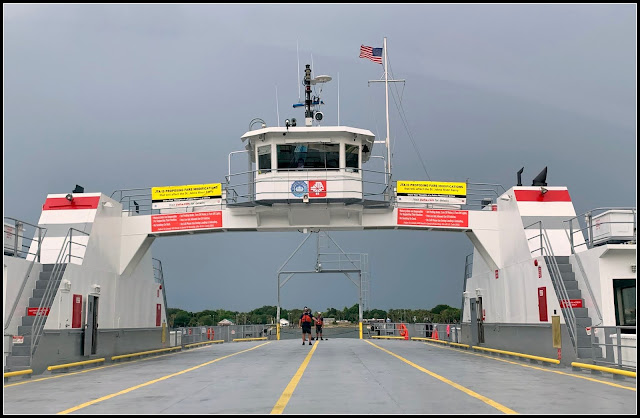 Singleton’s is in MayPort Village, a small fishing settlement, and we traveled there on the St. Johns River (car) Ferry (shown above) thanks to Grenville’s FL cousin. 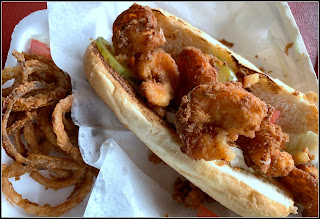 Some folks have referred to Singleton’s as a rustic old fish camp. But as it's name states, it's a great example of a Florida seafood shack where fresh caught fish is sold and served. When you enter, there’s a fish market where you can buy fish to go. You can also dine in the indoor dining room or outside on either a covered area or now.

There are low ceilings, wooden floors, bare wood tables and wood benches. Don’t expect plates, food is served on Styrofoam with plastic utensils and beverages come in plastic cups. While burgers and BBQ are on the menu, what matters most here is the freshly caught and prepared seafood. (After all, it’s in the name and also sold out front.) 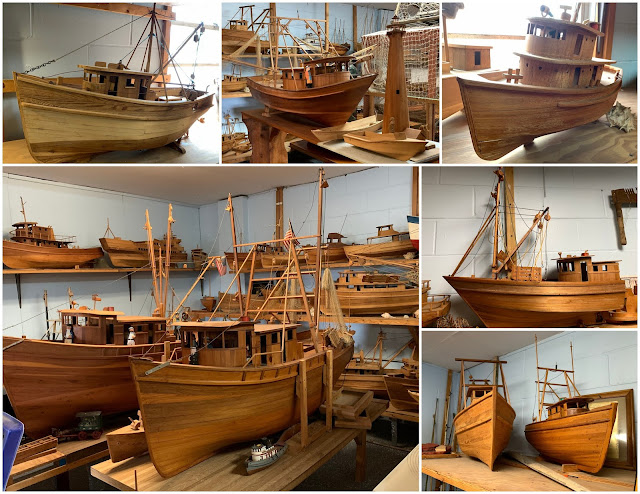 The seafood shack's decor is old nautical with lots of newspaper clippings. The late Capt. Singleton built over 130 wooden boat models. In the back of the restaurant, there's a museum with some. Reportedly, he never sold them, but many were donated to local charity auctions. (There's no charge to look at the models and marvel at their craftsmanship.) 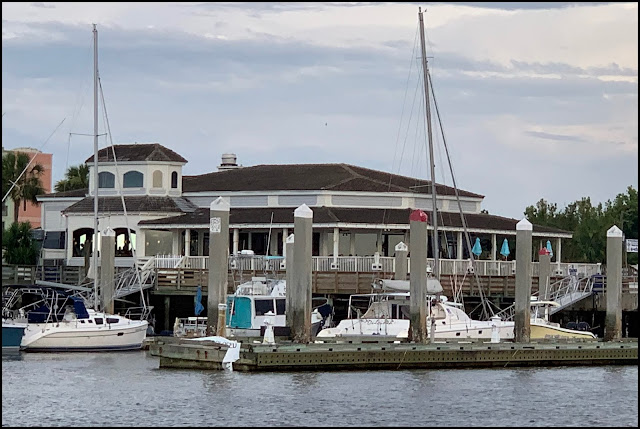 Brett’s Waterway Cafe in Fernandina Beach, FL has a great location on the water and the seafood here was good, although pricier and  served on plates with metal utensils as well (vastly different than Singleton's)

From our inside seating we had a great view overlooking the Fernandina Harbor and marina on the Amelia River. 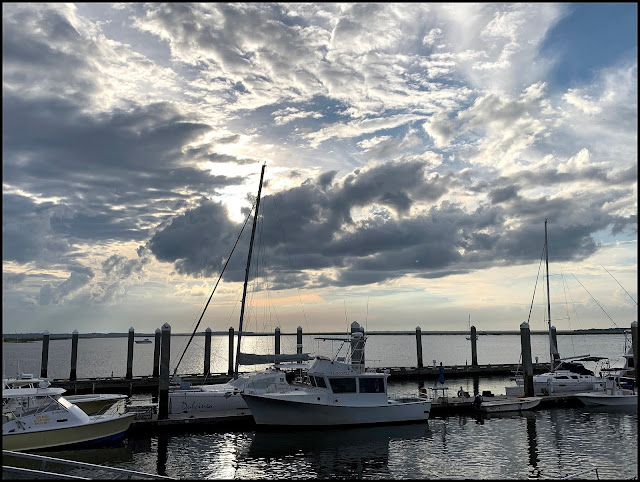 After dinner, it was a short walk to the dock for a sunset cruise. Unfortunately, it was  cut short due to threatening clouds which turned into a brief storm. 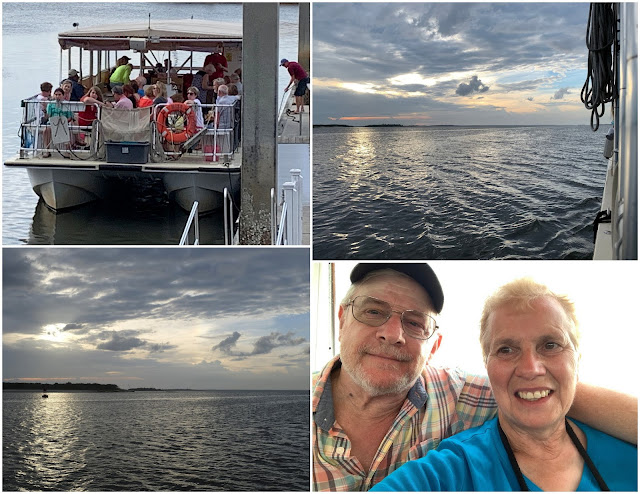 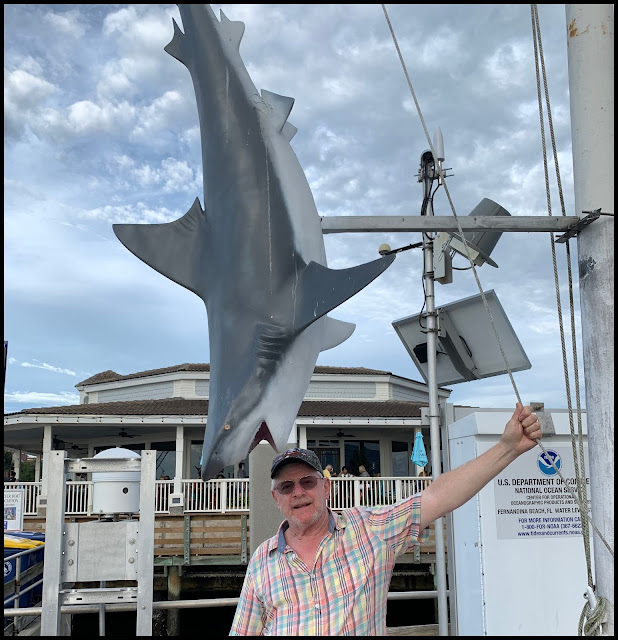 He didn't really reel this shark in, but posed with a "prop" near the dock.

Update — We're back n NH as our road trip ended last week. It was full of wonderful adventures visiting new places and seeing family and friends. There's a couple more posts before this trip ends online. Thanks for traveling along.
Posted by Beatrice P. Boyd at 7:00 AM

that sky is spectacular! and i would like eating at either one of the seafood places. that is one BIG ferry boat. would not ride on it though. i don't float or fly but it is really cool... nice shark LOL

I'd like to take a picture with that big shark too :D

Good to have you back home!
The picture with the threatening clouds is stunning!
I also like the orange structure of Singleton's seafood shack. The seafood looks good,though I must admit I never eat shrimps, oysters and the like.

The food looks SO GREAT!!! I love seafood, must eat more of it! And those ship models are wonderful. I love that shark photo! I haven't gone fishing in a long time, I always had so much fun. Did catch and release, caught trout, bass and perch...I don't have the heart to kill them, which is a bit hypocritical since I do eat fish! One day I want to catch my dinner though! And I've just now read your thank you note for comments, I will call you Dorothy from now on! :) Nice to meet you! :)

There is nothing like stopping for a good meal while traveling. You certainly had some good ones.

Those skies are awesome looking. The seafood looks delicious, glad you enjoyed your food stops at the places you ate. It's always a pleasure to try out a new place and really enjoy their food.
Have a wonderful weekend!

Wow. It looks like you had a fabulous trip. I am catching
Up as I just returned home from my own road trip. The food and sights look amazing. Are we as hot in NH as they say florida has been ?

The food looks amazing, what a great trip. I smiled at the photo of Grenville with the shark, there could be some tall stories ahead.

The skies are gorgeous there! So glad to know you are home and the trip was wonderful. Welcome home!

Welcome home, and thanks for sharing your adventures. It's a treat for those (i.e. me) who don't get out much.

I could eat fresh seafood every single night. I love that you find these gems.

Great pictures! Looks like you had some great seafood choices. Welcome home!

I love fresh seafood.
I haven’t been to that area, so thank you so much for this post. If I ever go, I know where to stop by for a meal.

I’m glad to hear you are back home safely.

Loved each and every photo from your trip in Florida. Thanks Dorothy and have a great week. Thank you also for my pretty birthday card and greetings :)

Hi, This is Sharon (alias Lady Jane) from Our Cozy Abode. I live in upper NH. I gave up my blog cause I was having trouble with security on my photos for some reason. I have a friend interested in moving to Nashua and I gave her your blog and she was looking at your pics of the mill and would like to talk to you about where you are and check into the apts. She and her daughter. Anyway, if you still have my email could you get in touch with me. Thanks, Sharon

You sure got to see a lot on this trip! Fun to look at the photos and enjoy them after you get home...fun for us too! Take care! Get some rest!!!

Thanks for your comment Lady Jane (Sharon), and sorry to hear about the issues that caused you to stop blogging. Sometimes, they can be so frustrating and time consuming as well. Now, I check for spam daily and remove such comments ASAP. I do not have your email address, but if your friend is interested in the mill apartments where we live in Nashua, NH, she can check out the Clocktower Place website and make an appointment to view the facility.

Thanks Beatrice, I will tell her about it. I miss blogging but still read a lot of my favorite bloggers. I cant access emails now that I am not a blogging participant which I do miss keeping in touch with people. I may get back into blogging at some point when I can figure out what happened to my site. thanks again and will go on to enjoy your great blog. lady jane (sharon)