Red Robin NOT the Bird 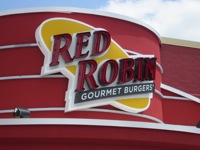 Red Robin is a chain of casual dining restaurants which Grenville and myself had never eaten in until yesterday as we usually avoid fast-food places. But, it was lunch time and, after spending several hours in an Apple store to download the new OSX Mountain Lion, other updates and get questions answered, we succumbed to the aroma of burgers. We had opted out of food court dining and gone to our car. Red Robin was a free-standing restaurant outside the mall. Also, Grenville reminded me of his scant breakfast 4 hours earlier.

Red Robin Gourmet Burgers is a casual dining restaurant chain with a menu focused on burgers made of beef, chicken, turkey and vegan substitutes, as well as a appetizers, salads, soups, and pasta. There's also a long list of fountain-type drinks, including milkshakes. Red Robin's biggest sellers are the gourmet burgers, which account for nearly 50% of the company's food sales. The average per person meal cost is about $10, excluding a drink but including "bottomless steak fries." There are more than 100 Red Robin restaurants in 13 states across the US and Canada as well as franchise agreements with nearly 100 restaurants in 17 states and Canada. 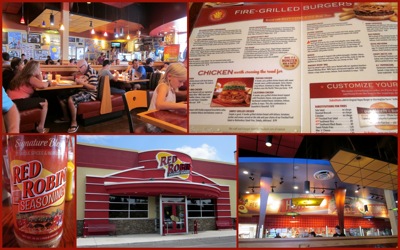 Red Robin started in 1969 in Seattle as Sam's Tavern, later changed to Sam's Red Robin and then to Red Robin. The restaurant no longer serves alcoholic beverages and is geared toward family and teen dining. A July 2010 post featured photos of real robins and background on the Red Robin restaurants. 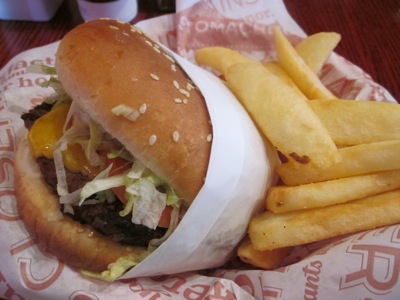 Grenville rated it a 5 and still prefers Fuddrucker's burgers billed (by the company) as "the world's greatest hamburger." 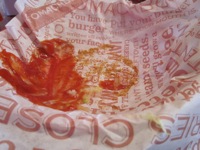 But, as you can see, there were no leftovers from this meal which included the cheddar burger for me and the bacon-cheddar burger for Grenville, and those bottomless stem fries, only one reorder, cause we KNOW they are bad for us.

we do not have one here, but the last visit to my brother in Augusta GA he said I am taking you to the Red Robin, i said what is a Red Robin and he said you will see. i love burgers they are my favorite food. it was a treat.

We have been enjoying Red Robin since the late 80's when we lived in Alaska--We just visited there too, and I still love their onion rings, and the Bonsai burger is still my favorite after all these years! I love it, but just try to go there hungry so I have room for it all!

We don't have it here and I doubt we'll ever get it either. The competition between fast food restaurants here are furious, at the moment is a Swedish one called MAX most popular.

Yep, been there. Great burgers. :)

It's been almost forever since I've been in one of those. As I recall, the food was pretty good then too!

We have them in this area and have been several times over the years. It's a place we used to go when we met up with our son and daughter-in-law as it was a favorite of theirs. Come to think of it, we haven't been there in a long time as now I usually cook for them at home, thinking that as they are both working and eat out a lot, they would prefer a home cooked meal. I hope that's the case anyhow ;)

And now, like other readers, I'm going to crave a juicy burger and fat fries!!!....:)JP

I don't think I've ever heard of that chain. The food looks good!

I haven't seen them here, but if I do, I know I'll be tempted.

I really like their onion rings, deep fried and greasy and probably soooo good for you!

We've been to Red Robin numerous times, mainly in the Seattle area, but there's also one in Anchorage, but none in Fairbanks.