No, we didn't find a pot of gold, but instead saw some gold in Nashua, NH.
This early evening view outside our apt window was quite unexpected, after a no rain day 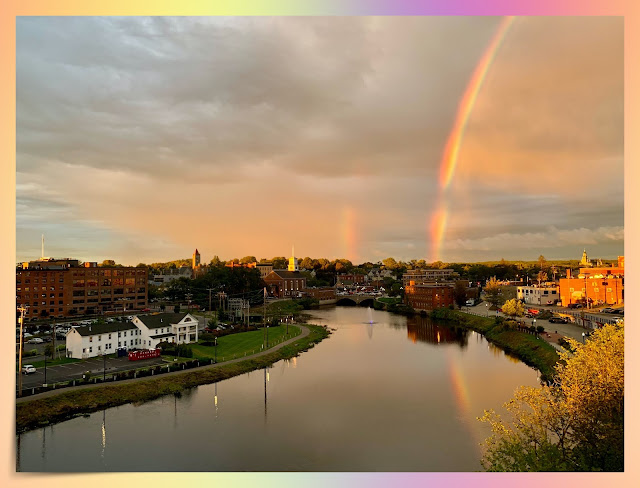 It’s a popular myth that where a rainbow ends there's buried gold. According to one legend, Vikings living in Ireland, looted, plundered, and buried treasure throughout the countryside. When they left, some treasure remained. Leprechauns found it and knew the Vikings had stolen which was wrong, so this made leprechauns mistrust everyone, Viking or not. To make sure no humans could take away what they now considered their gold, it was reburied underground in pots all over Ireland. No reports of anyone finding a pot of gold have resulted. 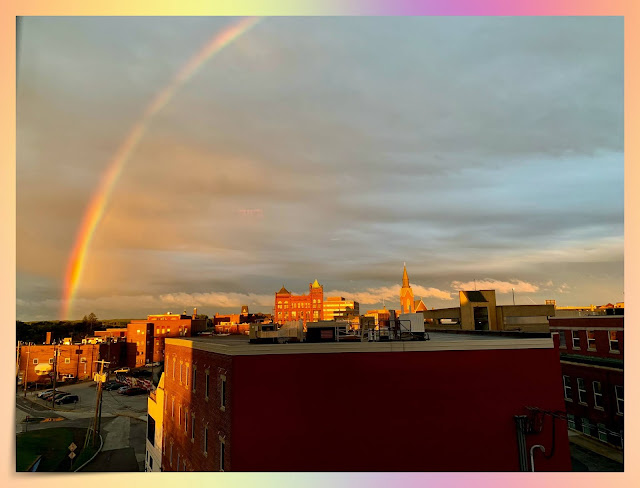 We didn't see the full arch which was fading fast, but still, it was a brief, beautiful sighting.
Here's a few (there are many more) rainbow info gleaned from online sources:
A post about rainbows has to end with a couple of rainbow songs. Many folks enjoy Somewhere Over the Rainbow sung by Judy Garland in The Wizard of Oz (1939).
Others prefer Kermit the frog singing The Rainbow Connection included in the Muppet Movie (1979).
Whatever, your preference, both are enjoyable songs (frogs have an edge on this blog).
Enjoy Your Weekend, Everyone
Go out & enjoy the weather, even without a rainbow
Posted by Beatrice P. Boyd at 7:00 AM

My favorite rainbow memory was when we saw one around 7 pm in the summer at Bryce Canyon.

Lots of interesting information about rainbows. I had no idea. Thank you!

beau and I saw a rainbow 3 days ago, it was beautiful but nothing like this golden glowing one.. beau said ho hum. ha ha,...

I love seeing the rainbow there and reading all the interesting information about rainbows. Thank you for that.

I enjoyed your photos of vivid rainbows, as well as the info about them!

I never knew that rainbows could appear without rain. The photo is beautiful.

While making the movie "The Wizard of OZ" several of the studio BigWigs wanted to cut "Over the Rainbow" out of the movie because they thought it only served to "drag the plot". Thank goodness that it was finally left in.
I think that Judi Garland singing that song is one of the greatest moments in Hollywood history.

My son has a couple of pictures of triple rainbows from a few years ago. It was a glorious sight.

There are lots of weird legends about Ireland. There was supposed to be a giant called Finn McCool who built a causeway to Scotland. But after an argument with another giant in Scotland he ripped up the causeway and all that's left is the famous pile of basalt columns.

I've only seen a double rainbow once. Fascinating that there are up to 1 million invisible colors in a rainbow that human eyes don’t see.


oh this is such Glorious and special sight dear Dorothy !!!!!

thank you sooo much for sharing this stunning photos ,treasure of so many childhood memories burst out in my heart :)

i never saw such gorgeous view since i moved into the city so miss all this terribly .

you captured it excellently indeed wow i am so happy to see this ,worth framing :)

more blessings to you and loved ones!

Had read a little about rainbows but never totally retained that in my brain. Good to read what you have written and like your rainbow photos.

That was the beginning of a double rainbow. I first saw one on the highway between Banff and Calgary. I may have seen a partial since, but those were pretty full and impressive.

Awwwwwww the Rainbow Connection!!! :))))
I see a lot of what I call "Fog Bows"...they are so interesting and it's usually in the morning when I walk the dogs on a cold foggy morning.

What a great shot of the beautiful rainbow. Thanks for sharing all the info too.

I love rainbows. The last one I saw, I was with my brother. You have a super day, hugs, Edna B.

You cover the magic and the science connected to rainbows. And you throw in two great songs to boot!

A lovely post. You have a great view from your apartment.

What a beautiful view from your window!!
And thank you for the additional information on rainbows. Very interesting!
~Mary

Many thanks for the information and photographs.

I enjoyed reading the info about rainbows, Beatrice.

Lovely shot of the beautiful rainbow.

That is a fabulous shot Dorothy. I love the story of the Viking and the Leprechauns. Hope all is going well for you.

Fantastic photos. The Wizard of Oz is one of my favourite films.