Home of the U.S. Coast Guard?

That's what Newburyport, MA, claims to be and continuing our anniversary road after traveling on the Mt. Washington Auto Road (Thanks for your comments), we decided on a first-time visit to this New England town, less than 90 minutes from Nashua, NH

Newburyport is a small, coastal city in Massachusetts, about 35 miles northeast of Boston. The city was first settled in 1635. Today, it has an active tourism industry with B&Bs, restaurants and shops and a historic seaport and is well-known for old-time charm.

Years ago, the city boasted a large fishing fleet and was a center for privateering in the Revolutionary War and War of 1812. Starting in 1832, numerous ships were added to the whaling fleet, later clipper ships were built there. Newburyport continued to be known as a  shipbuilding town into the 19th century. 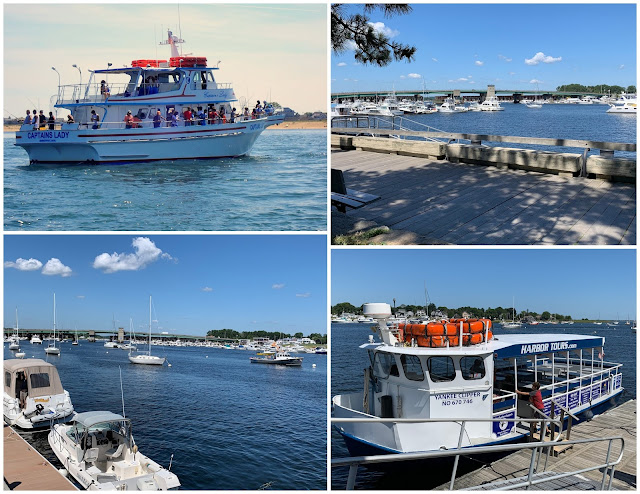 Today, the city gives little hint of its former maritime importance. Ship docks which once extended into the channel of the Merrimack River are long gone. Formerly shipyards are now the site of the waterfront parking lot. Now, mooring, storage and maintenance of motor and sailboats contribute a large part to the city's finances.

So, is Newburyport the birthplace of the U.S. Coast Guard?

The Custom House, a downtown Maritime Museum, proudly boasts so on its website: Newburyport is the birthplace of the U.S. Coast Guard and our museum is proud to honor the brave men and women serving our country and protecting our waters. Various Coast Guard events and demonstrations take place at the museum. Also, a Coast Guard station oversees boating activity, especially in the sometimes dangerous tidal currents of the Merrimack River. 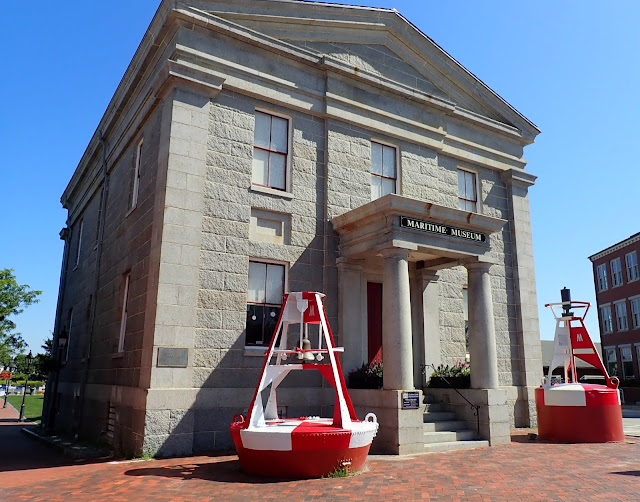 Supporters have noted that the cutter, Massachusetts commissioned in Newburyport in 1791, was the first vessel to enter active service under the U.S. Revenue Cutter Service, which later became the U.S. Coast Guard and that this makes Newburyport the official birthplace of the USCG.

However, according to the Coast Guard's website, up to three other cutters may have been launched before the Massachusetts which was among seven cutters launched in in the same year. One day, we'll visit the U.S. Coast Guard Museum in new London, CT, on the grounds of the U. S. Coast Guard Academy for a more definitive answer.

Despite its former prosperity, downtown Newburyport fell into disrepair in the 1950s-60s as strip malls took away from local business and more cars were being driven on major highways to shopping in larger cities like Lawrence and Lowell, MA. 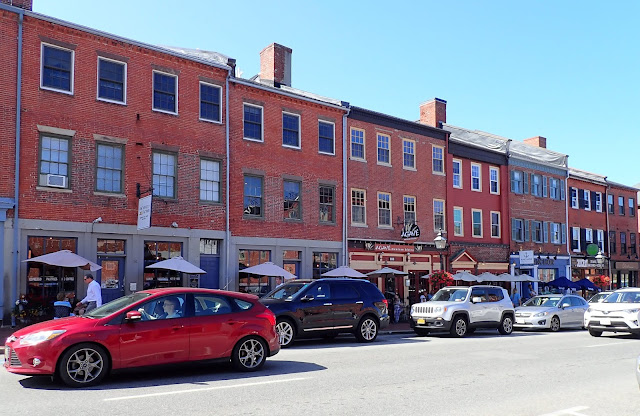 The historic downtown was in danger of being demolished with federal monies used for hotels and stores and less historical buildings. The city reconsidered the plan and signed a federal grant allowing it to keep most of the historic architecture. Renovations and restorations in the 1970s went on first on State Street and ended along Inn Street with the creation of a pedestrian mall. 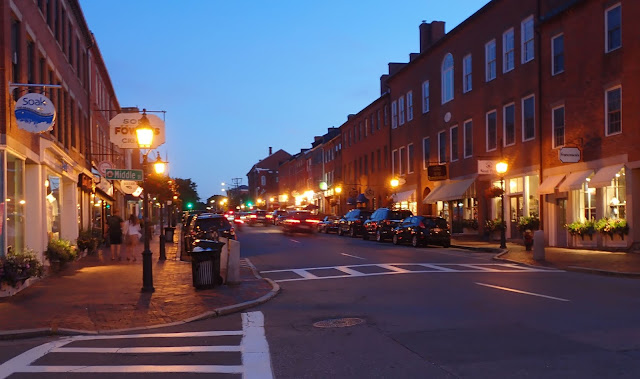 Preservationists cite the city as an example of how to maintain a city's architecture and heritage, while having it remain functional and livable. 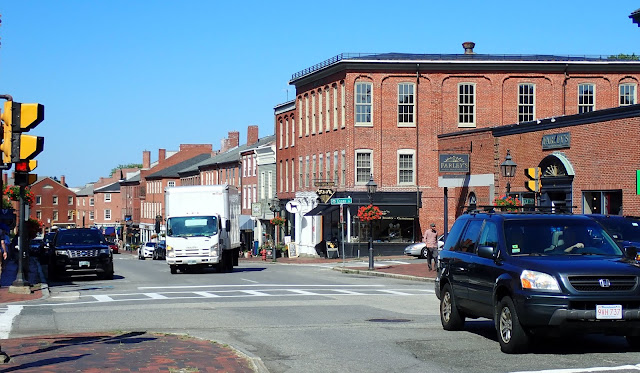 Newburyport also includes part of Plum Island, an 11-mile long barrier island named for the wild beach plums that grow on its dunes. It’s a popular destination for beachgoers, walkers, and birders. 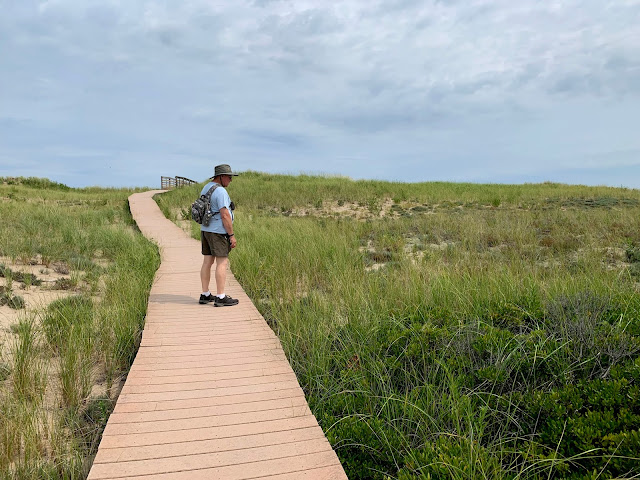 Plum Island is within the Parker River National Wildlife Refuge and is well-known as a nesting area for piping plovers, an endangered species of shorebird. This has given the island an esteemed reputation among birders and conservationists. A group of bird watchers were leaving as we arrived and we saw a large group of swallows in the marshes. 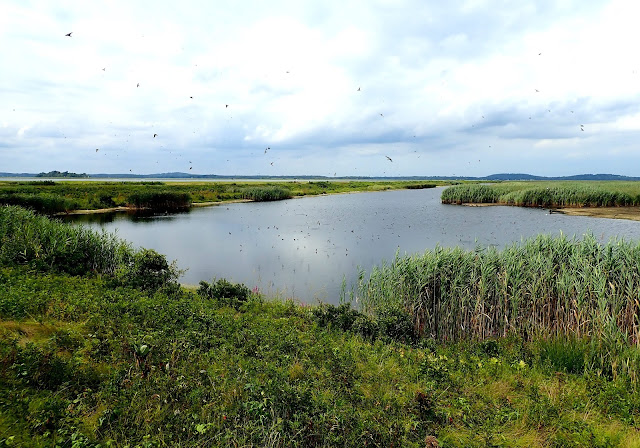 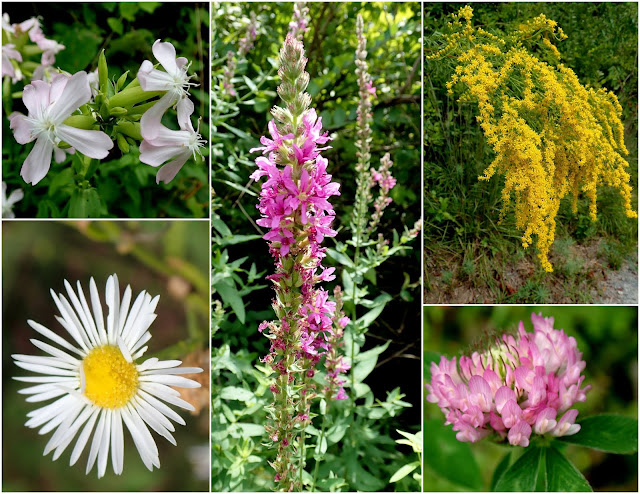 While there's an admission fee, we got in at no cost thanks to our National Parks and Federal Recreational Lands Senior Pass (U.S. citizens or permanent residents 62 years or older are eligible). We each bought one in 2011 when we lived in VA for use at nearby Chincoteague Wildlife Refuge. Then, it was a bargain price of $10; in 2017, the cost soared to $80 (yikes!). 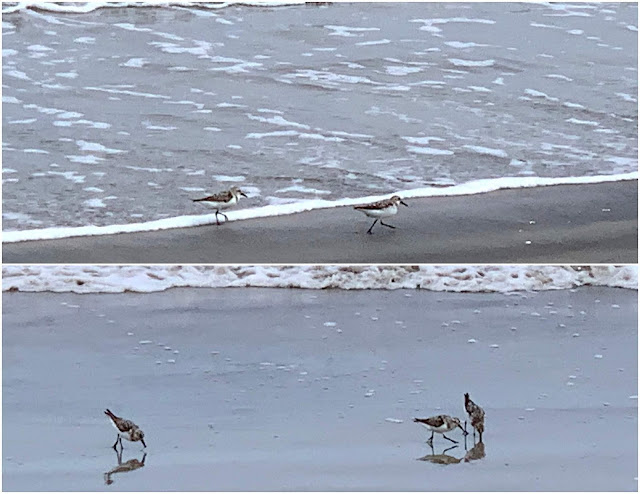 We watched numerous sanderlings along the shoreline as the tide rolled in and out. Their black legs were in constant motion as they ran back and forth on the beach, picking up and probing for tiny prey left in the wet sand left by receding waves. Aside from the sanderlings, and a few beachgoers, the rest of the beach was relatively empty, possibly due to a forecast of mid-afternoon thunderstorms. 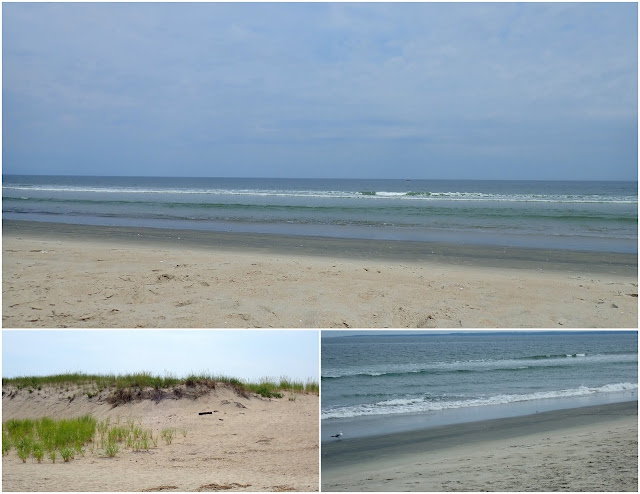 Leaving the refuge at lunchtime, we headed to Bob Lobster, a popular fish market and seafood shack on the turnpike connecting Plum Island to Newburyport. Had the weather been less threatening, we would've enjoyed the outside marsh views. But we sat indoors. and each had a Bob Lobster roll served with a light dressing of mayo and piled onto a top-split hot dog roll. The lobster roll is a favorite New England summer treat. Unlike another summer treat served on a hot dog bun, it's a lot more costly. 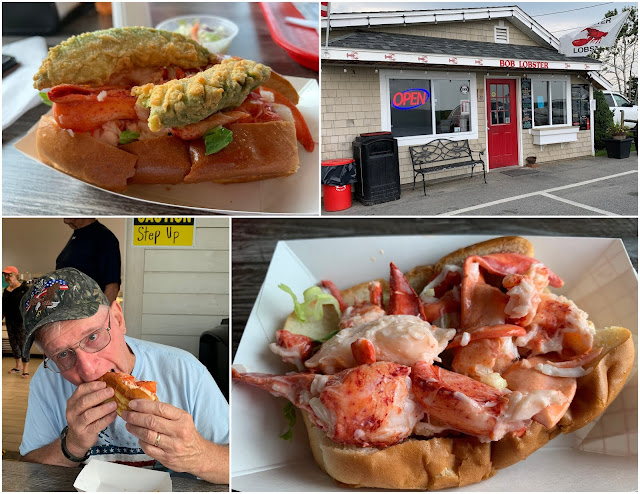 Lucky for us, the downpours, lightning, thunder and a tornado watch held off until we returned to our lodgings at the Compass Rose Inn, a lovely Newburyport B&B. 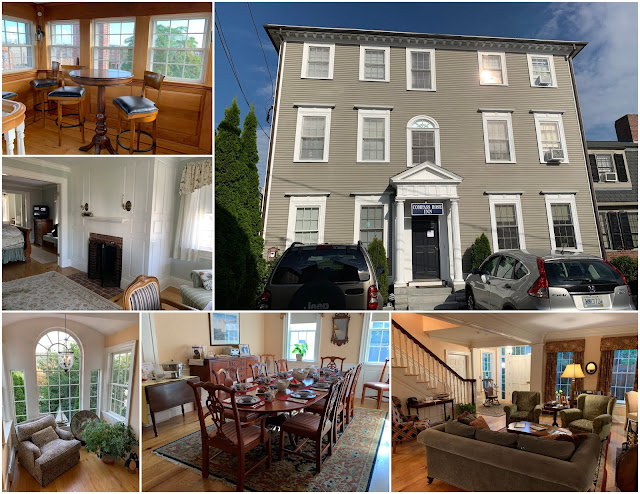 We enjoyed celebrating our anniversary with a couple of New England road trips this year. Thanks for tagging along.
Posted by Beatrice P. Boyd at 7:00 AM

Wow what a historically interesting and gorgeous town dear Dorothy :)))

thanks for the details about boatbuilder small city

these images are magnificent and reveal the inner beauty of town splendidly :)

you stayed in such a beautiful place my friend and food looks appealing
once more wishing you happy returns of the day friends ,may you guys see more joy ,health and prosperity in life ahead ,amen!

I am always happy to hear old buildings have been preserved. I think it is important to save them, USA just tears down and rebuilds a lot... here if you want a home on the golf course, they just buy one for 500,000 and tear it down and build a bigger one

Great post! When we are in New England I feast on lobster rolls as well. Much as I love hot dogs, the lobster rolls beat them out every time. I love hearing your adventures and getting a history lesson along with them.

What a great place to visit and I always enjoy staying at a bed and breakfast. Also, love the look of that lobster roll .

I couldn't get my eyes off those lobster rolls! What a beautiful place you visited, the pictures are so summery!

Where else could I get a maritime history lesson, a look at the local nature scenery, and have my mouth water while I was looking at a scrumptious meal? Nice post.

My father's family originally hailed from the Boston area … as did my BFF. These images and your backstory make me want to jump in my aging Camry and hit the road! Like Sandra, I appreciate how preservationists are looking after those historic buildings.

A lovely town, and the nature is pretty!

What a great road trip . There are so many interesting things to see and do.

Fascinating post about Newburyport. I got there every now and again. It’s a great place to visit, isn’t it? Happy September hugs Erika

Thanks for introducing me to another wonderful place that I knew nothing about. The photos are fantastic (and that lobster roll looks extremely tempting).
I applaud the preservationists for saving the historic downtown!

When I first got married, we lived in Amesbury, right near Newburyport. Our daughter was born at Anna Jaques Hospital in Newburyport. It is a beautiful area and I love Plum Island. Glad you had a nice visit.

Wonderful sights and wonderful food. You two know how to have a good time, Being landlocked I always enjoy seeing the things along the coast. My oldest son would have eating that lobster in seconds.

What a beautiful and interesting place to visit!

What a beautiful waterfront town! I just put it on my list of places to visit, once our road trip to New England happens. Kudos to those who fought to keep the historical buildings, and keep this wonderful historic downtown core.