We're currently on a "southern" U.S. road trip from NH to FL and posting about sites seen & foods sampled along the way. This post is about a stop in Atlanta, GA.

Previous posts have covered more than one place seen on our current travels. This post deals with only one seen at the Atlanta History Center (AHC), a history museum and research center in Buckhead, a residential district of Atlanta, GA. Founded in 1926, the AHC contains one of the largest U.S. collections of Civil War artifacts, which (admittedly) we didn't fully explore.

That's because the most spectacular exhibit is what we went to see — The Battle of Atlanta cyclorama, a 132-year-old hand-painted oil-on-canvas work. Believe me, this is not only a very impressive work, it's also a very immense work at 49 feet tall, covering an area of 16,000 square feet and weighing almost 10,000 pounds (6 tons and longer than a football field). This is only one of two functioning cycloramas in the U.S. — the other is The Battle of Gettysburg cyclorama at Gettysburg National Military Park in PA. Atlanta's was originally larger, but additions to Gettysburg's, as part of a restoration effort, made it larger. (We visited the PA cyclorama a few years ago and were similarly impressed back then.)

We entered the painting rotunda through a 7-foot-tall tunnel entry that passes beneath the cyclorama, then took an escalator to the 15-foot high stationary viewing platform for a full 360-degree view of the painting. A 12-minute introductory film projected onto the painting's surface, detailed historical interpretations of the cyclorama over the years.

What you are about to see — The Battle of Atlanta cyclorama — is not history. It is an artifact of art, entertainment, and messaging. It is about the past. German artists created the panorama 22 years after the battle. It was intended for Northern audiences interested in the Battle of Atlanta, July 22, 1864. Its creators made it for people who could and would pay to see it. (Atlanta History Center)

Back in the 1880s, The Battle of Atlanta cyclorama painting was equivalent to today's virtual reality. Created over five months by 17 German artists at the American Panorama Company in Milwaukee, it debuted in Minneapolis, WI in 1886. While cycloramas could depict any moment in history, for a few years in the 1880s, the timing was right for Civil War battle scenes. Painted 22 years after the Battle of Atlanta, the battle wasn't a Confederate victory and the painting depicted the battle as a heroic Union victory, which appealed to Northern audiences. But, when the painting relocated to Atlanta in 1892, it was modified and advertised as “the only Confederate victory ever painted” to appeal to Southern audiences. (Most of these incorrect changes were reversed in the 1930s.)
How they began: British painter Robert Barker patented a cyclorama design in 1780.
Within 20 years cyclorama buildings appeared in Europe and America as a popular form of entertainment.

They were stretched around the interior of specially-built circular buildings. Early scenes depicted cities and landscapes; later ones showed battle scenes, natural disasters, and Biblical scenes. Visitors paid 25-50 cents, climbed two sets of winding stairs, and stood on a central platform. This put them in the center of the large paintings which often included landscaped foregrounds, music and narration for a 3-D effect. Viewers had the sense of being immersed in the scene. (These were the IMAX of their time.) At their peak, up to 40 cycloramas were on tour in the U.S. Only densely populated cities provided enough profits to offset the costs. Most were bankrupt by the 1890s and many either discarded or destroyed. Popularity faded even more in the 1900’s, due largely to the rising popularity of moving pictures.

Imagine being able to buy the The Battle of Atlanta panoramic painting for only $1,100. That's what GA businessman Ernest Woodruff did in 1893 at public auction after it had travelled a Midwest circuit until its promoters declared bankruptcy. Later, the city of Atlanta offered land to house the painting and its building which were moved to Grant Park. Despite being the site of Confederate reunions and memorials, it continued to lose money and was deteriorating from rips and water leaks.
In 1921, the city built a new brick and steel building to house it in Grant Park and added a recorded tour. Between 1934 to 1936, the painting underwent major restoration. It was reinforced, retouched and converted back to the Northern victory it depicted. Sculptors funded by the Depression-era Works Progress Administration (WPA) included shrubbery, cannons, tracks, and soldiers creating a diorama foreground that fit in perspective with the scale of the painting. Four to five faces are repeated among the 128 figures; artists crafted faces in their likeness. (The clay soldiers were subject to deterioration and later replaced with plastic models.) 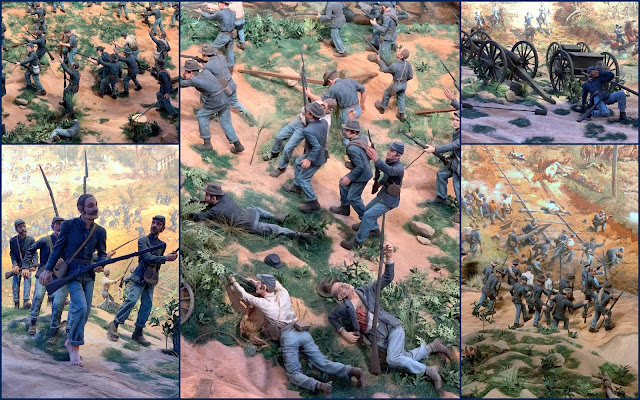 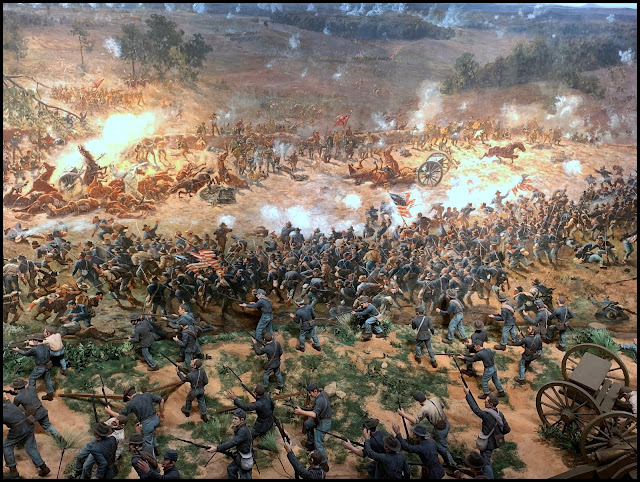 In December 1939, Atlanta hosted the premiere of Gone With the Wind, the film based on Atlanta resident Margaret Mitchell’s bestselling novel of the Old South. (Sadly, back then, attendance was "white only" which excluded the film’s African-American performers; not surprising as among the 6,000 images in the painting, only one black.)

Actor Clark Gable, who portrayed Rhett Butler, was in town and, after viewing the cyclorama, reportedly said that the only way it could be better would be "If I were in it.”
And, so he was added in after then Atlanta Mayor William B. Hartsfield had one of the diorama’s original artists redo a figure of a dying Union soldier, adding a face painted to resemble Gable's film character. Oddly enough, this revised figure which appears to be smiling smirking in death and has become one of the most photographed figures in the diorama (possibly as it's specifically mentioned during the intro talk). 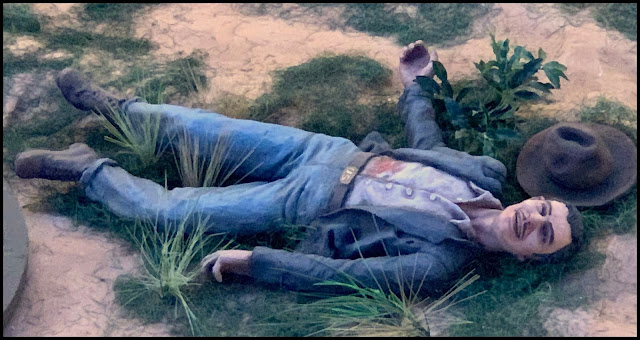 From 1979 to 1982, an $11 million restoration that cleaned the canvas and restored paint colors again saved the painting from deterioration. Between 1986 to 2010, attendance dropped 80%. The 1921 building was too small for the large painting, plus the building's fire and climate systems were unreliable. In 2011, a Task Force of city officials and community leaders recommended a move to the Atlanta History Center. Too years later, a $10 million endowment and a $36 million fundraising effort led to construction of a 25,000-square foot building and another restoration and relocation began.

In February 2017, engineers and conservators moved the five-ton painting on two custom-made 45-foot steel scrolls. It was split along two major seams and spooled onto the rolls. A team of 200 architects, engineers and conservators restored the painting to its original 1886 appearance. The $35 million renovation also restored the painting's skyline and recreated sections removed to fit it into the 1921 building.

Two years later, in February 2019, The Battle of Atlanta cyclorama reopened, fully restored and in its new and at last permanent home, 127 years after it first debuted in Atlanta. 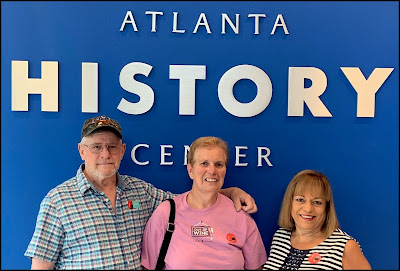 If you're ever in Atlanta, GA, you might also consider a visit to the Atlanta History Center. And, if possible, also visit The Battle of Gettysburg in PA.

These were two one-of-a-kind experiences which we're very glad to have seen within the past few years.

BIG thanks to my GA cousin, Kathie, for also wanting to go and see this cyclorama and for also being the designated driver.
Posted by Beatrice P. Boyd at 7:00 AM

It reminds me of the cyclorama of the Battle of Napoleon at Waterloo(Belgium); much smaller in scale, of course, but equally impressive.
I have a soft spot for circular structures (rotunda,) whether of public buildings like the museum in Atlanta, or residential ones.

a lot of amazing talent to get these giant paintings painted on those walls. I have never seen one, only photos.

Just catching up with you, another great post learning so much from your tour and seeing places that I can only dream of. Thanks for taking us along with you.

I've been to the one in Gettysburg several times and it's time to go again.... this post made that thought come to the forefront! We might go to the Atlanta area again someday as my youngest sister lives nearby.
Sounds like you are thoroughly enjoying this trip!

I am enjoying your travels and this post is no exception. Another place I need to visit!

This was so amazing to see and to hear about. I didn’t know that it was out there. Big is the magic word here. Enjoyed see it with you.

Looks amazing! Thank you for sharing this. I have been to the one in Gettysburg and would love to check this one out too one day.

That is so beautiful, quite impressive! I’m really enjoying your adventures!"

Thanks for that tour and info on the Cyclorama. I was there once many, many years ago. I wasn't even married then so you know it was ages past. I remember seeing the painting and all the figures and was fascinated. Haven't been back since.

Very impressive to see and learn about.
Thanks for sharing.

I'm a lover of cyclorama. My favorite is the one in Gettysburg. A person could spend many days looking at either of these and still not be able to absorb it all.

thank you for sharing something outstandingly unique and profound from the history !

i am amazed to see these HUGE PAINTINGS ,the work of artists is inspirational indeed

i think i have seen this movie when i was little

I have been to Gettysburg but don't remember seeing a cyclorama there so this is new for me.Wow. It is fascinating and I loved the story behind them. They would make a great part of a story set back in the time of their popularity. Thanks for sharing.