We're currently on a "southern" U.S. road trip from NH to FL and posting about sites seen & foods sampled along the way. This post is about a stop in Knoxville, KY.

Always on the lookout for interesting attractions, we found three at this KY destination and as a bonus, they were all FREE (even better). 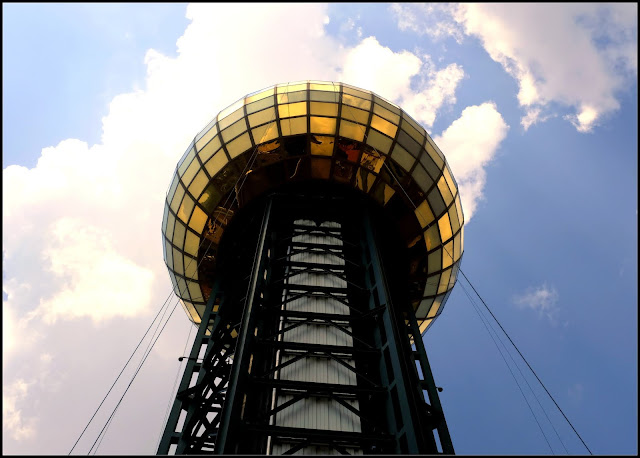 Yes, it looks like a giant sun, and that was the concept behind construction of the Sunsphere that's recognizable from anywhere in downtown Knoxville  TN. It's become the city’s symbol, and is featured on team logos, postcards, stamps, and DMV licenses.
Built in 1981, the 266-foot high hexagonal steel-truss structure, topped with a 75-foot gold-colored glass sphere was the symbol of the 1982 World's Fair that ran 184 days here in 1982 from May-October. Formally called the Knoxville International Energy Exposition the fair's theme was Energy Turns the World.
The 1982 World’s Fair was constructed on 70+ acres between downtown Knoxville and the University of Tennessee on former railway grounds. It drew more than 11 million visitors making it one of the most popular world's fairs in U.S. history. It included exhibits from 22 countries.The site is now a public park, World's Fair Park, near Knoxville's convention center and adjacent to the University of Tennessee's main campus.

The fair’s “energy” theme debuted many then) cutting edge technologies, including the first green homes, alternative fuel vehicles, Texaco’s “pay at the gas pump," 1-hour photo processing, and an early version of the cordless phone. The most famous inventions presented at the fair included touchscreen technology (precursor to smart phones), Rubik’s cube and a new Coca-Cola flavor, Cherry Coke. The TN fast food chain Petro's Chili & Chips opened at the fair and now has locations around the state. 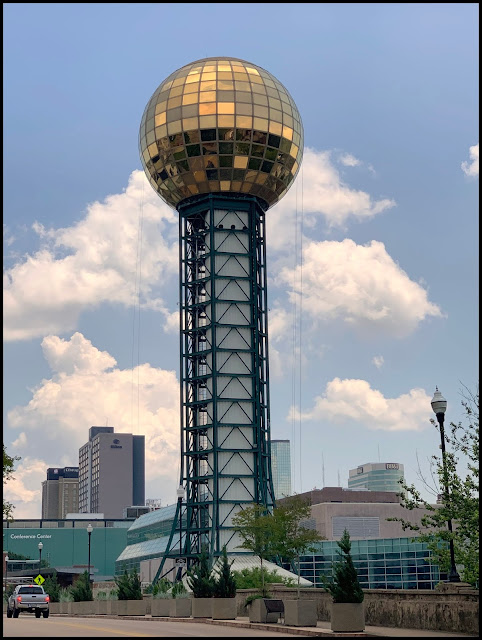 The Sunsphere weighs 600 tons and features six double steel truss columns that support the seven-story sphere. It has 360 glass panels layered in 24-karat gold dust, cut to seven different shapes. Each pane cost an average $1,000 at the time of construction. During the World's Fair, the tower color was blue matching the sky; it's currently forest green. 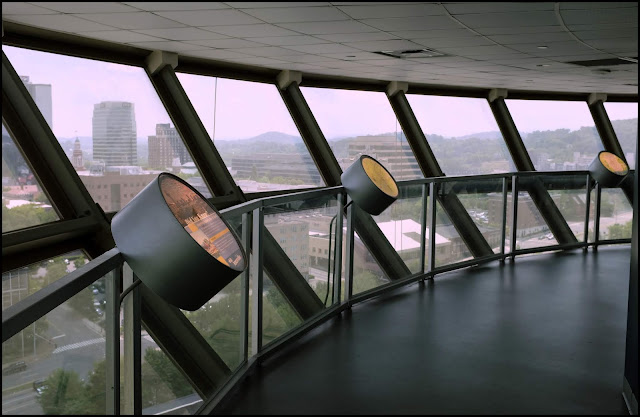 The Observation Deck is on the fourth level and offers a full 360-degrees of the original fairgrounds, downtown Knoxville, the Tennessee River, the University of Tennessee, and the Smoky Mountains. When the Sunsphere opened, an elevator trip to the Observation Deck cost $2. Today it’s FREE.

Soon after the fair ended, the Sunsphere closed to the public. A brief 1999 reopening didn’t last. After extensive renovation, the Observation Deck reopened to the public in May 2014. The Sunsphere is one of only two remaining structures from the 1982 World’s Fair. The other is a man-made pond from the Tennessee amphitheater (seen upper left).

If you’re in downtown Knoxville, do try this must-see (and don't forget) free attraction. As a plus, when we visited the observation deck, there was no time limitation.)

The Knoxville Museum of Art (KMA) below as seen from the Sunsphere observation deck is on the site of what was the Japanese Pavilion at the 1982 World’s Fair. 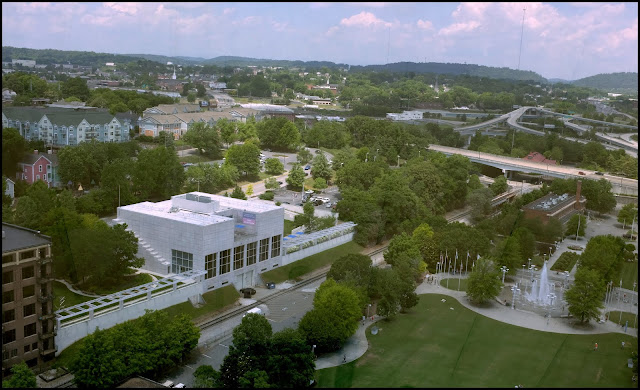 The museum opened in 1961 as the Dulin Gallery of Art, but limited space, plus a lack of security and climate control prevented accreditation by the American Association of Museums. The new 53,200-square-foot facility, which opened in March 1990, was renamed the Knoxville Museum of Art and has since received accreditation. Like the Sunsphere, it's also free to visit. (Donations are gratefully accepted.) 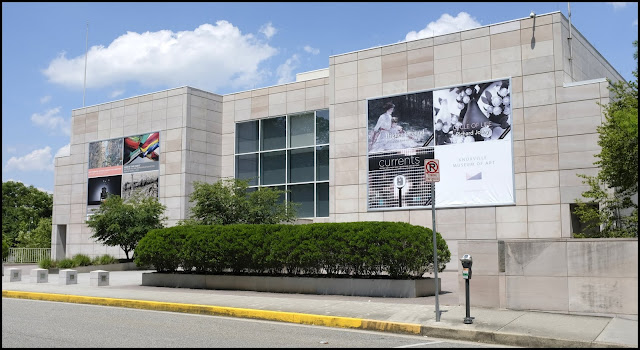 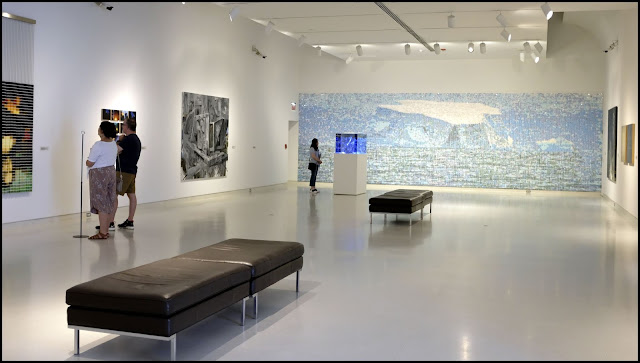 The exhibits are focused mainly on Southern Appalachian culture and artists from the East Tennessee region. Major artists from outside the region who produced significant work in the Knoxville area, such as Ansel Adams and Elliot Porter are also highlighted. 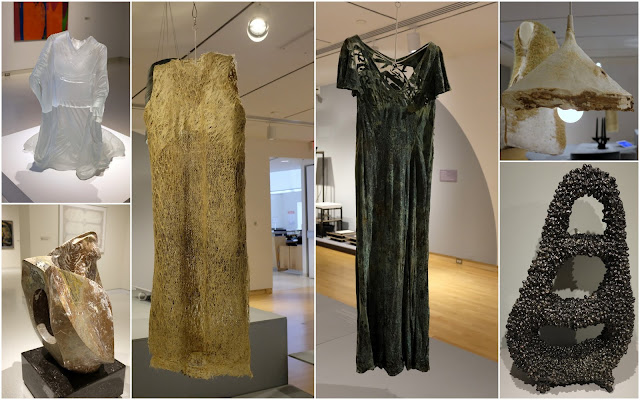 A separate room houses what is the museum’s most significant and largest painting, the 28-foot mural, History of Tennessee, a 300-pound oil-on-canvas work, painted by New York artist Marion Greenwood. The work has survived controversy and vandalism in its 60-year history. In 1954, the University of Tennessee commissioned Greenwood to create a mural for the new University Center ballroom. Greenwood wanted the painting to pay tribute to the state’s musical heritage. In the day, she traveled throughout the state to gather ideas and painted at night using instructors and students as models.

Also called the “Singing Mural” this mural is considered the most important painting in the history of East Tennessee. Painted on a continuous 30-foot length of canvas, nearly as long as a tractor trailer, it features 28 people engaged in song and dance, depicting the musical heritage of the state. The left side portrays Mississippi River jazz and blues and slave spirituals of West Tennessee. The center shows a country hoedown with dancers and musicians. The right side features the religious-based Appalachian music of East Tennessee.

Greenwood considered it to be her best U.S. work. Unveiled in the University Center’s ballroom in June 1955, it remained on view for 15 years. (However, the former UT president found it distracting and had it a curtain in front of it before he spoke.)

The inclusion of African Americans in a mural dedicated to the history of Tennessee was controversial in the 1960s when UT students objected to its portrayal them. In May 1970 student protests, the painting was vandalized with paints and solvents. After restoration and new threats, it was kept under guard and in 1972, paneling covered it for 34 years until a short-lived public viewing in 2006. In 2010, the University Center was slated for demolition and the new student center design didn’t include a suitable area for the mural. A national conservation firm was hired to clean the mural, remove it and store it until it found a permanent home. In 2014,  the UT and the KMA reached an agreement through which the university retains ownership of the mural, but has placed it in the KMA’s care on long-term loan.

The Knoxville Trolley is one of the city’s most popular features and it's completely free for everyone to ride, residents and visitors alike. Three trolley routes — the Blue, Green, and Orange lines — serve downtown Knoxville and the UT area with maps available at locations throughout downtown. While not actual trolleys, these hybrid/propane powered buses are painted to look like trolleys and are a great likeness. 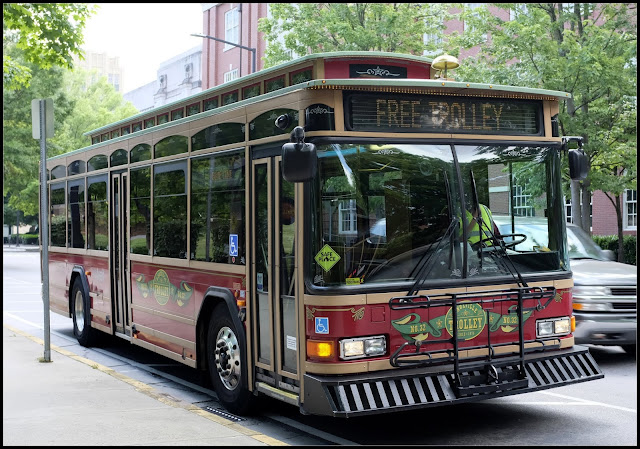 The trolley, also called street car, began here in 1876. The earliest ones were pulled by horses and mules as the city’s first form of transportation. By 1890, electricity was used for new trolleys and by 1910 there was an estimated 42 miles of trolley lines in Knoxville carrying over 10 million passengers annually. By 1947, the trolleys gave way to gasoline powered models. In 2003, the system was converted to propane power. Remains of the old electric trolley system area are still being found below downtown streets  as they were paved over rather than removed years ago. 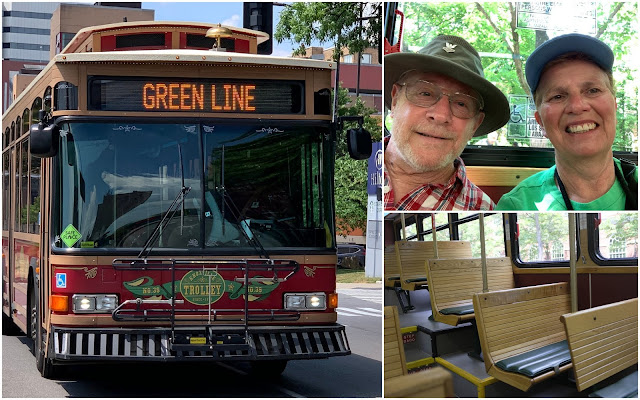 We rode all three trolley lines and had a great afternoon exploring Knoxville at no cost. The trolleys run daily, but not on Saturdays when there’s a UT home football game.

And, on our trolley rides, we also found another free downtown Knoxville attraction, a weekend Farmer's Market. 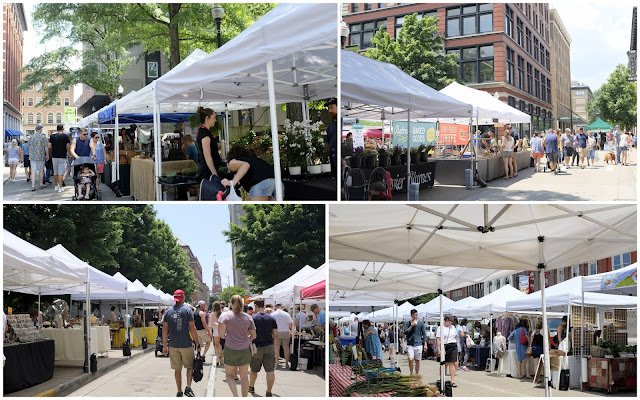 There was another (also free) attraction in downtown Knoxville, a Farmer's Market. We walked through it very briefly as it was a fairly warm hot day. These youngsters sure had a greatly to cool down at a pop-up fountain. 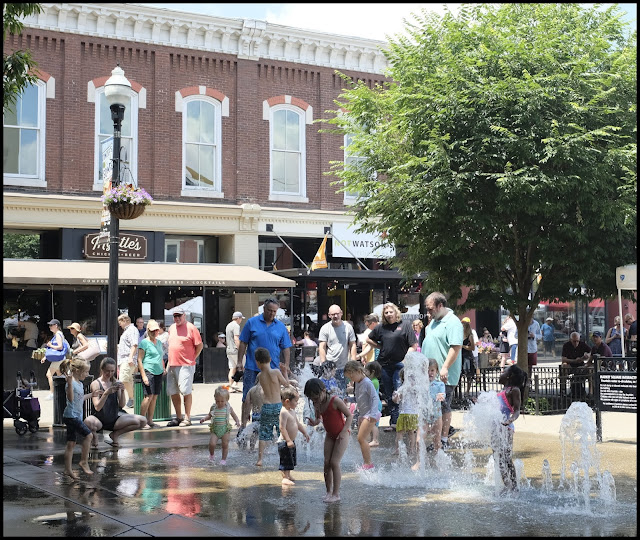 Thanks, as always, for virtually traveling along with us. We've been reading and appreciating all your comments. We're having a great time seeing more of the U.S. on this trip and hope that you're enjoying it too.
Posted by Beatrice P. Boyd at 7:00 AM

I love travelling along with you!

I love travelling to places I haven't even heard of with you. Free is best :-)

I knew about the Sunsphere from before but I had no idea it had re-opened. Hope you can dodge the rain that has pelted western NC as you travel from Knoxville.

Free is so good! Would love to visit this city. Ellen would love the trolley =)

excellent free finds! Good job, and thanks for sharing!

I know I'm bad lately, but I find that most travel blogs are not my thing. I apologize profusely, but I can't help it.

Knoxville has changed a lot since I was there.

that sunsphere is awesome and it does look like a sun... would like to play in the water minus the kids and see the museum with all the art and ride the trolley to... Knoxville looks like a really fun place to visit.

Great post, so interesting! I liked all your photos but the Singing Mural really caught my eye today. Continued happy traveling!

I was in Knoxville for a couple of days back in 1979. There was no sunsphere then. Nor did I do a lot of sightseeing. It looks great, and since my cousin lives there I should go back and check it one of these days. Where to next?

Thanks for the tour of Knoxville. I have been to Tennessee but I never got to Knoxville. The story of the mural is amazing. Some people just can't forgive and forget.

Free! Love all those free things! I was one of those 11 million visitors to the World's Fair! Nothing free in those days!😄 I really love the way they built that trolley to look like a real trolley. And that it is free!Enjoy your trip!

Wow i am loving these wonderful trips with you my friend!

special thanks for not giving just virtual tour but information !

and loved images too
you both look a lovely happy blessed couple!