While on a (mostly) southern states road trip traveling from New Hampshire to Florida, we're sampling foods along the way. It's part of the road trip fun for us. Here's some recent dining experiences in Charleston, SC. 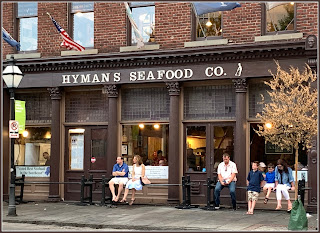 Hyman’s Seafood on Meeting Street is a family-owned seafood spot, deli, general store spread over most of a city block in buildings dating to the late 1890s. The popular eatery has been at the same location for nearly 130 years. Dining here is casual place; prices are lower, than other city seafood restaurants. The signature dish is crispy flounder, which we didn't try as it's not our favorite fish, but there's plenty of other seafood choices on the menu. If you like seafood, as we do  you won’t be disappointed. 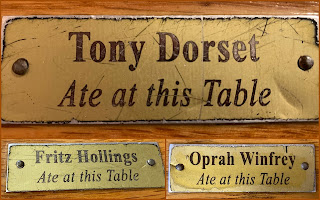 Seating is on a first-come, first-served basis, no advance reservations. We joined others out front to wait for our chance to dine at this tourist favorite. While waiting, we chatted with a local couple who said they dined here often, but avoided the busiest times, which seem to be any night. Once seated, we checked out plaques that showed famous folks who had dined at the same table. Ours featured NFL player Tony Dorsett, former SC Senator Fritz Hollings, and talk show host Oprah Winfrey. If you go, be sure to try the hush puppies, which were the best we've ever had (see Grenville's smile below). Notice the two spoons as we shared that key lime pie dessert! 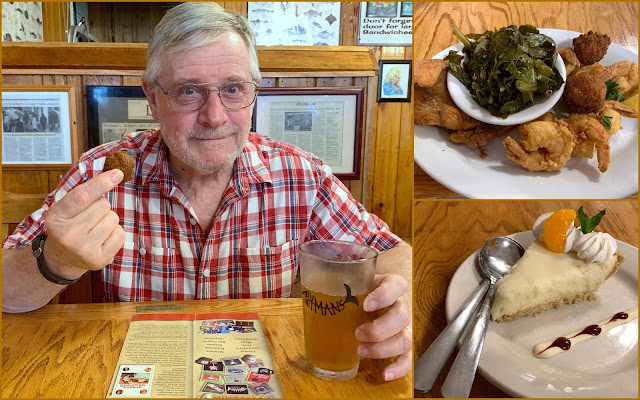 Hyman’s is open 360 days a year, 7 days a week, closed only for Jewish holidays, Thanksgiving, and Christmas. The restaurant has been voted best seafood by Southern Living Magazine’s reader’s poll for several years. There may be another reason too as a prominent sign boasts two rules: Rule #1 the customer is always right and Rule # 2 when in doubt, refer back to Rule #1. 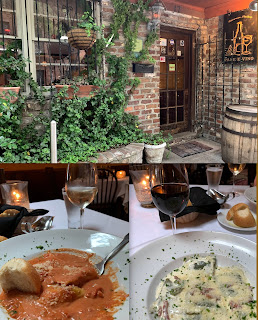 Pane e Vino on Warren Street, is a downtown trattoria, located just off Charleston’s busy King Street on a much quieter, off-the-beaten street. Entering the restaurant, we passed by a large patio hidden behind an ivy-covered wrought-iron fence. It’s larger than the restaurant’s main dining room. The interior was very comfortable on a warm SC evening with a dimly lit and cozy atmosphere.

For a restaurant with pane (bread) in its name, there was a lack of Italian breads in the basket, exactly one type. Our dinner choices were stuffed ravioli; mine was stuffed with a pureed spinach and ricotta blend in a light smoked prosciutto and asparagus cream sauce. Grenville chose a lobster-stuffed version.  Both were good, but no side salads were included with dinner, which was disappointing. The restaurant was near our hotel. We should have walked further along to nearby King Street which offered more dining choices. 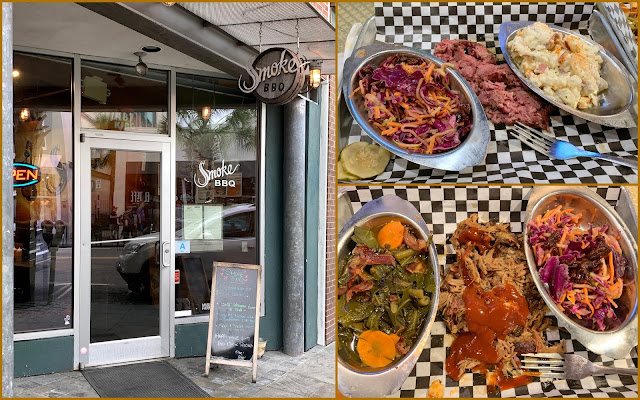 Smoke BBQ on upper King Street started with a food truck business that's expanded to two Charleston storefront locations. We had read that the chef-owner treats smoked meats as gourmet-level fare, and we believe it after eating here. Apparently so do others as it was very crowded the afternoon we were there.

The menu is simply printed on a single page with several sandwich choices, some wings, meat platters, and a salad. Food is served on small metal trays (easy cleanup). The BBQ was served between the sides in the above photos. My choice was pulled pork and Grenville had house-smoked pastrami. Our meal choices came with two sides as we both selected the slaw, which as more of a salad. It was lightly dressed and included shredded carrots, apples, and pickled red cabbage and pecans. Fresh and crunchy, it was a welcome break from mayo-based slaws. Service was fast and so friendly (it's a Southern "thing"). Every employee stopped by to see if everything was to our liking, which it was and very good as well. 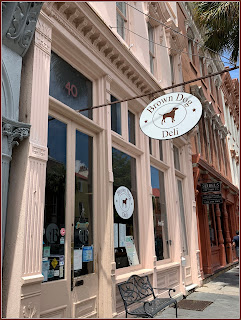 Brown Dog Deli on Broad Street is a traditional deli, surrounded by attorney and real estate offices and art galleries. This small unassuming restaurant was very busy the afternoon we ate there. There's a  bench where folks can wait for take out. Indoor and outdoor seating is available. While waiting for lunch, it was fun looking at the inside wall art which had musical memorabilia and a selection of albums. The outdoor patio has open air and covered tables and is decorated with hanging lights, a bubbling fountain, and colorful plants. (We didn't know about the patio until after being seated.)

The menu features traditional deli favorites, like hot and cold sandwiches, wraps, salads and hot dogs. The hot dog menu has basics like traditional Chicago dogs, chili dogs and pastrami dogs in addition to some Brown Dog Deli specialties. There's also a build-your-own hot dog option which lets diners start with a plain hot dog and top it however they like. 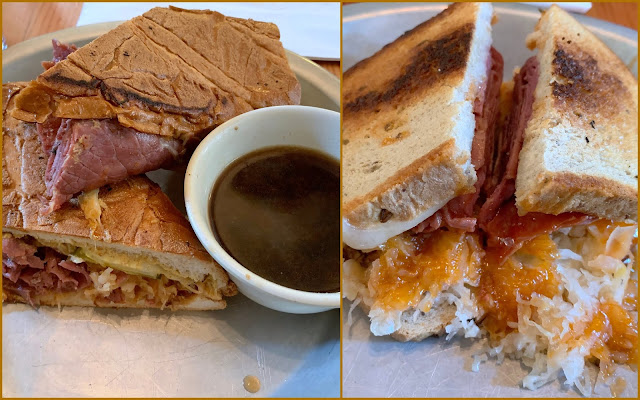 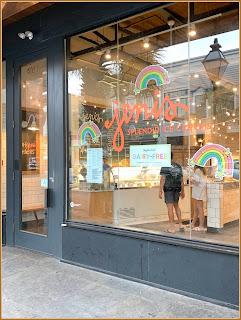 Jeni’s Splendid Ice Cream on King Street features artisan ice creams using whole ingredients and dairy from grass-pastured cows vs. synthetic flavorings, emulsifiers, and stabilizers. The company is headquartered in Columbus, OH, home of its founder, Jeni Britton Bauer for whom the company is named. Currently, Ms. Britton is possibly the most notable ice cream authority in the world. The Wall Street Journal has called her cookbook “the homemade-ice cream-making Bible.”

Jeni’s operates 33 “scoop shops” in 10 cities, but there’s only one in SC. Lucky for us, it's in Charleston. A first taste of these rich, creamy flavors convinced us that the lines we had seen the night before were worth the wait. We returned the next night at an earlier hour with no lines and could “sample” before making our choices. 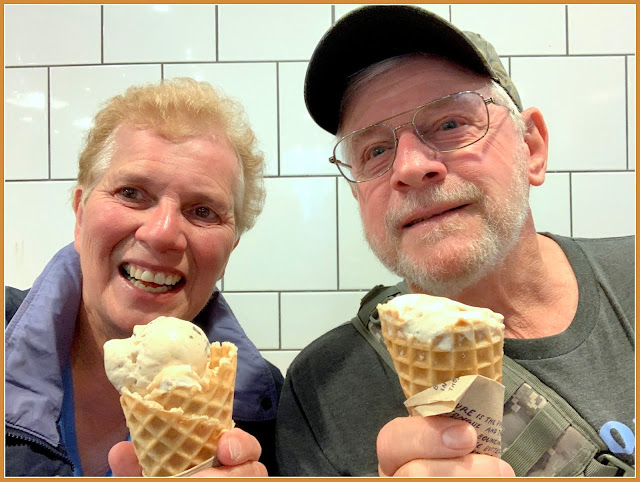 But, if there’s no Jeni's Splendid Ice Cream shop near your location, don't worry as the company distributes pre-packed pints to over 3,000 grocery stores across the country, and also ships anywhere in the U.S. via an online e-commerce shop.

(Here's what we selected —  Salted Caramel and Salted Peanut Butter with Chocolate Flecks for myself and Green Mint Chip and Blackout Chocolate Cake for Grenville.)
Posted by Beatrice P. Boyd at 7:00 AM

wow i am enchanted by these food streets dear Dorothy :)))

i envy your WONDERFUL AND FULL OF FUN TRIP :)

i really enjoyed knowing about all the mouthwatering dishes you tasted from these food streets !

loved the icecream most ,must be amazing flavors as names are so interesting

thank you for images ,they give the idea of place you visiting and it is very cherishing to be with you in your travels

you guys look one of the most happy and lucky couple together !

have blessed journey ahead my friend!

what a mouth-watering pictures! especially the ice cream! need one for myself now ♥

i would love to eat at the seafood place and get those big fried shrimp and the BBQ place looks divine. plus the buildings are beautiful also. did not know anyone but Oprah until I read your words, and now does the sign say The frog and Penquinn ate here?

All that food looked so good. I am now hungry for a Reuben sandwich. I am puzzled though. One picture shows food on the metal trays. It appears that there is also food on the table between the trays?

Sometimes, I gain weight only by looking at dishes and desserts. This is one of those times:)

Nice tour today! I love all the delis you stopped at. I'm a fan of delis and diners! I would have ordered the flounder at Hyman's, it's one of my favourite fishes! :) I actually had to look up "hushpuppy" I never heard of that before! Grenville is definitely enjoying them!! Great photo! :)

I'd go for the ice cream.

You certainly dined in interesting and fun places, with delicious food! That last shot of you two with the ice-cream is now calling to me like a siren song. I need to ask Gregg if he would like a trip up to our local ice-cream parlor! I will be bookmarking these places for the next time we travel south :)

It all looks and sounds so good. Like other commenters, the ice cream place would be my first pick.

You have certainly eaten in some amazing places, it all looks delicious. I would have piled the weight on with all that delicious food. What a trip...

I love trying new (to me) restaurants. I think I would really like the fish place, the deli, and of course ice cream! It sounds as though you’re having a fun road trip!

Love seeing the photo of you two and your ice cream!

When we are in Charleston, we eat seafood for dinner every night and often seafood sandwiches for lunch. I'm sure you learned that Charleston measures time in two eras: "Befoah the war and Aftah the war."

Well, are you two ......weary travelers yet? Your photo of you two is so cheerful! That ice cream looks so good! Love reading and catching up on your posts and about the places you have visited! The food looks soooo delicious!!

Sounds like you are on a gourmet road trip. The food sounds delicious but I would put on too much weight.

You've visited some of my favorite Charleston stops! I wish that I had two scoops from Jeni's right now.

You two always find the greatest places for good. The shrimp and cheesecake made me hungry and jealous all at the same time.