Brunch at the Museum

We watched the Night at the Museum films recently (more about those later in the post). It would have been fun to spend a night in the NYC American Museum of Natural History, instead, we went to Sunday Brunch at the Currier Museum of Art in Manchester, NH.

The museum entrance wasn't as interesting as these two art pieces outside it. 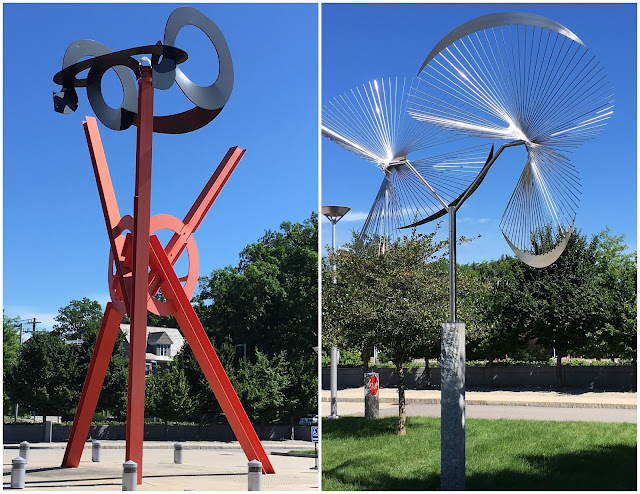 I enjoyed applying a few effects to one of them. 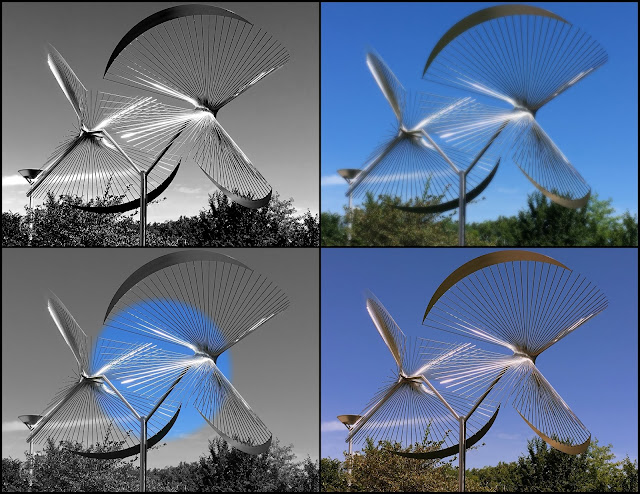 Brunch was served in the museum's Garden Cafe from 10 a.m. until 2 p.m. Attendees visited the museum before or afterwards. Live jazz music was provided by two musicians who entertained the entire time. 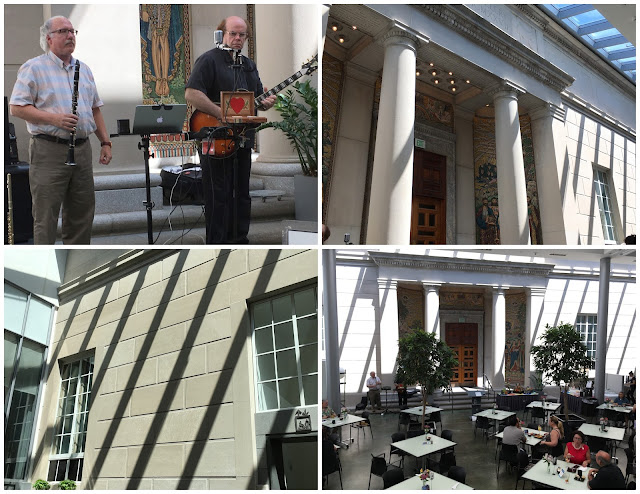 Formerly called the Currier Gallery of Art, the museum was founded in 1929 from a bequest of former NH Governor Moody Currier and his wife. It features European and American paintings, decorative arts, photographs and sculpture. 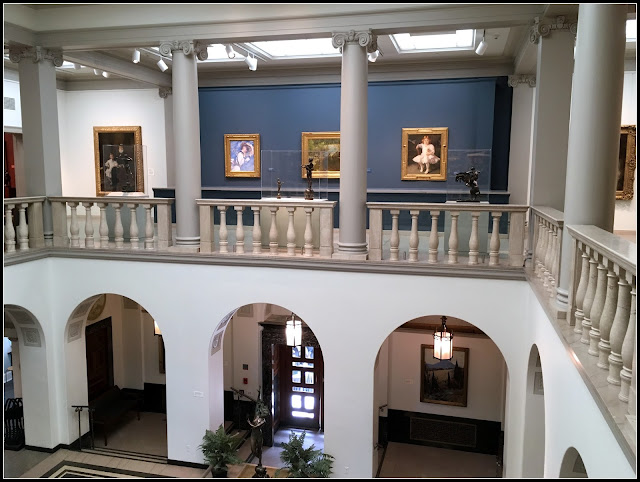 The building was listed on the National Register of Historic Places in 1979. In September 2002, the Gallery changed its name to the Currier Museum of Art. The permanent collection includes works by Picasso, Matisse, Monet, O'Keeffe, Calder, Wyeth, Sargent, and Frank Lloyd Wright. One room was dedicated to these four Monet paintings. 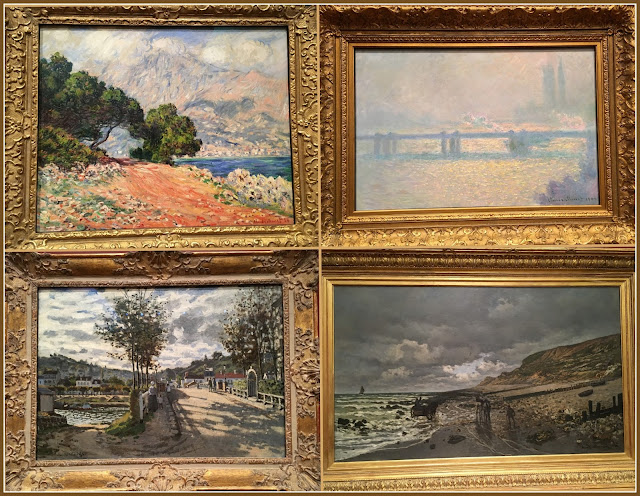 Here'e two very different portraiture styles. One can be easily recognizable as that of Spanish artist Pablo Picasso, regarded as one of the most influential artists of the 20th century and co-founder of the Cubist movement. The other portrait is by American artist John Singer Sargent considered to be the leading portrait painter of his time for his paintings showing Edwardian era luxury. (Which do you prefer?) 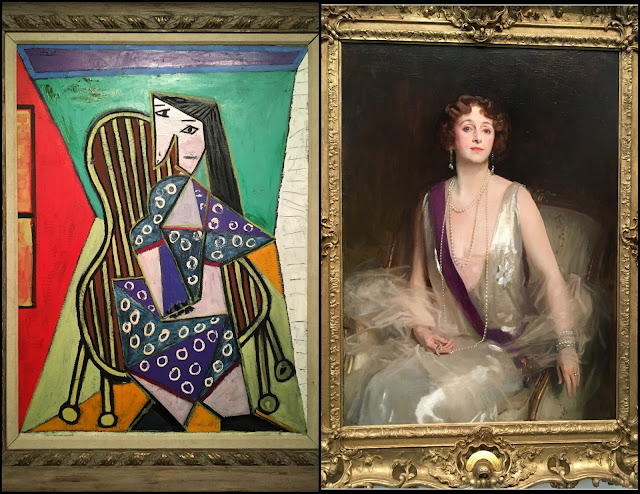 This sculpture is by Frederic Sackrider Remington, an American painter, sculptor, and writer specializing in depictions of the Old American West. Coincidentally, he was a cousin of Eliphalet Remington, founder of the Remington Arms Company, considered America's oldest gunmaker. 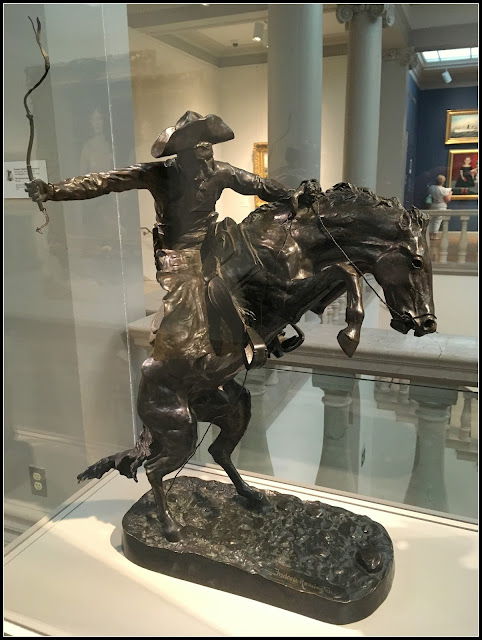 Edward Hopper was a prominent American realist painter and printmaker. He maintained a studio in Greenwich Village in NYC and spent summers in New England in Cape Cod, MA, in the town of Truro from the 1930s-1950s. 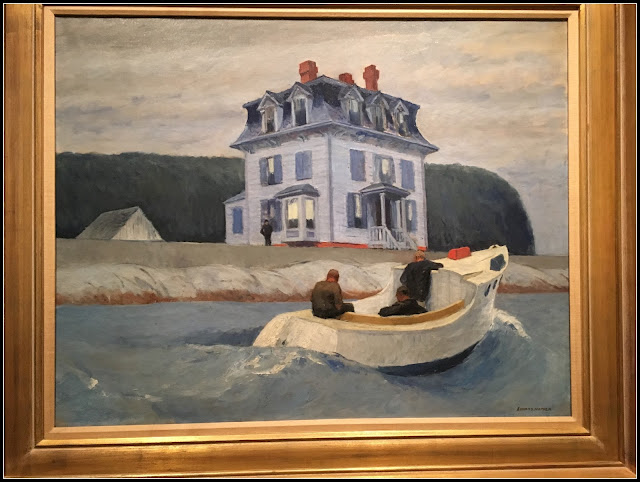 In addition to classical art, the museum also features several temporary exhibits, including contemporary pieces like BioLath by NH multimedia artist Soo Sunny Park. An entire room was filled with this art installation. It looked like a lot of wire lathe with light strings and was not especially interesting to me. 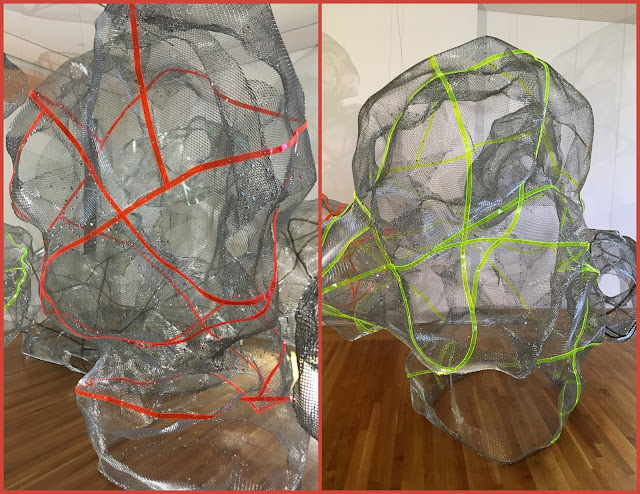 This art was far more interesting. It's not a photograph, but a very detailed, exacting and realistic oil painting. The building details and reflections were amazing in this piece. (Unfortunately, I can't recall the artist's name.) 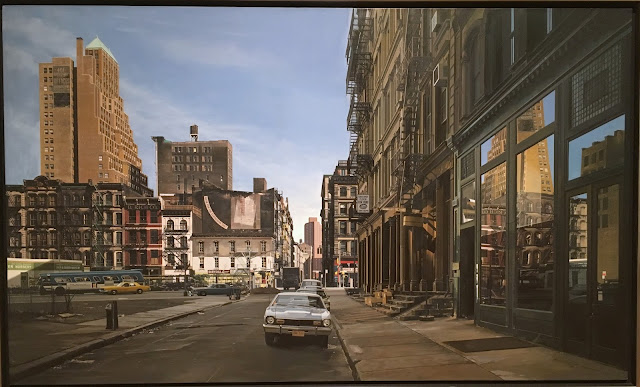 Night at the Museum (2006) - Larry Daley, a divorced father can't keep a job for more than a week and applies for a job at the American Museum of Natural History. He's hired as a night guard. Soon, a seemingly easy job turns out to be quite an adventure when an ancient tablet causes the museum's exhibits to come to life from nightfall until dawn.

Night at the Museum: Battle of the Smithsonian (2009) - After several exhibits are transferred to the Smithsonian in Washington, DC. Dexter, a mischievous capuchin monkey steals the magic tablet of Ahkmenrah, Larry teams up with his old friends (Teddy Roosevelt, Sacagawea, Jedidiah, Octavius, Dexter, Attila the Hun) and a new ally, Amelia Earhart, to get it back from Ahkmenrah's resurrected brother Kahmunrah and some other villainous exhibits, including Ivan the Terrible and Al Capone.

Night at the Museum: Secret of the Tomb (2014) - Five years after the last film, Larry learns that the tablet's of magic is failing and that the figures will permanently return to their former state. Larry and friends travel to a fictional British Museum to undo the curse aided by Ahkmenrah's parents and Sir Lancelot of Camelot.

We didn't binge-watch these films, but enjoyed them over several nights. As they're a part of our DVD collection, we'll re-watch them again. (Maybe one day we'll spend a night at the museum as there's now an adult sleepover program . Until then, the museum brunch was wonderful as was the visit.) 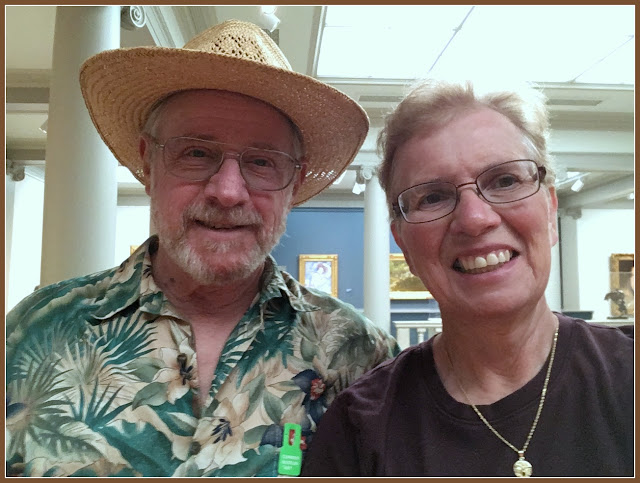 I really loved those Night at the Museum movies. They were so beautifully done. :)

I love that silver twrily thingy.. truly I do. and the cowboy statue also..

Thank you so much for the trip to the museum. I loved seeing everything. It has been quite awhile since I was at the Philadelphia Museum of Art. I have to make plans to go. You have inspired me.

Although I liked some pieces more than others I enjoyed seeing the artwork in the museum. The Night At The Museum movies are always fun to watch.

Wonderful review of the museum and enjoyed the photos. And that movie is great. Greetings!

I prefer the Sargent painting. I get why Picasso is considered art, but he's never done anything for me!

The Monets are beautiful!

The brunch must have been fabulous. Glad you had a good time. I don't really care for cubism.

This does sound like a great time. Something I would love to do.

You gave us a fairly docent /wink wink/ tour.

Great museum and very interesting exhibits. I also have the three movies in my collection. They were fun to watch.

It is years since I visited a museum, so I enjoyed your post (and pictures).

Your trip to the museum sounds like a lot of fun. This is my kind of entertainment. I've seen the first of the museum movies, but not the sequels.

Loved the movies, they are hilarious. - Museums are certainly interesting. Art is a strange thing because what one person finds fascinating another finds it quite strange. I agree about those weird looking wire and light pieces. So not my taste.