Grenville is a Ham

Sure, he's a funny guy and all, but the "ham" in this post title refers to his renewed interest in amateur (ham) radio. And, it's no longer about learning Morse code.

For years, amateur radio operators were required by international agreement to demonstrate Morse code proficiency to use frequencies below 30 MHz. In 2003, the World Radio Communications conference (WRC) meeting in Switzerland, voted to allow member countries of the International Telecommunications Union to eliminate Morse code testing if they so wished.
In late 2006, the U.S. Federal Communications Commission (FCC) eliminated Morse code testing requirements for American Amateur Radio License applicants, which took effect in February 2007. Eliminating this requirement has occurred in other countries and boosted the number of worldwide amateur operators. 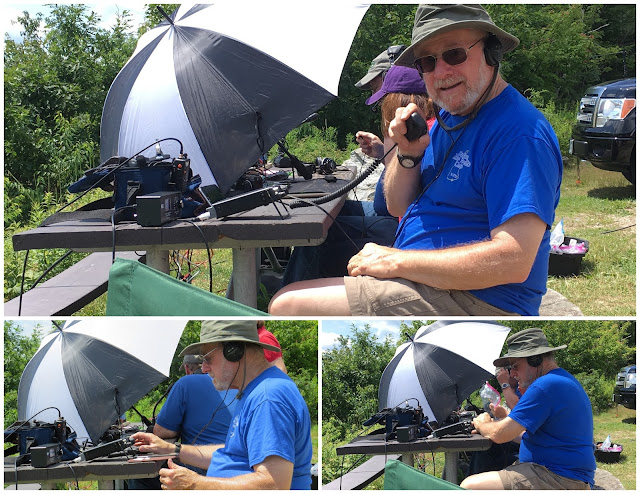 There's still a testing requirement to obtain an operator's license, and now proficiency is determined by a written exam. A few months ago, after studying for it, Grenville passed and obtained a technician license, which is needed to transmit on the airwaves. No license is needed to purchase equipment and to listen (monitor) the airwaves.

But what fun would that be? 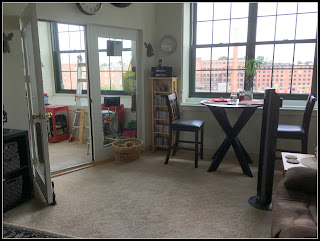 Grenville's ham radio equipment is set up on the sun porch in our apartment which is on the highest floor (5th) of a former textile mill and faces the Nashua River.

He's not outside, which wouldn't be a good place for sensitive equipment. I should explain that the sun porch is a misnomer (called that by management). It's enclosed within the building and separated from the living room by a door as shown here.

When we lived in Virginia, Grenville had this entire workshop to tinker in, so this space is somewhat challenging in its limitations. 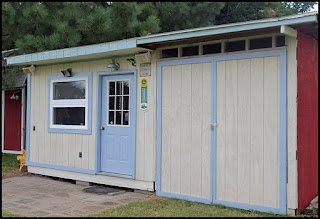 Despite that, Grenville has managed to rig a few antennas in his "work" area. The one on the right appears grainy as it's outside behind the window screen. The one that he's standing next to was hand-built from pieces of a TV antenna that was formerly in the attic of our VA home. The lights in the bottom left photo are not part of the antenna which is rigged above them. 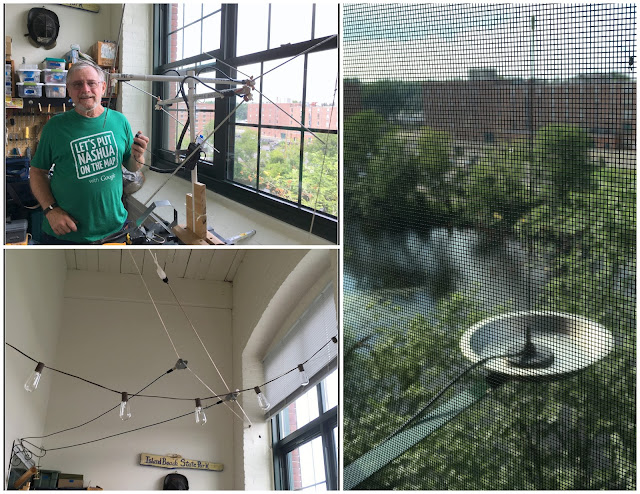 Admittedly, it's currently a bit overcrowded in his work space, but he's telling me that it's still in the "organizational" stages. (As long as he leaves the futon out there clear of anything so I can stretch out and read, it's all good.) 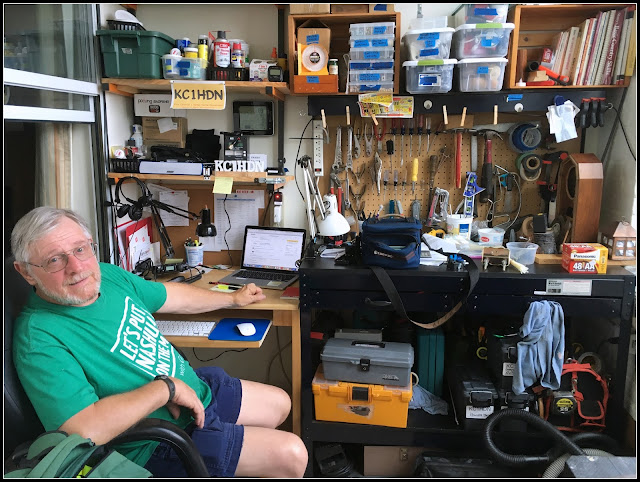 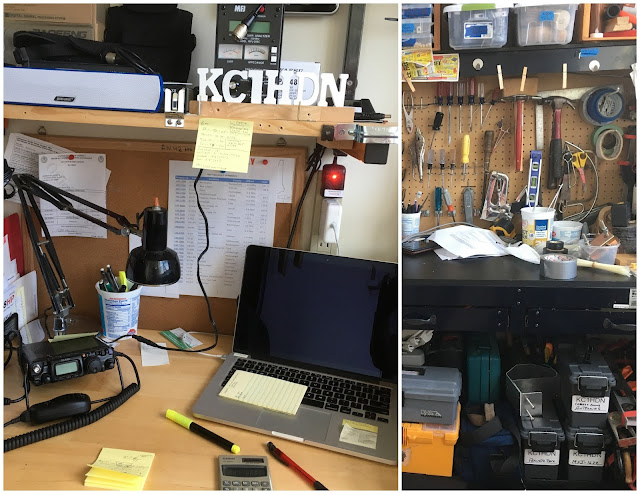 A major advantage of ham radio over other forms of modern communication is that when power, cell phone and Internet services go down, a battery-powered amateur radio and portable antenna can provide a crucial link to the outside world. Which is really something to think about.

Some facilities are considering it as reliable backup communications in a crises. Emory HealthCare (Atlanta, GA) is among a number of hospital systems to adopt ham radio. This is a direct result of Hurricane Katrina which left some Gulf Coast medical centers isolated from the outside world when landlines and cell towers failed. Also, the Georgia Emergency Management Agency (GEMA) has set up a permanent ham radio station in its command center.

Recently, I accompanied Grenville to Rollins State Park in Warner, NH, where he and other members of the Nashua Area Radio Club conducted a Summits on the Air (SOTA) event. 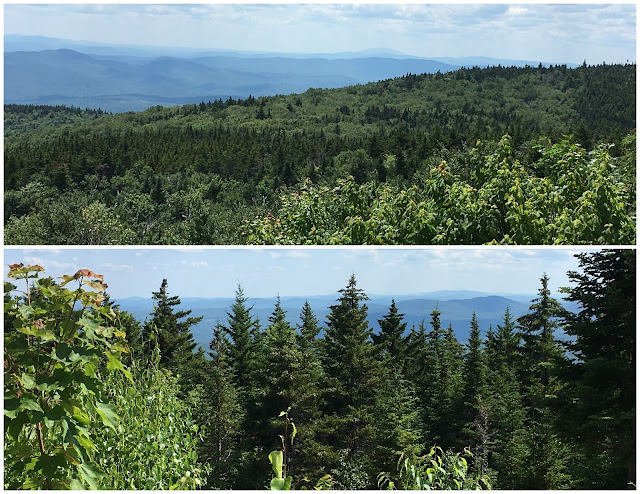 SOTA is an amateur radio operating program that started in Great Britain and later in the U.S. and is now known worldwide. The purpose is to encourage licensed amateur radio operators to operate temporarily from the summits of hills and mountains. Grenville and several others set up their equipment in a parking area and made contact with operators in several nearby states. (This was his first SOTA. Can you tell how excited he was?) 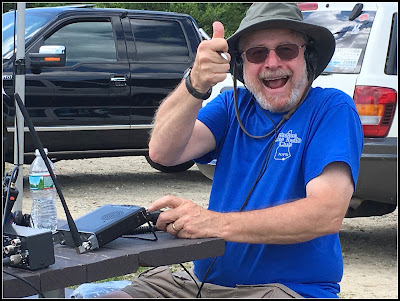 While the radio operators were busy having fun, I tried out some panoramic shots using my cell phone, which I don't do often. It was a bit hazy and trees "blocked" the view somewhat, but otherwise it was a beautiful scene.

The umbrella on the right side of this photo is where the radio equipment was set up.

Based on the good time he had, Grenville is already planning to go on future SOTA events in months to come. (I'll go along too for the scenic views.) 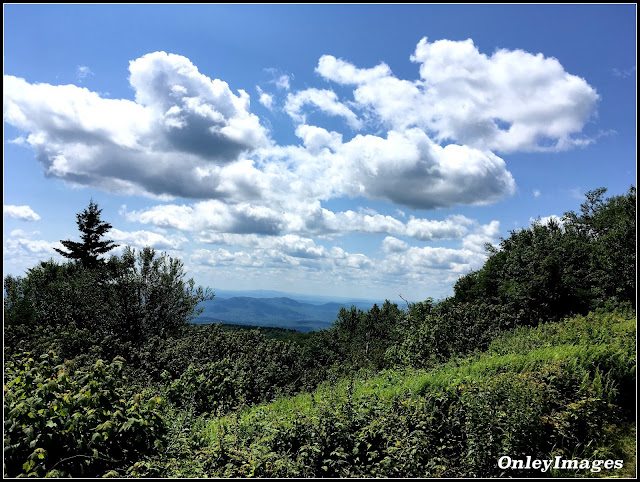 I am glad to hear ham radios are still around, we may need them someday when everything techy crashes... and people will not remember how to use them. bob never had a ham radio, but we had a CB home base and a cb in every car/truck. we don't now but we did for many years. I hope CB are still out there to use also. very interesting post

My sister in law was a certified ham radio operator. She died in 2016. Good to see how enthusiastic your husband is about his hobby.

When I was a child one of our neighbors had a ham radio. He would let us talk with kids in England and we were absolutely entranced. What a nice man to share with us although he did have to set limits. Hopefully your grandchildren can have that experience now.

That sounds like a nice hobby - I have a friend who is involved in that, too.

And good to know about Emory Health Care - that's in my neck of the woods!

I believe he will have some fantastic adventures "hamming it up". The scenery you shared is so beautiful.

Congratulations on the radio license. Ham radio operators have a lot of fun and have a strong attachment to the hobby.

I'm sure it's a fun hobby, and the occasional views work for you too.

This sounds like a lot of fun! Also, a messy work space is the sign of intelligence! That's what I tell myself :)

I've got an uncle who likes doing that.

That's a neat hobby to have and an important form of communication in time of emergency too!