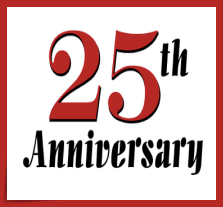 Yes, today is a special day and once again we're celebrating and on a getaway, once again.
It's not our wedding anniversary as that's not until August when the number will be 22 years.
Today, we celebrate the quarter century since our first date on May 16, 1997 in our home state of NJ. This date has been noted in posts dating back to 2010, the year we started blogging. (Last year's post had a few the way we were photos, so none here.) As often told, we met online through an obsolete dating site, that was nothing like those now. We emailed for months—no photos or calls and only spoke by phone the night before our first meet-up, no phone texting back then then.
We compare our getting to know you process like those exchanges shown between the couple Kathleen (Meg Ryan) and Joe (Tom Hanks) in the 1998 film,You've Got Mail. The difference is that our meet-up was a year before the film's release. 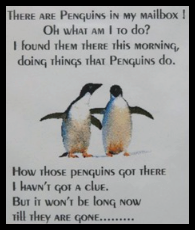 Our emails included exchanging this ecard back and forth. It would show up in one of our morning mails and be returned to the other by evening. The inside of the card included the line, I’m sending them back to you…and so we did, quite often.
We celebrate the date by spending it someplace different each year and usually dining out for lunch or dinner, sometimes both.  Special occasions only happen once a year, after all. In past years, we've planned getaways around the date in different locations as much as possible. The past couple of years, our travel was restricted because of we all know what and we stayed within New England.
It's quite often, the little things in life, like a date that only you or someone else remembers. These are what make remembering celebrations that we enjoy, so special, especially as we're the only ones who do.
And, this year, our celebration getaway is in Atlantic Beach, NC, where Grenville is so happy overjoyed to feel the sand between his toes. He grew up spending summers at the NJ shore. While I'm not really a sun and sand fan, I always appreciate the beauty of sand and surf. 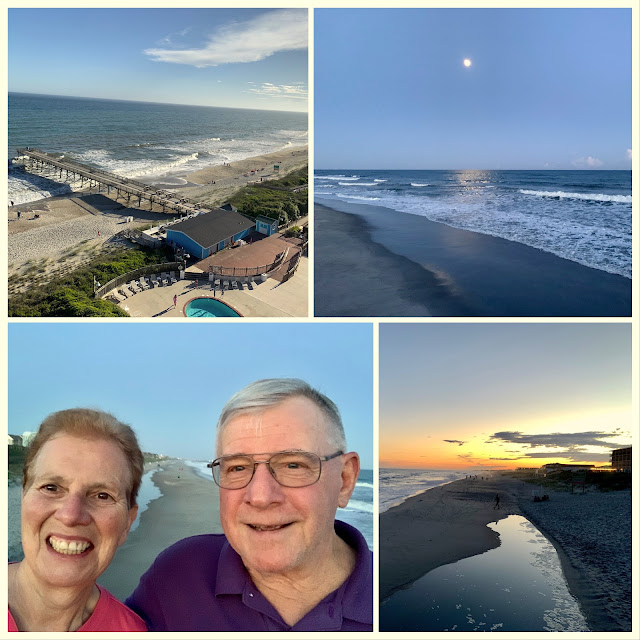 A bonus this year was that we had a front and center viewing for last night's total lunar eclipse from the small balcony of our oceanfront hotel room. This happened since the sunlight shining directly onto Earth passed through the atmosphere and was projected onto the moon, producing a red tone during the eclipse and it's why a lunar eclipse is referred to as a blood moon. 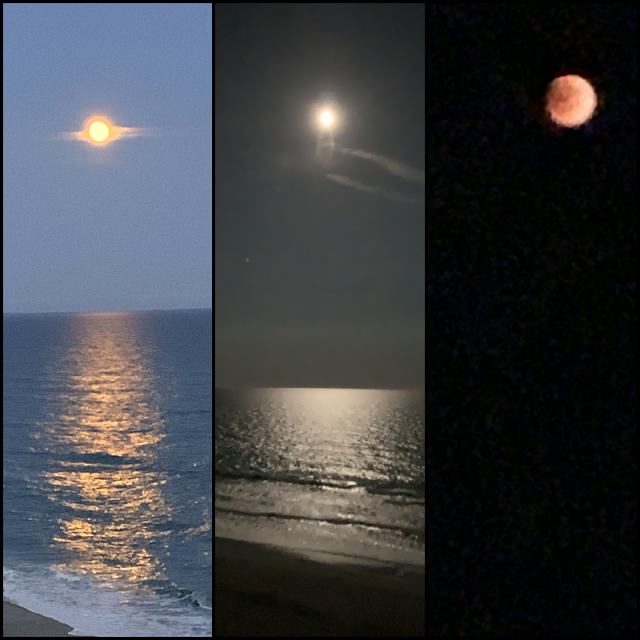 Unfortunately, my digital travel camera has a very limited zoom (4X) and handholding the cell phone didn't produce any noteworthy images. However unsuccessfully, I tried as shown above. 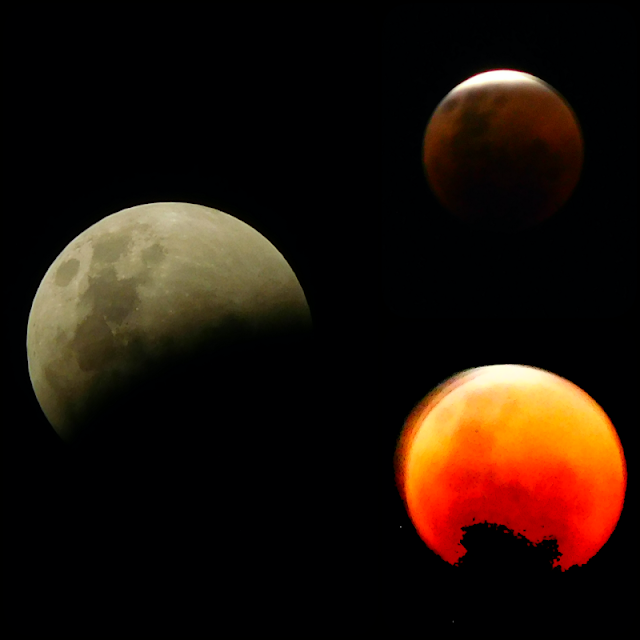 However, Grenville had somewhat better results with his small and longer zoom digital camera as shown above. Just being able to see this sight was a special treat and we watched it unfold from roughly 10:30 until midnight. Ironically, If we had been home in Nashua, NH, we would have missed it entirely. Neighbors told us that clouds and rain obstructed any viewings. That makes this anniversary getaway even more memorable since we were in a great place to see it firsthand. After all it's really all about location, location, location, isn't it?
About two lunar eclipses occur each year, and the next total lunar eclipse will occur in November 2022. Most likely, we will be in NH and hopefully the weather will cooperate. 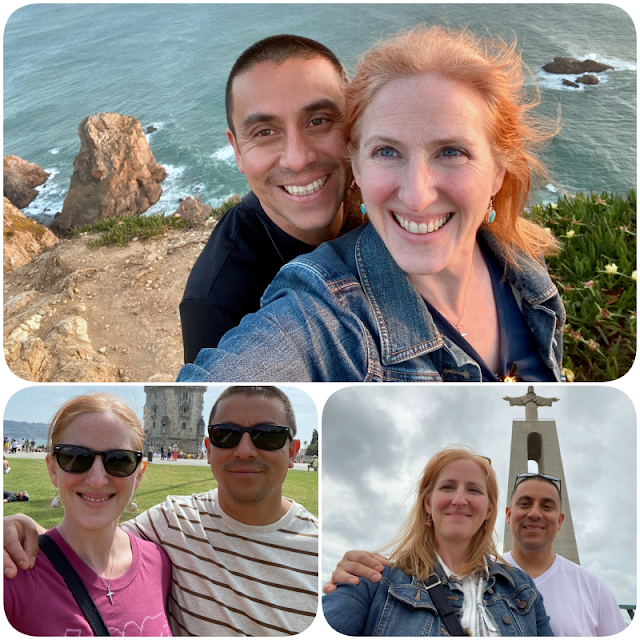 Also, as of this year, we will have another reason to recall this date. That's because, today, Grenville's oldest daughter, Shannon, and long-time boyfriend, Harlan, will announce their engagement. They are currently vacationing in Portugal and Spain and sent these photos.
How about you — any special dates, anniversary or otherwise, that you celebrate annually?
(Speaking of special dates, congrats to fellow blogger David and wife, Miriam, who  celebrated their 20th wedding anniversary  & more on Friday the 13th, a lucky day for them.)
Posted by Beatrice P. Boyd at 7:00 AM

Enjoy your time at the seashore! Congratulations on your 25th anniversary of when you met up.

We both love beaches, Happy 25th and have fun. Congratulations to the happy couple in Portugal.

Ah, what a great celebratory event you have! I just posted about recovering in health from an event. So now I think I should celebrate. Will have to put my thinking cap on!

We don’t really celebrate it anymore, but do always remember the day we met at a college end of year party in May. It was 38 years for us a few weeks ago. Congrats on your ‘silver’ anniversary of the day!

Happy 25th Anniversary! Roger and I celebrate the anniversary of the night we met. It was New Year's Eve, when we both broke with our traditions of not celebrating or leaving the house at all and went to a party. We danced together at midnight 1988-89!

That's pretty cool. No, I have never celebrated those sorts of dates because I don't remember them to begin with. Glad that you have honored the day and warm congrats to the young couple.

How exciting!! And a lunar eclipse the night before to help you remember this particular date! I love that you celebrate the date you actually met! That is really really sweet. Today would be my parents' 80th wedding anniversary! I just shared a post about it today, updated from an older post. I hope you are having a wonderful time at the beach! And congratulations to your kids. Sounds like they are on a trip of a lifetime too! Very delightful post today! Thank you for sharing your special day with us!

Happy Anniversary. Congratulations on the daughter's upcoming marriage. I hope you get to celebrate a 50th anniversary too. Hugs, Edna B.

I think it's so sweet that you celebrate your first date - and I like the unique way that you met and got to know each other.

I had no idea that there was a lunar eclipse. I used to take great interest in astronomical things. Unfortunately, now that I live in a forest, and the Tennessee skies are often cloudy, it's nearly impossible to enjoy seeing the night sky.

I think you eclipse photos are great.

A first date...what a lovely thing to celebrate! Glad you're enjoying the beauty of sand and surf. I don't enjoy the summer heat and laying on a beach, or even much swimming in the ocean...but do enjoy other things about beach visits.
The beautiful glow of the full moon was in view for a little while, but by eclipse time there were too many clouds so we missed that part of it. Glad you got to experience it.
An engagement, how wonderful. Our son and his new wife just got back from their honeymoon. Good times.
~Mary

Geez I can't remember the first time I went on a date with my partner, it was so long ago. I was 18.

Congratulations to you both! Here's to many more celebrations!

You two know how to have a good time! A great place to celebrate and thanks for the fantastic eclipse pictures -- we stayed up late to watch it (rare for a morning person like me) and we had a great view from our dock. But my pictures were not on a par with either yours or your hubby's. Enjoy the rest of your getaway and thanks for sharing the joy!

Congrats to you and also to Shannon and Harlan. I'm glad you were able to get away to enjoy this important day. Have fun at the beach. hugs-Erika

First date is well worth celebrating. we do the same thing. That date is New Yea's Eve.

Congratulations to the couple and I like your photos.

How sweet that you celebrate the anniversary of your first date!

Congrats to you both!


Here's to many more celebrations!

We met, got married and bought our house on a Friday the 13th, so we always remember that when it comes around, but I'd hardly call it a celebration. I know it sounds hokey, but we celebrate every day.

I just noticed your note at the bottom of your post, Beatrice. I have no idea how I missed it the first time. Thanks for the shout out!

Lovely post.
Congratulations on your 25th anniversary of when you met up :)

Not very good with dates in the first place but that is sweet that you celebrate your first date. I think the way you met is just magical. You got to know each other's insides first and that is what really matters. ;)

I didn't even know there was a lunar eclipse. Was cloudy here regardless. Have a great week. :)

What a wonderful way to celebrate! Love your photos.....always! Have a wonderful time, stay safe

Happy Anniversary! I believe the eclipse is a good sign!

Happy Anniversary! In so many ways, the first time we meet is the most important anniversary to celebrate. I've seen a similar lunar eclipse, it was spectacular and I am glad you were able to enjoy this, too.

I remember we met in May 1977, but not the exact date. LOL You two are amazing! We got married on June 28, 1980. We always celebrate our wedding anniversary.

What a wonderful place to celebrate an anniversary. Congrats to 25 yrs since your first date. And congratulations to your daughter on her engagement!
Wishing you a wonderful weekend!

I'd say a first date is definitely a day worth celebrating! Happy First Date!