Correction, Grenville's got a nearly new sleigh SUV ride.
While Santa didn't bring it, Grenville has a Jeep Grand Cherokee (above) in the perfect seasonal color. The manufacturer lists the color as red, to us it's more like burgundy.
While we'd considered getting a vehicle to replace one of our older Jeeps (14 and 17 years old respectively), we weren't planning to do so before year end. As you can tell by the age of our cars, we keep them longer than most and perform regular maintenance to do that. Aside from being broken in older, both had both passed 2021 state inspections with no mechanical issues.
The downside, of course, is that as older vehicles, both lacked newer safety features which was  a concern to some younger family members. It's no surprise that we enjoy road trips and longer ones are coming up this month and in early 2022 having a newer and safer vehicle is admittedly more reassuring now.
So what happened to hurry up buy now decision ?
Last week, the driver's side window on the 2004 Grand Cherokee (above) wouldn't go up. After opening and closing slamming the door and uttering a few appropriate words (insert your own choices) the window went up, but wouldn't go down again. We use an electronic pass to access  underground parking at the mill apts, so not being able to lower the window was somewhat inconvenient a real pain. Unfortunately, this wasn't the first time this failure has happened, previous repairs had corrected similar issues. It seems that while the car's engine was still functioning, some of its parts were aging faster than others.
As we planned to postpone buying a car, Grenville booked a service appointment at the local Jeep dealership. The bad news was no available spots for well over a week, so he decided to search their online used vehicles inventory, found one, and booked a test drive for last Friday. As anyone looking to purchase a car knows firsthand, it's a process of finding one, then negotiating haggling for the best price. Earlier, we'd decided that a replacement would not be new, but a newer model with low mileage. Despite media reports of shortages, they can be found. This one ticked off all our decision boxes perfectly. Grenville's newer ride 2019 Grand Cherokee was in great condition with under 21,000 miles. The downside of a newer vehicle is so many bells and whistles compared to the previous model. Even Santa would have quite a time mastering all the available options. 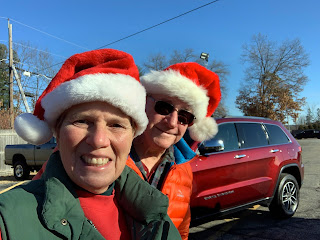 This SUV will get a long test drive soon as we are heading out on a pre-Christmas road trip to visit family  in 3 states (PA, NJ, RI). If repairs to the 2004 Jeep could not be completed, the backup plan was to use my 2007 Jeep Liberty for the trip. The downside is that it's smaller and we are transporting luggage and packages. Now, we have more than enough room.
Yes, we donned holiday colors and hats when picking up the car this weekend.
The older Jeep was traded in "as is" and the window was still non-functioning when it was dropped off. It was a trade-in and the dealership was made aware of its issues.
Posted by Beatrice P. Boyd at 7:00 AM

I wonder how soon it will be before we are into self drive cars? If ever I get another car (the one I have now is only two years old) it will either be electric or self drive. Self drive would be perfect!

Enjoy the car! Have a safe ride!

Congrats! A new car is exciting. We are like you and keep cars quite awhile, but I've never had one quite that long. My last car I had 11 years and when it hit 275,000 miles I figured it was better to look for a new one. It sounds like you have some on the road time coming up so this will be great for that. I'm glad Santa came a little bit early for you. Happy new week. Hugs-Erika

You should be set for a long time now. Enjoy your new ride, especially with longer trips coming up. And congrats on the colour. Our first car was red, and I wish we had another, but it hasn't worked out that way.

What a beauty! Wishing you and Grenville many happy and safe miles spent enjoying your new to you SUV.

we are in your situation, 2004 GMC pickup for bob and 2007 Kia Sorennto for me.. glad you found one you love and just in time for your tri state trip...its beautiful.. stay safe and have fun

Well, it’s exciting getting a new vehicle, especially in your case since it’s been a number of years since you took the plunge. I can identify with you being overwhelmed with all the bells and whistles. When I bought my car 5 years ago I was excited about them at first but I have to admit I don’t use them at all. Just give me cruise control and I am happy. Enjoy it and your travels!❤️

That’s great! I’ve heard about the car buying issues. My daughter had a tough time finding a Honda minivan over the summer, knowing that they would soon be using 3 car seats. I think they got the only one available in the state at that time, so no negotiating. Glad you guys got it done before your trip. Safe travels!

That new car looks perfect for a holiday journey. I love that you wore your holiday hats when you went to pick it up. You two are so cute!!

Sounds like fate was in your favor and you got a good deal. Our SUV is a 2012 model but doing fine. We took a 250 mile round trip drive on Friday to the White Mountains. Pictures very soon. It was good to get away if only for a day. We are headed to Ogunquit, ME after Christmas for a 3 night get away.

Your car will be perfect for your needs. We recently changed our car which will be economical to maintain and run and is red! Enjoy your car and your trip!

It is simply gorgeous! I like Jeeps too. They seem to last longer than some of the other brands.

It is a beautiful color. We have a red Hyundai Tuscon that we bought on July 8. We just love it.

I love your cranberry red Grand Cherokee. Cute photos with the Santa hats!

Use it in good health! I'm so accustomed to driving old cars, I'd probably keel over if I ever got behind the wheel of a new set of wheels.

How nice! My sister was in the same situation recently. She also found what she was looking for and is pleased with her purchase. Yay for two good success stories when all the rage is otherwise. Happy travels!

That's great! It looks very nice. Always fun and exciting to get a new vehicle. I also was happy to get the new safety features, and we also keep ours until they get very old. When we start having to pay for major repairs, then we see the writing on the wall. So, enjoy your new car and may your journeys be happy ones.

There always comes a time when the best decision is to go much newer. And you celebrated too.

Red (or burgundy) cars are my favorite. Enjoy! :)

Pretty snappy! And you look beautifully attired to take her out for a spin! Well done -- a fine choice!

The red Jeep demands attention and you two are going to give it a great trial ride. I like the color and also the design of it. You two look great with your stocking hats and the Jeep.

Hi Dorothy, Nice newer ride! Love the color... We finally gave up on our 2005 Avalon this past May and went with a new Subaru mid-size SUV. I was stunned to learn that it gets better mileage than my 2014 Hyundai Sonata and the insurance costs less for the new car than for the older car! Its all about the safety items that are built in to the new cars. Heck, we've never learned all the applications for the Sonata and for sure we'll never figure this one out! Take Care, Big Daddy Dave

Enjoy your new car! We loved all the new features, when we upgraded our old car about 5 years ago. My favorite new feature — heated seats :). Remember we keep our cars for a long time too. Our car is only almost 5 years old.I suspect we will be looking at hybrid or all electric, when we go car shopping.

Your new car is super! Grenville will need a new jacket to match it. I like that shade of red for a car. It's elegant. You have a super day, hugs, Edna B.

Enjoy your new car, she's a beauty. Lovely photos of you with your Santa hats :-)

I like your new ride! Great color, too. Congrats!
A safer vehicle will certainly be appreciated as you head out on more road trips. Maybe you'll see me wave as I pass by you on some NJ highway in our travels this month. I'll be the one yelling a few more of those appropriate for traffic words as I fight my way to the craft store by the mall. Gotta get lots of art supplies for the grands! haha

I like your new car, it's a lovely colour.

Hopefully my little car will keep up doing the good work it does. I don't travel far...or often...only to my local shops and back home again.

I can't afford a new or new second-hand car...so fingers and tyres crossed! :)

It looks a beaut sled. Hope you have a great trip. Sorry That I haven't been visiting for a while.

Love the photo of you two with the santa hats

We've never bought a car new. They're so much pricier than used cars and depreciate so rapidly from the purchase price. We've had great value from used cars that have lasted up to 16 years with very few major repairs. Good luck with your big road trip!

congrats on your new car! I just bought a 2018 Rav4 with 4500 miles from a private person. She had to go in a nursing home and the estate had to go through the courts so it sat for a year! I had an oil change and a going over runs great even has the new car smell.
Cathy