Holiday decorations abound both outside and inside our apartment. knowing that we would be out-of-state for pre-Christmas family visits to three states meant getting things done before we left, including this post. 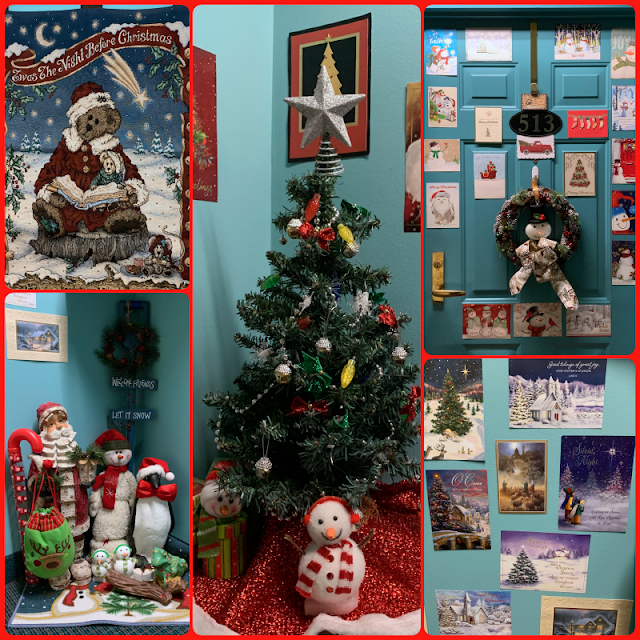 These decorations are outside our apartment entry. Many remain the same from last year with a couple of extras added in. Cards on the door and wall are representative of those received last year, so they've been enjoyed for 2 years. Cards received this year will follow the same tradition. 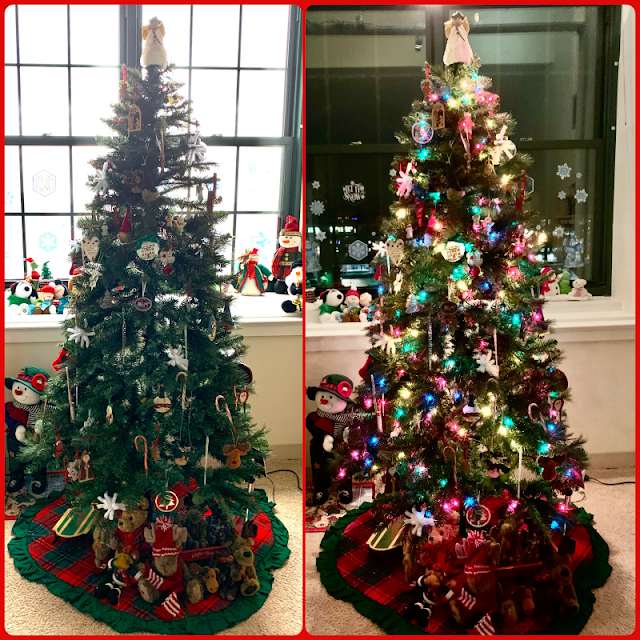 Inside the apartment, the tree bought last year was set up. In 2020, we had planned for a fresh-cut pine tree, but that was the year management issued a permanent ban on such greenery (bah humbug). Luckily, we were out shopping and bought this pre-lit on sale for under $40. While on the slender side, it works well in a small space. Someday, we'll need to cut back our ornaments collection or not buy new ones, as we ran out of space to hang some. 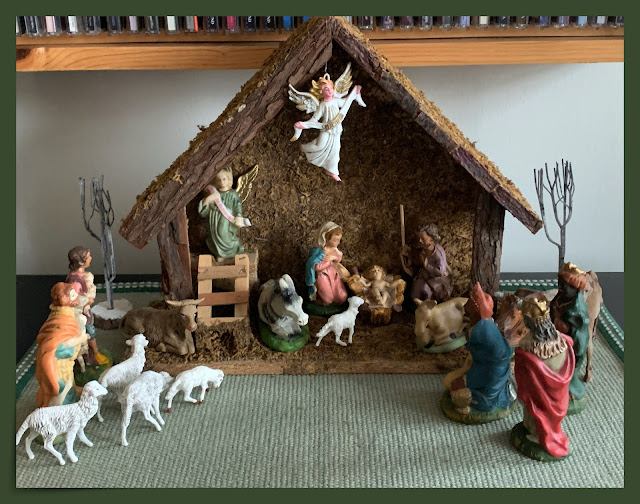 A Nativity setup is always included in our holiday displays. This one is extra special as the figures are from my late mother's set; the manger is from a previous set of mine. Oddly, neither set had any of the sheep shown, all of these, an oxen and camel (behind the Three Wise Men) were purchased many years ago at a Hallmark store in NJ. In years since, I've never found similar pieces sold in stores. (Unlike the figures, these added animals are made of plastic, but treasured just the same.) 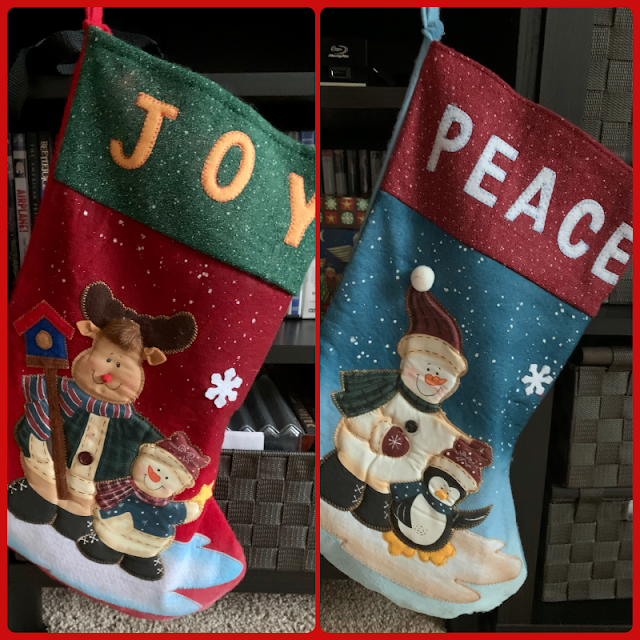 Our carefully hung stockings are not hung by the chimney with care, mainly because we don't have a fireplace here. Instead, these are hung on the media cabinet, but with care just the same. The designs had to include penguins, snowman and a moose, but there's no frog. 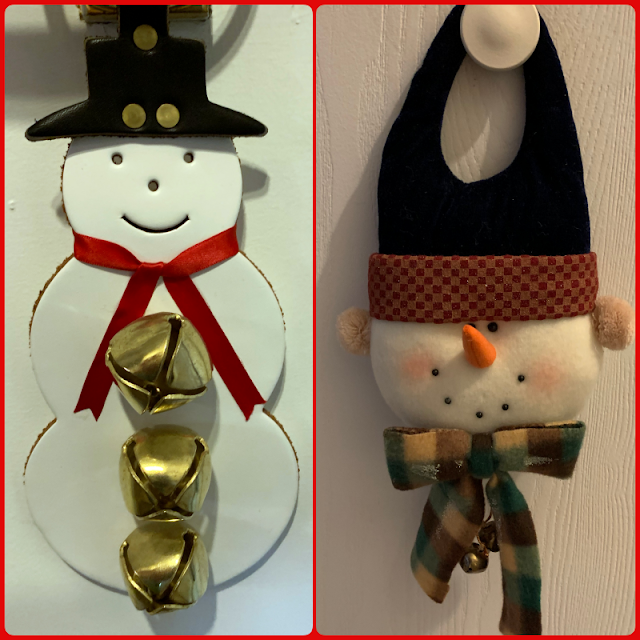 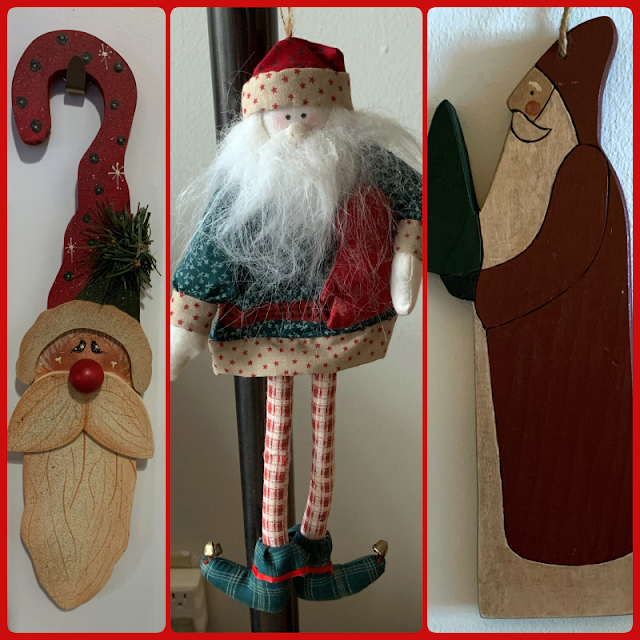 Snowmen always hang around the apartment and these top ones are on available door handles. Assorted Santas hang on walls, doors, and even a living room lamp pole. 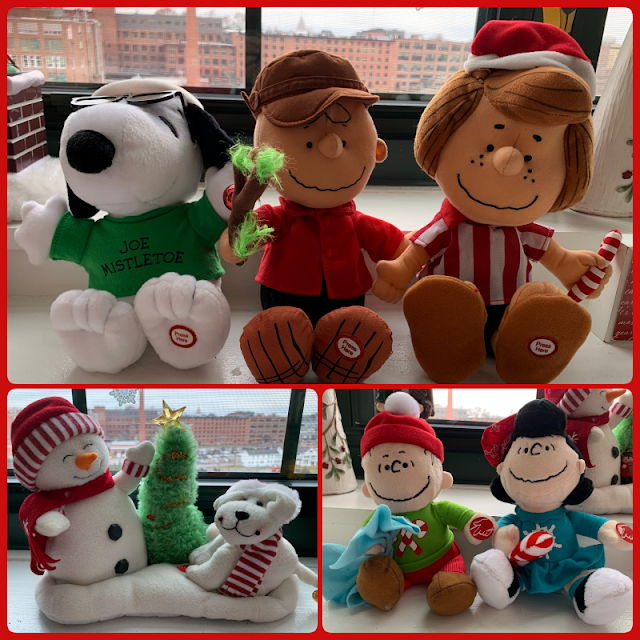 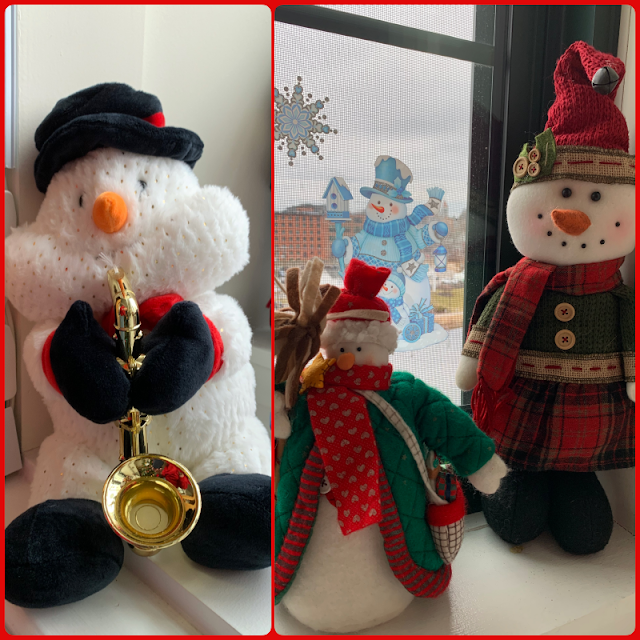 This year, Charlie Brown and his friends have river view seating on the window sill. They've been joined by some snowmen, one entertains with a saxophone (when the switch is on). 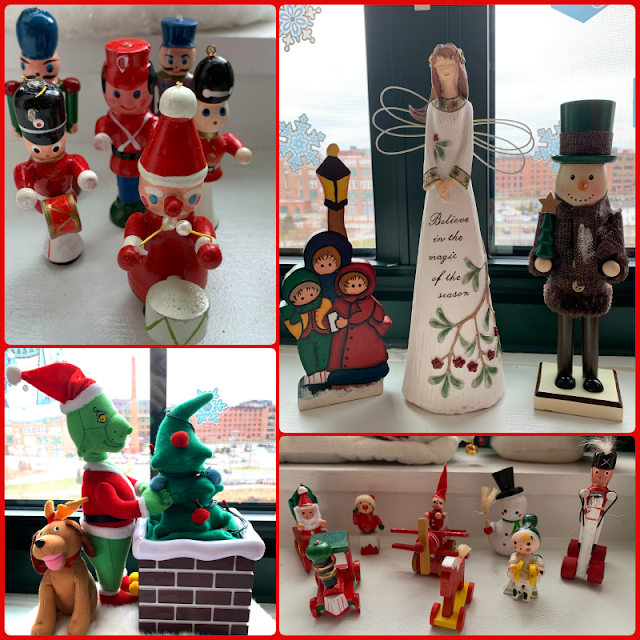 Assorted wooden figures, include a marching soldier band led by Santa and wooden toys. These are are set a distance from the Grinch who's already purloined a Christmas tree while Max stands guard. 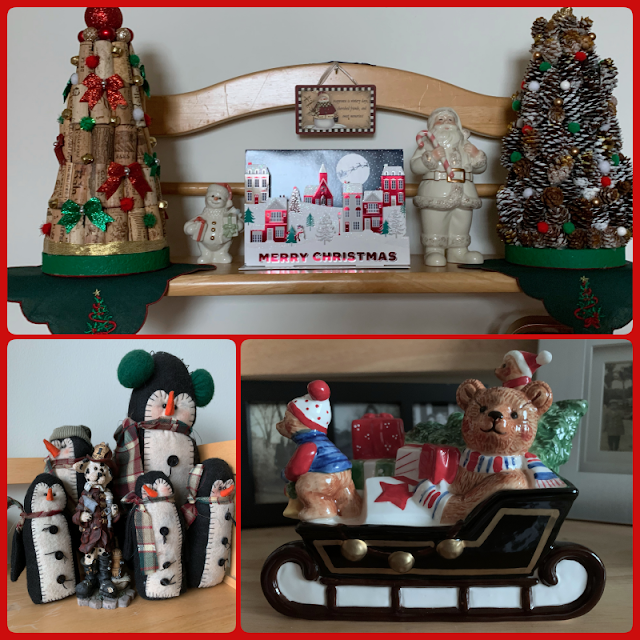 Last year, when there was a lot of inside time, I made the cork and pine cone trees shown above. Materials used were very inexpensive: corks donated by friends, harvested pine cones and Dollar Tree add-ons. Not only were these fun projects, but I learned how much fun one can have with a glue gun.
The penguin family in the lower left was purchased so many years ago that we can't recall where, but they've traveled from NJ and VA to NH. The bear sled is a music box, a treasured gift from Ann, a NJ friend, who passed away. It's wound and played every year in her memory. 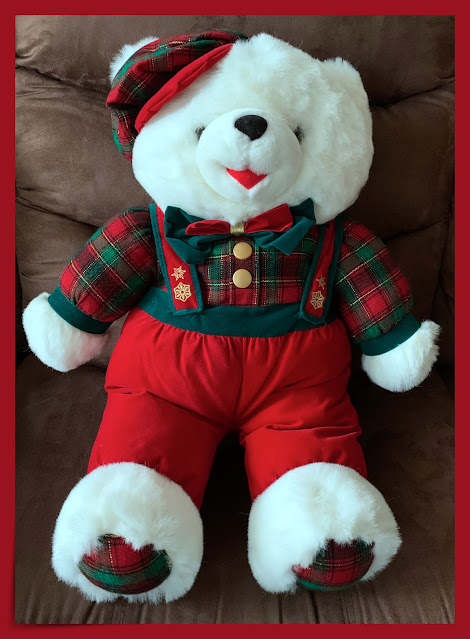 Do you have a holiday favorite?  Mine is this gaily garbed bear given as a holiday gift by my brother years ago. It has sat in my car, on the couch and under the tree in every home I've/we've lived since then. We've named it Thistle Hair, the Christmas Bear (from the song by country group Alabama). Its value is minimal, but the memory it evokes each holiday season is priceless. 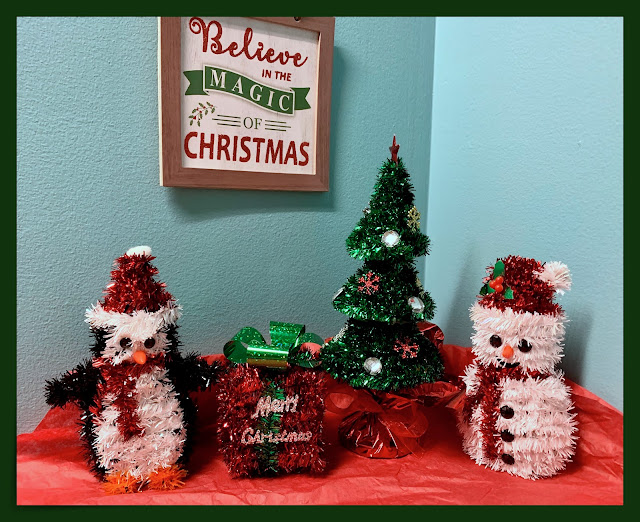 These decorations reside on our neighbor's shelf with help from myself and Dollar Tree. The young neighbors who live in the apt didn't have any holiday decos up, so in the spirit of the season, these few items were added. It's amazingly simple (and inexpensive) to add some holiday decor. (The neighbors did not seem to object to the additions, which remained in place  when we left home.) 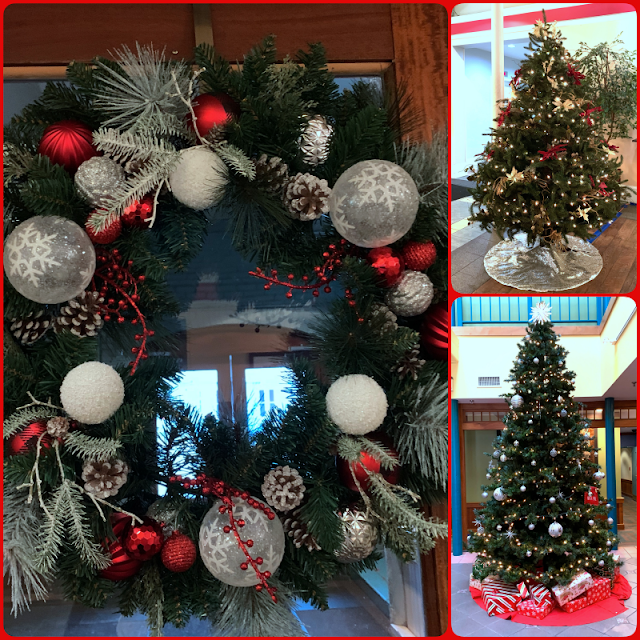 There are holiday wreaths and also decorated trees in both lobbies of the mill apartment buildings where we reside. Alas, those gaily wrapped packages cover empty boxes. 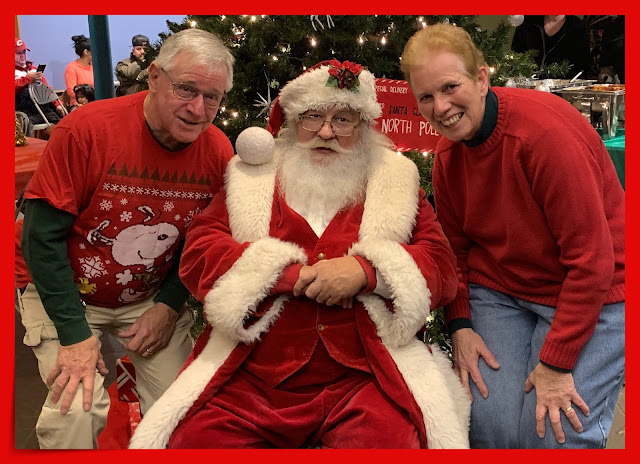 Like youngsters, we visited with Santa at the mill arts recent holiday get together.
We wanted to make sure we were on the nice list year — not taking any chances.
Posted by Beatrice P. Boyd at 7:00 AM

I had such fun visiting you this morning (virtually)! Lovely decorations and I liked the commentary as well. They all have meaning. My fav were the Charlie Brown friends. Thanks so much for good photos and sharing them all!

Your Christmas decorations are beautiful. I love the photo of Santa and you two. How nice of you to decorate a bit for your neighbors. Santa will remember this and hopefully be extra good to you. Enjoy your day, hugs, Edna B.

wow i am AMAZED with your exciting and delightful decoration inside and outside the apartment dear Dorothy :)

What a joyous and cherished spirit you are !!!

i loved and enjoyed each bit of what you have here everything i see making me part of Christmas :)

the bear gifted by your brother must be treasure for you i believe and i totally agree that such gifts play key to open the box of memories which are most wonderful part of such festivals .

i most loved the last photo and the gesture is so lovely and sweet perfect for the Christmas and perfect for entering new year :)
may God keep showering his grace and blessings upon you and all you love always my friend!
health ,peace and joy to you and family!

So fun to see your decorations! I love the Charlie Brown ones. A friend of mine gave me a musical Snoopy this year. He’s riding in his dog bowl as a sled. I love that you are using your Mom’s nativity figures. We have a small tree that we put my husband’s grandma’s wooden ornaments.

Oh I love all of your Christmas decorations Dorothy and especially the fact that you two are still having fun with the seasonal traditions. Tthe Christmas card tradition, displaying and enjoying last year's again, is a wonderful one that I had never thought of. What fun.

Your holiday decorations are so festive and beautiful! Your tree looks gorgeous - and I really like the nativity.
Have a fantastic Christmas and a wonderful road trip.
The Santa photo is great!

Oh so beautiful! I love them all!! You've really gone all out for a small apartment space, and it all looks so fun and friendly and happy! I love this time of year, and the lights and colors and memories. Love your Thistle Bear...so sweet! I hope you are having good travels to and from your family, and that you will have a wonderful Christmas back at home when you get there. Praying the weather holds up for you. Have a blessed and glorious Christmas.

Your Christmas decorations are lovely, and I love the picture of you and Patrick with Santa Claus.

Your apartment can't be too small with room for all of the decs. I think you're away already. Enjoy the season.

Hi Beatrice and Grenville... Wow! You go all out for Christmas. Very nice. With my better half in a wheelchair with a broken ankle and no family visiting...and ourselves staying home this year...our Christmas decor is very much minimalist. Our 'flat' pre-lit tree died this past year but it was idea as it took very little space. We'll need to replace it in 2022. Love the photo with Santa. When I was about 19...perhaps 20...I worked as Santa Claus in a local department store in my hometown. I have a photo of me (for some reason with a Grinch-like look on my face with 4 of my cousins sitting on my lap. They didn't recognize me which was a hoot! Travel safely... Merry Christmas and Happy New Year! Take Care, Big Daddy Dave

Your house looks great Dorothy. And I really love how you took your photo with Santa. I'm with you; you can't take too many chances. Have a great holiday! hugs-Erika

You do take the occasion seriously

What a joyful post! I've enjoyed seeing your Christmas decorations and learning about your tradition of remembering loved ones as you placed each one around your apartment. I particularly enjoyed seeing the cuddly toys and your photo of your visit to Santa. Wherever you are right now I wish you a merry Christmas season and a peaceful new year.

You've made a lovely job of your Christmas decorations - and now they are being enjoyed worldwide. Back in the 1970's my parents bought an artificial tree. I used to have the job of decorating it every year and, since they passed away, I have it in my house. I reckon I must have decorated it around 50 times now. Some of the baubles are even older than that and I believe some belonged to my grandmother.

Visiting late as ever... I really enjoy seeing your cheerful Christmas spirit, it is lovely to have a virtual wander through your apartment and admire all your decorations. I haven't displayed our nativity for a long time now, the dog assumes they are toys for him to destroy. He is a feisty creature with short legs and a determined mind, it is always surprising how he can climb onto shelves that I think are inaccessible. Have a wonderful holiday xx

Wonderful decorations! Love that photo with you and Pat with Santa :))) I hope our card has arrived by now :) In case I don’t get back before, you two have a Merry Christmas and A Very Happy New Year!

Such a lovely festive post.
I enjoyed seeing all of your decorations and love the last photograph :)

This is such a joyful post Beatrice, I have a smile on my face enjoying all your gorgeous decorations. I'm a huge fan of Charlie Brown and penguins, so they are my favourites :-) I hope you have a very happy Christmas x

I love seeing your home! The cards on the door is a delightful idea. I love your tree (and I know what you mean about not adding ornaments -- I'm in the same boat! That's why I have so many trees!) Your stuffies are darling and I am wild about your cork tree. I might have to make one of these after the holidays when I have some time to just be creative. Right now, it's day to day!

Have a very merry Christmas and a wonderful new year!

Goodness, what a plethora of Christmas decorations! Such inventiveness and originality. Glad you got to see Santa himself. But why does he have a snowball on his right shoulder?

Wow, you definitely know how to decorate for Christmas. All the memories that come back each year as you decorate are priceless. Love the photo you two had with Santa. Enjoy your holidays with family and have a wonderful and peaceful Christmas and a great start to the beginning of 2022.

Wonderful decorations inside and outside your home!
The 'finale' to your lovely post - the picture of the three in red - you, Grenville, and Santa, is awesome!
Wishing you safe travels, and Happy Holidays!

I absolutely enjoyed your decorations - so festive and beautiful.

Have a wonderful Christmas, Beatrice.

OHHH, what wonderful decorations you have!! No favorite, they are all sweet, but Charlie Brown and friends I did scan back to look at again. Ron always loved the Peanuts shows/characters. The handmade projects are fun! I did decorate a couple small gift boxes with old silk flower pieces. And also paint dotted a couple ornaments.
I'm sure you both are on the VERY NICE list!! No worries!
Merry Christmas! ~Mary

Boy, you guys go all out for Christmas!

I love all your decorations, but Thistle Hair is my favorite!