Seeing this posted sign at a public fountain in recent weeks . . . 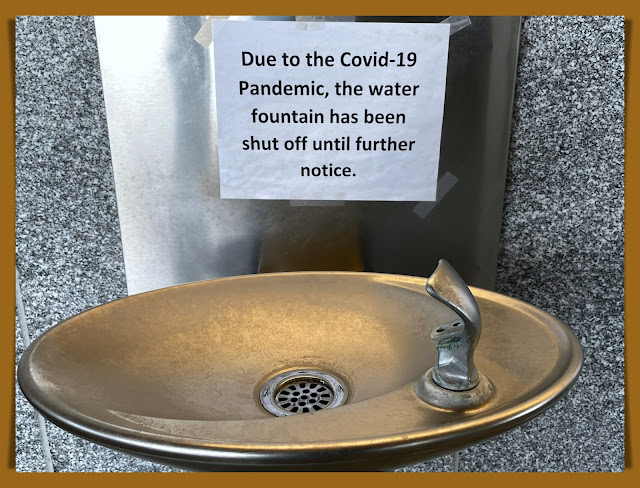 Brought to mind, the lines of a well-known poem although the reasons for no water are not the same. These lines in stanza nine are most likely the most recalled lines from the poem:
Water, water, every where,
And all the boards did shrink;
Water, water, every where,
Nor any drop to drink
Perhaps many of you knew they're from The Rime of the Ancient Mariner a poem that's been listed in many school literature courses. The folk-ballad style poem was written by English poet Samuel Taylor Coleridge in 1797-98, and was based on a friend's dream. It was published in 1798 in the first edition of Lyrical Ballads, a collaboration between Coleridge and English romantic poet William Wordsworth that helped launch the Romantic Age in English literature.
The seven-part poem recounts the experiences of the title character, a sailor who has returned from a long sea voyage and stops a man who is going to a wedding. The mariner recounts his slaying of an albatross and the resulting disasters that befell his ship and fellow sailors. As the tale progresses, the reaction of the wedding guest changes from impatience to fascination and he remains to listen to the story.
It's been many (school) years since I heard this poem. Today, nearly everything can be found online and YouTube provided a couple of excellent narrations by notable English actors. If you're interested in hearing one, just click on the applicable link:
Ian McKellen reads The Rime of the Ancient Mariner here and Richard Burton reads it here.
On behalf of myself and our family, thanks to all for your comments on the previous RI reunion post. All were read and most appreciated.
Enjoy Your Weekend, Everyone
Get together with friends for dominoes + a new recipe tryout
Posted by Beatrice P. Boyd at 7:00 AM

And when, pray tell, did William Wordsworth become an American poet?

I remember studying that poem in school. Have a super weekend!

Sincere apologies for my error about Wordsworth, which was duly noted by David, and has since been corrected.

I remember in the early days of COVID when we weren't allowed to sit on park benches. That was silly, but we've learned a lot since. Not enough, though, it seems.

Narrative poetry is a favorite of mine. I was bemused to see a sign just like that when I went to the eye doctor last week. Maybe this will be over one day.

I knew very little about "The Rime of the Ancient Mariner" so your information is appreciated.

By the way, I always thought that public drinking fountains are extremely unsanitary.

Some fountains here have reopened.

I became rather obsessed with the English Romantic poets as a result of walking in the Lake District - something which my English teachers failed to do during my time at school.

At least they had the decency to put a sign, so that people or children won't try to mess with the fountain device!

It seems reasonable to shut off the fountain during the pandemic. I wouldn't drink from it if it were on. At least not now. You have a super day, hugs, Edna B.

love your post ........currently the swimming pools are not open in the town nearest to us. They say it was because of not having the chlorine......but not sure is it is really because of the surge of covid?

Some Covid restrictions, well-meaning I'm sure, are way over the top. The risk of catching Covid from a surface or a physical object is tiny but turning off water fountains is the sort of thing that's happening. Still, if it makes some people feel safer....

We read the Ancient Mariner in junior high. I'm sure I missed a lot of the meaning, but that verse stuck with me. Have so enjoyed my New England visits this summer and Vermont left to come.

I absolutely could not use that kind of public drinking fountain now and probably never ever again. Thankfully the Kleen Kanteen water bottles we always take with us mean we always have a drop to drink! (I remember learning the poem in high school!)

Gosh, I haven't even thought about that poem since my high school English class. It's time for a revisit.

Thanks for the memory--and the information!

I remember having to study that poem at school.

An interesting photo :) and an interesting read. I didn’t know that about it being inspired by a friend’s dream. Thanks Dorothy!

The New Woman in Photography show at the Met is great. I saw most of it a few weeks ago and plan to return to slowly go what I didn't see. If you do come to New York, and want to visit the Met, please be my guest. Members get to bring a guest and I'd be happy to visit with you.

For now, until the pandemic is officially declared over, I don't think I could use that kind of public drinking fountain.

Beatrice, Will the pandemic ever end?! Around here, most water fountains are not only turned off, they are either taped over or covered with plastic bags. Take Care, Big Daddy Dave