Like many of you, I'm familiar with the 1970s hit song, Bridge Over Troubled Water by Simon & Garfunkel. Yes, I know the tune did not mean a physical bridge (part) like this one. 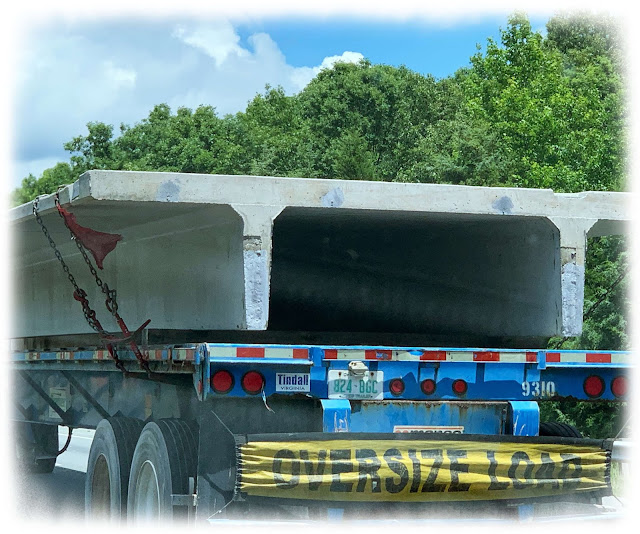 It's not a totally unfamiliar sight to see a bridge part that's not over water, but a flatbread truck traveling on the highway. This one was spotted sometime last summer as evidenced by the greenery. (Sights that make me think of odd things are always saved for future use.)
Bridge over Troubled Water was composed by American singer-songwriter Paul Simon and recorded by the Paul Simon & Art Garfunkel in January 1970 and was the title of their fifth studio album. Art Garfunkel performs lead vocals over a piano accompaniment with a strong influence of gospel music. The original studio recording used elements of Phil Spector's Wall of Sound technique and Los Angeles session musicians from the Wrecking Crew.
If it's one of your favorites, then enjoy hearing again. This is not one of my favorites, but it's a favorite of Grenville's and so many other people, perhaps more so now than ever.
Considered their signature song, the tune became the duo's biggest hit single, selling over 6 million copies. It topped the Billboard Hot 100 for six weeks, topped charts in the UK, Canada, France, and New Zealand, and was a top five hit in eight other countries. It ranked No. 48 on Rolling Stone's 500 Greatest Songs of All Time. It's one of the 20th century's most performed songs, covered by artists, like Elvis Presley, Aretha Franklin, and Johnny Cash.
The Wall of Sound is a popular music production technique Spector developed in the 1960s, in which many musicians perform the same instruments/parts in unison and the sound is then re-recorded in an echo chamber. The Wrecking Crew was a loose collective of L.A. based session musicians used for thousands of 1960s and 1970s studio recordings, including hundreds of Top 40 hits. Although the musicians were not publicly recognized/credited then, many have since become well-known, including keyboardist Leon Russell and guitarist Glen Campbell, who became popular solo acts. Drummer Hal Blaine popularized the name in a 1990 memoir, also the title of a documentary (with ads) on YouTube, The Wrecking Crew.
Another interesting and informative music documentary (available on Netflix) is the 2019 film, Echo In The Canyon. Hosted by Jakob Dylan (Bob's son) it celebrates popular music that came out of L.A.’s Laurel Canyon neighborhood in the mid-60s as folk went electric and the Byrds, the Beach Boys, Buffalo Springfield, and the Mamas and the Papas cemented the California Sound.
Enjoy Your Weekend Everyone
In Nashua, NH, it will be clear and in the 30's.
Posted by Beatrice P. Boyd at 7:00 AM

Now that is an odd sight to see driving down the highway. I'm trying to think what I would have thought of if I had seen it and took the picture I don't think it would have been Bridge Over Troubled Waters although I am familiar with it

I always loved that song. When I see those oversized loads, I just want to get out of the way!

That is a great song. We have or had a S&G cd and I have sometimes thought that it was the last good pop music every made.

Such a beautiful song. Thank you for reminding me of that music and those times.
Great image of that oversize load on the truck.

I agree, that was quite an odd sight. I sometimes save strange pictures for future use. Thanks for the info about the song. I enjoyed listening to it. You have a wonderful day, hugs, Edna B.

It's been ages since I've seen an oversized load on the road.

Beatrice, The wildest thing we've seen on the highways are those huge blades that are used for wind turbines. Stay Safe and Take Care, Big Daddy Dave

I do have that album. I don't remember where I bought it but my first late wife also owned it and when I remarried my second wife owned one too.

Whether we have been active followers of Simon and Garfunkel I think that is a song we have all heard somewhere at some point in our lives.

I loved all their songs and Paul's songs on his own, too. :)

have a great weekend
Cathy

That oversized truck was quite the sight. Bridge over troubled water is a firm favourite here. Have

Love the song, the duo and Paul's singing and creating on his own. What a big haul that piece of bridge is! So glad to hear how the musicians got to work in background pieces!

Not one of my favourite S&G songs either. The madcap English band, Half Man Half Biscuit recorded an album which they called Trouble Over Bridgewater.

We have just been catching up with you and were delayed for some time in your kitchen. We absolutely love soup and yours, together with the home baked bread looked absolutely delicious. we are sure that it tasted delicious too.

Like you, we have very clearly defined roles in our kitchen as it does not seem big enough for both of us at the same time. So, one is preparing whilst the other is creating and in that way the food comes out perfectly and we do too!

Simon and Garfunkel, such a blast from the past. rather than this song, we recall most vividly 'Mrs Robinson' from the film 'The Graduate'. It all seemed very risqué at the time, but, looking at it now, it is all rather tame. Still, the song lives on...

Bridge Over Troubled Water is a great song. I think I like Sounds of Silence a little bit better.

I remember when that song came out. It's not one of my favorite G&S tunes, but I like it well enough.

Thanks for the information about Wall of Sound and the Wrecking Crew--I never heard of the latter bunch until I read this post.

Don’t think that oversized lorry would cope in our tiny lanes. Just as well we have no rivers that need spanning lol! B x

The only oversized loads we seen here have been hauling windmills and that was 6 years ago.

The members of the Wrecking Crew were almost entirely male. The one female member was Carol Kaye, who played guitar and electric bass. She played on an estimated 10,000 recordings in a career of over 50 years.

I'm not that keen on Bridge Over Troubled Water. I prefer You've Got a Friend by Carol King or If You Need Somebody by Bonnie Raitt.

Unlike the title of the song that mentions a bridge over troubled waters, in reality we usually have a troubled bridge over water. By 'troubled' bridge I mean a bridge that is daily crossed by heavily loaded trucks which eventually turn it into a vulnerable bridge for both the trucks and the structure of the bridge itself.

I still enjoy listening to Simon and Garfunkel and "Bridge over troubled waters" actually isone of my favorites. But there are so many others -
"Sound of Silence" in particular.

Love Bridge Over Troubled Water. My favorite memory of it is a concert by Simon and Garfunkel in Central Park in the early 80's. Sweet memory!

i knew an english teacher who used the album in class, saying the lyrics were poetry.

Those over sized loads always make me nervous! I have always love Bridge Over Troubled Water! Love you post!

I still love "Bridge Over Troubled Waters"....and I still have the LP that it is part of.

I remember clearly my late mother once saying to me every time she heard the song, she thought of me.

Thanks for the memories. I loved S and G and most of their music. I have played Bridge Over Troubled Waters a LOT on my keyboard through the years.💖

I had this album and nearly wore it out playing it over and over again.

Especially back when we were full-time RVers , we used to sort of “collect” the odd things we saw going down the Highway. Huge construction beams, and the blades of those big windmills (one per flatbed) are a couple that your sighting reminded me of. I like anything by Simon and Garfunkel ... memories, from even longer ago!