A 1970s song popularized by a Canadian rock band was all about signs. In fact, it was the song title and some of you, myself included, may remember it (more on that shortly).
After recently hearing that song, it made me think of a recent road sign I had seen and snapped for future use. (As I've learned, there is always a someday use.) 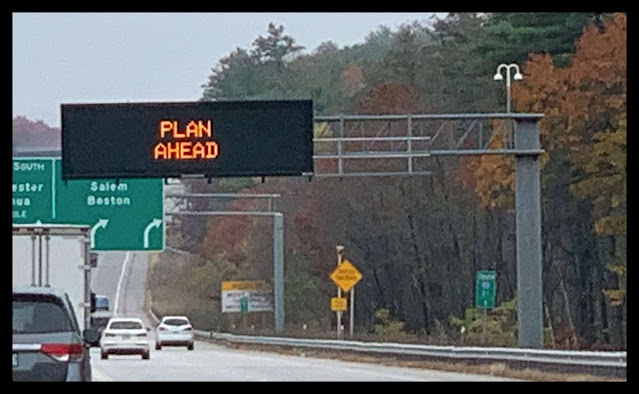 Sure enough, I found that use after seeing this car parked in an area lot. The owner apparently didn't see any plan ahead sign, as you can see. 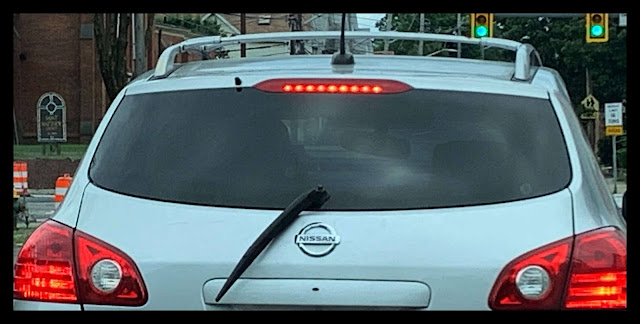 While I was familiar with the song, it wasn't a favorite. Admittedly I didn't know what group had recorded it, so here it is. Sorry, if you later an earwig of Signs playing in your head.
The song is by the Canadian rock group Five Man Electrical Band. It was written by the band's frontman (Les Emmerson) after a California road-trip on Route 66 where billboards obscured the scenery. It popularized the relatively unknown band, who recorded it for a 1970 second album, Good-byes and Butterflies. The song was first released as the B-side to an unsuccessful single. Re-released in 1971 as the A-side, it went to No. 4 in Canada and No. 3 on the U.S. Billboard Hot 100 chart. The No. 24 song for 1971, Signs received a gold record.
Enjoy Your Weekend, Everyone
It's been a rough one for so many
Posted by Beatrice P. Boyd at 7:00 AM

i am the queen of plan ahead, and in fact drive my self bonkers with my PLANNING... have not heard the song or of the band and no ear wurm, i only listen to 30 seconds to see if i had heard it, not my type of wurm

I woke up with an ear wurm... The Last Cheaters Walz..


Signs, and songs reminding us of them are always a useful thing.

That song is new to me. I think it might stick!

Beatrice, Since I mostly listen to 'oldies', I can count on hearing "Signe" on a regular basis...but I didn't know it came from a Canadian band and I'd never heard of the band either... Learned something new. My favorite sign was outside an antique shop on a back road in Georgia. It read, "We Sell Dead Peoples Stuff". Stay Safe and Take Care, Big Daddy Dave

I have friends in Texas. One just got her power back on this morning, but still no water. It's really rough there. Hopefully, all this bad weather will be gone soon. We are all ready for Spring. You have a super day, hugs, Edna B.

This is a great song with a great message.

I don't think there was ever any sign of the Five Man Electrical Band over here in the UK.

I have to admit, I've never heard of them.

I think I’ve heard that song. I’m always humored by those electric road signs. Our state has funny ones like Mask Up, Phone Down.

Planning ahead is extremely important in every aspect of life. I wish I had utilized that motto more often.... I've never heard the "sign" song, but the message is still apt today.

I remember the song. I don't remember hearing anything else by them, maybe they're a one hit band.

The view of the church on my post today was the side view facing the water.
Have a great weekend.

Oh goodness! I totally forgot about this song. Cool!

signs are indeed fun to look at and read. i haven't heard that song in years. got me smiling. thanks.

i am master of reading signs ,i like what they say and the way they stand related to situation lol

you captured this well and shared even more amusing way dear Dorothy :)

blessings to you and family!
and thank you for uplifting comments!

"Plan ahead" would be good advice for the Electric Reliability Council of Texas, after the colossal outages and the narrowly averted total collapse of the Texas electricity grid.

Yes, I do remember that song!

As always you provide us with the story behind the story and for which I am very grateful.

Good one ...I too “collect” funny signs — used to find more when we traveled all the time , but I’m pretty sure I’ve blogged all I have at least once )). No snow here in our part of Oregon, but also no vaccine for us (we’re “on the list” still.). Look forward to enjoying your next castle tour. Had fun catching up here and sorry for making this one comment in response to several of your posts I missed.

I remembered this song once I listened, but could never have remembered the title or the group without your prompt. I'm one week and a day past my second vaccination and starting to make a few plans to expand my universe. Nothing exotic, but will make an appointment for the haircut I desperately need and maybe -- not quite ready yet -- a trip to Vermont later in the spring. Yes, I'm excited just at the thought. Take care!

I remember that song Dorothy! :) I'm a planner and I don't feel comfy unless I have things all set out right for me! Those rear windshield wipers...I never had one before I bought my SUV...they do come in handy though! :)